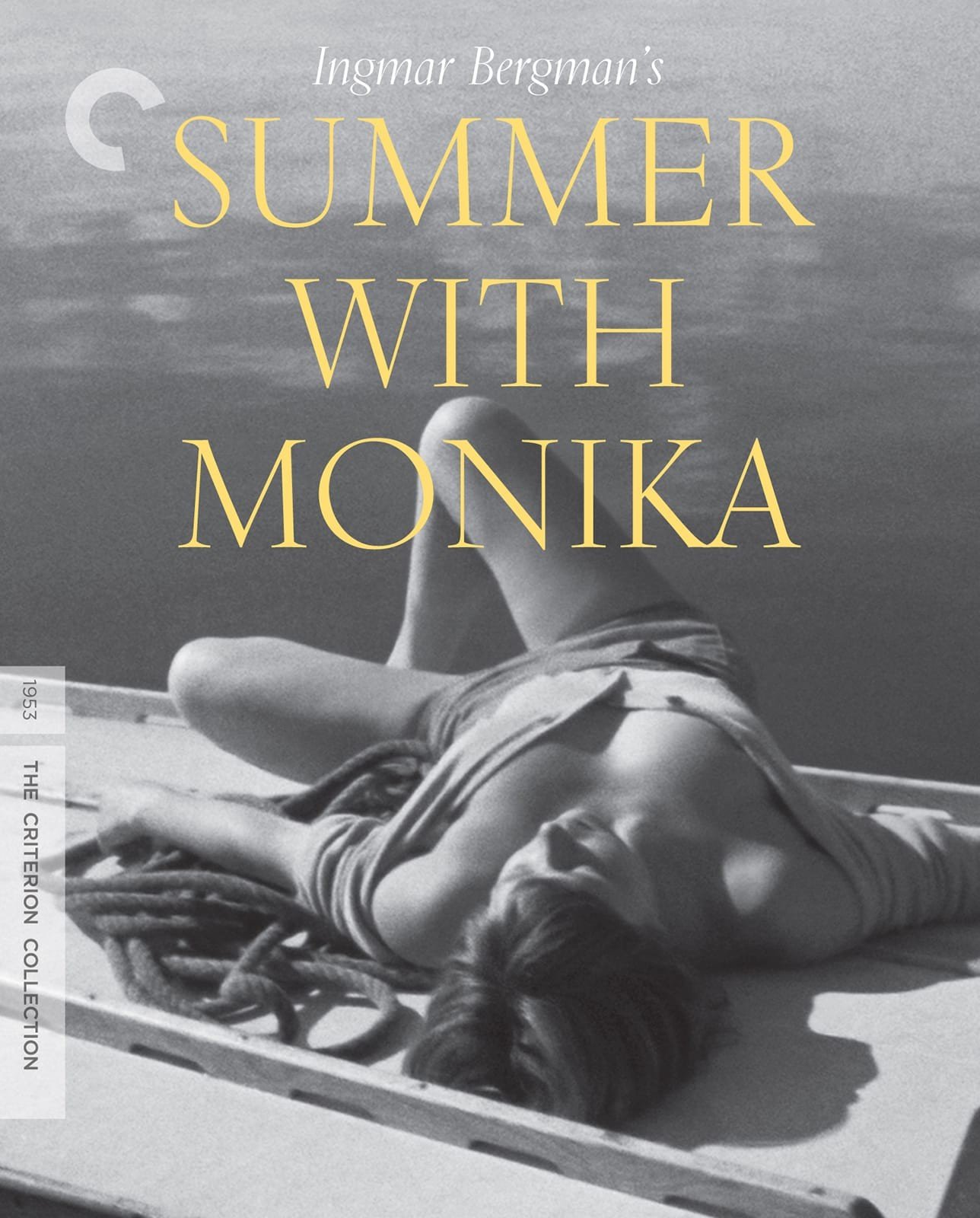 Despite the scandalously bare chests and buttocks on display throughout, the most unnerving shot in Ingmar Bergman’s Summer with Monika dotes on the title character’s face, in hard close-up, while lighting cues fade the set behind to a stagey black. At this point in the story, Monika’s seasonal vacation has long since ended: She’s given birth to a child she doesn’t particularly feel like raising, and she’s taken to cheating on her once-whimsical but now dully dutiful husband, Harry (Lars Ekborg), when he’s away on business trips. In a tavern, she sits beside an anonymous man who remains out of frame. She tilts forward to light a cigarette using the one in her new lover’s mouth. She puffs, then yanks the cigarette out in slow motion; sucking on phallic symbols is the price she begrudgingly pays for the smoke. Then she turns and looks directly at us, the spectators—and at the camera, the progenitor of the narrative, the director’s ocular prosthetic. Her expression is both fiery and taunting; pleased with itself, but not with its audience. She seems to hate us recklessly, as a girl might an adult who doesn’t know what to make of her.

The above scene is probably the film’s most discussed, aside from the one in which Monika—played by the lithe Harriet Andersson—sunbathes nude, and these form a neat little binary in the discourse, a nearly feminist one. After her undressing, she’s given the opportunity to turn us into observatory objects, and to judge us before we have a chance to criticize her infidelity. But it’s not as tidy as it seems. The movie doesn’t end with Monika’s slight revenge; in the last moments, it’s Harry we watch, clutching his infant, and staring into his own reflection (or out to us in our theater seats, as it appears) while the scene slowly fades into memories of the summer, the boat, the islands, Monika’s breasts, etc.

The two scenes are mirror images. Harry is as open and obvious while breaking the fourth wall as Monika is unreadable; we literally appear to be penetrating his gaze and feasting on the regret behind it. And neither one is entirely sympathetic. If Monika’s impenetrable alienness entices us from a distance, Harry’s lonesome transparency brings us nearer to his wistfulness than we’d care to get—even if his mind does linger on the contours of Monika’s body and their rippling, oceanic echoes.

This staring contest not only between the sexes, but between director and audience—as well as, more obliquely, film and theater—is perhaps the true exordium to Bergman’s cinematic argument, one he’d begun making almost a decade earlier and one that would crystallize only months after Summer with Monika with the far more assuredly cautionary Sawdust and Tinsel. Summer with Monika’s subject is nearly identical to that of Sawdust and Tinsel: It’s an experiment in male masochism that often feels misogynistic. The teenage characters here, however, fail before they’re even really given a chance to waste their adulthood; Summer with Monika compresses virtually a lifetime of error into a single summer and an epilogue that takes us a few years forward. The titular female’s flowering body and frigid stare make the movie one of the director’s most intense, but the plotting is some of his most sloppily cruel.

The start of the film follows boyfriend Harry and girlfriend Monika through their daily lives in a completely collapsed and nearly unbearable-to-watch working-class Stockholm. Their families and occupational superiors never stop complaining or lashing out, and eventually their voices turn into a supercilious monotone, like the faceless older characters in a Peanuts cartoon. Monika soon grows tired of her dipsomaniac father’s beatings, and persuades Harry to run away with her in his small motorboat. But after only 15 minutes or so of naturalistically lit water scenery and carefree face-nuzzling fun, she announces that she’s pregnant. As far as “How I Spent My Summer Vacation” bildungsromans go, Bergman’s sobers up rather quickly, and with odd hints of puritanism. The way the scenes are structured, it’s almost as if Harry knocks Monika up by gaping at her naked back.

After this revelation, the island-hopping loses its charm and becomes a kind of primal test, with Harry the protectorate of a loony expectant mother and both living off the land’s fat. But as Bergman unpetals his characters down to their savage essence, their stark and almost unbelievable differences begin to feel like aimless allegory. Monika is an estrogen-fueled survivor: When a man sets fire to the couple’s boat, she nearly beats him to death with an oar, and in another scene she steals a pot roast from an affluent vacation home, appearing totally feral among its finery. By contrast, when Harry quits his day job in a china shop at the movie’s beginning, he daintily tips over a single glass in protest; even when the stakes are nonexistent, he’d rather not gamble. It’s not implausible that a kid like Harry could be misled by a harpy like Monika, but his chronic feebleness stunts their dynamic, and the film’s dramatic pulse. By the end of the story he’s a cipher, literally a receptacle for memories of banging a girl on various beaches.

But what memories. Even as the story spirals out of control with surprisingly Huck Finn-ish social didacticism, the photography remains spookily pellucid, almost shadowless, as if suggesting that there’s little within Harry and Monika that isn’t being illuminated. This, too, is what makes those later fourth wall-breaking shots so curious. We know these characters and their motives; they’ve been exposed to us almost forensically. Yet their faces still challenge us, still dare us to be sure that we know them. I sense that this challenge is futile and hollow (it’s just more youthful arrogance), but it makes me want to invent entire lives for Harry, and Monika especially, to guard behind their expressions of mysterious effrontery.

One of the best-looking films of Bergman’s pre-Nykvist days, Summer with Monika offers two visions of worldly harshness: gritty urban shadow and blinding seaside sunlight. The middle ground is the bosom of the boat, where water arcs reflect off of the dim wood that provides Harry and Monika with shade. Criterion’s 1080p transfer is just short of terrific: The blacks are stark and almost shocking beside the tan skin and white ocean water, but the film grain varies weirdly from scene to scene, as if the master were compiled from sources at wildly different restoration stages. It’s only occasionally distracting, however, and likely the smoothest high-definition copy that could be managed. The buffed up monaural soundtrack provides remarkable clarity to some nearly whispered lines.

Bergman’s brief intro to the film isn’t terribly useful, and the 8mm, behind-the-scenes footage Criterion pared down into a featurette really only underscores how intimately the film was produced with such a small crew. Harriet Andersson’s interview by Peter Cowie, however, is both hilarious and quietly heartbreaking: She dissects the film, her body, and her short-lived affair with Bergman after only a gentle prodding. She talks about her surprise at being asked by the director to look into the camera (she says she wondered if he wasn’t crazy to commit the faux pas) while clearly implying how much of their relationship was embodied by that single shattered piece of film grammar. The other featurette, about the edited, exploitative version of Summer with Monika that toured America before Janus imported the real deal, is stuffed with dull details, and makes me wish that Criterion had just put the truncated version on the disc.

Come for the boobs, stay for the existential meditations on human suffering.

Review: Duet for Cannibals Is an Intriguing Mix of Pastiche and Parody