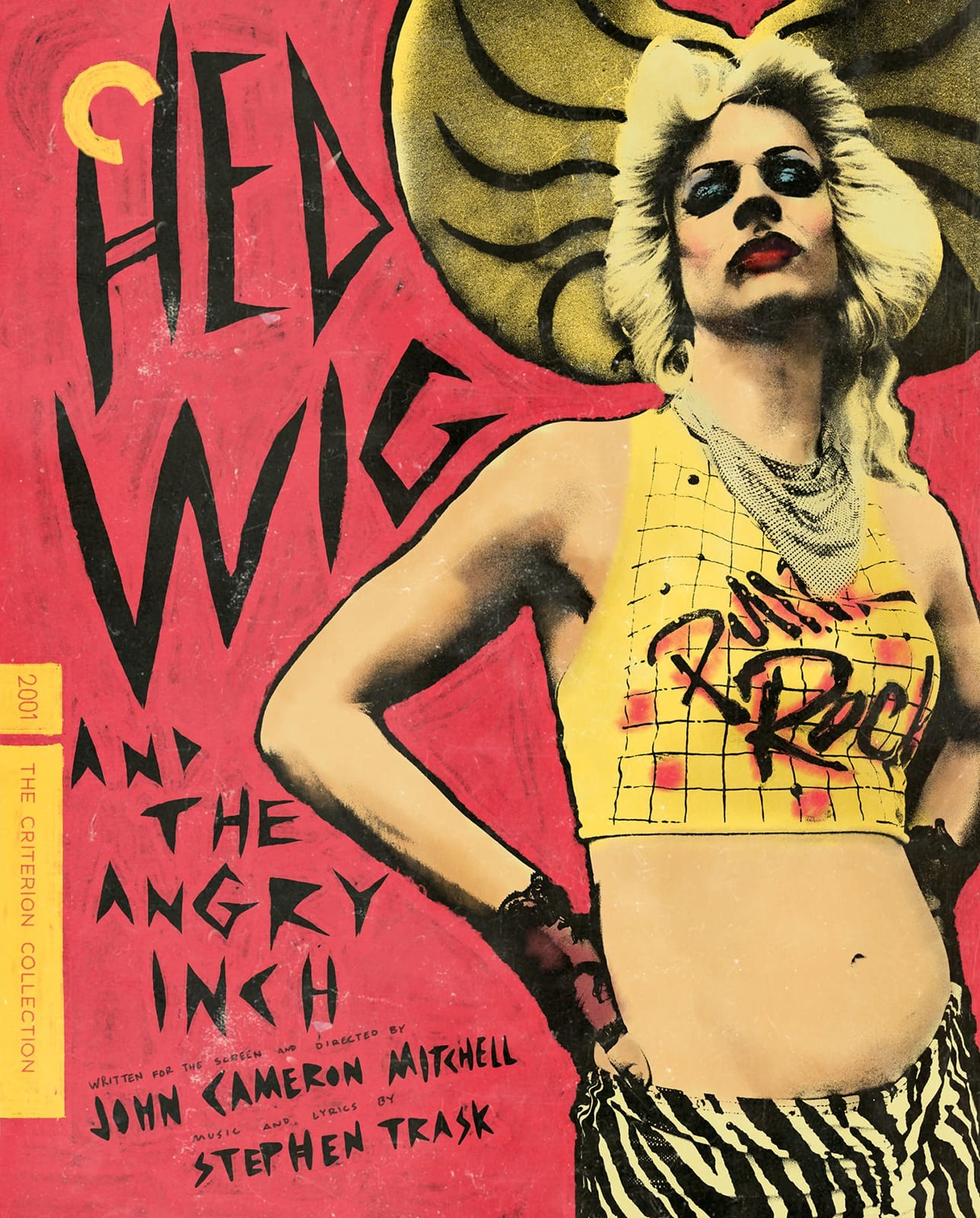 John Cameron Mitchell’s vibrant, tragic, and caustically funny glam-rock musical Hedwig and the Angry Inch expresses the same D.I.Y. punk spirit of its original stage form. Employing an array of homespun props, hand-drawn animation, and seedy locales, the film fashions itself into something both exquisitely alluring and delightfully garish out of extremely limited means, quite like its protagonist, a wannabe rock star named Hedwig (Mitchell), née Hansel Schmidt. Pulling from a seemingly endless supply of costumes and blond wigs of virtually every ostentatious hairstyle, Hedwig begins the film touring the United States and performing with her band, the Angry Inch, at a series of dingy seafood restaurants called Bilgewater’s. Inside these suburban chain restaurants, the raucous, punk energy that Hedwig brings to every song, no matter how confused or indifferent the crowd, is a jarring juxtaposition. And that’s just one of many dualities that abound in Hedwig’s tumultuous journey toward self-realization.

Born to a German mother (Alberta Watson) and an American G.I. father (Gene Pyrz) in the oppressed eastern side of a divided Germany, young Hansel is, from the word go, full of contradictions, very visibly struggling to fuse the disparate halves of a difficult life. This lack of and desire for unity fuels Hedwig’s anger, her artistic inspiration, and her endless quest for, as the song goes, the “origins of love” that sees her trying to fill the void in her life with the energy of performance, artifice, and the most intense of love affairs.

In fact, Hedwig’s Bilgewater tour is essentially a synthesis of all three modes. The tour sees her traveling to the same cities where her former protégé and lover, Tommy Gnosis (Michael Pitt)—who left her high and dry, taking credit for every song they wrote together in building his solo career—is performing to sold-out stadiums. Her spoken goal is to confront him about his act of betrayal, but one gets the sense that however wounded Hedwig is, she still looks to Tommy for fulfillment, even if it’s only vicariously through the crowds that cheer him on.

Tommy, though, isn’t the first man to betray Hedwig, and her life is abundant in cruel twists of fate, each of which plays out in the film as a half-remembered, highly stylized fever dream that’s given a propulsive life by the agonized Hedwig’s musical performances. The luridness of the suffering she recounts puts her comfortably in the company of the heroines created by one of cinema’s great enfant terribles, Rainer Werner Fassbinder. Elvira from In a Year with 13 Moons is certainly her closest cinematic kind, though the tragicomic dimensions of Hedwig’s anguish also align her with Margit Carstensen’s title character from Martha.

After being molested by his father, Hansel is drawn to the holy trinity of androgynous ’70s rockers—David Bowie, Lou Reed, and Iggy Pop—and eventually leaves behind the restrictive confines of Communist East Germany for the United States with an American soldier, Luther Robinson (Maurice Dean Wint). Their initial meet-cute is strange and hilarious in equal measure, infused with touches of biblical symbolism. Luther carefully places a red gummy bear in Hansel’s mouth and later creates a trail of candies leading to his naked body, which is covered only by, well, a lot more candy. But as with Adam and Eve, temptation comes at a price and after a botched gender reassignment surgery that his new beau pushed him into, Hansel is left with only a nondescript “mound of flesh”—the title’s “angry inch”—between her legs. And in leaving her old identity in Germany after she leaves, Hansel is reborn as Hedwig.

Hedwig’s outlandish tale unfolds primarily through musical numbers and flashbacks, pieced together in a nonlinear manner that further amplifies the dissonance of her itinerant life as she bounces from one gig to the next and one extreme to another, chaotically swaying between the opposite poles of transcendent love and existential despair. The film’s scattered bits of hyperreal melodrama and lurid comedy form, in patchwork fashion, a portrait of an identity split in two as Hedwig grapples with the notion of existing in between, or perhaps outside of, gender. As sung in “Origins of Love,” Hedwig is a child of the moon: “Like a fork shoved on a spoon/They were part sun, part moon/Part daughter, part son.” Hedwig’s martyrdom is only held at bay when she comes to terms with her own singular identity, stripping herself of the artifice that once necessarily shielded her from a cruel world and finally examines herself from within. Only then is her identity made whole, and wholly hers, and she can stumble naked into the streets unafraid of anyone seeing her as she really is.

Criterion’s transfer of a new 4K digital restoration presents an impressively crisp image without buffing out all of the slightly unpolished qualities of the cinematography that contribute so much to the film’s trashy charm. The color-grading is well-executed, balancing the tricky variety of visual styles used throughout Hedwig and the Angry Inch, from the vivid colors of Hedwig’s endless array of costumes to the more rough, naturalistic color scheme in the various Bilgewater’s restaurants where the Angry Inch performs and the monochromatic look of many of the flashbacks. The 5.1 audio provides perfectly clean dialogue and richly conveys the gritty, raw sound of the numerous musical performances.

This release has more than enough meaty extras to please even the most obsessive fan of the film. In an audio commentary recorded in 2001, John Cameron Mitchell and cinematographer Frank G. DeMarco cover everything from Mitchell’s initial concept and development of the project with songwriter Stephen Trask to the nitty-gritty details behind the film’s production on a very tight budget. Mitchell and DeMarco clearly have a great rapport, and their discussion of the more technical aspects is balanced by a selection of amusing backstage and on-set stories. The feature-length documentary Whether You Like It or Not: The Story of Hedwig offers a more in-depth look at Mitchell at work behind the scenes and in the process of developing the character of Hedwig through early live performances at the Squeezebox music club, the later off-Broadway production, and finally for the film. Much of the footage is quite raw, but that’s only fitting for a film that prides itself on its unique, homespun qualities.

The “From the Archives” series of featurettes offer even more personal reminiscences, with Mitchell, costume designer Arianne Phillips, and hairstylist/makeup artist Mike Potter each separately scouring through their personal archives of artwork, videos, magazine articles, and sundry other materials that spark fond memories and stories about their time working on the various productions. The film’s wildly varied musical styles and richly expressionistic lyrics are given their much-deserved due with “The Music of Hedwig,” a 30-minute conversation between music critic David Fricke and composer-lyricist Stephen Trask. The bountiful extras are rounded out with a reunion and discussion with various members of the cast and crew, deleted scenes that come with optional commentary, a breakdown of the film’s Adam and Eve scene, and an essay by film critic Stephanie Zacharek.

Review: John Swab’s Run with the Hunted Is Captive to Suspect Morality