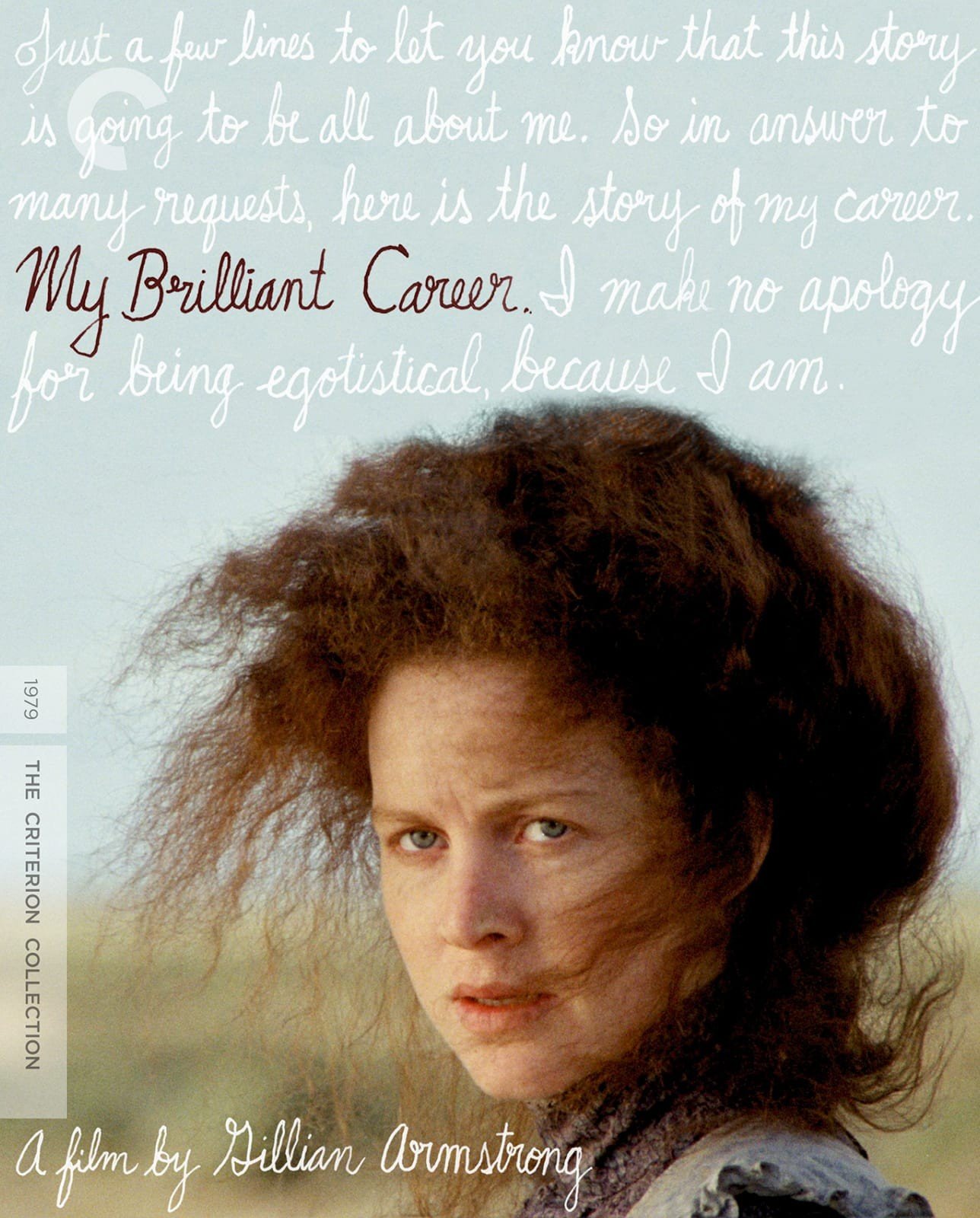 Gillian Armstrong’s My Brilliant Career is a love story, though it doesn’t end with a wedding or a kiss goodbye, but with the fiercely independent Sybylla Melvyn (Judy Davis) placing her freshly completed manuscript in the mail and leaning pensively on a fence as she watches a blazing sun set across the wild Australian outback. This is not a romance about two people’s feelings for each other, but about a young woman’s burning passion for herself. Despite powerful social pressure to get married, Sybylla is determined to respect and treasure her own individuality, to resist, as she puts it, “los[ing] myself in somebody else’s life when I haven’t lived my own yet.”

“I make no apology for being egotistical,” Sybylla announces in the film’s opening monologue, “because I am!” But if Sybylla may be an egotist, she’s not exactly vain. She’s wracked by self-doubt about her freckles and wild shock of wiry red curls, which instantly mark her out from the prim-and-proper women in her social milieu. Through Davis’s subtle, complex performance, which convincingly captures the awkward transition from mid-adolescence to young adulthood, Sybylla comes to life as an intricate mix of steely determination, childlike naïveté, adolescent lust, and profound yearning. She’s prone to flights of fancy (getting drenched as she dances in a sudden downpour) and displays a quick, sardonic wit, but overriding everything is a ferocious hunger for independence.

However, when it comes down to it, Sybylla doesn’t know what she wants to do with that hunger. She only knows that when dull try-hard Frank (Robert Grubb) proposes marriage, it’s not an option—and rather than say no, she simply ignores him. But when Sybylla’s parents (Alan Hopgood and Julia Blake) ship her off to live with her grandmother (Aileen Britton), she finds herself falling for well-to-do charmer Harry Beecham (Sam Neill). It’s hard to blame her. With his rugged good looks and respect for Sybylla’s unconventional personality, Harry seems like the perfect match. But of course, that’s the problem: He’s someone she could absolutely fall in love with, but if she were to allow herself to do so, it’d spell the end of her autonomy.

Adapted from Miles Franklin’s turn-of-the-century novel of the same name, My Brilliant Career nevertheless feels wholly contemporary. Expertly recreating the novel’s late-19th-century milieu, Armstrong’s film juxtaposes the finery of the Victorian upper crust with the dusty, hardscrabble landscapes of the outback. The landscapes, with their rolling hills of high yellow grass, draw inspiration from the paintings of Australian impressionist Arthur Streeton, while the detailed, lived-in interiors suggest the work of Édouard Vuillard. This painterly evocation of a classic literary source anticipates the sumptuous literary adaptations of Merchant-Ivory. But Armstrong’s vision is more direct: Hers is a self-consciously feminist film, one whose dramatic stakes always carry the weight of a social critique.

If the narrative is slightly schematic in the way it sets up a binary between Harry and freedom, it’s never didactic. That’s thanks to Armstrong’s clear-eyed direction, which never feels the need to underline its points, relying on selections from Schumann’s “Scenes from Childhood” to lend the film a mood of droll wistfulness. Eleanor Witcombe’s script crackles with Austenian wit that’s enlivened by the rich, layered performances throughout. Sybylla is sprightly and always simmering with darker emotions as she grapples with the intensity with which Harry smolders for her, and Davis and Neill share a heady charisma that creates a genuine dilemma for the audience: You may want Sybylla to fulfill her potential, but you may also want nothing more than to see her and Harry forever in each other’s arms.

Franklin’s novel was largely autobiographical, tracing her own quest to become a writer in the face of a culture that neither cared much for literature nor freely allowed women to carve their own life paths. Franklin used a masculine-sounding first name in order to help the book get published. By the late 1970s, things had changed for the better in Australia but perhaps not as much as most would have liked. My Beautiful Career would become the first film directed by an Australian woman in nearly 50 years. In many ways, its making mirrored Franklin’s struggle to release her book: another female-made work produced in a heavily male-dominated field that would go on to inspire aspiring women artists for decades. (According to an interview with Armstrong on this Criterion Blu-ray, Jane Campion credits the film with inspiring her to pursue filmmaking.) When Sybylla’s well-intentioned Aunt Gussie (Patricia Kennedy) cautions her not to “throw away reality for some impossible dream,” we can feel Armstrong herself speaking through Sybylla in her defiant response: “It’s not impossible! It’s not!”

Featuring a glowing new digital restoration of the original 35mm by the Australian National Sound and Film Archive (NSFA), the Criterion Blu-ray marks a considerable improvement over Blue Underground’s 2009 disc. In contrast to the chilly, anemic colors of that previous release, this new restoration gives vivid life to the warm tonality of cinematographer Donald McAlpine’s sunny landscapes and low-lit interiors. NSFA has cleaned off the dirt and dust of the original 35mm elements but preserved the grainy textures. The transfer’s lossless monaural soundtrack faithfully reproduces the fairly simple sound design of the film, allowing us to easily discern some of the subtler ambient elements, such as that most distinctive of Australian sounds: the cackling call of the kookaburra.

The Criterion Collection has provided a relatively light array of special features for this release. The commentary track by Gillian Armstrong is informative and engaging, heavy on production notes and behind-the-scenes anecdotes. Unfortunately, a new interview with Armstrong covers much of the same ground. Davis, who, despite her friendship with Armstrong, has been openly dismissive of the film and her performance in it, appears in the extras only in an archival interview recorded in 1980 for French television. Another new interview segment with production designer Luciana Arrighi offers interesting insights into the film’s recreation of a bygone era on a relatively slim budget. Armstrong’s harrowing black-and-white student short One Hundred a Day is also included, as is an appreciative essay by critic Carrie Rickey, focusing on the film’s feminist elements.

This glowing new restoration does justice to Gillian Armstrong’s classic, though the disc’s rote collection of extras leave something to be desired.