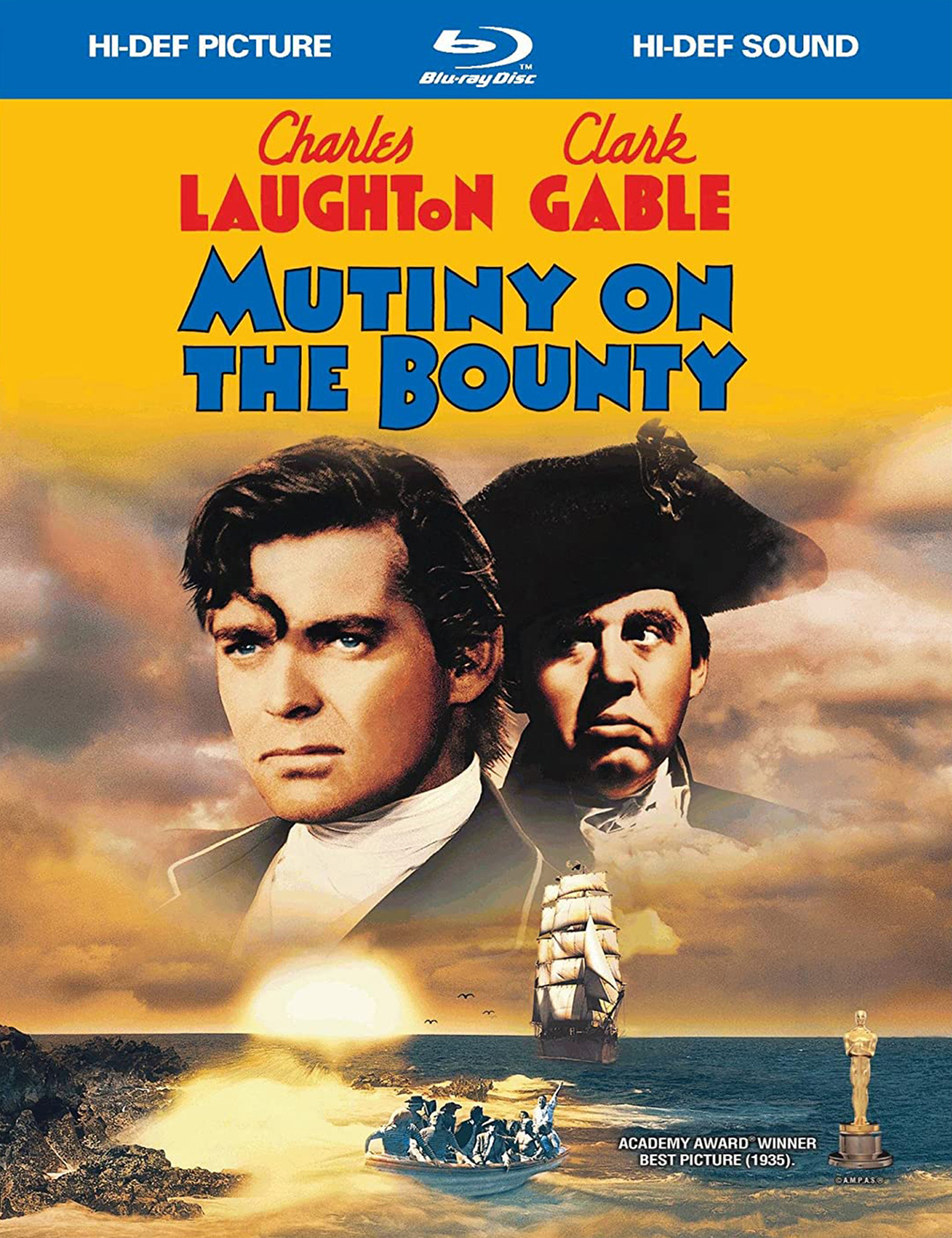 The story of the late-18th-century mutiny of Lieutenant William Bligh at the hands of Master’s Mate Fletcher Christian and a large part of the crew of the HMS Bounty had already become mythologized pulp by the time Frank Lloyd and Irving Thalberg decided to put the whole ordeal on the big screen. In fact, 1935’s Mutiny on the Bounty, written by Talbot Jennings, Carey Wilson, and Rio Bravo scribe Jules Furthman, took the eponymous 1932 novel, the first in a trilogy by Charles Nordhoff and James Norman Hall, as its source material rather than attempt to stay true to the already highly dubious accounts of what happened aboard the Bounty during its voyage from England to Tahiti, in the hopes of obtaining a shipment of breadfruit trees native to the island. Before Nordhoff and Hall had even put pen to paper, the mutiny had been the subject of a lengthy case study, a novel by Jules Verne, poems by Lord Byron and Mary Russel Mitford, and a “ballet of action” that opened on Drury Lane; the facts of the mutiny had long been swallowed whole by its legend and the larger-than-life personages of Bligh and Christian.

Lloyd’s adaptation, the third after two Australian productions including one starring Errol Flynn, was ultimately the most successful and famed of these varieties, winning the Academy Award for Best Picture and securing three Best Lead Actor nominations for Clark Gable, Charles Laughton, and Franchot Tone (all three lost to Victor McLaglen). The battle between the archaic rule of duty and a measured sense of humanism, typified by Bligh (Laughton) and Christian (Gable), offered the film’s chief dramatic pipeline, but the story is anchored by Midshipman Roger Byam, played very well by Franchot Tone in a role originally meant for Cary Grant. Byam, as the film begins, is a neophyte being coached and taken under wing by Christian; their relationship grows closer after Byam is ordered by Bligh to strap himself to the mast during a heavy storm. Indeed, Bligh’s position allows him to punish at the very hint of infraction, leading to such outlandish displays as the flogging of a dead man, the brutal practice of keelhauling and demanding the deathly ill to report on deck in full dress. He even seems to take a certain glee in announcing that he has cut water rations to ensure that the breadfruit trees do not die en route back to England.

By the time the ship leaves Tahiti, where Christian has met his future wife (Mamo Clark), Bligh and Christian have come to something of an impasse in their battle of wills. It isn’t until Christian witnesses the torturing of prisoners by one of Bligh’s cronies (over halfway through the film) that the officer casts Bligh and his followers off in a longboat and resets the Bounty’s course to return to Tahiti. For Bligh, Christian becomes a ghostly object of pursuit, not unlike the one that haunted Captain Ahab. By extension, Christian becomes a smaller character on screen, seen only celebrating the birth of his first child and then running his ship into Picairn Island to avoid being captured by Bligh, who returns on the HMS Pandora. In actuality, Bligh never rode on the Pandora, but the sequence allows Lloyd to build up the maddening obsession with discipline and duty in Bligh. Unable to give up the ghost, Bligh wrecks the Pandora but lives to see Byam and several other prisoners convicted of mutiny, before he was courts-martialed for losing the Pandora.

A high-seas entertainment par excellence, Mutiny on the Bounty is built less on adventure and romance than on the power of insinuation and the abuses endemic in archaic rules of hierarchy. Lloyd and the screenwriters are careful to rarely confirm whether any of Bligh or Christian’s accusations of one another (i.e. stealing coconuts, pocketing jewels, endangering cargo) are true. It allows for the specter of corruption to exist without there being any actual proof, which is to say that the line delineating what is real and what is fictional is as convoluted in the film as it was from the origins of the story. A great deal of the film exists to continue two competing dialects: one on the impossibility of accurate history, the other on the concepts of “right” and “wrong” with Byam acting as the audience’s proxy. These are, of course, as worn out a set of arguments as one is likely to see in the history of narrative cinema but Lloyd’s smart, lean direction amplifies the thematic undertones of the brilliantly structured screenplay so the arguments seems as fresh and urgent here as anything released this year. In its fascination with mythology and the often absurd codes of conduct in the armed services, Lloyd is not all that far from John Ford territory here; think Fort Apache in the middle of the ocean.

Lloyd didn’t have favored actors the way Ford did (no John Wayne or McLaglen, anyway), but he does some superb work with his performers here. Laughton lost 50 pounds, donned fake, thick eyebrows, and had his costume tailored by the same company who tailored the uniform of the real Bligh to help ensure a precise physicality that he holds throughout the film. Laughton’s Bligh is abusive, pig-headed, and humorless, but he’s not a grotesque creation, and Laughton’s ability to render such a seemingly cruel individual into what feels like a real human cannot go unheralded. Rather than offsetting Laughton, Gable’s immense star presence works well to build the battle of egos to a crescendo and his charm offers easy reasoning to why the rest of the crew were so quick to follow his lead. The political and social ramifications of Christian’s rebellion can’t be ignored but they are kept at an even tempo under Lloyd’s watch and, like anyone who takes entertainment seriously, the director and writers never allow the politics to be boiled down to a slogan or an easy one-liner. For Lloyd, Thalberg, and the writers, the point of the film was to tell a compelling story and, like the Bounty’s inebriated physician creating various tall tales to explain his wooden leg, facts and meanings ultimately just got in their way of crafting a great entertainment.

This 1080p/VC-1 encoded transfer of Mutiny on the Bounty showcases a great deal of attention to detail and love for the film. Nearly every trace of print damage has been erased, with the exception of a few minor scratches and some brightness adjustments in certain scenes. Other minor facets (graininess, chiefly) are simply a product of the age, but it doesn’t distract from the clarity of a transfer that brings out the costume and set designs in spectacular detail. There are no signs of compression and the black levels are peerless. And though it doesn’t offer the exhilaration of 5.1 audio, the DTS-restored mono soundtrack creates an immersive experience. Dialogue is crisp and prominent among the atmosphere noise and Herbert Stothart’s Oscar-nominated score is handled excellently.

The only extra really worth mentioning here is a small featurette (“Pitcairn Island Today”) that covers the modern conditions of Pitcairn Island, where Fletcher Christian and his fellow mutineers lived out the rest of their days after evading the HMS Pandora. The violent, depraved reality of what happened after Christian settled on Pitcairn is alluded to and adds another layer to the mythology of the story. Theatrical trailers, a digibook, and a useless newsreel about the movie winning the Oscar for Best Picture are also included.

An unequivocal success upon its 1935 release, Frank Lloyd’s big, astute spectacle can now be seen as a Swiss clock-type example of screenplay structure and a showcase for adventure unencumbered by beasts, blood, or much romance.