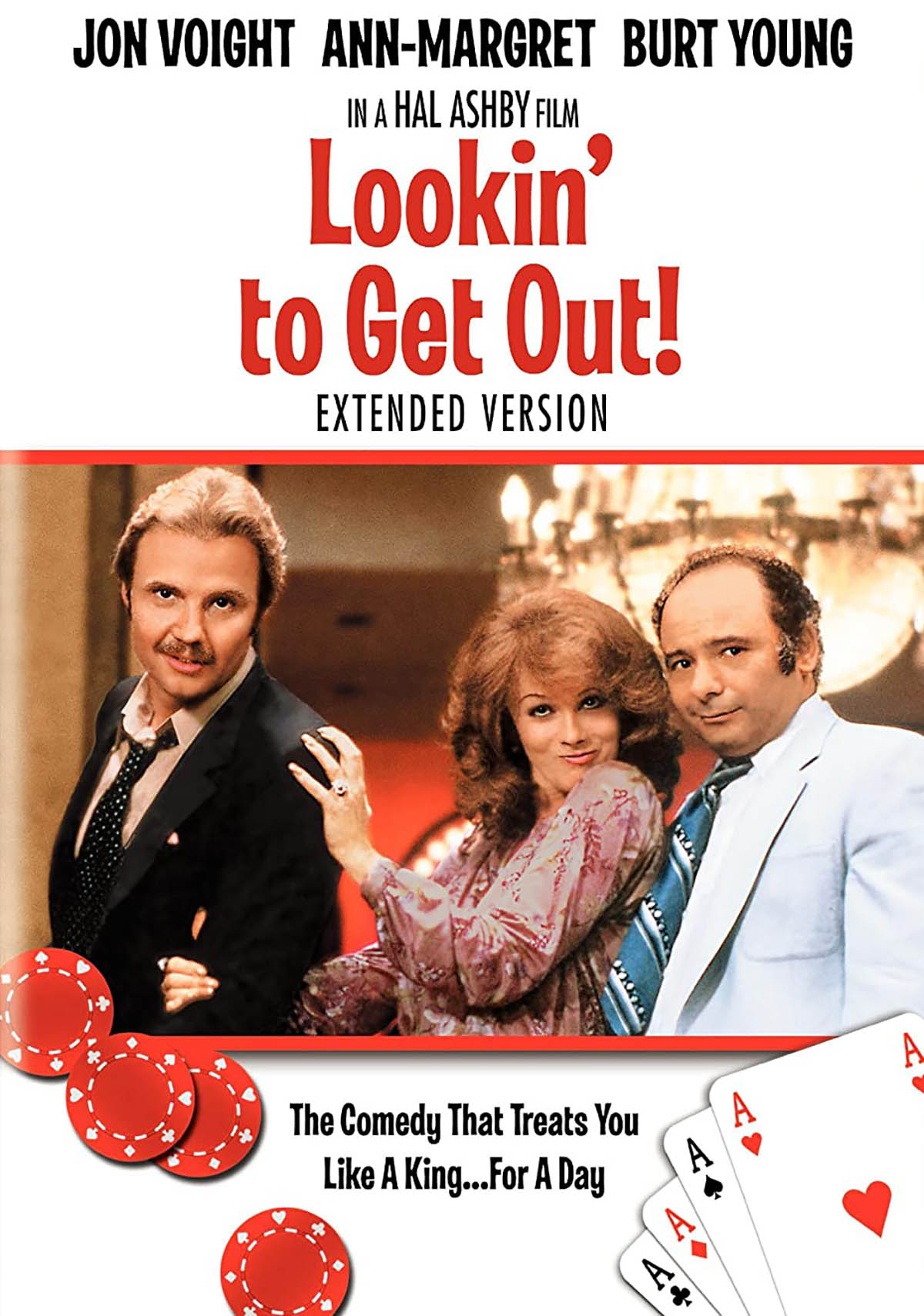 Whatever Hal Ashby’s merits as a director, and more crucially a methodical concatenator of film, the reason for his being virtually ignored by critics and biographers in the 30 years following his death is more or less clear: While the magnitude of his creative input is indisputable, his films more often than not feel like outcroppings of their lead actors’ personalities. Since Ashby was more concerned with the nuts and bolts of skewed storytelling than with auteur-persona peddling, he allowed films like Shampoo to spin wildly out of control under the whimsical helm of Warren Beatty and Robert Towne. Conversely, Peter Seller’s intelligently subdued performance in Being There somehow keeps the glib, one-note social joke at the film’s foundation from going stale, and frees Ashby to toy wryly with multimedia-fixated crosscuts.

All the evidence suggests that Ashby enjoyed similar freedom while shooting Lookin’ to Get Out, the first entry in his career killer trilogy, and it’s puzzling that the film lacks his signature playfulness. The director was happily offered the reigns by co-screenwriter and star Jon Voight, but in the finished product seems pitifully uninterested with—or perhaps neurotically unable to—exert the control required to make the picture “work” as either a narrative or a comedy. One is tempted to simply explain it away as a sign of Ashby’s flagging talents during his plummet toward Howard Hughesian eccentricity, since making difficult movies “work” was in retrospect his most obvious gift. Probably apocryphal but significant legend has it that he practically rewrote In the Heat of the Night in the editing booth, and that he was able to construct a potent elegy out of the confused post-Vietnam detritus that lay strewn about the set of Coming Home is indicative of peerless legerdemain. Lookin’ to Get Out, however, though pieced together with Ashby’s trademark character sympathy and technical aplomb, is one toke over the line: Unkempt and unconvincingly funny, the film is infused with the thin, despondent languor of a mourning man’s second-hand marijuana smoke.

Interestingly, that doesn’t appear to have been the case from the movie’s inception. Voight and a gambling pal, Al Schwartz, wrote the script as a half-serious lark, borrowing a handful of elements from similar poker-buddy flicks like Altman’s far more pithily existential California Split, and there are moments in the dialogue where the unique masculine intimacy of the writing process leaks through. Voight and co-star Burt Young (essentially reprising the role of the clueless, harried, and twistedly loyal Curly from Chinatown) aren’t as fluidly organic a pair as Elliot Gould and George Segal, but the ragtag juxtaposition of their physical characteristics and distinct methods of emoting is an eerily apt totem to the dichotomous tenor of the late ‘70s. Voight’s character Alex is 10 grand in the hole at the story’s start and flees to Vegas with his companion in tow to win the money back before some nefarious bookies carve the debt out of his flesh; his fugitive performance is all peak and no trough. Like a prescient tweaker warning of the snow-buried noses of the ‘80s, he flits, frets, and doubts himself, eventually pulling his hair out when an old flame (Ann-Margret) produces a five-year-old daughter he has no intention of acknowledging.

Young’s Jerry, on the other hand, is like a medicinally hippie holdover, perpetually befuddled and pathetically doomed to misread women through the diaphanous haze of his dulled reflexes. If remade for a high-concept audience, Jerry would likely be the “funny one,” with Alex occasionally veering toward the intimidating fringe, but as it is they share comic duties haphazardly and halfheartedly; the punch lines ooze by without any warning or timing. When Jerry meets a charming showgirl upon entering the MGM Grand Casino and asks Alex deadpan if she’s a hooker, it takes several seconds for the tickle to reach our ribs—as though our brains have gone sluggish from a contact high. Rather disarmingly, the unforced delivery of the jokes allows us to inhabit both of the character’s off-kilter mind-frames, though whether or not they possess perspectives worth experiencing is debatable.

Screening the extended director’s cut of Lookin’ to Get Out, even without the benefit of the original version (the theatrical edit has never been released on home video), one might find him- or herself nodding on occasion in tenuous empathy with the studio goons who “butchered” the film before exposing it to dismissive audiences. The movie is fascinating, and undeniably entertaining from an archival point of view, but even for an offbeat director like Ashby it’s a monotonously perplexing comedy. Tired devices, such as an advantageous case of mistaken identity that lands Alex and Jerry in a luxury suite or a third-act Mamet-esque card-shark con, fail to puncture the gelatinous membrane of foggy bemusement; countless scenes waft by with stretches of maniacal giggling from both Voight and Young, who only sober up to gamble or fend off their oppressors by venting dormant frustration (in the film’s weirdest near-joke, Jerry pummels one of the bookies on Alex’s trail in a men’s room stall and violates his anus with a wad of cash). By the time the pat ending arrives, with Anne-Margret introducing Alex to a frumpy toddler (Angelina Jolie, in her film debut), we can almost visualize Ashby in the shadows, chewing lazily on a doobie, shrugging off the entire ordeal. Which is very likely the only reasonable reaction to Lookin’ to Get Out.

Despite the confused content of the film, one has to concede that it looks phenomenal. Haskell Wexler, fresh from his experience pinch-hitting for Néstor Almendros on Terence Malick’s autumnal Days of Heaven, pulls off some daring photography tricks that emphasize Vegas’s protean meretriciousness: For example, car scenes use rear projection sparingly, relying predominately on transient window reflections of searing blues and reds to suggest movement. One sequence frames a corridor, weakly lit with fluorescent bulbs, against a vibrantly pink on-stage performance occurring just beyond the hallway’s left wall; we’re shown the glittering showmanship and the dour backstage all at once. The DVD contains a disclaimer about the poor quality of the film print, but the colors attack the screen with only a few damaged specks and hints of film grain. The sound is also excellent for mono, though unfortunately this means that the film’s idiotic theme song-it might have turned up in the ‘90s as the backing track to a cheap exercise tape-is clear as a bell.

A brief featurette is the disc’s main supplement, collecting a handful of new interviews with the three primary cast members and screenwriter Al Schwartz. There isn’t much in the way of revelatory material, but all parties involved fondly remember working with a hospitable Hal Ashby, perhaps in an effort to correct the director’s reputation for oddity and narcotics indulgence during that period. A brief letter from Jon Voight, reprinted as a single sheet insert with an admirably modest carbon footprint, explains how the extended cut of the film was unearthed.

Hal Ashby and Jon Voight sadly exhume the rigid, malodorous corpse of the ‘60s to kiss it on the lips and stuff some 50-dollar bills in its sphincter. Who wouldn’t pay 20 bucks to see that?