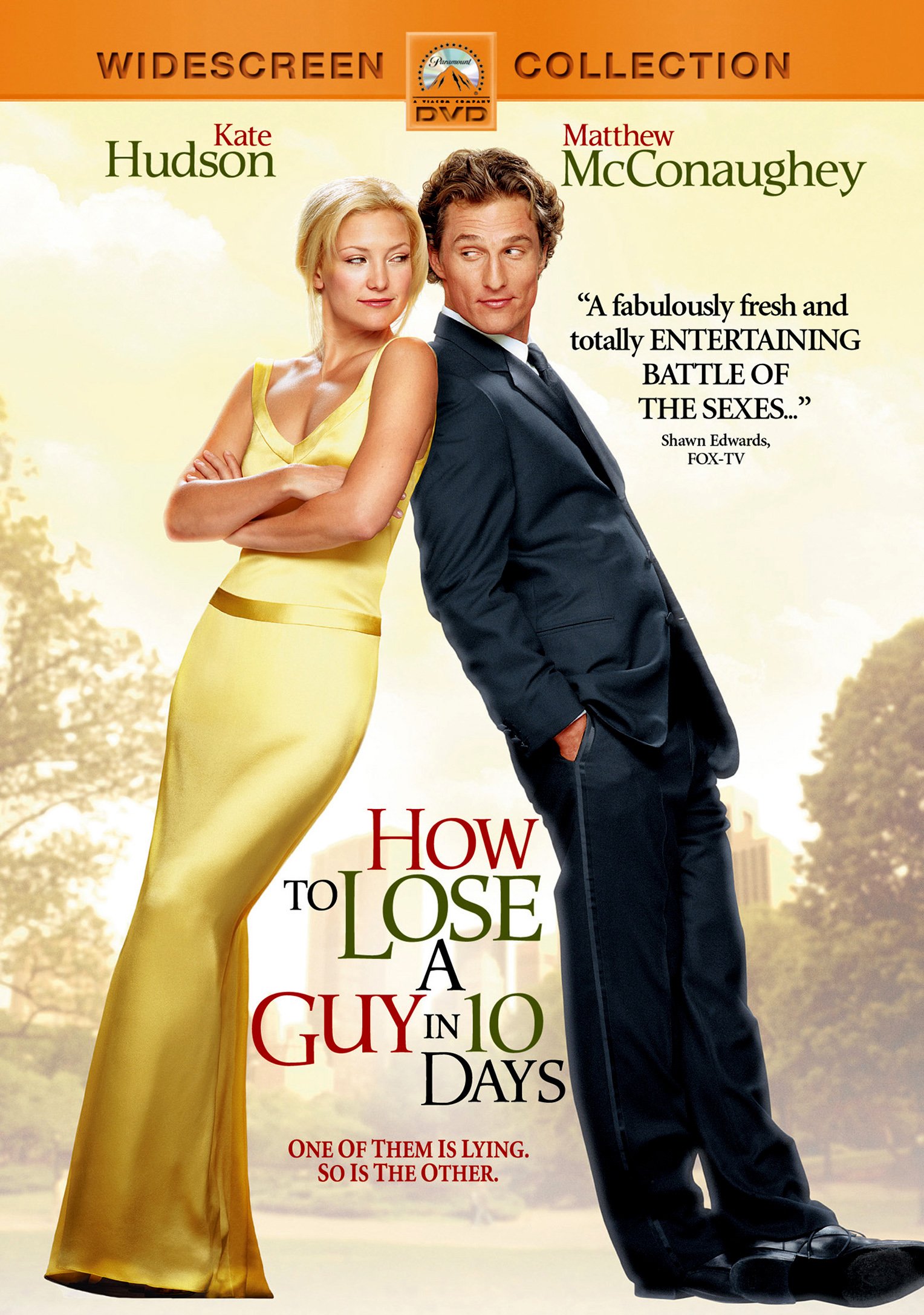 He’s an advertising exec who likes to take his clothes off in the office. She’s a journalist trying to keep her bearings living in a material world. When Andie Anderson (Kate Hudson) gets assigned a new how-to column by her boss at Composure (because women are apparently trying to keep “it”), she has to try and lose a man in 10 days using all the sad mistakes women have been making for the last 2000 years. Little does she know that Benjamin Barry (Matthew McConaughey) has a plan of his own: he needs to get her to fall in love with him in as many days in order to land a major diamond account. How to Lose a Guy in 10 Days begs one very obvious question from the start: why would a woman even need to research this kind of story when she already knows what it takes to lose a guy? Andie is a curious riddle, a Cosmo Girl who works for a sexist rag but longs to tackle serious issues like politics and religion. (The great Bebe Neuwrith is wasted in a role that could have really stuck it to the Anna Wintours of the world.) Andie calls herself a serious journalist but she can’t even fake a how-to column that writes itself. Note to aspiring journalists: if you’re working for The New Yorker, the legality of Laura Elena Harring’s breasts is not an appropriate pitch for your “Annals of Law” column. The filmmakers approach the magazine world as if the women who work for rags like Vogue and Harper’s are all ditzes. When working for Cosmopolitan, a friend and ex-colleague told me that the only way she kept her sanity was to write her stories as if they were Onion pieces: “How to Go Down on a Guy Without Smearing Your Make Up” or “How to Lose Weight for Your Lover but Make Him Think You’re Doing it for Yourself.” No one batted an eye because the line between reality and satire in the magazine world had apparently become a difficult one to distinguish. Forget the faux-feminist thinking these magazines deliberately hawk to their readers, sadder yet is the fact that women so easily buy into it. How to Lose a Guy in 10 Days is a relative failure but takes off slightly when it leaves the world of publishing behind and follows Hudson as she charmingly tries to ditch McConaughey. Sadly, though, the filmmakers are only concerned in hawking the same romantic misunderstandings seen on screen a million times before. There’s only so many times a person can see the same film (or read the same tired column) over and over yet filmmakers continue to wag the same rotten carrot before consumers because they’ve realized that audiences would rather have studios (not unlike magazines) doing their thinking for them. The only difference between How to Lose a Guy in 10 Days and Maid in Manhattan, are the font sizes and color schemes. Embrace self-help, reject this movie.

Paramount Home Entertainment presents How to Lose a Guy in 10 Days in its original 1.85:1 anamorphic widescreen on this DVD edition of the film. This is easily the company’s best transfer in quite some time. The image isn’t always sharp and blacks aren’t as inky as they could be, but skin tones are accurate and there’s not an edge halo in discernible sight. The Dolby Digital 5.1 track isn’t exactly complex, but dialogue is crystal clear and the combination of the film’s busy sound effects with its score evokes a bubbly ambiance that is never intrusive.

Director Donald Petrie’s mostly insufferable commentary track should prove to be a chore even for those who are remotely interested in behind-the-scenes anecdotes from the film. Petrie is more creepy than funny and repeatedly calls attention to his sexual libido. You may have a hard time getting past the “how to” opening title sequence, where Petrie reveals it was integral to get “the ultimate orgasm” icon to fly on screen at precisely the same moment as his directorial credit. As for the scene where McConaughey takes his shirt off, Petrie jokingly mentions how it was inspired by his own on-set striptease before acknowledging that it’s really an homage to Working Girl. More offensive is the men-are-from-Mars-women-are-from-Venus lens that Petrie observes the world through, not to mention the simplistic way he calls attention to the most obvious of character motivations. Then again, it would be difficult for anyone to make How to Lose a Guy in 10 Days appear smarter than it really is. “Mapping Out the Perfect Movie” is an impressive collection of cast and crew interviews. Because the featurette has been conveniently divided into 17 parts, you don’t have to suffer through an analysis of McConaughey’s Ben if you’re more interested in hearing from the film’s production designers or Neuwrith about her fabulous ice queen. Equally impressive is the “Mapping Out the Perfect Location” featurette. When you to click on any one of several locations on a Manhattan map, interviews with the film’s location scouts and production people are launched. Also included here are five deleted scenes, Keith Urban’s music video for “Somebody Like You” and previews for Lara Croft Tomb Raider: The Cradle of Life, The Core and the upcoming Indiana Jones DVD collection.

By Cosmo girls, for Cosmo girls. For anyone not living in a material world, chuck this one in the nearest trash receptacle.