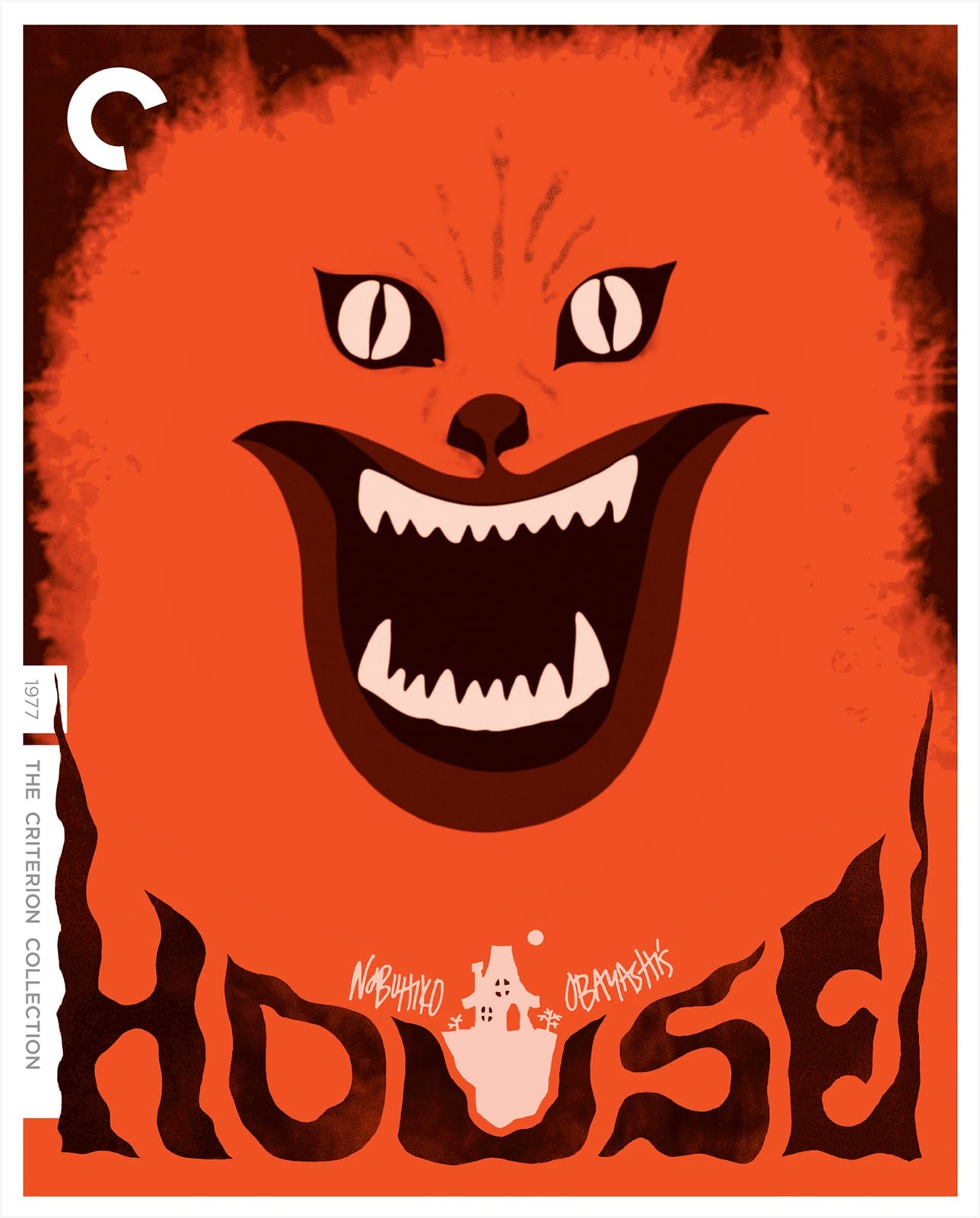 Upon its initial American release three decades after its possessed nascence, House, Ôbayashi Nobuhiko’s long-lost debut feature, was embraced with open arms by a bewildered but more than amenable audience. Initially championed by the fine upstanding folks at Subway Cinema, the canny cabal that annually bring Gothamites the New York Asian Film Festival, Ôbayashi’s trippy explosion of gender commodification and melodramatic psychedelia first screened in Manhattan last summer at the IFC Center, then again at the Brooklyn Academy of Music, and then earlier this year at the IFC Center for a month-long, seriously held-over run—and, oh yeah, a sporadic national series of roadshow screenings. These recent screenings paved the way for Janus Films’s new release of the film under the Criterion Collection banner.

We have much to thank the Subway Cinema folks for in their key role in bringing House out of Janus’s vault and onto DVD. They deserve all the credit they can get for reviving interest in Ôbayashi’s cracked haunted house flick. But the trouble with the road the Subway crew paved for House is that it’s left American critics completely disarmed in the face of Ôbayashi’s dazzling, acid-drenched assault. To be sure, House is wacky as all get-out, but it’s also a wonderfully complex putdown of the plastic world of material cuteness that little girls dream of when they imagine growing up in a world ruled by nostalgic advertising and romantic melodramas. With its severed gams, demonic fluffy white cats, and killer piano forte, House is a dollhouse nightmare that could only come from the mind of an inspired and seriously disgruntled ad man like Ôbayashi, whose career pre-House was made with ads like this blisteringly weird this commercial for Mandom cologne starring Charles Bronson.

Most American critics contracted an Andromeda strain of the Stendhal Syndrome and flew into flights of ecstatic frenzy over House. Even The New York Times’s Manohla Dargis, she who soared into an epileptic fit after seeing Seijun Suzuki’s Princess Racoon at Cannes in 2005, remarked with mouth agape about House that perhaps we should give credence to the fact that Ôbayashi pieced together some of the plot of the film from his own daughter’s dreams. As Dargis pointed out, at the point of her writing that review, nothing had been written about Ôbayashi’s oeuvre that was readily accessible to an English-speaking public (Chuck Stephens has since provided an informative history of Ôbayashi’s career around the time of his making House; still, it’s telling that that essay is the only article featured in the booklet Criterion included in their new release).

So how exactly does one dispel House’s air of impenetrability and make sense of it? For starters, one has to acknowledge that Ôbayashi’s film, which seems to have inexplicably descended on American critics like 2001: A Space Odyssey’s monoliths, makes sense and even has a plot, of sorts. Oshare (Ikegami Kimiko) has just been introduced to her new mother-in-law (Tomokazu Miura) and is now clearly sublimating something fierce. In struggling to reconcile her image of her dead biological mother with this new surrogate, she takes a trip to the countryside to visit her spinster aunt (Yoko Minimada), who was left widowed and untouched after her fiancé died in WWII. Once there, Oshare and her ultra-precious all-female troupe of friends accompany her in her journey back to her mother’s roots. Ultimately, everyone is picked off one-by-one by Oshare’s deranged aunt just because they insist on sticking together and generally maintaining a picture book ideal of sisterly solidarity.

As Dargis points out, there’s an unnatural haze that pervades the film’s every frame, a Polaroid-white sheen that covers everything with an air of misplaced wistfulness. All tension in Oshare’s regressive fantasy world floats atop the surface of the advertisement imagery that Ôbayashi loads House with. This is a world where painterly billboards with cheerful baby-blue skies look naturalistic by comparison to the rippled sorbet sunsets that preside over Oshare’s aunt’s distant, vine-covered villa on a hill. The place is best described as an eerily picturesque landscape—at least, picturesque by the standards of Romper Room and other children’s shows defined by DayGlo pastels and AstroTurf surfaces—that melts at a whim or is transformed by diabolical stop-motion sequences full of double exposures and reverse-motion photography. It’s a place where quaint household objects have become jubilantly homicidal portals to hell: Lampshades, plastic skeletons, killer phone cords, airborne severed body parts, and that darn cat all dance about with an unholy zeal in an attempt to literally just eat their cute ‘lil victims up.

And what cute victims they are. These girls have invested so much of their personalities into the underpinning cute-centric logic of the products Ôbayashi reluctantly slung that they no longer even have human names. There’s Mac, the girl who thinks with her sto”mac”h, Kung Fu, the high-kicking teen, Fanta, the daydreamer, and several other ersatz goils. If you were to swap their outfits and matching accessories, you almost certainly wouldn’t be able to distinguish one from the other. When they die screaming, it’s a daft act of psychic venting enacted on a new generation of lonely women that have invested too much meaning in things (“I began to talk with them [household objects] after awhile”) from an older, now-embittered one. Oshare’s gal pals are “young” and “unmarried” and they believe sincerely in the safety of objects. Therefore: Young pretty things must die!

The funniest thing about House is how sincere Ôbayashi’s half-cocked body-horror gender politics gets. Once Oshare inherits her aunt’s spite after applying an especially menacing tube of lipstick, the film’s eponymous domicile begins to snap up victims left and right in a frenzy of sexually charged limbs. One of the girls is buffeted to death in a one-woman pillow fight while another has her digits, her legs, bits of her torso, and her arms lopped off by a famished baby grand piano. At this point, Ôbayashi only shows off the girls’ bodies when they’re getting chewed up by flying upholstery and evil witches. While their bodies are not all-together undeveloped, they’re not exactly the stuff of centerfolds either—and Ôbayashi knows this all too well. Before the film’s fittingly florid coda, he treats us to a parade of budding flesh and begs us to consider it a wormy taste of what prepackaged fairy-tale perfection really looks like. LSD really must be a hell of a drug.

The folks at the Criterion Collection have once again outdone themselves. Their new DVD release features a spotless video transfer; the myriad colors of the film look especially sharp now that Janus had a print of the film color-corrected. It’s a notable improvement over the Masters of Cinema release of the film, whose video quality is significantly inferior (there’s significant edge enhancement in the Masters of Cinema release and its video transfer is also comparatively much blurrier and drenched in a funky ruddy tint). The soundtrack on the Criterion release is similarly crystal clear; it perfectly balances the various soundtracks, including the sound effects, sugary synth music, and saccharine dialogue.

Criterion’s House DVD features some terrific special features that make this release a valiant alternative solution to people that don’t already own the earlier Masters of Cinema DVD. The highlight of Criterion’s release is Emotion, a 40-minute short film Ôbayashi made in 1966 that plays out like a self-parody and Richard Lester homage, featuring voiceover narration by Japanese cultural historian Donald Richie and a vampire (called “a Dracula”) playing the piano in the forest while umbrellas twirl and possibly pay homage to The Umbrellas of Cherbourg. But all of the other ancillary special features are equally worthy. A lengthy interview with Ôbayashi provides an enlightening personal history of contemporary cinema and pop preoccupations in Japan when Ôbayashi directed House. Even a three-minute appreciation of the film by director Ti West (The House of the Devil) is thoughtful enough to make one want to overlook the fact that we need to resort to an appreciation as superficial as West’s to enlighten the film for first-time viewers (he talks about the craft and the considered wackiness of the film eloquently but never once attempts to grapple with its thematic content).

Even if you have seen House before and are too scared to mess around with its bananabananabanana-ey goodness, Criterion’s new release is still a must-own and a welcome step in the film’s canonization as a brainy and blisteringly strange cult classic.

Review: Labyrinth of Cinema Is a Time-Swirling Trip Through Japanese History