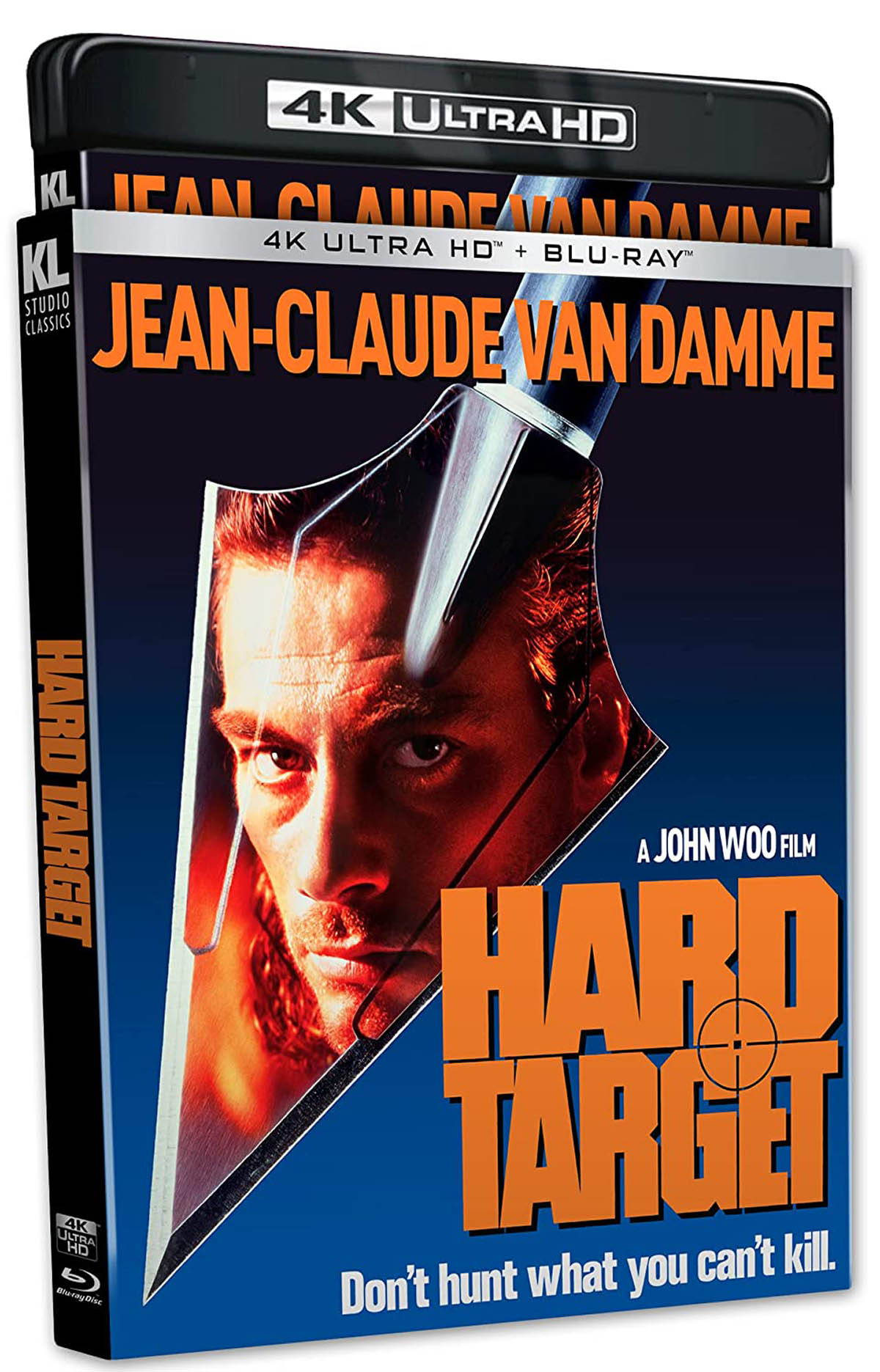 By the time that John Woo came to America to make his first Hollywood movie, he was widely acknowledged as the finest action director of his time, having come off a string of Hong Kong classics ranging from A Better Tomorrow to Hard Boiled. Compared to the “heroic bloodshed” of those films, in which their heroes find a kind of nobility in committing carnage without that violence being glorified, his 1993 American debut, Hard Target, rarely reflects on the ruin left in its protagonist’s wake.

That, though, doesn’t preclude a certain political bite. Chuck Pfarrer’s script, about elites hunting men on the streets of New Orleans for sport, has a component of class commentary, which is heightened by the fact that the prey are homeless military veterans. In one of the film’s most memorable scenes, a wounded target manages to slip free from his pursuers and get back to crowded streets, where he’s promptly ignored, if not outright scorned, by those he begs for help.

Still, Hard Target is likely best remembered for its ecstatic goofiness, marrying Woo’s wild formalist techniques with a host of late-’80s and early-’90s American action tropes. Not to mention the strange star power of Jean-Claude Van Damme, who plays Chance Boudreaux, a Cajun former Marine who finds himself pit against Emil Fouchon (Lance Henriksen), the organizer of the manhunts. The role of Chance gave the Belgian actor the rare opportunity to justify his French vocal inflections, yet hilariously this is maybe the most baffling, dissonant character that Van Damme has ever played on screen: Sporting a stringy, oily mullet and an unwashed, all-denim outfit, Chance looks like the dark twin of Patrick Swayze’s bouncer from Road House, and at all times he’s the weirdest thing in the frame.

That’s saying something, because the film never lacks for silliness bordering on absurdity. At one point, Van Damme punches a snake to knock it unconscious, and later he winks conspiratorially at a pigeon that “helped” him take down a goon. Wilford Brimley, playing Chance’s bayou-dwelling Uncle Douvee, rides a horse as he brandishes a bow in one hand like a medieval warrior as his home explodes behind him—all of it captured, of course, in slow motion. And in sequence capped with a marvelously slapstick gag, Chance takes down Emil in a warehouse filled with junked Mardi Gras floats. Woo, one of the more dramatically minded Hong Kong genre directors, unexpectedly shows a real flair for the kind of action comedy that peers like Sammo Hung and Jackie Chan made their stock in trade.

Throughout the film, Woo pulls out all the stops to transpose his style to the larger budget of an American production. All of the director’s stylistic tics—slow mo, doves, Beretta handguns—are not only on full display in Hard Target, they’re also magnified to new and epic proportions. And yet, Woo manages to retain the grounded physicality of his finest Hong Kong work, mainly thanks to Van Damme’s lithe martial arts training. The actor is a perfect match for Woo’s balletic sense of choreography, moving fluidly whether kicking a gas can toward a henchman’s face before blowing it up with a shotgun or executing a perfect karate strike. Woo would spend another decade or so in Hollywood making increasingly large, impersonal blockbusters, but Van Damme gave him a crucial fulcrum on which to balance his homegrown talents with the radically different methods and aims of American action.

Kino Lorber’s Dolby Vision-boosted transfer provides easily the best home video presentation to date of Hard Target. Presenting the 100-minute international cut—and not, as many hoped, John Woo’s proper 116-minute director’s cut, material for which exists in too poor a condition for official release—this transfer does reveal a bit of wear and dirt here and there. Nonetheless, it’s a strong presentation overall, with excellent grain distribution and added warmth in the film’s yellow color timing. There’s consistently clear contrast between foreground and background objects, as well as subtle gradations of color tone.

The disc comes with both a 5.1 surround remix and a 2.0 stereo track, but Kino has posted that an error has been found in the former track, as the channels have been accidentally reversed on some sound effects so that something that happens on the right side of the screen is heard on the left side, and vice versa. Corrected copies are being produced and anyone who receives an early pressing can go here to request a replacement copy. On the general merits of volume balance and distribution, the 5.1 track sounds boisterous and clean, but the glaring issue of mismatched direction makes a full judgment impossible. The 2.0 track lacks the directional issue, though it does sound much thinner than the surround mix.

The UHD disc comes with an informative commentary by action film historians Brandon Bently and Mike Leeder that contextualize the film within Woo and Jean-Claude Van Damme’s careers, while the accompanying Blu-ray contains short interviews with the cast and crew, including Woo, actors Lance Henriksen and Yancy Butler, and stunt coordinator Billy Burton.

John Woo’s U.S. debut is a goofy action classic, and Kino’s sharp UHD is poised to be definitive once they correct an acknowledged audio error.

Whitney Houston: I Wanna Dance with Somebody Review: Step by Step from the Biopic Playbook

4K UHD Review: Powell and Pressburger’s The Red Shoes on the Criterion Collection