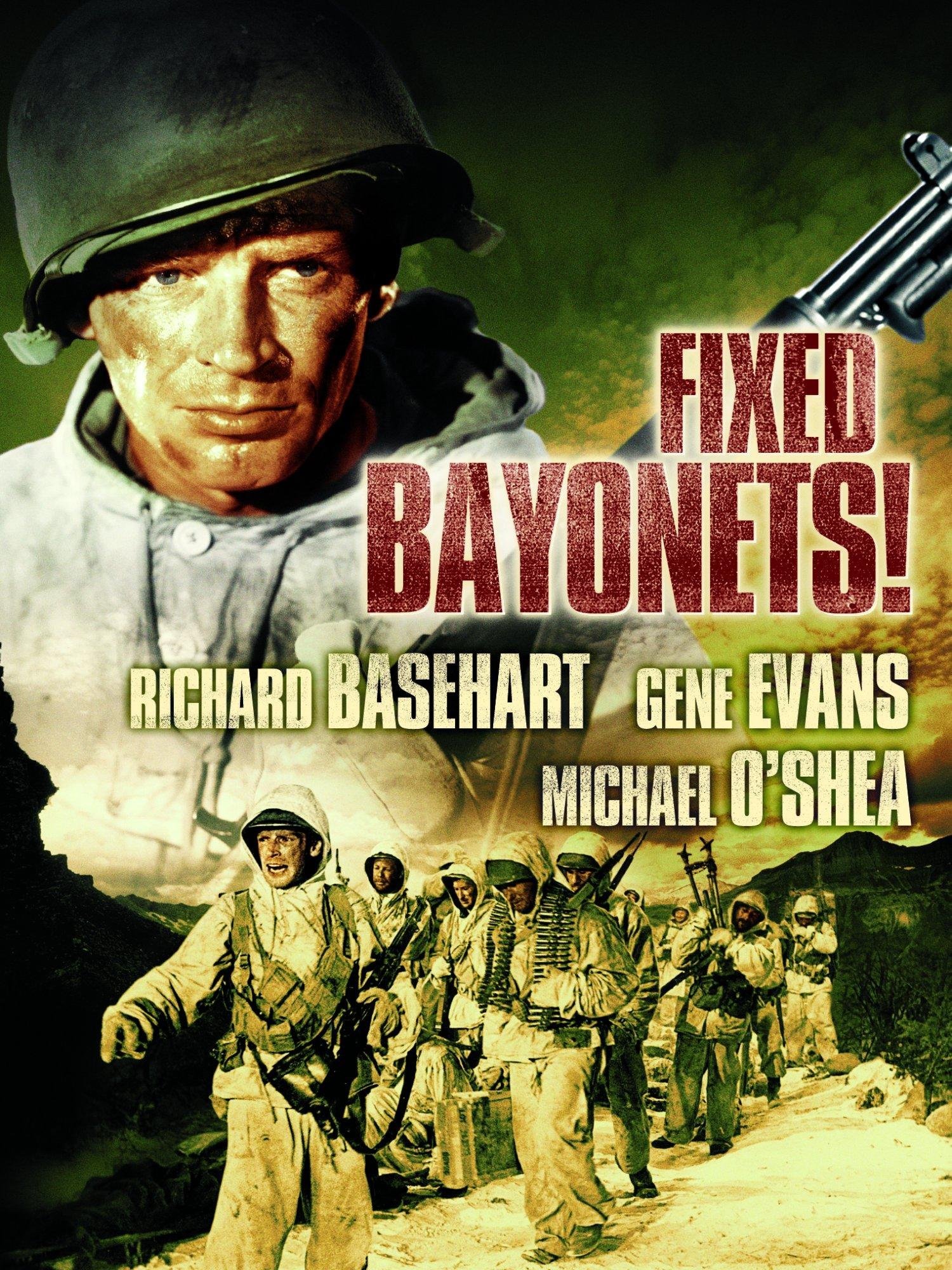 Excepting those by Terrence Malick, modern war movies appear to be engaged in battle with all earlier war movies, attempting to one-up each others’ verisimilitude in both the fury of combat and the camaraderie between men during times of distress. We’ve come a long way from the days of Patton, which had no room for camaraderie (Scott’s Gen. Patton was more than enough character for the whole film) or combat (which was only there to justify the endless scenes of strategy planning). If the Korean War B movie Fixed Bayonets! has endured, along with Samuel Fuller’s various other war epics culminating with The Big Red One, it’s because of a few aspects particular to Fuller’s career, which began not in film but in yellow journalism and pulp writing. The films of Fuller, who was himself a soldier during WWII, share with current war movies a seeming desire to emphasize war realistically, which is to capture both the random moments violence as well as the anxious tedium surrounding them. If the penny-dreadful obviousness of Fixed Bayonets!’ painted backdrops and cardboard mountains are plainly evident throughout, it’s worth considering that Fuller was probably never half as interested in conveying realism on cinematic terms as he was solidifying the alternate “realism” of his bulldog persona. (His magnum opus may not even be a movie at all but instead his mammoth, 600-page autobiography A Third Face.) The technical shortcomings of many Fuller films lend credibility to his “roll up your sleeves and start slinging the shit around” approach to moviemaking. That he apparently slung them out so quickly and efficiently (the very same year saw Fuller releasing the even more respected war effort The Steel Helmet) gives them the impression of being much closer to the truth, with far fewer filters in between. When comparing even the clumsiest sequences of Fixed Bayonets! to something like Saving Private Ryan (whose opening scene probably comes as close as any film ever has to fulfilling Fuller’s much-repeated quip that for audience members to really understand what it meant to be in the middle of combat, you’d have to plant a sniper in the theater and pick off a few at random intervals), it’s hard not to trust Fuller’s plain English mise-en-scène as the real deal, basic reportage. Any number of war films have shown what it’s like to watch the soldier standing to your side get vivisected by shrapnel. Only a few have offered complementary moments of dull revulsion as raw and masculine as Fixed Bayonets!’ platoon stomping their bare feet on the cold, rocky floor of a cave in a vain attempt to break up the frostbite.

Fox may not have given Fuller much money to work with when he filmed Fixed Bayonets!, but they’ve certainly spent whatever money was necessary to keep the print in good condition over its years spent in the vault. The picture is almost Criterion-level pristine, with a stunning array of monochromatic hues. Even the artifacts look like they have a purpose. There is no discernible difference between the mono and stereo mixes presented, but both are legible.

Aside from the theatrical trailer and a still gallery, not much. It probably would’ve screwed up their price point, though, to get Martin Scorsese in for a commentary track.

Fixed Bayonets! isn’t the most hyperbolic film in Samuel Fuller’s catalog, but it earns the exclamation point.