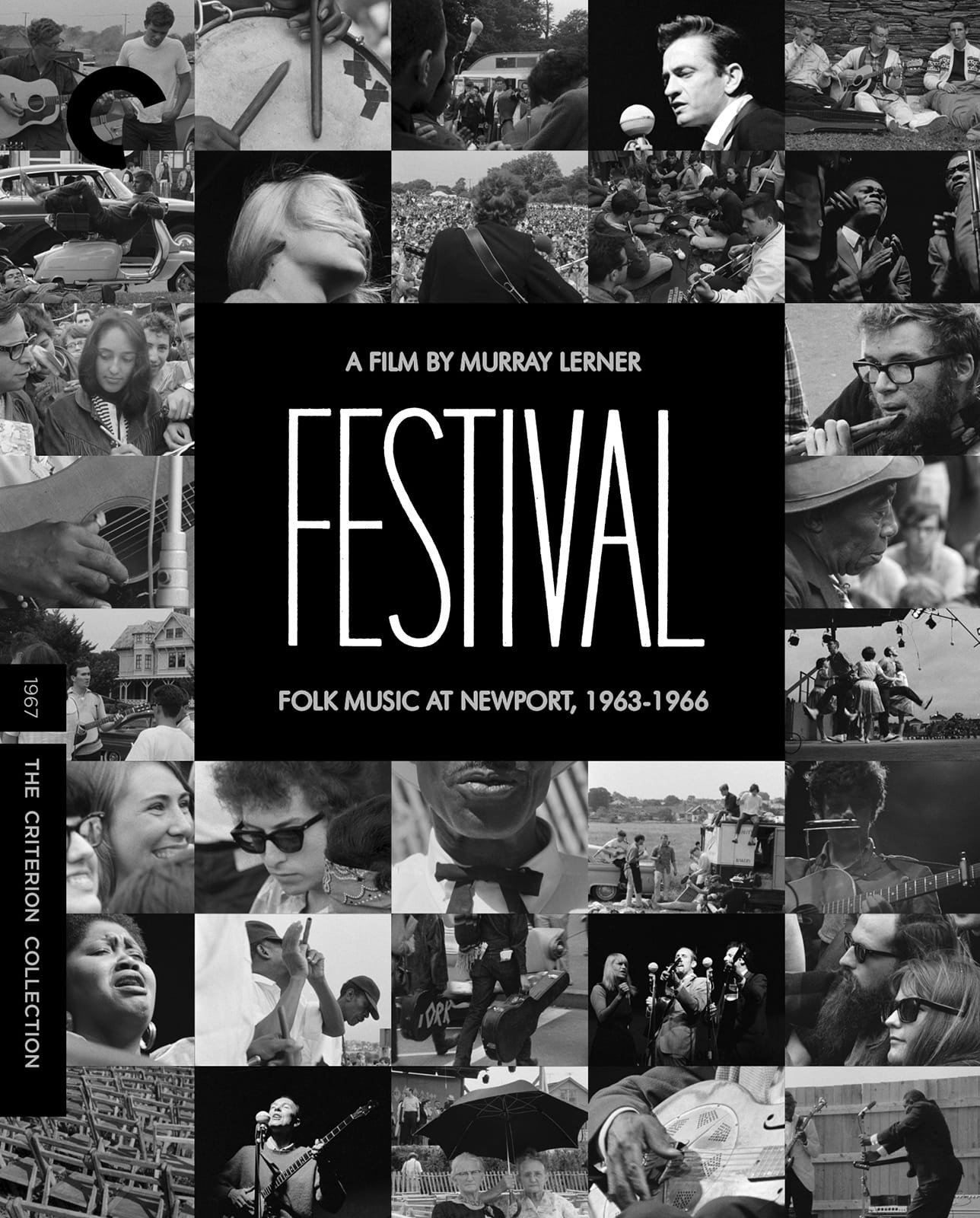 For a citizen of 2017, the most poignant recurring image in Murray Lerner’s Festival might be of the audience at the Newport Folk Festival, gathered around listening intently to the concert performances. Shot over the course of three festivals from 1963 to 1966, the film features a society that’s a ways away from cellphones and iPads. And the sight of people directly engaging with something in front of them, their attention largely undivided by ceaseless advertisements and vendors, suggests a lost communal oasis.

Like other influential documentaries that were at the right place at the right time, such as D.A. Pennebaker’s Don’t Look Back and Michael Wadleigh’s Woodstock, Festival brings to life a mythologized time, capturing the roots of its creation. The Newport Folk Festival offered a glimpse of the crystallization of the counterculture, in the wake of the racism and atomic fears of the 1950s and the already years-long war in Vietnam. Hair is starting to get shaggier in Festival, and communal ethos about art concerned with “real life” is frequently voiced, often with a self-righteousness that reveals why folk has been so frequently mocked as naïve hummingbird music.

When Ronnie Gilbert introduces Bob Dylan at the festival, she says, “I don’t have to tell you. You know him. He’s yours.” At this moment, it makes sense to a contemporary viewer why Dylan chafed at folk, which presumed to possess him and to dictate the terms of his art. In this context, Dylan’s “going electric,” which happened in 1965 at the Newport Folk Festival, and which Lerner also captures in the moment, feels inevitable—a battle cry insisting that his art is to be created on his own terms. Yet to even call this act a “battle cry” is to risk condescension, framing Dylan the way his early fans wish him to be framed. When watching this exhilarating electric rendition of “Maggie’s Farm,” one shouldn’t require any further justification for its existence.

Lerner captures the central riddle of the counterculture: Once it’s identifiable and unified, it’s officially a culture and exists at odds with itself. And when something’s a culture, that means it’s solid enough for capitalism to subsume it. Yes, the Newport Film Festival is a gateway to Woodstock and free love. Yes, it exists as a parallel to the blossoming civil rights movement. But it’s also an early stop on a tour that ends with massive arenas funded by Jiffy Lube.

The fans and musicians who appear in Festival are attuned to this danger of appropriation, which explains their defensive eagerness to “define” music in a manner that chafed artists like Dylan. These fears and exhilarations are expressed in a beautiful and terrifying image, over Festival’s opening credits, in which we see throngs of people filing into the grounds, looking eager and lively as well as effaced by the cumulative crowd. The American counterculture has a similarity with communism: a fetish for anonymity that ironically breeds conformity, which can easily beget tyranny. Dylan knew of this danger and rejected it. Over the course of the dreamy three years that Lerner shows us, the singer evolves from a shockingly youthful rising star to the prickly genius of yore, and this evolution—dramatized casually in a matter of a few dozen compressed minutes—testifies to the fleeting diaphanousness of social movements and life at large, recalling the magnificent speech about the 1960s given by Peter Fonda’s character in The Limey.

Festival also honors the beauty of folk music at its most intoxicatingly open and direct. Peter, Paul and Mary frequently appear, and Mary Travers is often captured under a spotlight, her blond hair glowing angelically. They play several of their hits over the course of the film, but “If I Had a Hammer” achieves a particular transcendence. The freedom of their earnestness feels alien in 2017; their willingness to preach of theoretically inarguable ideals like peace and tolerance suggesting an act of emotional nakedness that would feel increasingly daring as the counterculture moved into its decadent and hopeless phase. The Blue Ridge Mountain Dancers appear on stage at one point, and Lerner captures the thrilling percussive unison of their choreography as well as their touching conviction in their nerdy datedness.

Though a few landscapes revel in the sleeping habits of the festival-goers, Lerner includes few establishing shots, offering instead a sea of faces that celebrates the intimacy of the festival while providing a detailed anthropological survey of America. Watching this film, one’s immersed in hairstyles, T-shirts, dangling cigarettes, and close-ups of shoes and instruments. Using no text or narration, Lerner and his editors forge mini-narratives through crosscutting, contrasting Dylan’s aloofness with Joan Baez’s careful approachability, or Son House’s thoughts on the blues—“the real blues are no cause for no jumping”—with the worshipful praise of Mike Bloomfield, a white Jewish musician with the Paul Butterfield Blues Band who owns up to his act of appropriation, insisting that he can never plays the blues like Son House. It’s the matter-of-factness of Bloomfield’s respect that’s striking, suggesting the sort of cultural unity that folk hoped to achieve.

The blues creep into Festival’s final act, giving the film a jolt of painful grace. Watching a sea of white youth wax on America’s injustices is a fine way to spend one’s time, but strife appears to be predominantly theoretical to this portion of the population. The largely ignored African-American bluesmen and women are a different story, however, and their songs exude a casual vitality that the white musicians, excluding Dylan, are too achingly sincere to approximate. Rediscovered by Newport Folk Festival M.C. and fellow legend Pete Seeger after decades of obscurity, Mississippi John Hurt doesn’t have time for platitude. Remarking that he’s glad he’s got something the audiences want, Hurt launches into the blissfully sleazy “Candy Man Blues,” informing it with a gorgeously evocative voice that sounds like barbed wire coated in molasses. When the Staple Singers play “Help Me Jesus,” Lerner frames them in a pocket of darkness, a spotlight suggesting a hopeful star.

Festival offers a delirious feast of riches, functioning as a superb and valuable social document as well as an enveloping epic musical tapestry. Though Lerner’s subjects frequently discuss politics, the film itself is what one might call politically unpolitical. Lerner dramatizes a dream of social engagement that’s shorn of the meaningless and divisive sermonizing that characterizes much political discourse, while recognizing that the folk scene wasn’t devoid of its own hypocrisy. Folk’s project is revealed to be both admirable and absurd, as it strives to essentially purify American iconography, which is partially defined by its very disreputability.

The image on this Blu-ray boasts extraordinary richness and clarity, particularly when one considers the age of the film and the many variables that must be considered when restoring documentaries that have been shot with multiple cameras over several years. Blacks are painterly and whites are creamy, though a carefully modulated level of grain maintains the film’s gritty sense of tactility. This refurbished image has the effect of informing the many facial close-ups with hallucinatory vividness, as the singers are rendered against backgrounds that suggest X-rays in their stark contrasts of shadow and spotlight. One can make out pores in the subjects’ skin, and the textures of jewelry, musical instruments, and clothing are densely and precisely rendered. The soundtrack is equally remarkable, offering a multi-planed soundstage that honors the poetic fragility of the music and its highly varied sounds. The roughness of Bob Dylan and Johnny Cash’s voices is contrasted with the graceful lilt of Judy Collins and Joan Baez’s singing, and each instrument in each band isn’t only heard but felt.

“Making of Festival” and “When We Played Newport,” both produced by Criterion in 2017, blur together in the mind, collectively offering social context of America at the time of Festival’s making in the 1960s. The former, and more essential, program discusses Murray Lerner’s sense of narrative structure and the importance of the film as a document of the blossoming folk scene, which signaled the beginning of a new “youth” culture and attending political reverberations. Recording techniques are also discussed, and “When We Played Newport” contains archive interviews with the musicians. The booklet included with the disc also features a collection of artist biographies as well as a list of the order in which the acts appear in the film, which is of great use for those audiences, particularly younger ones, who wish to do further research on Festival’s subject matter. Also helpful are optional titles, selected with the subtitle button on your remote, that identify each artist and song as they appear in the film. Twenty minutes of inessential outtakes and an excellent essay by Amanda Petrusich round out a resourceful package.

A gorgeous restoration allows Festival to look both old and new, subtly insisting that our hopeful and tortured past is also possibly our present.