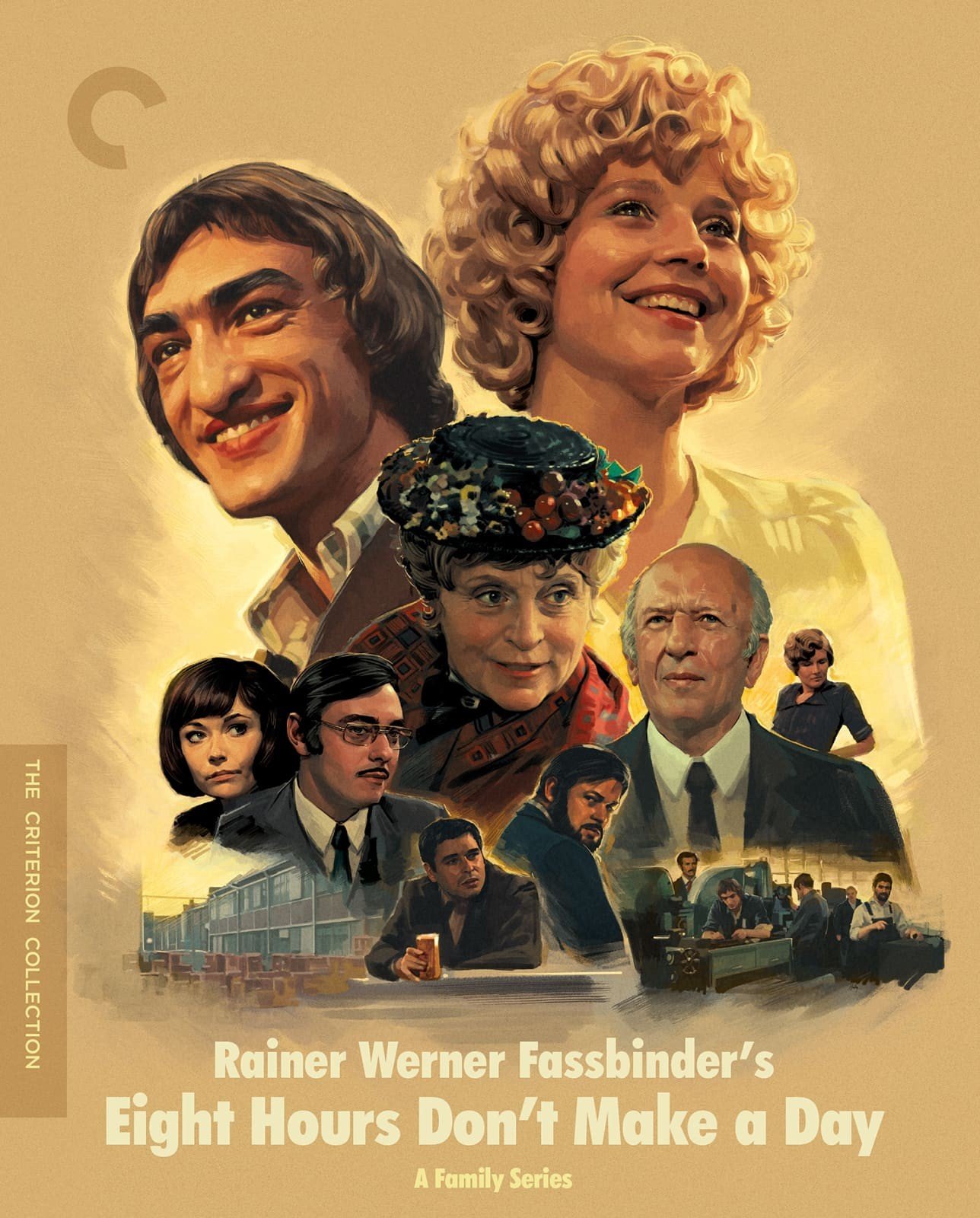 In Eight Hours Don’t Make a Day, the seeds of political activity are sown in kitchens, buses, bars, and beds. Rainer Werner Fassbinder shows a supple understanding of the intersection between the personal and the political in everyday life, as an argument with a family member over income can quickly beget revolution. The populace is a sleeping giant that doesn’t understand its own power—to the benefit of its oppressors. As a character in this miniseries poetically says: “Everyone’s somebody. Most people just don’t know it.”

Eight Hours Don’t Make a Day is an eight-hour family epic that aired in five parts on German television in 1972 and 1973, and which is just now debuting in the United States. Fassbinder was so prolific in such a short period of time that his filmography continues to reveal surprises, and this series fell roughly between the scalding The Bitter Tears of Petra von Kant and the visionary World on a Wire. In sensibility, though, Eight Hours Don’t Make a Day is more closely aligned with 1974’s Ali: Fear Eats the Soul, as they both root the traditions of American melodrama in the textures of West German working-class life, less than 30 years after the fall of fascism.

The legacies of fascism, and of the Allied occupation of Germany after WWII, cast a subtle pall over the miniseries. The characters drink in bars that play American music, and a poster of Elvis Presley hangs in a woman’s bedroom. A family matriarch, simply called Grandma (Luise Ullrich), is confidently her own being, given to whimsy that implicitly feels hard-earned. We’re somehow allowed to know that this woman has seen much worse days, and that she’s making the most of the comfort she’s been able to carve out for herself. Tellingly and quite poignantly, she says, “There’s never been nothing.”

In productions such as Eight Hours Don’t Make a Day, World on a Wire, and Berlin Alexanderplatz, Fassbinder exploits the television series format’s most fruitful distinction from cinema: its capacity for reveling in the prolonged, contrasting rhythms of life. If Eight Hours Don’t Make a Day was whittled down to a conventional two- or three-hour narrative, it might only concern Grandma’s grandson, Jochen (Gottfried John), as he meets his future wife, Marion (Hanna Schygulla), and wins a series of small battles at the factory where he manufactures machine tools. With eight hours, however, Fassbinder examines the fruits of potential revolution as well as the overriding ecosystem that breeds a mindset for change. Fassbinder offers a left-wing vision of conservatives who gradually embrace liberal ethos by coming to see how political stances viscerally affect their livelihoods.

Jochen undergoes a journey of personal awakening over the course of the miniseries, though Fassbinder doesn’t preach or jerry-rig the narrative to serve his own politics. Fassbinder is one of cinema’s great humanists, but he’s also a shrewd sociological comedian who disdains easy bromides. He casually makes nonsense of Randian ethos by showing the homes that permit Jochen, Marion, Grandma, and their extended families a sense of stability, which in turn give them room to think for themselves. The value of stable community—enabled by social infrastructures commonly associated with a vanishing idea of the middle class—is purposefully underrated by corporate-friendly politicians. Because “room to think” might not lead to a hopeless acceptance of “how things are”—and variations of this phrase are repeated in the miniseries as a mantra of conformity to be fought against and transcended.

Eight Hours Don’t Make a Day debuts in America at an imperiled time to remind audiences what real political filmmaking is. Such filmmaking isn’t a Marvel movie or an Oscar hopeful that’s been dotted with talking points out of a politically fashionable think piece; it’s art that invigorates dialectic with artistic spontaneity and a sense of the human quotidian, revealing the exaltations, the hypocrisies, and the irresolvable mysteries of life. Fassbinder dramatizes the effects of infrastructure on day-to-day living with warm, lively imagery, piquantly, sometimes profoundly free-associative dialogue, and with the varying paces of individual sequences. Work scenes are often staged briskly, with conventional televisual “coverage,” while scenes of personal reveries are slower and more openly framed, allowing us to feel the catharsis of getting loaded with friends as Neil Young plays on the jukebox.

Throughout the miniseries, daily quests merge the tricky riddles of politics with individual eccentricity. Looking for a flat she can afford with her lover—the kind, soft-spoken Gregor (Werner Finck), who’s more perceptive than he appears to be—Grandma devises a scheme to open a children’s nursery without the government’s knowledge, seizing and commandeering an abandoned library. (The building’s former identity is a political statement in itself.) Grandma, a free-spirited liberal in a conservative family who, along with Marion, encourages Jochen’s political awakening, is also understood to be indulging in lightweight fascism by taking the law into her own hands. The subplot is played for warm comedy, allowing the political reverberations to hit the viewer on the rebound, and climaxes with a lovely and resonant image of Grandma and Gregor asleep in one another’s arms after painting the library all night. In this moment, the library/nursery is what they truly wanted: a home for themselves that reflects and continues their senses of purpose.

Fassbinder delights in the little moments that embolden routine with a spark of possibility. Jochen meets Marion early in the miniseries at a vending machine, while the latter is attempting to buy a jar of pickles. Attracted to Marion, Jochen brings her to a family birthday party where Grandma pretends to know Marion. The kinship that Jochen and Grandma enjoy over the course of 472 minutes—as co-conspirators who respect one another’s similarities as well as their vast differences in respective cultures, generations, and sensibilities—is among the great pleasures of Eight Hours Don’t Make a Day. Grandma is the sort of smart, semi-crazy, boozy broad that anyone who’s lucky has had in their lives at a formative juncture. Grandma and the beautiful, empathetic Marion give Jochen stature by extension. He may have a conformist streak, but he’s smart enough to cherish amazing women.

The celebration of home and hearth, which serves as the thematic center of the miniseries, is explicitly connected to women. Grandma and Marion are the production’s iconic protagonists, while other women are celebrated as quiet heroes. Jochen’s mother, Käthe (Anita Bucher), who’s also Grandma’s daughter, is accorded no flashy scenes or subplots, though she provides the backbone of Jochen’s life, fixing the dinners that serve as settings for family debate and conversation. She takes care of business while Jochen, Grandma, and Jochen’s father, Wolf (Wolfried Lier), flamboyantly argue in thinly disguised expressions of love. In a moment that captures the sublime emotional madness of family life, Wolf misses Jochen so much that he throws his son out of the house when the latter eventually returns, which Käthe smooths over. She’s a superb negotiator, whose generous impartiality is often misread or taken for granted.

Which is to say that Fassbinder also captures the pain of recognizing that one’s essentially a supporting character in their own life, serving to bolster a more dynamic set of persons. This is Käthe’s pain, as well as the pain of Harald (Kurt Raab), the abusive tight-assed husband of Jochen’s sister, Monika (Renate Roland). In a less imaginative production, Harald would be a villain, a symbol of the conservative beliefs that the filmmakers disdain. But Harald’s shown to be imprisoned in his closemindedness, incapable of the lightness of spirit that allows Wolf to sporadically flourish. At a wedding reception—an exhilarating 25-minute sequence composed of tracking shots in which every other character ping-pongs off one another, broadening their horizons—we see Harald overdressed in a stiff tuxedo, marinating in loneliness.

In Eight Hours Don’t Make a Day, Fassbinder blends kitchen-sink realism with the feverish expressionism that would cement his legend, finding the best of both worlds: relatable, fastidiously detailed fantasy. When Jochen and Marion go out for a drink, Fassbinder frames them in an intoxicating close-up as she leans into his body for the first time. Such expressionism revels in the glories of formal beauty while capturing the distinct pleasure of being familiar with someone new. This scene also contrasts with the many stopovers that Grandma and Gregor enjoy at a local café for Schnapps and coffee, as they luxuriate in a sensuality of comfort and acceptance, or with the warm bonhomie of Wolf and Käthe dancing before the former gets loaded and decides to dance with everyone else at the party. Ornate multi-planed compositions, reminiscent of Josef von Sternberg’s films, contextualize characters in their settings while celebrating the bravura dexterity of Fassbinder’s showmanship. A vital missing link in a brilliant artist’s oeuvre, Eight Hours Don’t Make a Day reaffirms the most resonant ongoing assertion of Fassbinder’s career: that every life is worthy of a classic melodrama.

Eight Hours Don’t Make a Day was shot on 16mm, so it’s only natural that the image on this disc, sourced from a 2K digital restoration by the Rainer Werner Fassbinder Foundation, abounds in heavy grain. Some long shots, namely overheads of Jochen and his family as they eat, imbibe, and bicker, are a tad faded and teal-ish, but this is an otherwise spotless transfer, free of debris and boating rich detail and warm colors and skin tones. There isn’t much depth to the linear PCM mono track, but this is a film driven above all else by conversation, and the dialogue is clear throughout.

A 42-minute documentary from 2017, “Eight Hours Don’t Make a Day: A Series Becomes a Family Reunion,” sees actors Hanna Schygulla, Irm Hermann, Wolfgang Schenck, and Hans Hirschmüller reminiscing about the film and features striking behind-the-scenes footage from its production, as well as footage from various German TV programs in which the cast and crew, including Rainer Werner Fassbinder, discuss the film’s vigilant focus on the trials of the working class. In a 20-minute interview, film scholar Jane Shattuc attests to the empathy of Fassbinder, who was born into a middle-class family, while also drawing links between the series and some of his other work, namely The Merchant of Four Seasons. Finally, in the set’s accompanying booklet, scholar Moira Weigel adds political context to Eight Hours Don’t Make a Day, one of many “red parables” that were being commissioned in the early 1970s by the WDR television station, while also drawing the requisite comparison between Fassbinder and Douglas Sirk’s aesthetics. Especially insightful is Weigel’s correlation of the film to a Shakespearean comedy, for the way “all the right couples have come together.”

In Eight Hours Don’t Make a Day, Rainer Werner Fassbinder blends kitchen-sink realism with the feverish expressionism that would cement his legend.

Review: Everything Went Fine Is a Keenly Observed, If Too Neat, Euthanasia Drama

NewFest 2020: Dry Wind and Alice Júnior Take Aim at the Patriarchy in Brazil

Blu-ray Review: Ant-Man and the Wasp on Disney Home Entertainment