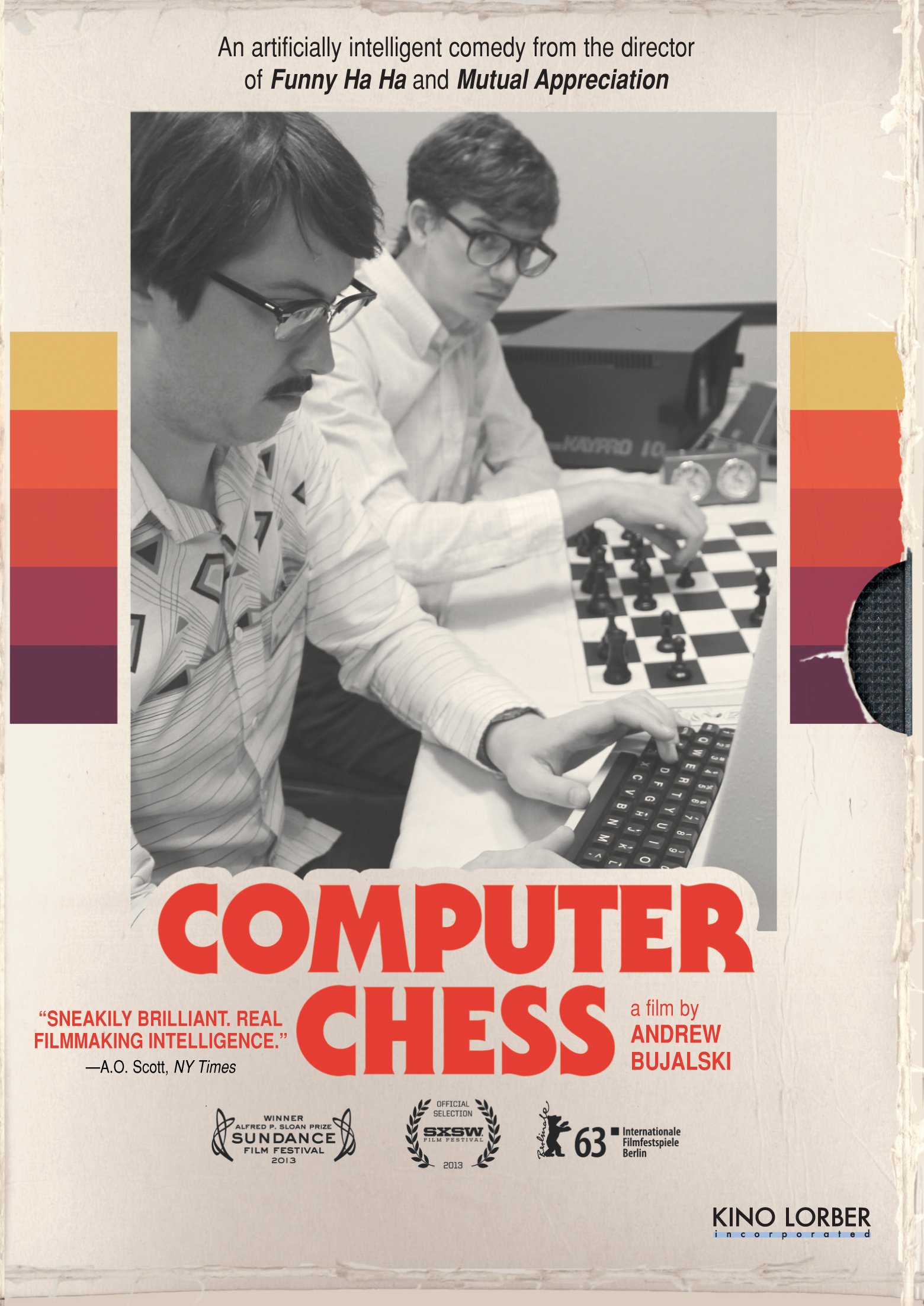 Andrew Bujalski forecasts Computer Chess’s eventual turn to the surreal well in advance of the narrative’s descent from a programming tournament into swinger parties and cat-filled hallways. The film establishes its tone with interviews of the developers who made the machines pitted against each other in games of chess, showcasing a range of antisocial nature in the generally monotonous tone of those speaking to cameras, from shyness to egotistical posturing. In nearly all of these early shots, superfluous characters hang in whatever distance plane is unoccupied by a cameraman or speaker, their faces frozen in apprehension as if wishing with every conscious thought not to be the next one to have to say something. David Fincher’s The Social Network imagined a world in which human relations have been reshaped by those with the least amount of social awareness, but Computer Chess suggests that the fate of humanity’s power relation to technology has always been in the hands of those who would find a computer world more comfortable than the living one.

A more obvious precursor to the film’s strange developments, however, is the instrument of its documentation. Set around 1980, Computer Chess is a period film that has the benefit of not merely recreating the look of the time within the frame, but to approximate the time period through the frame with the use of period-appropriate Sony AVC-3260 tube cameras. The cameras shoot in Academy-ratio black and white, with intervallic leaps in image quality sometimes within the same shot: the frame often spontaneously grows dim or bright based when the camera suddenly makes just the right angle with a light source; focus can suddenly shift without movement and seemingly without a conscious adjustment on the operator’s part; and numerous artifacts that replace the usual scratches and vertical lines of damaged film with fractal black spots and video snow.

To see a movie shot on this technology, neither organic film stock nor high-quality digital video, is to be trapped between worlds, an instant separation from aesthetic expectation that suits the increasingly warped narrative. But then, to use the term “narrative” would imply that even the ostensibly goal-oriented story of a tournament takes a linear path toward a conclusion. Yet the actual games of computer chess make up a small portion of the film, which devotes the rest of its time to stoned philosophical discussions on technology’s social and existential implications (held in room 420, natch), the midnight strolls between rooms of a marooned programmer whose reservation was botched, and a parallel convention of new-age swingers that juxtaposes the group of people developing machines that render sociality redundant with a group that celebrates a more liberated form of social behavior. The camera itself registers the clash of sensibilities, as when one lanky developer finds himself in the room of one polyamorous couple and bolts so quickly that a superimposition that fractures his sprint almost seems like an image flaw as the camera struggles to process movement that fast.

The dichotomy between the earthy hippies and the automaton nerds, with parallels of staged rebirths and the mounting worry that one group’s computer is achieving sentience, make for a thinly veiled view of competing viewpoints for humanity’s evolution, one that sees us returning to a more harmonious state with nature and one that does away with nature, and maybe even organic life altogether. Yet the film never lapses into simple commentary, instead playing up the humor that results from these strange personalities gathering in the same space. (Especially fun is the contrast of the swingers’ comfort with sexuality and especially female sexuality, whereas the programmers are so flummoxed to have a woman among their ranks this year that even the older organizer, played by critic Gerald Peary, habitually makes note of her presence as if Nessie showed up to the tournament.) As with the public-access style it imitates, Computer Chess simply exists in the weird spontaneity of the moment, one of the few American films of recent years to deserve to be called “independent.”

Given the quality limitations inherent in the film’s cameras, Kino’s DVD cannot avoid image issues, with its attendant dips in clarity and artifacts. Nevertheless, the film is still beautiful, with high-contrast blacks and whites as dutifully rendered by the disc as the rough edges, even though some of the black levels suffer from crushing. The sound is similarly chaotic, with dialogue spiking and falling as characters move in relation to microphones, and the two-channel stereo track keeps things as clear as possible.

Computer Chess boasts not one but two commentary tracks, neither of which involve a member of the cast or crew—or at least not an acknowledged one. The first brings in Deep Blue team member Murray Campbell to discuss the actual history of computer-chess programming. His track is informative, but as dry as you might expect, with only the occasional chuckle to suggest he knows that the film isn’t really, as he calls it early on, close to documentary. At the opposite end of the spectrum is a track featuring someone going by the name of Ken Osborne, billed as “an enthusiastic stoner.” If Campbell’s dense, esoteric information dump represents one part of the film’s odd humor, this track, filled with stumbles, half-understood plot and shot summaries, and even a copyright warning loudly laid over a sing-along, captures the sillier side. Additional extras include Andrew Bujalski’s funny crowdfunding video, a Sundance promo, and theatrical trailers, as well as overviews of reference games complete with brief commentaries and a tutorial for using the film’s tube cameras.