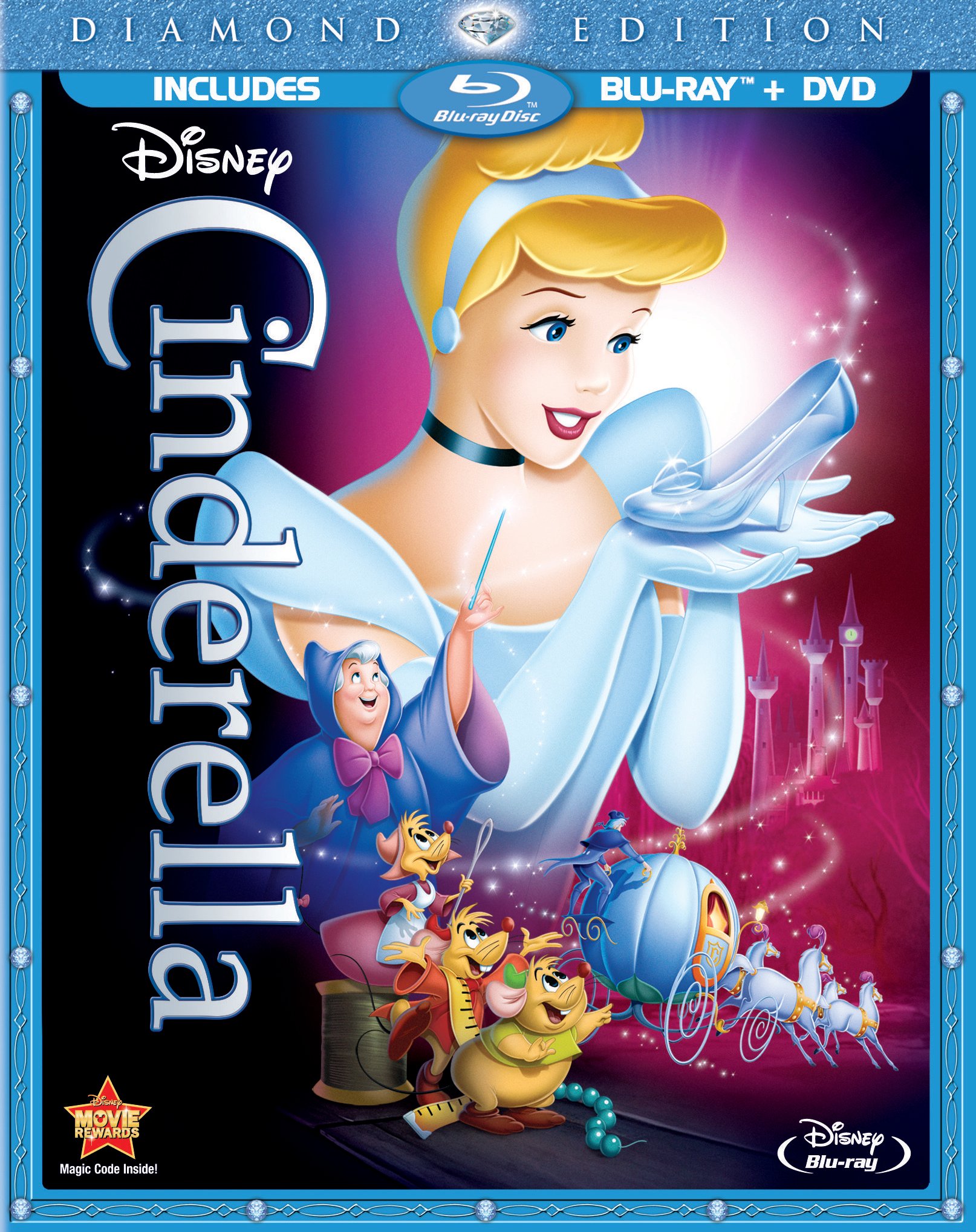 As with nearly all of the first wave of Disney animated features, the fantasy of Cinderella thinly disguises and provides momentary escape from a social ill. At the heart of Dumbo is a lilting lullaby of owning one’s perceived oddities and turning them into defining positives, and Lady and the Tramp stresses the importance of not letting one’s individualism harden into a way of distancing one’s self from friends and community. In the case of Cinderella, the thematic strands point toward notions of class and entitlement, many of which come directly from the source material of the same name by Charles Perrault.

Directed by Clyde Geronimi, Hamilton Luske and Wilfred Jackson, Cinderella is marked by the way it slyly shows a triumvirate of class systems within its fleet-footed 72-minute runtime. The only daughter of a late wealthy landowner, Cinderella (voiced by Ilene Woods) benevolently rules over a community of small woodland creatures (mostly mice, some blue jays) that help her with her chores and waking-up rituals, while she herself serves as busy housemaid, seamstress, and laborer to her wicked stepmother, Lady Tremaine (Eleanor Audley), and step sisters, Anastasia and Drizella (Lucille Bliss and Rhoda Williams).

Everyone, however, ultimately serves the King (Luis Van Rooten), who decides to throw a ball to find his son, Prince Charming (William Phipps, who acted the part, and Mike Douglas, who provided the character’s singing voice), a bride after little luck elsewhere, and there’s a sense in how the film is structured that Cinderella and Charming are merely pawns being moved by fate and the forces that be. For all his iconography, Prince Charming does very little more than yawn and dance in the film, and the animals, voiced most prominently by Jimmy MacDonald, exude more personality individually than Charming and Cinderella combined. It’s arguable that Lady Tremaine’s nefarious pet cat, Lucifer, has as much screen time as the eponymous heroin does.

Nevertheless, the story, which has nine credited writers, is largely remembered as a lead-up to Cinderella’s encounter with her fairy godmother (Verna Felton) and the grand ball wherein Cinderella loses her glass slipper. The second half of the film, which is made up of the ball sequence and the King’s search for Cinderella, is a much more tiresome affair than the lively first half, which doesn’t defer to simple wish fulfillment and, for that matter, features the better songs (the “Oh, Sing Sweet Nightingale” sequence is one of the dreamiest Disney has ever produced). There’s also an elongated, inventive scene in which the two lead mice, Jaq and Gus-Gus, face-off against Lucifer to get the makings for Cinderella’s ball gown.

The wish fulfillment that Cinderella offers is at once heartfelt and irksome. If one were to look at it in terms of class, the film sets up a dream scenario where the kind and giving win out over cruel, manipulative, and cheating taskmasters; a perceived ownership of those under you is, in the film’s view, an essential evil. As a feminist text, however, the film is, like most Disney films, a bit irritating: It takes the love of a preposterously rich, all-powerful man to finally allow Cinderella’s self-possession to take full bloom. Still, this is essentially the writing on the wall with Disney, and isn’t nearly as brazen about its philosophical faults as, say, Sleeping Beauty. Thematically, Cinderella preaches something far more easily tangible and relatable to the everyday than a flying elephant, romantic pooches, or mining dwarves: respect and understanding for hard work and those who tirelessly labor with no need for false praise or special consideration.

As is often the case with Disney’s Blu-ray output, Cinderella makes full use of what distinguishes Blu-ray from DVD. Compared to the DVD release of Cinderella that was put out years ago, Disney’s Blu-ray of the film boasts bolder colors and exquisite clarity that perfectly highlights the sustainability of the work done by Disney’s animators in the 1940s and ‘50s. From the pinks and blues of Cinderella’s dresses to the smattering of colors in the King’s palace and bedroom, Disney’s transfer highlights the sheer wondrous visuals that often powered Disney’s early pictures past the limits of the written storytelling. The audio is equally excellent, as all the songs ring out with power and clarity along with the dialogue. The score and effects sound strong in the background, but the muscularity of the songs (rightly) dominates this exquisite transfer.

A great deal of the featurettes are actually holdovers from the DVD, but they still add up to quite a lot of detail about the long road it took to bring Charles Perrault’s classic to the big screen. For the Blu-ray, there are a handful of additional featurettes as well, including a focused look at the fairy godmother and a lovely short involving Christian Louboutin. The deleted scenes and the alternate opening sequence are both shown in storyboard form, but remain fascinating insights into roads not taken by Walt Disney and his team. Disney’s daughter, Diane, offers a warm intro to the film and there’s an audio-only version of the film with all the songs and some songs that were cut. Storyboard-to-film comparisons, the DisneyView feature, the digital storybook, excerpts from The Mickey Mouse Club and an old Laugh-O-Gram are also included.

Class and femininity are of distinct thematic interest in Cinderella, and while Disney’s excellent Blu-ray release of the film doesn’t really offer a discussion of said themes, it does provide a brilliant A/V transfer and a deluge of relevant extras to make up for it.