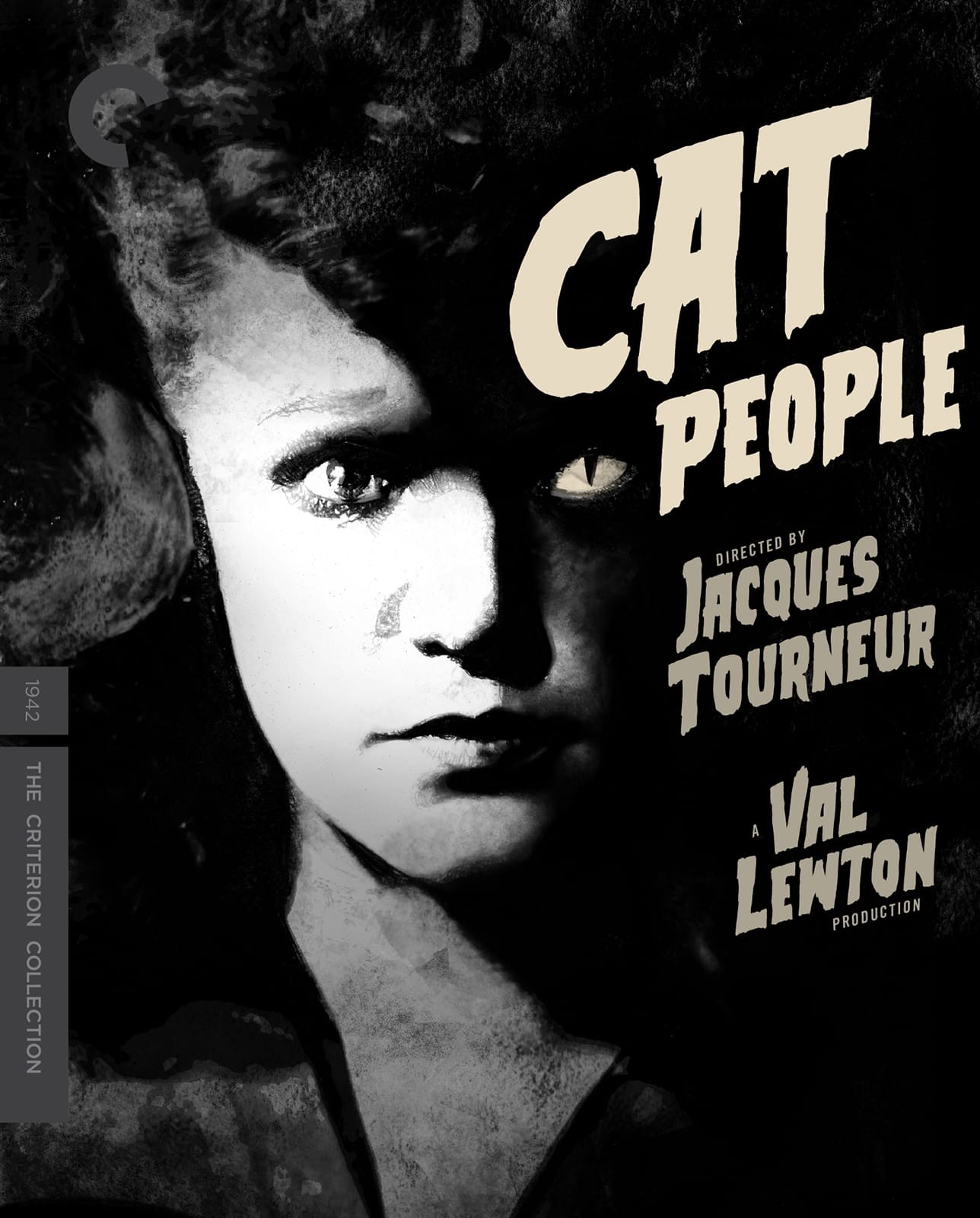 Producer Val Lewton was a practitioner of the kind of suggestive horror film that seeps gradually into one’s bones, haunting us long after we’ve seen it and for reasons that might not be readily explicable. Working on skeletal budgets for RKO Pictures, Lewton and his collaborators bring to mind a paraphrasing of something famously said of the music of Miles Davis: the notes that aren’t played are as important as those that are. Their films are lush and spare, suggestive yet reductive, simple yet inscrutable. Silence is often a pivotal element, held for long periods of time to achieve an aura of existential dread and loneliness. Lewton’s productions don’t abound in the gothic claptrap that was common to the mainstream American horror film of the 1940s; they’re often domestic dramas with a tinge of the supernatural, which heightens a subjective mood of melancholia. One stews in Lewton’s films, feeling as if they could wander around within them.

Cat People, Lewton’s first and most famous title for RKO, as well as a collaboration with the elegant director Jacques Tourneur, weds avant-garde symbolism with a variation of the classic story of the were-creature. It begins with boy meeting girl: At the Central Park Zoo, Irena (Simone Simon) tosses a sketch toward a trashcan, attracting the attention of Oliver (Kent Smith), who strikes up a flirtation with her. Irena is drawn to the cage of the panther, returning to see it throughout the film, and it comes to suggest the dark heart of her mania and torment. Tourneur even positions the cage in the middle of the frames, the large cat pacing within its enclosure like a stifled demon.

It doesn’t take long for Irena to tell Oliver of her obsession with the bestial power that she believes to be inhabiting her—a suspicion that we accept for Simone’s extraordinary feline qualities, particularly her oval eyes and sloped cheeks, which the filmmakers point up with sculptural chiaroscuro lighting. Born in Serbia, Irena discusses a statue she has in her apartment of King John, who drove the devil-worshipping Mameluks out of the country, though she notes that the craftiest of them escaped to the mountains. This intensely eerie speech—a case of exposition actually heightening a horror film’s mood rather than dampening it—casually scans as a parable of the id and superego.

The statue of King John placed in Irena’s apartment shows a cat impaled on the ruler’s sword, and the audience is told that the witches of these villages were cat people—women who turned into cats when sexually aroused or provoked into jealousy. Irena is torn between the cat at her emotional center and the morals pounded into her culture by yet another white Christian savior. The cat obviously represents the id, and King John the superego. But where’s the ego? Perhaps Irena doesn’t have one.

The resonances in the narrative are elusively dense, particularly for such a trim and unpretentious film. Stories of were-creatures are so inherently suggestive of social and physic trauma that they can mean anything an artist or an audience wishes to assign to them. Cat People is aware of the irony that King John might not be the savior that Irena suggests, as he might have simply imposed his own kind of rule, and this possibility informs how we perceive Oliver and, later, Dr. Judd (Tom Conway), the psychiatrist who takes on Irina as a patient only to immediately commence in hitting on her.

Irena might be the literal monster in Cat People, but she’s also an immigrant woman who’s manipulated and batted around by men of authority who’re mostly concerned that she gentrify in accordance with American urban culture. Because Irena is afraid to have sex, given what she thinks she may be, the film is a coded tale of a frigid woman in need of conditioning. Irena faces a hypocrisy familiar to all women: She’s relentlessly pressured by puritanical society to be chaste, yet resented when she doesn’t sexually gratify men. Tom marries Irena, but strays toward his co-worker and friend, Alice (Jane Rudolph), who represents an ideal of the franker, more accommodatingly sexual and easygoing modern woman.

Lewton and Tourneur don’t overtly psychoanalyze their film, as these nuances are embedded in the narrative primarily as free-associative subtext. This subtle, glancing trust in our ability to read the true story between the lines is pivotal to Cat People’s sense of being simultaneously vague and explicit, succinct yet freighted with baggage. The themes exacerbate the primordial obsessiveness of the hard, prismatic shadow imagery. Dozens of images can be taken as puns on the hidden human nature that must be expunged so as to please convention, and on the rage that springs from this expunging.

Most famously, there’s the sequence in which Irena stalks Alice around a swimming pool, with the shadows on the walls, and the contrast between the lit water and the dark room suggesting the physicalizing of neuroses in a fashion that’s familiar to noir. This contrast is repeated near the end of the film, when a panther corners Oliver and Alice in their office, the light from their drafting desk pinning them to the wall, exposing them as inky darkness encroaches. The film’s final punchline settles Irina’s internal and external battles on a tragic and infuriating note: Finding Irena dead, Oliver proclaims to Alice that she wasn’t lying to them about her curse. His wife destroyed, and this is all that matters to this man. That she honored him.

Like Criterion’s recent restoration of Carnival of Souls, this transfer of Cat People will be a revelation for younger audiences. The blacks in this edition have a lush and deep vastness that was only implied by the prior barebones DVD most commonly available to American audiences before this release. The whites are far more expressive as well: hard, angular, and almost violently tactile. Facial textures are occasionally a little soft, but that scans as inherent to the soft lighting purposefully used to cast a sense of dreamy subjectivity. An attractive sheen of grain remains on the image, giving the film a slightly, appealingly rough texture. And the new soundtrack intensifies our awareness of the small diegetic sound effects (most chillingly, the dripping of water), which, in turn, intensifies our sensitivity to the film’s profound use of extended silences. Dialogue seems a little muffled at times, but this is a quibble. This presentation is gorgeous and potentially perception-altering.

A 2005 audio commentary featuring film historian Gregory Mank, with excerpts from an audio interview with Simone Simon, offers an abundance of historical context pertaining to Val Lewton’s rise within RKO Pictures after the studio panicked over Citizen Kane’s lukewarm reception. The studio’s new motto was famously “showmanship in place of genius,” though Lewton rendered this aim ironic by producing profitable horror films that appear to be heavily inspired by Orson Welles’s, well, genius. Mank provides well-researched biographies of the film’s various actors and craftspeople, and astutely discusses the subtle yet overwhelming amount of symbolism abounding in the imagery.

More exciting is an interview with director Jacques Tourneur conducted just a few months before he died in 1979, in which he drolly discusses his approach to filmmaking, most memorably his insistence on cinema as an art of “contrasts,” whether in the lighting, or the performances and likenesses of the actors. Like Hitchcock, Tourneur has pronounced contempt for the presentational blandness of television productions of the time.

A new, poetic interview with cinematographer John Bailey, who shot Paul Schrader’s Cat People remake, likens the Tourneur film not to German expressionism, but Russian constructivism, abounding in geometric images and sharp and hard light. Bailey describes the film’s elusive power and rigorous formality as well as anyone this critic has personally read or heard. Rounding out this terrific package is Kent Jones’s evocative Val Lewton: The Man in Shadows, which suggests a Lewton film with the producer himself as the protagonist, an essay by critic Geoffrey O’Brien, and the theatrical trailer.

Cat People is a sex tragedy in horror-film drag, and Criterion has restored it to its full, brutally beautiful glory.