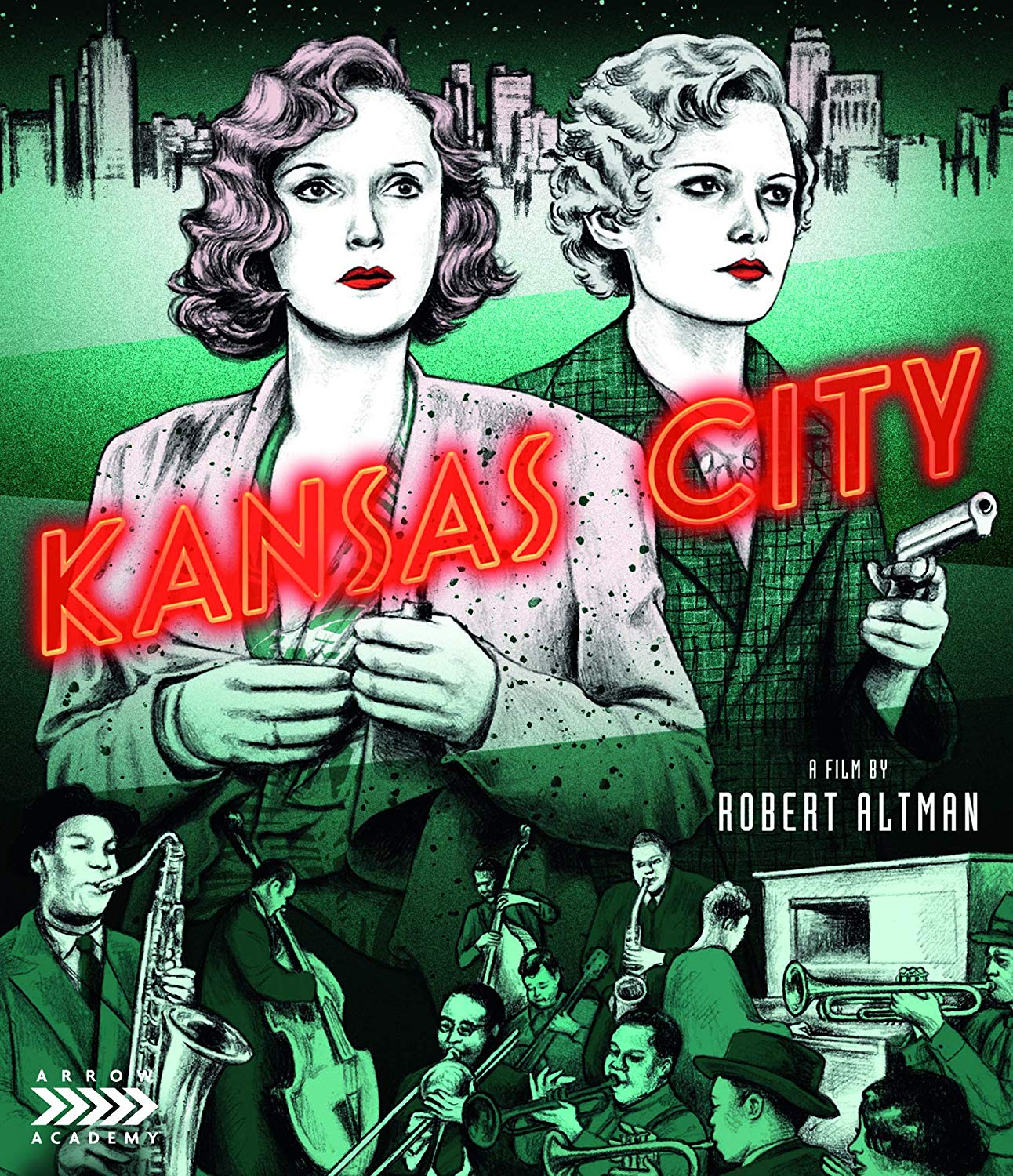 Robert Altman vividly brings to life childhood memories of his hometown in 1996’s Kansas City. But this is no mere exercise in wistful nostalgia, as the filmmaker is irresistibly drawn to the seedy underbelly of the titular Missouri town, its garish neon-lit nightclubs and swinging jazz joints. From there, the film spirals out into one of Altman’s signature network narratives, using its sprawling cast of characters to investigate political corruption, race relations, and the effects of mass media on the public. Kansas City is also an unabashed love letter to 1930s jazz music, which plays almost uninterruptedly throughout the film. This allows Altman to bring in contemporary jazz musicians to portray historical figures like Count Basie, Lester Young, and Coleman Hawkins.

Kansas City opens with a kidnapping. The fact that kidnapping was considered the prototypical crime of the era is later a topic of discussion between kidnapper and kidnapped, who bizarrely seem to bond over the fate of the Lindbergh baby. For its first 20 minutes or so, the film utilizes a disorienting nonlinear structure that incrementally fills in the whys and wherefores that lead noticeably non-blonde flapper Blondie (Jennifer Jason Leigh) to waylay laudanum-dependent society lady Carolyn Stilton (Miranda Richardson) at gunpoint. Mr. Stilton (Michael Murphy) is a local politico with some pull in New Deal-era Washington, and Blondie hopes he can help save her man, Johnny O’Hara (Dermot Mulroney), who’s gotten in over his head with nightclub owner and gangster Seldom Seen (Harry Belafonte).

Kansas City hopscotches between these characters (among others) and their various milieu. Part of the film’s enjoyment lies in discovering their interrelations and crossed intentions. To take just one example: Blondie’s brother-in-law, Johnny Flynn (Steve Buscemi), is instrumental in bringing in dozens of fraudulent voters to cast their ballot in the upcoming election. When she explains the scam to Carolyn, the latter seems incredulous that both parties would engage in those sorts of tactics. To which Blondie cynically, if quite rightly, replies: “Democrats? They’re what they’re paid to be. This is America, lady.”

The opening section of the film takes place in the Union Station terminal and, fittingly, given the name, most of the major characters can be seen crossing its cavernous spaces, though it will be some time before we are fully aware of who they are and what they’re up to. We’re also given verbal (radio announcements) and nonverbal (signage) information that’s key to understanding the sociopolitical events that are about to transpire. This setup is very similar to Altman’s use of the airport terminal at the beginning of Nashville, to which Kansas City can be seen as a modest, yet equally incisive, companion piece.

Much like Fritz Lang, Altman is fascinated by the ways that various media link individuals. Communications technologies like the telegraph and telephone play an integral part in moving the plot along. Blondie’s social aspirations are encoded in her adoration for film actress Jean Harlow (another Kansas City native), whom she seeks to imitate late in the film by dying her hair platinum blond. Her house is plastered with photographs of Harlow torn from numerous fan magazines. Earlier, while they’re waiting to be contacted by Stilton, Blondie takes Carolyn to see Harlow’s recent talkie, Hold Your Man, and Blondie can barely tear her eyes from the screen, even when more pressing business awaits.

Johnny O’Hara spends most of the film in the Hey Hey Club basement being reprimanded by Seldom for his criminal audacity. Johnny robbed one of the club’s high-stakes gamblers while wearing blackface, a twofold offense for which Seldom takes his time figuring out the proper punishment. Along the way, he has a lot to say about the acquisitive and destructive attitudes of white society. Johnny reveals his glaring misapprehensions regarding race relations in his appeal for employment instead of assassination, during which he foolhardily claims that his life is somehow worth more to Seldom than his black accomplice’s was.

Again like Nashville, Kansas City concludes with a shocking act of violence. Only this time Altman doubles down with the cruel fate that awaits both Blondie and Johnny. Johnny is quite literally deprived of the guts that he’s so boldly bragged about possessing. And, responding to Blondie’s hysterical breakdown at Johnny’s demise, Carolyn coldly puts her down like you would a horse with a broken leg. It may be a mercy, but it’s one where the dissimilarity between killer and killed reveals a vast existential gulf. This divide is put even further in boldface by Carolyn’s final line of dialogue, once she’s finally reunited with her husband. Over at the Hey Hey Club, the band plays Duke Ellington’s “Solitude,” while the lights dim, and Seldom Seen silently counts out his daily take.

Arrow’s Blu-ray of Kansas City improves by leaps and bounds over the 2005 DVD from New Line. Though the image is often dark and sometimes a bit soft, the HD transfer satisfyingly captures all the fine period details of costumes and décor. The nightclubs’ neon lights really pop, and color saturation overall is far richer than it was on New Line’s DVD. Grain levels are finely resolved and never chunky. The Blu-ray offers both the original stereo mix and a repurposed surround sound track. The latter provides some roomy spatialization for the almost continuous jazz music on the soundtrack, as well as some impressive canalization of sound effects like ringing gunfire and the clacking of dogs’ nails on parquet flooring.

Arrow offers an excellent selection of extras archived from both the earlier New Line release as well as a French-language release from 2007. On his commentary track, Robert Altman leans into the childhood memories of his hometown that informed his script. He talks about how the production designers reconstructed the era, describes his early exposure to jazz music, relates some amusing production anecdotes, and gets philosophical about his cinematic and existential influences. Two featurettes briefly explore the film’s evocation of period detail and the era’s musical culture. A DVD-era EPK has tantalizing snippets of interview with many of the cast and crew and some behind-the-scenes footage. French critic Luc Lagier provides a concise intro to the film, as well as an appealingly poetic reading of its themes of interconnection and disjunction. Arrow also tacks on a new bonus feature: an on-camera interview with critic Geoff Andrew, who begins by describing “the Altman style” (overlapping dialogue, roving camera), then provides a brief outline of peak-period Altman titles. Andrew goes on to discuss Kansas City’s depictions of class and race, the film’s rather cynical portrayal of the political process, and its skeptical take on the influence of the media.

A criminally underrated late-period Robert Altman film gets a burnished Blu-ray upgrade from the Arrow Academy, as well as a full slate of fine extras.