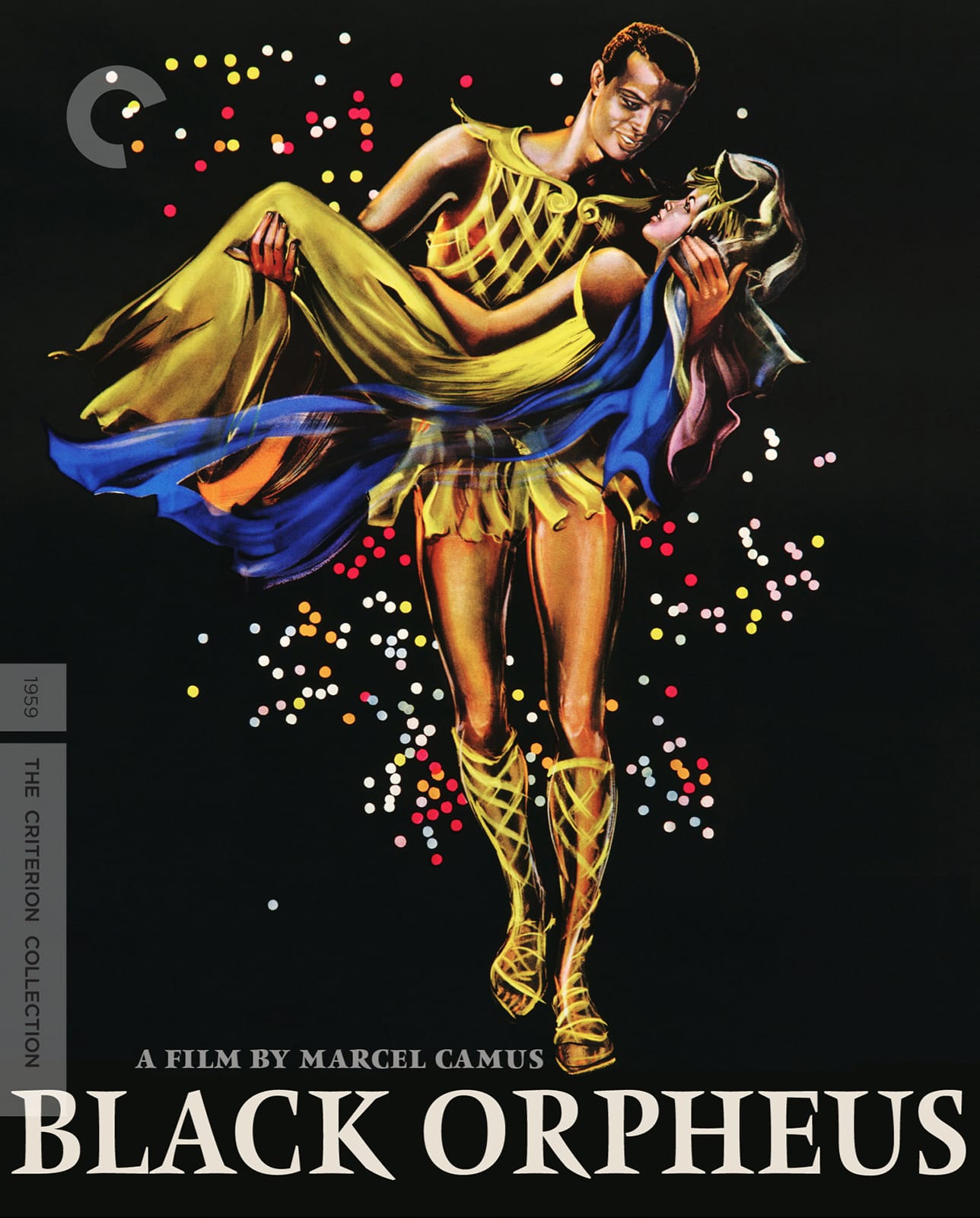 During a telling scene early in Marcel Camus’s vibrant film Black Orpheus, a wise trolley conductor named Hermes (Alexandre Costantino) utters a prophetic statement about the formidable allure of Carnival in Rio de Janeiro: “No one can resist the madness.” Eurídice (Marpressa Dawn), the beautiful young exile on the receiving end of this statement, reacts with a calm but hesitant smile, unsure of the evolving whirlwind of color, music, and movement engulfing her surroundings. Even amid the impressive celebration about to explode, Euridice can already feel the palpable darkness grabbing hold beneath this collective jubilee of artifice. Black Orpheus taps into this keen juxtaposition of tones, as Camus and co-screenwriter Jacques Voit contrast the expectation of love with menacing symbols and warnings. The filmmakers develop the classic Orpheus myth into a layered modern tapestry of Bossa Nova, outrageous costumes, and carnal knowledge, constructing a fluid musical consumed by textures of all kinds.

From its opening long shots of the epic mountains overlooking Rio, Black Orpheus quickly becomes a powder keg of energy and apprehension, a dual force of nature at peace with both the sudden flowering of love and the slow build of tragedy. This dynamic stems from the relationship between Orfeu (Breno Mello), who’s unadulterated womanizing seems almost an afterthought, and the beautiful Euridice, who’s antagonized by Death, a man in a skeleton costume stalking her every move. Yet these powerful problems are always counteracted, even devastatingly muted by the lush depiction of simple life both in the hillside dwellings above the city and the crowded streets within the downtown cityscape. It seems poverty is just a word, not an epidemic, and Camus favors the heightened state of adulation and celebration rather than the real life plights of starvation or murder.

Like many vintage young lovers on the cinematic border between fairy tale and reality, Orfeu and Euridice connect on an instinctual level, communicating through song, dance, and knowing facial expressions. Calling theirs a blind romance would be an understatement, but the naïveté shared between Orfeu and Euridice is what makes the entire mosaic of rich and shifting mise-en-scène so fascinating to digest. Competing colors pop from every angle, as dancing bodies gyrate, pulsate, and contort in all directions at once. Extravagant costumes and uniforms build a rainbow of momentum around each dance sequence, filling in gaps with curious children in love with the mythological characters these adults represent. Orfeu is not just a trolley conductor, but also labeled The Sun by one young admirer (Orfeu carries a huge gold orb as at the centerpiece of his costume). In this sense, people of all kinds become entranced by the idea of experiencing personal expression on a communal and mythological level, even if their sadness occasionally disrupts the party. Throughout most of Black Orpheus, time slows down to a lovely crawl, allowing the viewer to soak in the majesty of Camus’s extreme wide-angle vision of performance. Temporality fades to the background, allowing an entire city to dance in one fantastical wave.

Once the massive pre-party finally culminates into the epochal Carnival, Orfeu and Euridice transcend their human selves and become icons, the latest human incarnations in a long string of emotional cycles brimming with unrequited love and bitter irony. Orfeu even understands this cyclical notion during a lovely conversation he shares with two young observers. The handsome musician strums his guitar and quietly says, “There was an Orpheus before me, and there will be one after me.” Camus never distills the humanity and intelligence behind this statement, even as Orfeu descends into madness during the film’s fatal final act. But the wisdom sticks, and it’s no surprise his mentor Hermes shows up again during Orfeu’s darkest hour to quench his thirst for sage advice. Ultimately, Orfeu begins to understand the gravity of Euridice’s pure existence on both him and his community. When Orfeu carries her lifeless body up the gigantic hill to their now discombobulated shantytown, Camus focuses on this understanding, contextualizing the haunting dimensions of dance, texture, and color that have come full circle and defined both life and death.

Black Orpheus stands alone as a glorious window into the power of positive energy, pinballing between receiving parties to eliminate the daily grind of reality by tapping into a dynamic annual magnification. The film’s rousing music, its hallowed interpretation of classic Greek mythology, and its uniquely human interactions create a special interpretation of communal imagination and resolve. Yet at the center of this beating revisionist heart lies a stylistic mayhem yearning to burst free from every frame, best on display in the opening scene when the stoic marble statue acting as a title card shatters with a burst of fantastic editing, revealing rhythmic drumbeats and guitar melodies as the heir apparent to classic Greek mythology. Camus looks between the musical notes and beneath familiar historical readings to find an endless procession of young lovers fated to experience passion, guilt, and regret no matter their location or time period. And despite afflicted endings and uncertain beginnings, there will always be another Orpheus willing to pick up a guitar and strum the sun over the horizon.

Black Orpheus pops off the screen with a brilliant labyrinth of colors, shades, and shadows moving in one grand display of celebration. The Criterion Collection has devoted a newly minted hi-def transfer to revealing the subtleties and dynamics of this complex array of visual and audible aesthetics. Each character evolves in stunning clarity, whether it is Orfeu’s gold Carnival costume reflecting light on his surroundings or Euridice’s feathery blue tassel marking her location in a sea of shifting bodies. Glossy, dense, and incredibly buoyant, Carnival represents the apex of whimsy in this massive celebration, and Black Orpheus revels in the hysteria temporal and spatial relations. A few sequences seem to display a red and yellow tint, print flaws hovering over the brilliant visual color schemes and camera movements. But the real star of the show is the music and sound design, expertly mixed for the viewer to enjoy every nuance of audible expression competing for dominance in a frenzied crowd of excitement.

“Brazil is the easiest place in the world to be French.” So utters Black Orpheus director Marcel Camus in a short 1959 interview at the Cannes Film Festival, a direct rebuttal to Henry Georges Clouzet’s assertion that it was impossible to film in the country. It’s the most interesting thing about the faint interview that leads off the second disc of Criterion’s re-release, which is tagged alongside another fleeting fireside chat with star Marpessa Dawn in 1963. Also on hand is an interesting 16-minute short entitled “Revisiting Black Orpheus” with film scholar Robert Stam touching on the film’s cinematic representation of blackness, folklore, and experimental dance. But the centerpiece of the second disc is a 2005 feature length documentary called “Looking for Black Orpheus” analyzing the deep influence of the film on modern Brazilian culture. There’s also a feature called “Black Orpheus and the Bossa Nova Sound!” adds insight to the film as an international musical phenomenon. Lastly, IFC.com and Sight and Sound film critic Michael Atkinson provides an impassioned and enthralling essay on Black Orpheus in the liner notes, touching on everything from the film’s aesthetic and thematic importance to its emotional impact on audiences both past and present.