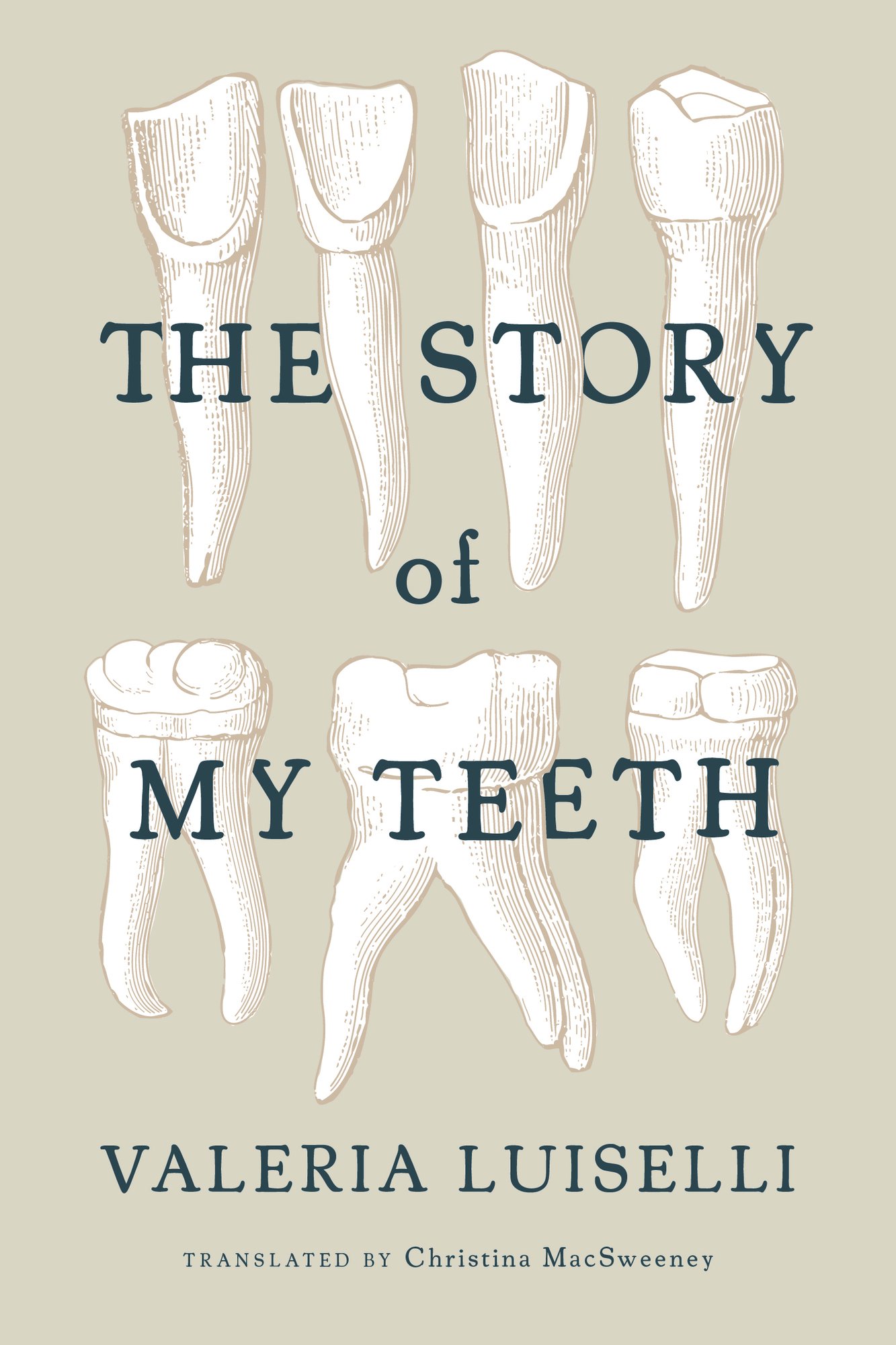 There’s a refreshing simplicity to Valeria Luiselli’s The Story of My Teeth, beginning with its title. Indeed, the eight sections that make up the book tell precisely that: the story of Gustavo “Highway” Sánchez’s teeth. In his own words, he’s “the best auctioneer in the world,” and on the first page of his dental autobiography he tells us that “this is the story of my teeth, and my treatise on collectibles and the variable value of objects.” From that sentence onward, we’re alerted that the seemingly simple story of Highway’s choppers—both his original crooked bunch and his later set, said to have belonged to a famed Hollywood icon—will be interwoven with a larger meditation on the arbitrary nature of language and the commodification of art.

Those are lofty goals, especially for a book (“novel” seems much too rigid a generic term for it) that so relishes the particular details of Highway’s idiosyncrasies, and which so lovingly paints a portrait of the Ecatapec neighborhood in Mexico City where the protagonist resides. But shuttling between the quotidian and the transcendent, between the earthly and the intellectual, all the while disrupting those very tenuous categories, is precisely what makes The Story of My Teeth so engaging. It also speaks to the way the book itself was written. As she explains in an afterword, Luiselli was commissioned to write a work of fiction for the catalogue of The Hunter and the Factory, an exhibition curated at Galeria Jumex:

“The Jumex Collection, one of the most important contemporary art collections in the world, is funded by Grupo Jumex—a juice factory. There is, naturally, a gap between the two worlds: gallery and factory, artists and workers, artwork and juice. How could I link the two distant but neighboring worlds, and could literature play a mediating role?”

The Story of My Teeth is the answer to such a question, a product of Luiselli’s collaboration with factory workers whose stories and anecdotes are laced throughout, usually within Highway’s many meandering flights of storytelling. Not for nothing is he the greatest auctioneer in the world; nothing, it seems, is beyond his knack for extemporizing. Take for example his opening line when attempting to sell a billboard featuring a horse: “Everyone knows that horses have no compassion, I told Alan Pauls. If a horse sees you standing in front of it, crying, it just chews its hay and blinks.” Highway’s long monologues are in themselves pieces of art that Luiselli showcases in hopes we’ll bid for more.

Language, its uses, its beauty, its arbitrary nature, becomes the heart of Highway’s story. You see this constantly in the way Luiselli’s text is structured. She juxtaposes a Bertrand Russell quote on signification (“If ‘the author of Waverley’ meant anything other than ‘Scott,’ ‘Scott is the author of Waverley’ would be false…”) with a fortune cookie (“There never existed a philosopher who could bear the pain of a toothache with patience” one reads). She uses a Voltaire quote as a caption for a picture of a disco bar in Mexico City: “Originality is nothing more than judicious imitation: the most original writers borrowed one from another.” This is a text that wants you to question its very construction even as it seduces you with its engaging prose.

More thrillingly, this is no mere “translation.” Luiselli’s English version has an extra chapter than the original Spanish, one written by Christina MacSweeney, her English translator. Rather than merely try and replicate her work in a different language, Luiselli (who’s fluent in English) puts the very heady ideas that populate her text into action. Language in translation, both rigid and fluid, allows her and MacSweeney to craft a new chapter that’s both an addendum and an integral part of The Story of My Teeth.

It also speaks to Luiselli’s own fascination with the way languages and texts travel, finding only in their readers any sense of stability. MacSweeney’s chronology chapter toys with the very expectation of a translation as a helpful guide, contextualizing the history that undergirds Highway’s story, from 1938, when “President Lázaro Cárdenas announces the nationalization of Mexico’s petroleum reserves,” to 2013, when “The Fundación Collección Jumex opens its exhibition El cazador y la fábrica.” It’s a fitting end to a text fascinated with the making the labor involved in writing visible and for that approachable.

Valeria Luiselli’s The Story of My Teeth is now available from Coffee House Press; to purchase it, click here.

Of Light and Darkness: Brian R. Jacobson’s Studios Before the System