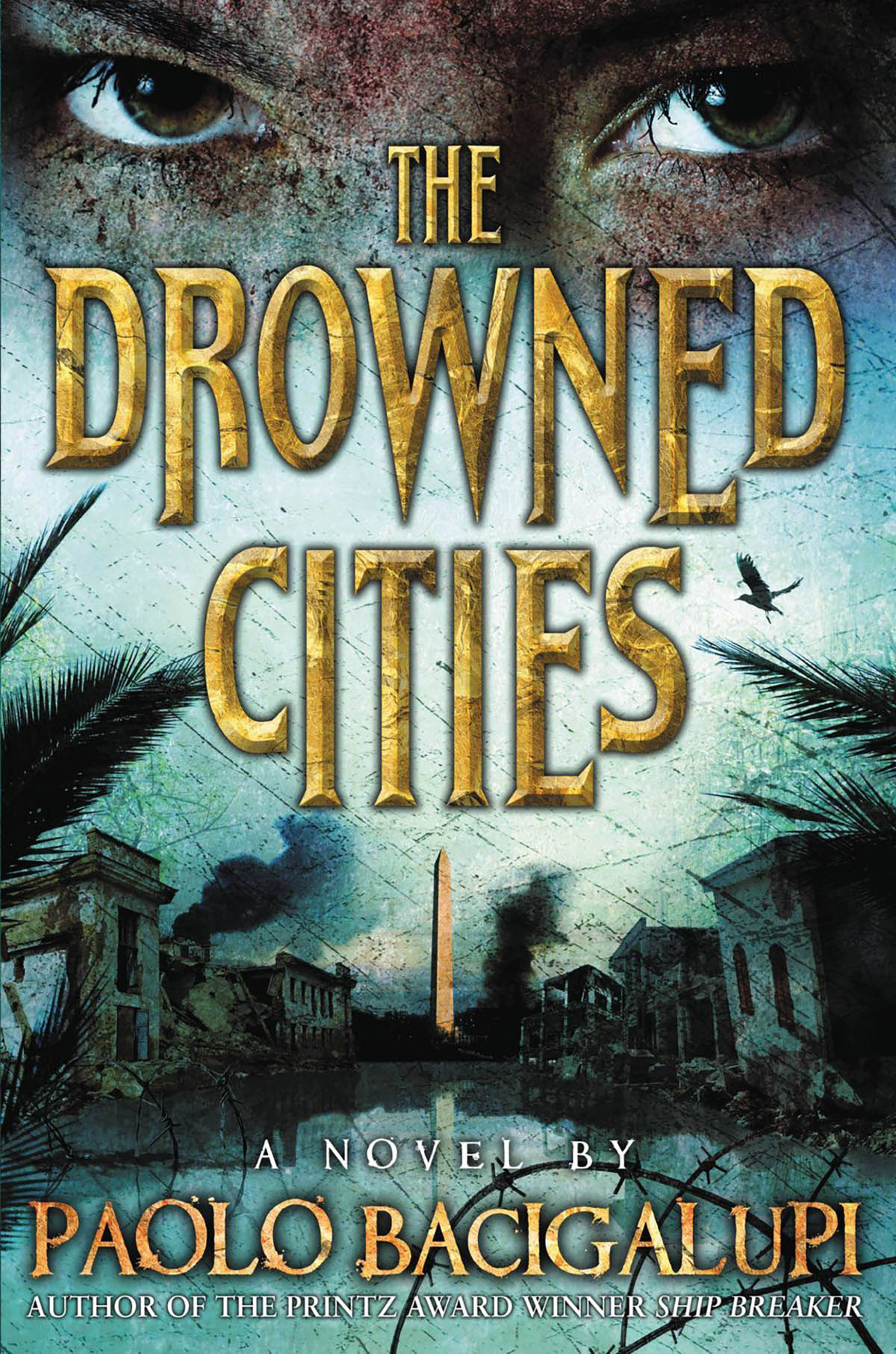 Paolo Bacigalupi’s The Drowned Cities is the best kind of young adult novel: one that can’t be immediately identified as one. It respects the maturity of its younger audiences, while catering equally as well to older readers. It’s disturbing, uncompromising, and brutal, while still showing a strong compassion for the characters mired in its war-torn future, in a North America transformed by rising sea levels. In this, it outshines Bacigalupi’s sometimes brilliant debut novel The Windup Girl, which wallows a bit much in its characters’ suffering.

The novel opens explosively with the escape of a stray “half-man,” Tool, from captivity. This “augment” soldier (his genes a tangle of human and animal DNA that makes him immensely strong, intelligent, and resilient) leaves a swathe of destruction behind him as he runs from his captor Colonel Stern’s forces (the United Patriot Front, one of the factions fighting for control of the “Drowned Cities” beyond the preserved “Orleans” cities). When Tool and the troops pursuing him brush up against the village of Banyan, two of its inhabitants, Mahlia and Mouse, get caught up in the war they’ve survived by avoiding for so long.

Bacigalupi does something fascinatingly simple here by casting the United States, the world’s current, if embattled, superpower and privileged bastion of freedom, in the role of a warzone that’s remarkably similar to any number of present-day situations around the globe, including parts of Africa and the most recent recipients of the U.S.’s attempts at exported democracy, Iraq and Afghanistan. This speculative switch-up allows Bacigalupi to explore the toll of war on such places without appearing presumptuous or patronizing, recognizing how fickle the global balance of power is on a broader historical scale ignored by the politics of the present. No country is immune to the whims of climate change or our eagerness to wage war against each other.

Despite the novel’s obvious topicality, Bacigalupi wisely keeps its politics subtextual. He lets his characters and their circumstances do the talking instead, giving refugee “war maggots,” indoctrinated “warboys,” and even bioengineered weapons clear and empathetic voices in Mahlia, Mouse, Sergeant Ocho (a UPF warboy), and Tool. That war can make killers and sociopaths of children, and does in real-life, present-day Earth, is a fact that Bacigalupi neither turns away from nor sensationalizes. He uses his characters to try and understand this process, to make some sense of boys and girls torturing and massacring civilians and entering combat without hesitation. All of them feel convincingly scarred (mentally and otherwise; Mahlia has one hand) and essentially redeemable as still-growing human beings: their arcs predictable but believable.

Tool is the only POV character who’s not a child or teenager, acting as a manifestation of everything bestial and violent in humans—a god, as it were, of war. That he ironically comes to represent salvation for the lost children of a war that’s his only home, is both affecting and strangely apt. The Drowning Cities never forgets the humanity behind this most dehumanizing and destructive of our endeavours. Tool is manmade and part human, after all—something that works on the level of both character and metaphor. In a way, we follow his coming of age as well, as he recognizes and refashions what he is.

This is a novel driven by craft as much as it is by weighty themes. Bacigalupi’s impeccable world-building is supplemented by swift and muscular prose, creating a vividly evocative portrait of a disintegrated United States (in and around ex-Washington D.C.). Bacigalupi injects his world with a hyper-real intensity that borders on hallucinatory but feels totally plausible, reminding me of Francis Ford Coppola’s singular apparition of Vietnam at war in Apocalypse Now. Both Coppola and Bacigalupi’s warzones feel off-kilter but expansively real, as if we’re just seeing part of a bigger picture constantly unfolding beyond the frame: “UPF warboys poled through the canals on skiffs or ran along bamboo boardwalks [that floated] on the waters…The slathered colors of territory and control, the echo of gunfire and artillery along the contested borders…coywolv yipping and yowling at night, calling to one another across the rooftops.” We get the sense of both nature and humanity trying to reclaim this contested territory.

The journeys Bacigalupi’s characters make through this world can’t resolve with them saving it and ending the war, because it’s too huge, too real. It’s impressive, then, that he makes each of them matter despite this. That a story dealing with child soldiers, war atrocities, and the cyclical nature of human violence can still salvage hope from the ruins without sacrificing its integrity is admirable, and worth my recommendation.