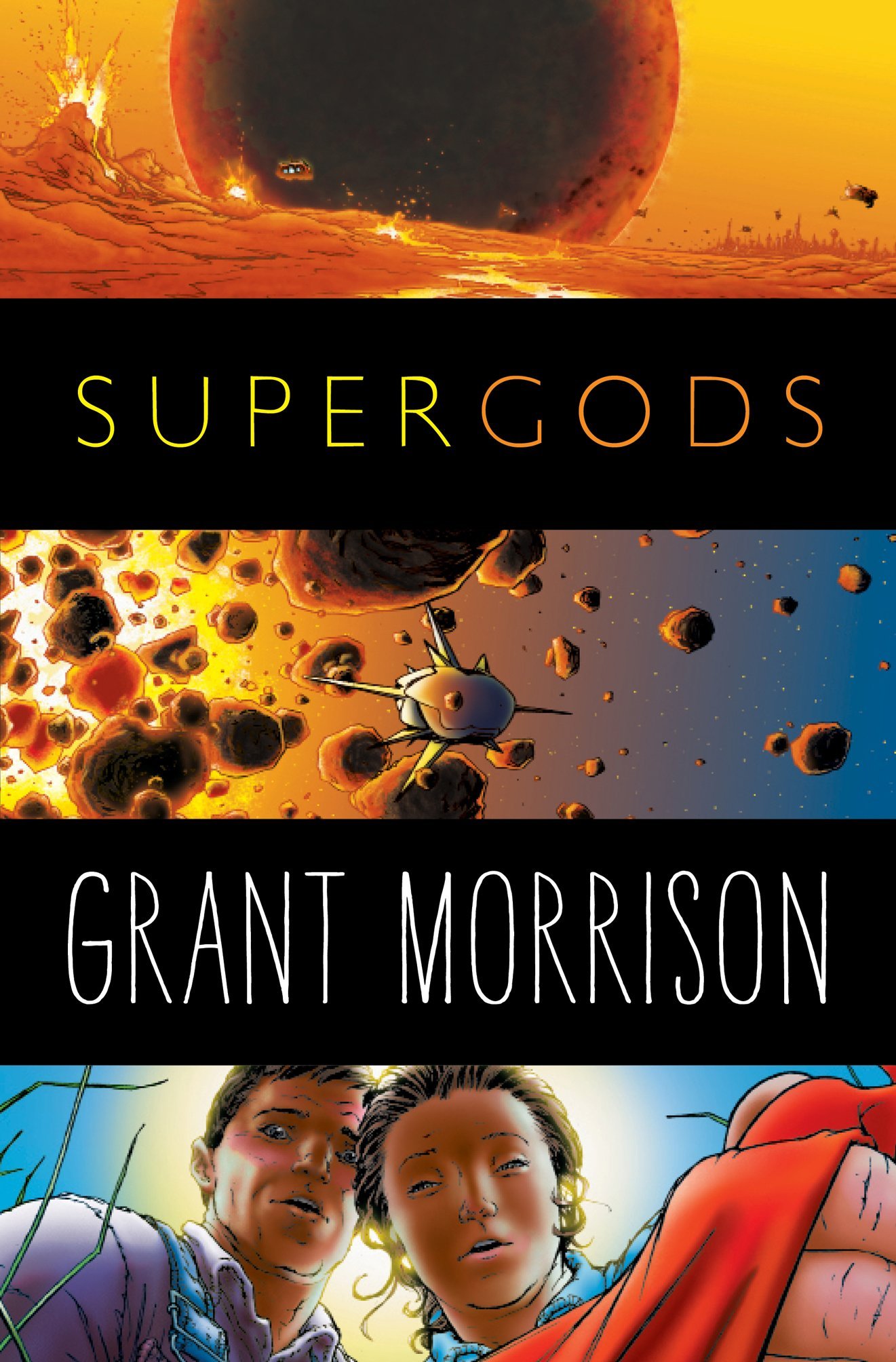 Rarely operating as agents of actual literature, the superheroes of Grant MorrisonÔÇÖs Supergods are instead portrayed as foils, projections, and countercultural symbolsÔÇöideas, the things that stand for things. Readers of MorrisonÔÇÖs own contributions to mainstream comics may perhaps have not seen this coming. Arkham Asylum and All Star Superman, two highlights in a storied career, distinguished themselves from most other attempts at superhero storytelling with their dizzying array of ideas, but the real spectacle is seeing them peopled through and through. Even when Superman follows Bizzaro to the Underverse and encounters a flawed bizzaro clone of himself (Zibarro, an almost-Superman who instead of X-ray vision has the urge to write poems), itÔÇÖs the sceneÔÇÖs immediate importance to this newest ongoing saga that carries whatever it can be read to say about the power of art. When Superman, the journalist, encourages Zibarro to continue his pursuits, it isnÔÇÖt because he likes ZibarroÔÇÖs poetry (with which heÔÇÖs clearly unimpressed), but because he knows when a comforting word can do some good. As such, his encouragement doesnÔÇÖt focus on meter or imagery, but rather on the poemsÔÇÖ utilitarian function: “Your writing has a unique quality…All these wonders only youÔÇÖve seen.” ItÔÇÖs a compliment with a reason.

Not surprisingly, ideas abound in Supergods, but Morrison seems to side with Superman more often than not. What could have been a definitive textÔÇöa criticism of the superhero genre by the author whoÔÇÖs done the most to expand our understanding of what superheroes are capable ofÔÇöturns out instead to be a scattershot historicist reading of various notable comics and comic figures of the last 75 years that somehow leads to an elaborate résumé. Superman, for his many feats, becomes a vague and rootless expression of hope, likened in the space of one paragraph to Moses, Karna, and JesusÔÇöanything that sticks.

MorrisonÔÇÖs readings are often insightful, and the best of them heighten a workÔÇÖs stature by reminding us what it, the work, can mean to other readers. There are those of us who found sexual liberation in the early Wonder Woman comics, for example, at least partly due to the creatorÔÇÖs polyamorous lifestyle. However, this approach frequently glosses over a workÔÇÖs singular merits for the sake of drawing out historical treatises from elements that perhaps wouldÔÇÖve been better off left alone, or at least read by a New Critic. Scenes are brought up not to highlight their roles in a particular storyline, but for a specious entry to a reductive declaration about a certain cultureÔÇÖs leading myths or a celebrity-filled anecdote. Exclamation points are reserved not for descriptions of thrilling sequences but for the moments when the author identifies in a story a dormant ideology. ThereÔÇÖs no true interest in RobinÔÇÖs early transformation from “a bounding paragon of vigilante boy justice” to “a weeping, petulant nervous wreck who lived in fear of losing his beloved Batman”; the sudden change bears mention only because it can be read to derive from the crazed campaigns of a comics-hating psychiatrist named Fredric Wertham, one of SupergodsÔÇÖs real-life villains. Read in this manner, the villain wins.

A writer whose sentences are rich and bright and forward-racing, Morrison can make of any subject anything he wants, and it is a sight to behold when he uses his power for good. But things start to wear down with the insistent introduction of the author as another historicist figure whose works are beholden to circumstance. What starts as a book about superheroes continues as a book about something called the Sekhmet hypothesis, which wields solar patterns as responsible for both major cultural shifts and personal evolution in MorrisonÔÇÖs own life. By the end of Supergods, once the author has abandoned any pretense of structure and the narrative has been interrupted by a tedious summary of his feelings about the Batman film franchise, itÔÇÖs clear that the project was never meant to land anywhere. ItÔÇÖs just a bunch of stuff he likes to think about.

Grant MorrisonÔÇÖs Supergods was released on July 19 by Spiegel & Grau. To purchase it, click here.

WeÔÇÖre committed to keeping our content free and accessibleÔÇömeaning no paywalls or subscription feesÔÇöso if you like what we do, consider becoming a SLANT patron, or making a PayPal donation.

Review: Erin MorgensternÔÇÖs The Night Circus and the Magic of Distraction

The Formulaic Shock and Awe of Tobe HooperÔÇÖs Midnight Movie

Review: Doug LimanÔÇÖs Locked Down Sadly Shares the Ennui of Its Characters

We use cookies on our website to give you the most relevant experience by remembering your preferences and repeat visits. By clicking ÔÇ£AcceptÔÇØ, you consent to the use of ALL the cookies.
Cookie settingsACCEPT
Manage consent