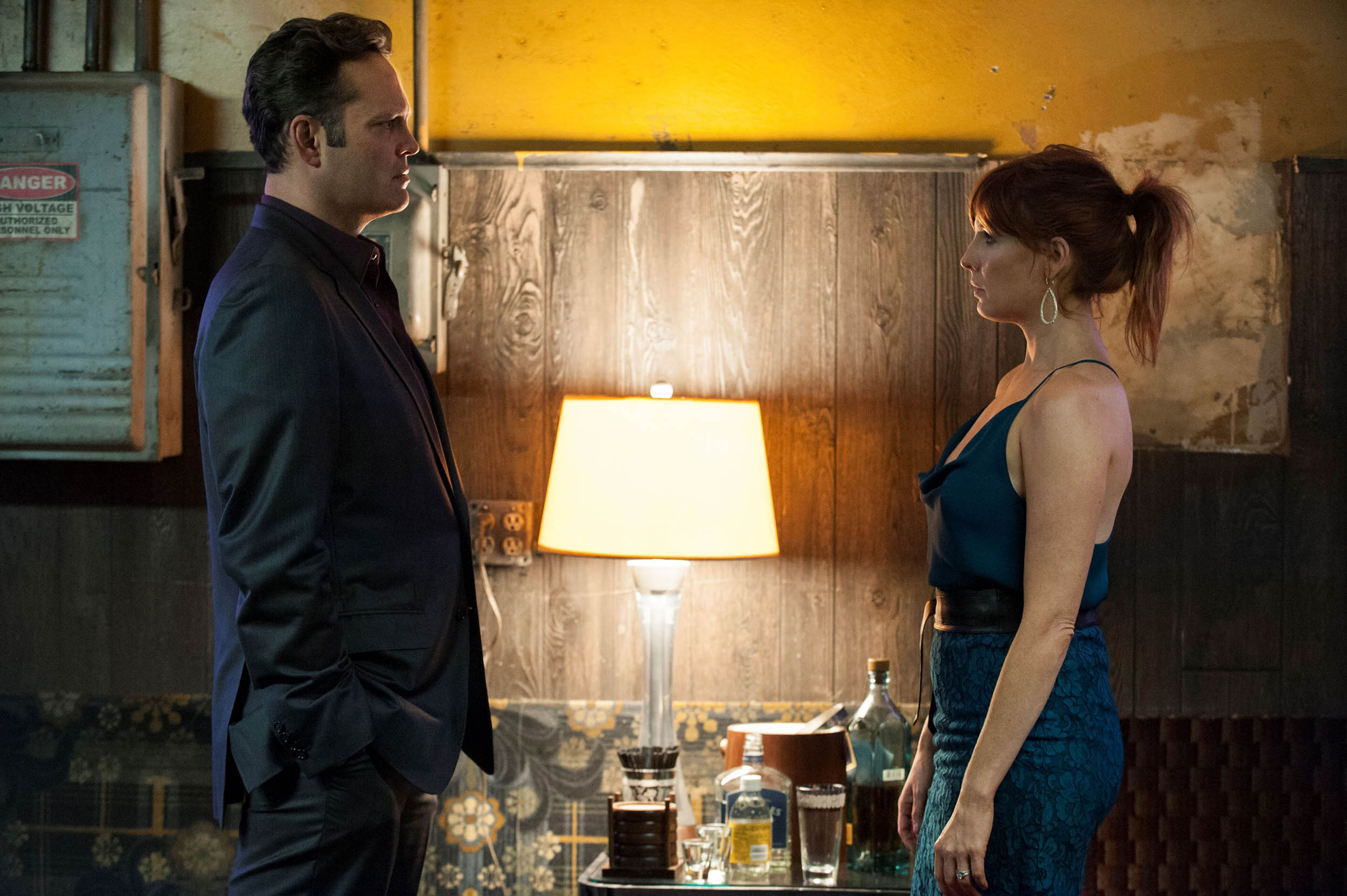 Throughout this season of True Detective, a singular point has been drilled into our heads: “We get the world we deserve.” This week, “Other Lives” suggests what we deserve is simply a construct: There’s nothing stopping Frank Semyon (Vince Vaughn) from walking away from his nightclub, poker room, and other enterprises. He may have a design, but as his wife, Jordan (Kelly Reilly), puts it, all the work he’s doing to get back to where he was before being robbed is “backslide city.” He may not like the term “gangster,” but he recognizes in a moment of clarity that it may fit; he can’t really put himself above the pimps and dealers he now works with, even if his suits and cologne are fancier. It’s no defense to say that “everything they do, they would do anyway,” because what’s to stop someone from saying the same thing about Frank? “I don’t want to see you lose who you’ve become,” says Jordan—and it’s not a matter of wealth, but of integrity. Even after all the horrors, he can choose to be a new man; he can set down that drink and forget about earning new land parcels through Catalyst by retrieving Caspere’s missing hard drive full of incriminating sex videos. Frank’s already survived moving into a smaller, shabbier place; he doesn’t have to keep dreaming of the idealized “best of all possible worlds” made popular in Candide. (The theme song hints at this too: To what extent can we really distinguish between levels of happiness? At some point, we must just “Nevermind.”)

Then again, reinvention is difficult. It’s now 66 days after what’s now being called the “Vinci massacre” that ended the last episode, and Frank’s still dwelling on how unlikely it is that Mexican meth dealers are the ones who ripped him off, even if Attorney General Geldof (C.S. Lee) has declared the case closed. “The enemy won’t reveal itself,” he tells Ray (Colin Farrell), asking him to tail an employee. “Stymies my retribution. It’s like blue balls in your heart.” Likewise, while Ray’s quit the police force to become “security” for Frank, he’s still unable to let go of this custody battle with his ex-wife, Alicia (Abigail Spencer). He continues to record messages for his son, too, though there’s something frightening about the intensity of what he’d tell an eight-year-old: “One day you may find cause to ask yourself what the limit is to some pain you’re experiencing and you’ll find out there is no limit. Pain is inexhaustible. It’s only people that get exhausted.”

Paul’s stuck in a rut as well: He’s in insurance fraud now, and off the streets thanks to the smear campaign that the actress Lacey Lindel (Ashley Hinshaw) has continued to run against him, suggesting that despite his heroics in the Vinci shoot-out, he’d throw away his badge and principles in a second to get a cheap blowjob. His pending engagement to Emily (Adria Arjona) is a bit of a fantasy too: At dinner with Emily and her mother, he starts drowning out their domestic chatter by downing a liquor-laden iced tea. This inability to connect extends far beyond his repressed preference for men though: His mother, Cynthia (Lolita Davidovich), is a train wreck, and he’s lived his own life with the weight of being blamed for ending her dancing career. The $20,000 he smuggled back from Afghanistan might’ve been seed money to truly start his life anew, and the first glimpse of real anger—and not just the panicked emotion of worrying that he’ll be outed by a former lover—comes after he realizes his mother’s already unapologetically spent it.

And finally, there’s Ani (Rachel McAdams), dutifully plugging away at her sexual harassment workshops, even though she’s so out of place there that the other male officers in the “safe circle” of expression can’t help but accidentally harass her over their disbelief that she’s there. After all, they suggest, how could anybody ever feel harassed by a woman as beautiful as her? She proves this point rather handily as she derails the conversation to talk about how much she likes big dicks—wanting to have trouble “handcuffing the thing.” The men don’t want her to talk out her problems; they want to get off on her presence, and it’s easy to see how she’s felt like a fetishized object throughout her entire life. Now, literally sitting around in the cage where the keep all the evidence, she’s desperate for a second chance, but has no idea how to actually take it. It’s only with the utmost of practice that she manages to convince her former partner Elvis Ilinca (Michael Irby) to leak her some information on a cold case that she believes might have a tie to the Caspere murder. The irony here is that the lead that gets her reinvestigating the case comes from a woman who happens to trust her solely because she isn’t a man.

Ultimately, all three cops get a second crack at the Caspere case after Katherine Davis (Michael Hyatt) secretly reopens it. Again, it’s not because she cares that the Mexicans might have been wrongfully targeted; it’s because she believes this will lead her to proof that Geldof colluded in the cover-up so as to get his hands on the war chest that’s currently funding his run for governor. Paul, Ani, and Ray are perfectly disgraced enough that they won’t, as she puts it, “ping” on the radar of the influential (and corrupt) officials who already closed the case once before. Their reinvention, so to speak, is just a matter of being in the right place at the right time. This is especially true in Ray’s case, when Katherine explains that she now trusts him because it’s come to light that he couldn’t have murdered his ex-wife’s rapist—on account of the fact that they just caught the rapist. The problem for Ray, of course, is that he now knows that Frank set him up all those long years ago: He’s still got a murder on his conscience, only now it’s the murder of an innocent man.

Given all of this, Ray might not agree with Ani’s assessment that it’s never too late to start anew, or perhaps he’s just hearing it from the wrong person (since she hasn’t really changed). But he’s certainly ready enough to get the results Katherine wants—by any means necessary. Having already followed Frank’s employee to a meeting between the mayor’s son, Tony (Vinicius Machado), and Doctor Pitlor (Rick Springfield), who was covering up for Caspere back in the first episode, he now confronts the good doctor and former plastic surgeon with a blackjack in hand. “Your compensatory projection of menace is a guarantor of its lack and it says something about the depths of your misperceptions,” says Pitlor, but he’s the one who misunderstands. Ray’s been a thug for years now, and if he’s willing to do bad things for the wrong reason (like beating up the journalist who threatened to expose the corruption in Vinci), he’s even happier to do them for the right reason.

Ani, on the other hand, is a bit more desperate. Her sister, Athena (Leven Rambin), is on the verge of getting out of the porn business, having saved enough to attend the prestigious art academy she’s just been accepted to. Now, Ani asks her to try and finagle an invitation to one of those exclusive sex parties, dangling her sister in front of some very dangerous men when only four episodes ago, she was trying to bust her for some very light (and legal) webcam work. The real difference between the two sisters, then, is that Athena has been using the toxic things in her life toward a positive end, whereas Ani—a gambling addict who has also dropped the e-cigs for real ones and liquor—has been using them to escape all the repressed rage and bile from her childhood, running (like Paul) without a goal in sight.

Ironically, even though “Other Lives” hints at the different lives its characters could experience at any given moment, it chooses to enmesh them even deeper in the ones they’ve unwittingly chosen. The episode ends with Frank in a rare moment of happiness, having reconciled with his wife and making positive moves toward a future in which he doesn’t have to act like a gangster, only to open the door on Ray, the man he set up all those years ago. The scene’s also intercut with a discovery from Ani and Paul: a cabin filled in arterial spray and the bloody puddles of a man tortured to death in a duct tape-covered chair. Frank is simultaneously free to do whatever he wants, but at the same time, he’s as caught up in a bloody past as that missing victim.