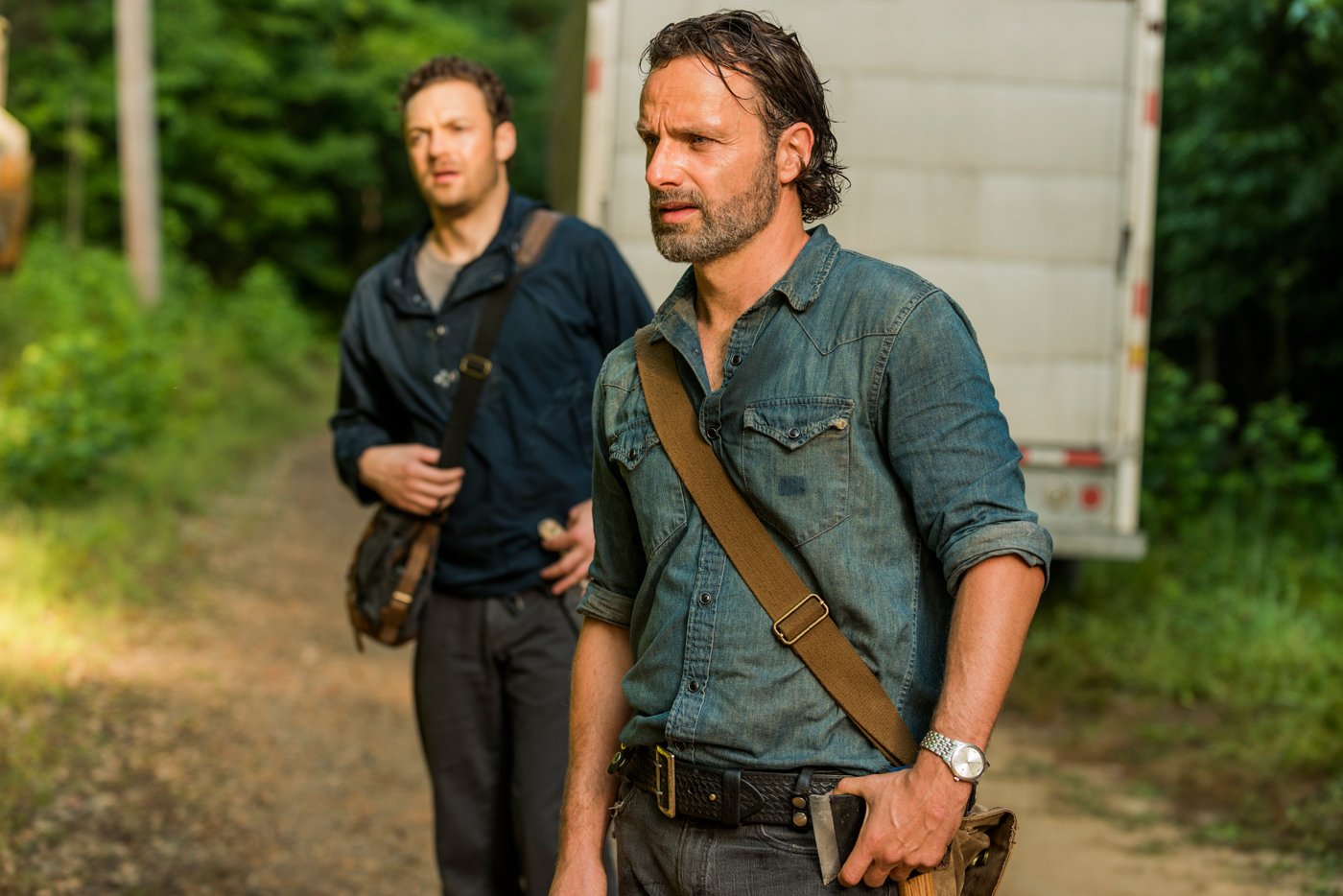 This season’s start was as bleak as any in The Walking Dead’s history, but the show’s midseason finale closed on a major note of hope. Tested by the fire of Negan’s (Jeffrey Dean Morgan) sadistic dictatorship, Rick (Andrew Lincoln) and most of his core group wound up stronger than ever, determined to stand up to their tormentor—and to do it together. “Hearts Still Beating” ends on a shadowy figure who’s spying on our survivors, the close-up of his (or her?) boots establishing that it’s the same person who shadowed Aaron (Ross Marquand) and Rick on their supply run earlier that day.

Right before that bit of foreshadowing, though, Rick’s group had one of those satisfying reunions they get every few seasons, complete with teary hugs, meaningful stares, and a surprise appearance by Daryl (Norman Reedus), who escaped from his solitary confinement in the Sanctuary. And right before that, Rick and Michonne (Danai Gurira) came together tighter than ever before, after having gone solo soul-searching in different directions in reaction to the carnage that started this season. Rick even got reunited with his Colt Python, which Daryl reclaimed after killing Fat Joey (Joshua Hoover).

The most upsetting thing about the episode’s inevitable deaths was that they weren’t all that upsetting. We’d seen enough of Fat Joey to feel some empathy for him, but when Daryl took that pipe to his head, you might have found yourself worrying more about Daryl. Maybe he was smart not to believe that Joey wouldn’t send people after him as soon as he escaped, having learned his lesson from the aftermath of his decision to spare Dwight and his family. But if Joey was sincere, his death was coldblooded murder, and when Daryl leans over his corpse to hiss, “It ain’t about just getting by here. It’s about getting it all,” he sounds more like a bad guy than a badass.

Olivia’s (Ann Mahoney) death is played as unambiguous tragedy, but it also registers as something of a relief. She’s standing next to Carl (Chandler Riggs) when Arat (Elizabeth Ludlow) wheels around to shoot someone at random, on Negan’s command, so it feels as if the bullet could have just as easily brought down Rick’s boy, which would have registered as a far greater loss.

As for Spencer (Austin Nichols), his death was hardly a surprise, after several episodes in which the target on his back kept getting bigger—and frankly, will he really be missed? It looked as if Rosita (Christian Serratos) was ready to give him a second chance earlier in the episode, but viewers certainly weren’t on the same page, since all Spencer seemed to be good for was trash-talking Rick and playing Neville Chamberlain with the Saviors. There’s something creepy about feeling so casual about death, even that of a minor or unlikeable character, so maybe it was good for our souls to check back in with Carol (Melissa McBride) and Morgan (Lennie James), still holding true to their pacifist principles at the Kingdom—though it’s doubtful that they’ll be able to keep making like Switzerland once war is declared on the Saviors.

Maggie (Lauren Cohan) and Michonne keep growing into their new roles as leaders. Maggie matter-of-factly receives tribute in the form of food from Hilltop residents who’re grateful to her and Sasha (Sonequa Martin-Green) for driving off the walkers, and when Gregory (Xander Berkeley) tries to reassert his shaky authority over Maggie, the contemptuous ease with which she brushes him back makes it clear that his day is over—something he may already comprehend given the way he tosses her an apple that’s her due.

“Are you already president?” Enid (Katelyn Nacon) tells Maggie. (We wish, Enid, we wish.) Even Rick apologizes to Maggie, telling her that he was wrong and she was right about the Saviors from the beginning. Michonne talks more than she has in several seasons, and the vulnerability with which she opens up to Rick is also a sign of strength. She’s ready to claim her place beside him as a warrior queen, pleading with him to join her and the rest of the group and telling him they can only win if they all fight together. He’s ready for her, matching her tear for tear and agreeing with what she says.

Negan makes Carl and Olivia set the dinner table for him and them (and Lucille) in a sick parody of domesticity, and Rick endures more pain and humiliation after he gets home, watching helplessly as two Saviors savagely beat Aaron and then holding his tongue as Negan ends their encounter with his usual round of threatening taunts. But other Alexandrians can’t stop themselves from openly defying Negan, despite the promise of the direst of consequences. This time, Rosita aims her lone bullet at Negan and hits Lucille instead, enraging Negan and causing him to order someone’s death. He also figures out that the bullet was homemade and takes Eugene (Josh McDermitt) back to the Sanctuary, presumably to replenish their ammo supply.

The parameters of the world outside Alexandria continue to expand as Rick and Aaron score a motherlode of supplies from the place they discovered in the last episode, in which someone named Leslie William Stanton left behind threatening signs and a lakeful of walkers to protect his stash. The drawing Aaron finds there, of a raised middle finger and the words “Congrats for winning. But you still lose!” proved prophetic when the Saviors used it as their excuse to beat Aaron on his return. I’d like to think the bad juju conjured up by that sign has run its course, but no doubt it hasn’t.

Michonne gets unsettling news as well, but her fact-finding mission also turns up something hopeful: The Savior, Isabelle (Aerli Austen), she carjacked tells her how she can evade Negan’s retribution. Yes, there are more Saviors than the Alexandrians knew about, but between people like Isabelle and whoever slipped that note into Daryl’s cell, telling him to escape, some appear ready to switch sides should Rick’s group decide to declare war against Negan.