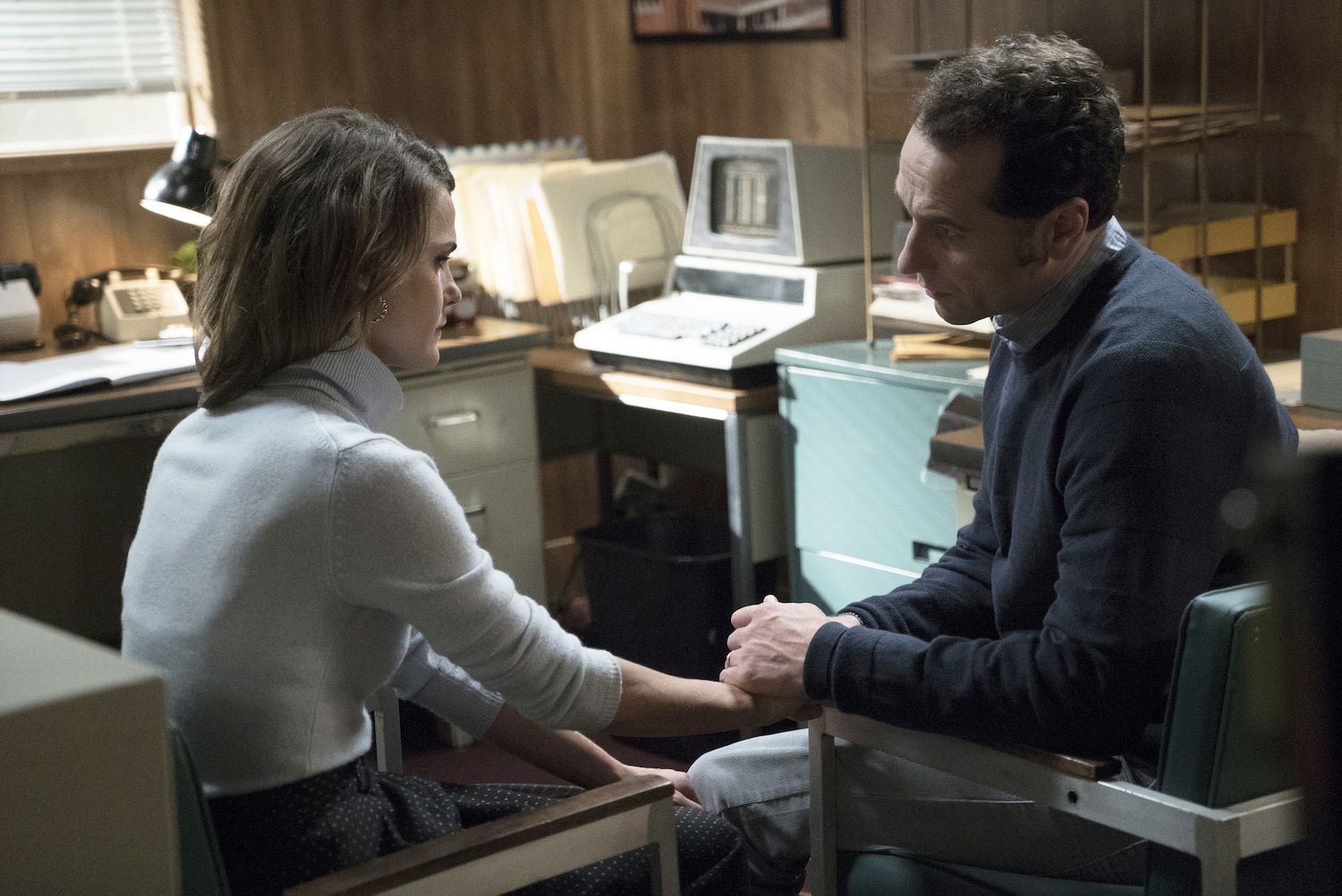 Addressing the Soviet Union’s ongoing misadventure in Afghanistan midway through the season-three premiere of The Americans, Arkady Ivanovich (Lev Gorn), the KGB’s rezident in Washington, urges his comrades to consider the United States yet another front in the conflict. “They’re fighting this war from here,” he says of the Americans, “and so should we.” Seeping into every nook and cranny of both global politics and private life, the Cold War’s red-hot proxy fights have long defined FX’s superb spy game, but as with Arkady’s intimation of a growing battle, “EST Men” stakes out new terrain. Establishing the contours of a narrative that threatens to dissolve the familial bonds that Philip and Elizabeth Jennings (Matthew Rhys and Keri Russell) have worked so hard to forge, tonight’s episode of The Americans brings the series closer to home than ever before.

The point of contention is their daughter, Paige (Holly Taylor), whom they’ve been instructed to recruit to the KGB as a “second-generation illegal.” Rather than focus on the particulars of turning an American teen into a communist agent, however, “EST Men” frames the debate between Philip and Elizabeth in universal terms: How do you raise a child? Though the subject of politics shadows their disagreement throughout (Elizabeth, the committed ideologue, is determined to instill in Paige the gospel of Marx and Lenin, while Philip, perhaps softened by capitalism, employs the language of personal choice), the real issue is more elemental. Elizabeth, who in an early flashback throws the frightened young Paige into the pool, sees parenting as a process by which we harden our children against the cruel world they’ll inevitably face; Philip, by contrast, wants to protect Paige from that world as long as possible. In their fucked-up, we’ve-been-lying-to-you-your-whole-life sort of way, both have their daughter’s best interests at heart, but each brings a distinct set of values and experiences to the table.

Differences in parenting style can disrupt even the most stable marriage, so it’s not surprising that the tension between Elizabeth and Philip eventually boils over. Whether merely playing the supportive mother or sincerely invested in Paige’s nascent faith-based activism, Elizabeth, an ardent atheist, accompanies Paige to church to sing hymns and fold flyers protesting nuclear proliferation. “Ideologically, she’s open to the right ideas,” she tells Gabriel (Frank Langella), the couple’s new KGB handler. “We’re getting her ready to find out who we really are, who she really is.” Rhys, in a perfectly modulated moment, allows an expression of distrust to flash across Philip’s face, but he keeps silent until they’re back in the car. She’s been grooming Paige without consulting him, he accuses. She was just saying what Gabriel needed to hear, she counters. At one level, the sequence is remarkably familiar: It’s the kind of fight you might overhear after playing your parents against each other to score a later curfew or permission to attend a party. And yet it also bristles with layers of meaning specific to Soviet spies posing as American travel agents; after years of hiding in plain sight, who Philip and Elizabeth really are appears to be an open question.

Indeed, while Philip increasingly enjoys the accouterments of the his family’s comfortable lifestyle, tooling around in a white sports car with F.B.I. counterintelligence agent Stan Beeman (Noah Emmerich), “EST Men” finds Elizabeth suddenly reminded of the life she left behind. Gabriel passes her an audiotape recorded by her dying mother, and though we only hear the un-subtitled Russian, the tempest in Russell’s face tells us all we need to know. As her smile fades, Russell’s remarkable performance not only suggests the depths of emotion roiling under Elizabeth’s placid surface, but also begins to explain why she fears that Paige will be lost to the West. The prospect of her daughter becoming a willing participant in the American way amounts to nothing less than a betrayal of her heritage.

What’s most impressive about The Americans is that it manages to cover such intimate terrain within the structure of a thriller, and for each moment of quiet reflection there’s a mission to be accomplished, an informant to fool, a friend to string along. Certain of these interludes, such as Elizabeth’s brutal street fight with a pair of F.B.I. agents, function as pure action-adventure set pieces. (The lo-fi intensity of the fisticuffs here is a refreshing departure from blockbuster spectacle, with the sight of Elizabeth spitting blood into the sink an especially effective detail.) Others, like Philip’s Kama Sutra-inspired contortions with Martha (Alison Wright), or his visit to the ludicrous EST seminar with Stan, play primarily as comedy, though there’s an underlying sadness too: The Americans may ask us to empathize with the Philip and Elizabeth, but it’s impossible not to feel bad for the vulnerable people they dupe.

In this sense, “EST Men” succeeds in introducing the potential consequences of the next phase in the pair’s personal and professional lives by returning to the structure that has buoyed the series in the past. Without fail, The Americans uses its disguises, chase sequences, and dead drops to inform what’s happening on the home front, with the procedural aspect shoring up the family drama and vice versa. Philip, sleeping with sources and tossing them aside, turns out to be even more ruthless than Elizabeth, and his willingness to let an innocent woman die in order to pry intelligence from a Pakistani official is chilling. In fact, not unlike Stan, so desperate to save his crumbling marriage that he commits to a self-help program he knows is “insane,” Philip and Elizabeth convince themselves that each moral compromise they make, whether related to their daughter or the corpse on the hotel room bed, is in the service of a higher purpose. Every proxy fight in The Americans is part of the larger war.