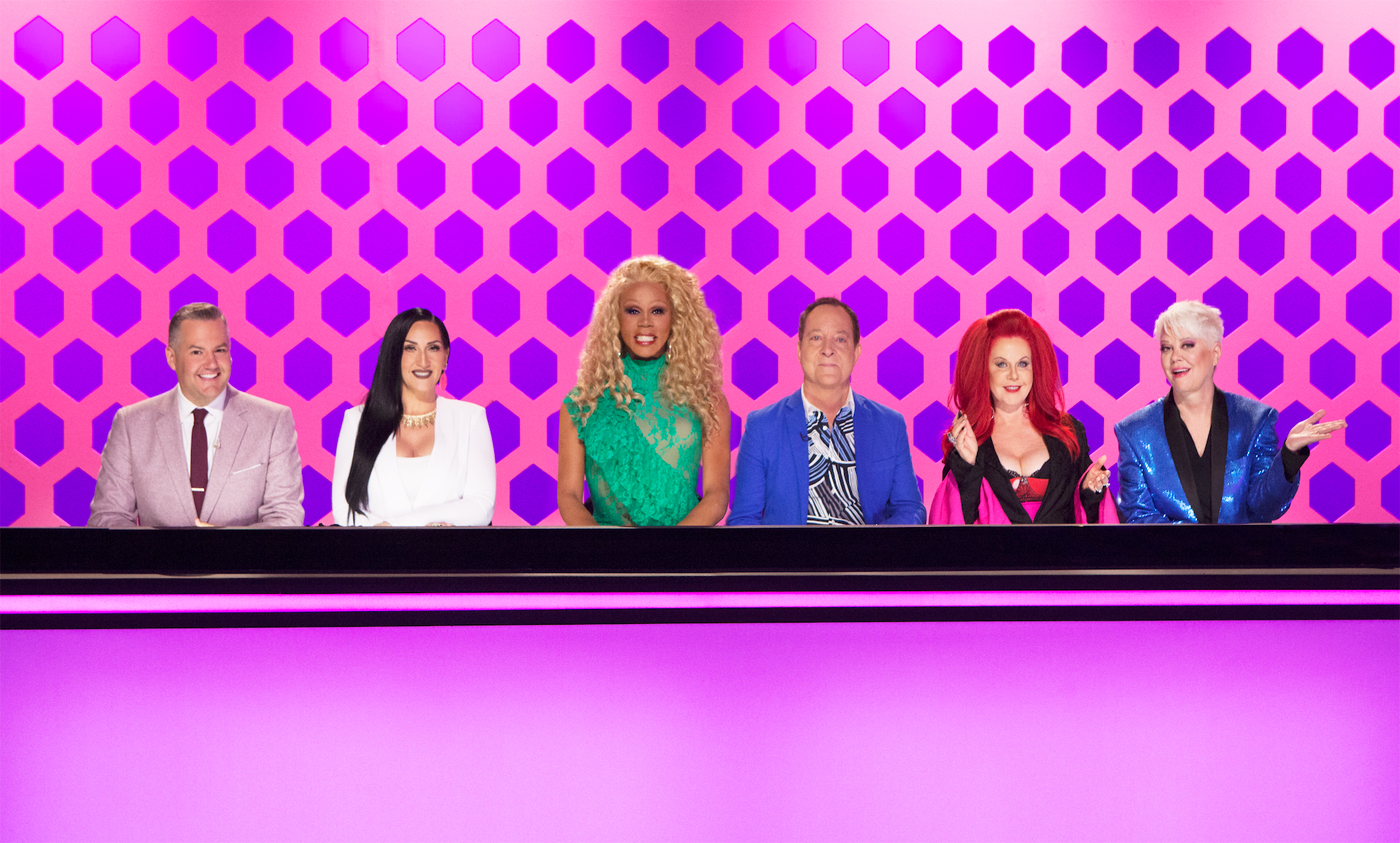 Occasionally on RuPaul’s Drag Race, frontrunners emerge right out of the gate. Raja set the bar for season three when she aced both the photo and the runway challenge without so much as breaking a nail, and Sharon Needles cut down among the fiercest of competitor slates the series has ever seen with a “post-apopolopic” look that instantly rewrote season four in her favor. Other times, though, queens emerge into their essence only with the passage of time. Just ask season five’s Alyssa Edwards, who didn’t really peak until her All-Stars run, or season seven’s Katya and Trixie Mattel, who are arguably still reaching a creative crescendo with their brilliant “UNHhhh” segments on the World of Wonder YouTube channel.

Two episodes in, and virtually none of this season’s queens have been given much of a shot at either scenario. Ru stunned the children last week by sending no one home in front of guest judge Lady Gaga, and this week she’s reintroducing a previous queen back into the competition, Shangela-style. And all the new queens are Halle-losing screen time by the edit. As many predicted on Reddit, the returning vet of the competition is none other than season eight’s Miss Congeniality and future-Cocoa Puffs spokesqueen Cynthia Lee Fontaine, who reminds everyone that she had but one single, intensely irritating catchphrase that I can now only parse as an admission that her buns belong in the booby hatch. (No arguments from this corner.)

The workroom is now teeming with more drag queens than E.G. Marshall’s high-rise condo in Creepshow was with cockroaches, and so it makes perfect sense for Ru to jam in a cameo appearance by a nonplussed Lisa Kudrow to introduce this week’s main challenge. Yet again there’s no mini challenge, and the absence of their typical frivolity and lack of decorum is noted. Instead, once Lisa’s safely made her escape, it’s straight to the PTSD-inducing gym-class team selection as last week’s winner, Nina Bo’nina Brown, and “Cucu” Lee Fontaine select teams for their cheerleading squads.

How either of these two queens make their selections this early on is anyone’s guess…except for when it comes to Jaymes Mansfield, the Eeyore of this year’s competition, who Nina makes it a point to qualify she’s picking only because she has a weakness for “the underdog.” The outgoing Miss Congeniality pours salt in the wound by sniping, “She was just doing community service.” Whether the exchange represents a concerted effort or not, Jaymes picks up right where she left off: dejected and defeated, like LaGanja on Quaaludes.

But at least Jaymes isn’t the last picked. That honor, somehow, goes to irrepressibly cute Valentina, who Eureka surmises is shafted because she’s only been doing drag for less than a year yet somehow has the nerve (“and it do take nerve”) to assert herself a star. That observation, coupled with Jaymes’s waning confidence in herself and Kimora Blac’s unshaken faith that her ass could swallow Cynthia Lee’s cucu whole, sets the tone for an episode fixated on the distance between the queens’ self-assurance and their bona fides. The challenge pits each cheer team against one another for a trash-talking Bring It On-derivative production number. The good news is they won’t have to wrap their pumped lips around pseudo-Shake-a-speare couplets. The bad news is they’re all gonna need to pad with ice packs later, because, yes gawd, their routine will include tumbling.

And poor Jaymes has enough trouble not tripping over her own introduction. Each queen gets to introduce herself with an adjective, like they’re the Seven Tucking Dwarfs, and Jaymes’s team tries to convince her that being “snoozy” will let her finally unleash her camp comedy side. She senses a trap and latches onto “floozy,” which her team allows, but the confusion gets in Jaymes’s head and she can’t land on her beat, nor can she even remember which of the two -oozy’s she is; during one run through, she claims she’s “Jewsey.” Realizing she’s not serving “floozy,” Jaymes asks to revert to “snoozy” just in time to switch over to the padded gym for tumbling practice.

There, two-time cheer champion Dom Palange backflips, twists, and basically just gives everyone a little taste of what happens in the bedroom between him and his husband, Travis Wall, while four golden boys in black leotards present themselves like Ryan Steele. Only the thought of witnessing Eureka being launched into the air keeps the mind from wandering off to a Sean Cody scenario. Spoiler Alert: Eureka isn’t among the queens chosen to launch.

Kimora is out of her Vegas comfort zone, not having it, and letting it out with both Gia Gunn barrels blazing. “Who even does cartwheels anymore? What is this, the ‘80s?” “What is a bloomer? It sounds disgusting.” “I can’t believe I’m still hard-stoning this. This is hard labor. This is why I pay people to do this…Stoning is for ugly girls.” Kimora’s hips may be a mile wide, but she’s clearly used to staying in her own lane. Which, against Charlie Hides and his AARP membership being hoisted to the ceiling, is extremely NAGL. Even the House of O’Hara is rolling its eyes by the time RuPaul, in her Mama Ru finery, walks down the main stage to introduce guest judges the B-52s.

Before Kate Pierson, Fred Schneider, and Cindy Wilson can behold the glitter on the runway, Kimora and the rest of the queens who actually want to be there have to show some team spirit! It would’ve been a heartening twist for Jaymes to suddenly clap to the beat, but even though the editors chivalrously try to cut around it, her choreography is U-G-L-Y and she ain’t got no alibi. Luckily, the format doesn’t really allow many of the other queens to stand out in a good way, though Valentina’s commitment to the character shines through. Things heat up on the tumbling mats, as Eureka pulls off a monumental split and somehow trots off despite popping a knee. Valentina muscles through a single-handed cartwheel, and even though Jaymes actually pulls off a convincing double somersault, soon enough Shea Coulee is pulling all focus with some flawless backward flips.

If it weren’t already obvious, the runway challenge (category is: White Party realness) confirms Valentina as this week’s winner, and it isn’t even close. Her virginal bridal gown is in tribute to her mother (aww!), and she looks as radiant as she would if she were walking down the aisle for real. Charlie’s look is very Lion in Winter, and it’s another winner. Farrah Moan is on a quest to see just how much body-ody-ody she can show while still fading into the background, and Trinity’s retro futurist jumpsuit hits the B-52s’ sweet spot.

Jaymes wears exactly the sort of unimaginative bombshell getup you’d expect her to (she’s clearly now listening to Karina Longworth’s You Must Remember This podcast, currently working through a series of dead blondes). And, forget Nomi Malone, even Penny wouldn’t be caught dead in the torn body-sock Kimora flounces out in. Kimora absorbs Michele Visage’s criticism with the poker face Lady Gaga left behind from the week before, perhaps not imagining that she could ever land in the bottom two. Meanwhile, judge Ross Mathews notes that Jaymes is committed to “this airhead shtick” but as of yet lacks the confidence to sell the act 100 percent. “I feel it’s at 20 percent,” Ross says. A confident, quick queen who’s acting the part of a bimbo would’ve had the wherewithal to come back from that criticism with, “Sorry, I’m bad at math. Is 20 percent worse?” But it very well appears that Jaymes chose his dizzy drag persona with the path of least resistance in mind.

And so it is that this Drag Race season’s first Lip Sync For Your Life is a showdown between the queen who very well may have talents but is letting herself be defeated by her own self-doubt, and the queen whose talents may only be skin deep but who has the nerve to believe her own inflated self-regard. Though you can see a few bubbly-swilling, gawky-thrusting glimpses of how Jaymes was actually better positioned to knock “Love Shack” out of the park, she never manages to convey intentionality behind her offbeat, vaguely confused delivery. Kimora, sticking with what she knows, serves consistent face, and given how RuPaul uses her podcast as a forum to remind squirrels all over the world the importance of unleashing your inner diva, her choice this week is, like Jaymes, a no-brainer.