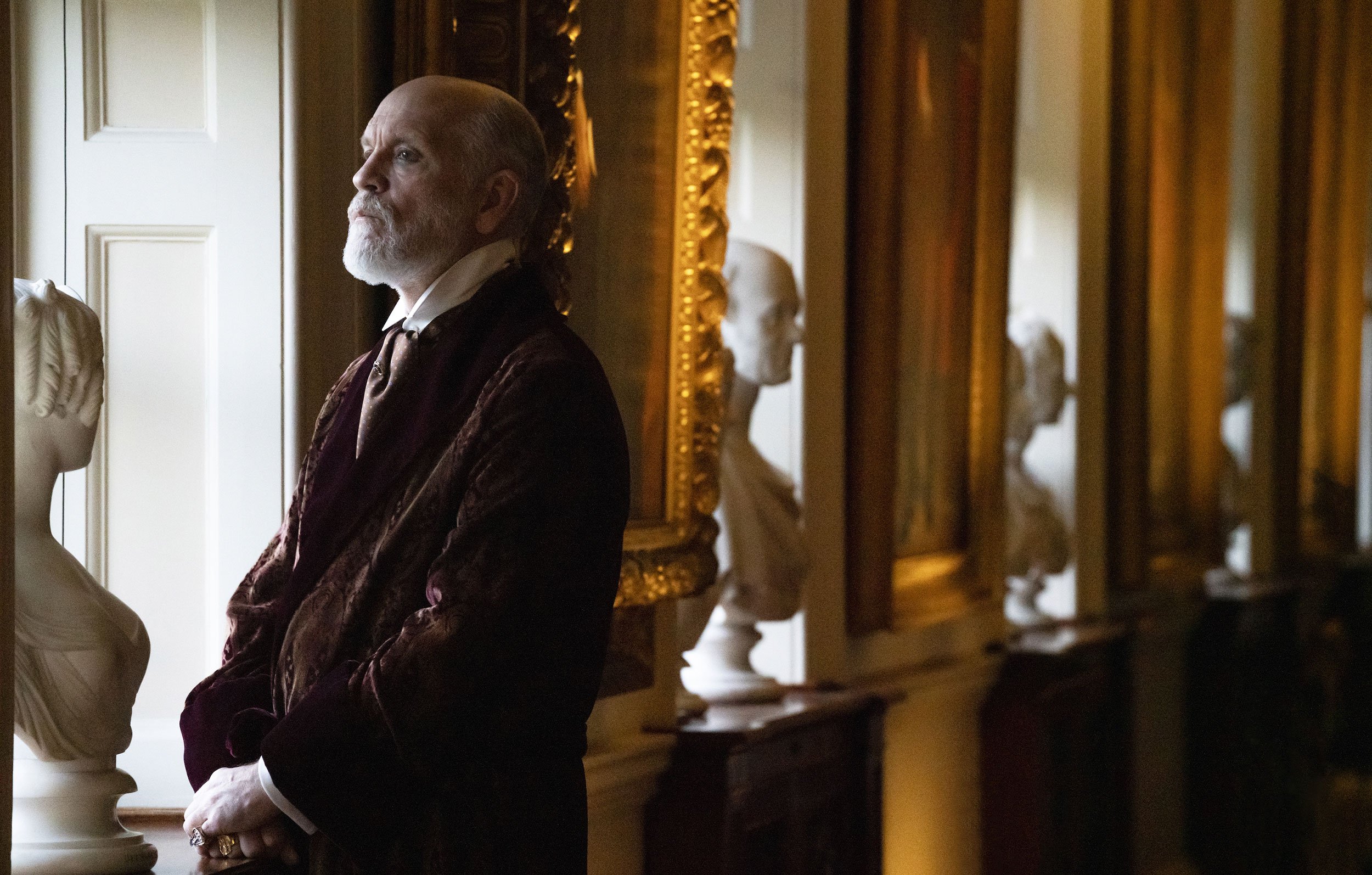 Having collapsed at the end of The Young Pope, Lenny Belardo (Jude Law), also known as Pope Pius XIII, is in a coma at the start of The New Pope. He’s being looked over by a nun and illuminated by a bright, neon cross straight out of David Fincher’s Seven. His involuntary sighs and twitches are fraught with meaning; at one point, a usually pragmatic man (Mark Ivanir) claims that the pope killed someone with the quiver of a finger. Idolatrous followers stand vigil in the square outside his chambers, donning sweatshirts with his face on them. The pope’s wild charisma survives the apparent death of his consciousness.

Seeing no improvement in Belardo’s condition after nine months, the cardinals decide to elect a successor, whose fleeting, radical papacy briefly opens the Vatican to refugees and risks bankrupting it. The cardinals then opt for a more moderate replacement: Sir John Brannox (John Malkovich), an oft-depressed priest who wears eyeliner and lives on his family’s sprawling English estate. With Belardo on a respirator and Brannox headed to Rome, the series imagines a world with two popes—setting up a compelling conflict over legitimacy, poised to erupt if Belardo wakes up, of the kind unseen since the Western Schism ended 600 years ago.

Brannox is less charismatic than seductive. Fond of poetry, he speaks haltingly, as if waiting for words to come to and flow through him. He’s haunted by an evident pain, communicated in flashbacks of the twin brother he lost long ago and across lonely nights spent struggling to fall asleep. Malkovich, his eyes at times hollow, at others alight with a furtive spark, imbues the character with profound vulnerability and depth.

Beyond the issue of what to do with the pope on life support, the Holy See faces numerous challenges: ongoing sexual abuse scandals; the so-called “caliph,” who issues anti-Christian threats in videotaped messages; the cataclysmic prospect that Italy will begin retroactively taxing the Vatican; nuns who go on strike to demand equal rights; and more. If anyone is capable of restoring order, it’s Angelo Voiello (Silvio Orlando), the Vatican’s alternatingly ruthless, patronizing, and surprisingly tender—and regularly hilarious—cardinal secretary of state, who’s a singular presence throughout the series.

Most of the cardinals wrestle with personal demons and try to lead virtuous lives, like Voiello—whose harshness is a function of his office—and the supremely empathetic Gutierrez (Javier Cámara). Others, though, are unapologetically vile: They have sex with minors and snort cocaine and blackmail and blaspheme. The irreverence with which the series portrays the church results in not only bleak cynicism, but also unexpected images of feverish, dreamy splendidness. The first episode’s opening credits depict relatively scantily clad nuns dancing to a song by electronic duo Sofi Tukker in a dark room while a cross-turned-strobe light pulses, a slow zoom-in building momentum that culminates in an explosive bass drop.

The nuns play a not-insignificant role in The New Pope, but its treatment of them and other female characters is shallow at best. The series often dehumanizes women in scenes that lean on needless nudity—of which there’s no shortage here—or with imagery that prioritizes symbolism over personality. At times, The New Pope manages to incorporate both nakedness and perfunctory iconography in the same shot: In one instance, a bare woman is juxtaposed with a statue of the Madonna. Even key figures who carry over from The Young Pope suffer from halfhearted characterization, including savvy marketer Sofia (Cécile de France) and Esther (Ludivine Sagnier), the woman whose pregnancy may have been the result of a miracle performed by Belardo. (The New Pope also leaves the caliph’s antagonism underdeveloped, causing terrorism and nudity to resemble one another: stimuli deployed to elicit cheap reactions.)

Despite these failings, and despite the sordid, festering material that the series explores, what ultimately emerges from The New Pope is sheer beauty. It’s an understated grace, one that director Paolo Sorrentino and cinematographer Luca Bigazzi effect with an eye to intimacy. In a late scene, the camera cuts between tight profiles of Brannox, dressed in white, and Belardo, dressed in black, as they face each other in front of a painting whose background is a black-and-white swirl. The dichromatic canvas envelops Brannox and Belardo, seemingly transporting the pair to an abyss, or the cosmos, or some other otherworldly space. Perhaps it’s easier to find God there, away from the Earth, the Vatican, and the depravity plaguing them. The sequence is an obliterating burst of pathos that pierces and lingers.