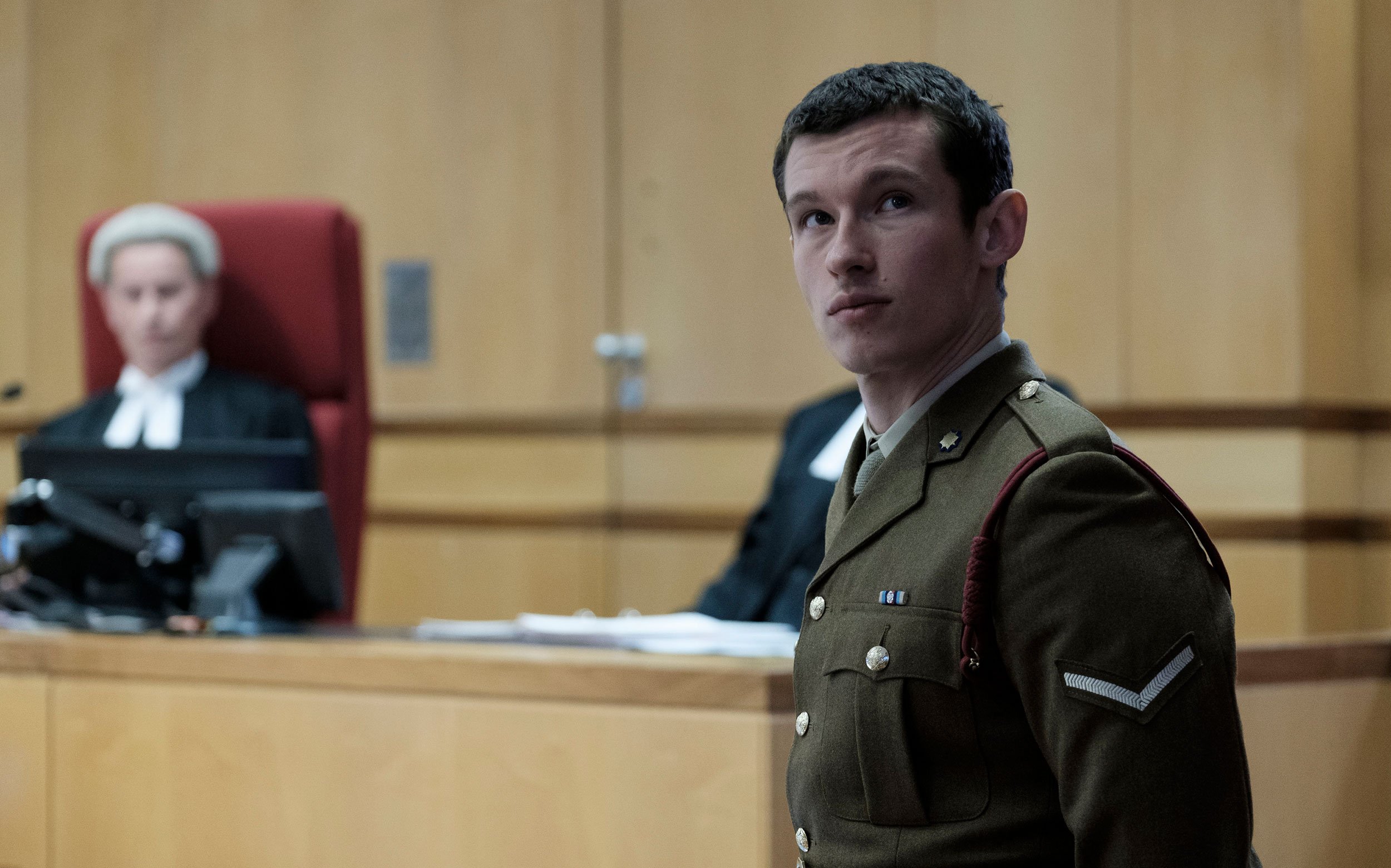 Ben Chanan’s The Capture wears its topicality on its sleeve, principally concerning the CCTV security cameras that monitor London’s streets and which number in the hundreds of thousands, averaging out to one camera per dozen or so people. The casualness of the cameras’ presence throughout the Peacock series is unnerving, suggesting how easily privacy can be annihilated with little in the way of pushback from the populace.

Chanan’s concerns, though, aren’t existential ones, as he’s fashioned a murder mystery that laboriously connects modern surveillance to social media, war crimes committed in the Middle East, rising notions of fake news, and whistleblowers like Edward Snowden—all of which are referenced explicitly in the show’s dialogue. Weirdly, the sociopolitical Easter eggs often feel beside the point, serving as window dressing for an impersonal game of cat and mouse.

Shaun Emery (Callum Turner) is a British soldier accused of killing a member of the Taliban during a tour of duty in Afghanistan after the man had already surrendered. Surveillance footage from a body camera seems to validate this assertion, until Shaun’s bannister, Hannah Roberts (Laura Haddock), establishes a lag between the audio and the video feeds of the footage, casting doubt on the evidence. Shaun, Hannah, and others celebrate his acquittal at a local pub, after which the two kiss on the street, pointedly in view of a CCTV camera. She leaves, never to be seen again. When footage surfaces of Shaun hitting Hannah and dragging her out of the camera’s sight, he denies any involvement, but he’s immediately accused of a second crime that’s supported by theoretically objective evidence.

This is all essentially setup, and Chanan threatens to stuff his concept up to the breaking point of contrivance. Investigating the case is Rachel Carey (Holliday Grainger), a brilliant and ambitious detective inspector with a stereotypical taste for stylish jackets and a penchant for playing by her own rules. Her superiors and peers castigate Rachel for her drive, which scans less as an acknowledgement of sexist double standards than as Chanan’s need to define his characters by signpost dialogue. Shaun eludes Rachel, who’s convinced of his guilt, until she begins to uncover a wealth of evidence that connects Shaun’s two murder investigations, as well as a celebrated case in which Rachel foiled a potential terrorist attack.

The twist-a-minute The Capture is compulsively watchable, but we’ve seen much of this before. In addition to 24, which similarly pulled the rug out from under its audience with endless, sometimes ingenious reversals, The Capture also recalls Andrew Davis’s The Fugitive, as well as seemingly every jargon-laden investigative crime show on TV.

Shaun and Rachel are ciphers with stock backstories, and the show’s dozens of other characters often fit into easily recognizable archetypes, from the jealous sidekick to the estranged, earnest wife, to the icy authority figure with shady motives. As the latter, Detective Superintendent Gemma Garland, Lia Williams acquits herself better than much of the rest of the cast, commanding the screen with seeming ease. And in a small, mysterious role, Ron Perlman revels in a sense of understatement, suggesting a bored, bureaucratic comfort with authoritarianism that’s both eerie and funny.

What The Capture doesn’t have is the sense of violation that made 24 such an unmooring experience in its best seasons. That show’s protagonist, Jack Bauer, was a charismatic hawk who did things that most people to the left of Dick Cheney would find monstrous. Kiefer Sutherland allowed you to see the humanity and the savagery of Bauer, which rendered the character all the more disturbing. Whatever its faults, 24 is a distinctive, authentic reaction to the political atrocities that marked the post-9/11 world.

By contrast, the violence of The Capture is just noise to further the plot. Even the notion of doctored surveillance footage has been examined before and more artfully, especially in Philip Kaufman’s atmospheric Rising Sun. A newer element of our surveillance state, social media, is mentioned obligatorily but is barely explored. The Capture sucks the juice out of its pop-cultural reference points, failing to mine our current nightmares on its own terms.

Review: In My Skin Is a Bitingly Poignant, If Cluttered, Coming-of-Age Story

Review: The Optimism of Japan Sinks: 2020 Leads to a Curious Emotional Remove