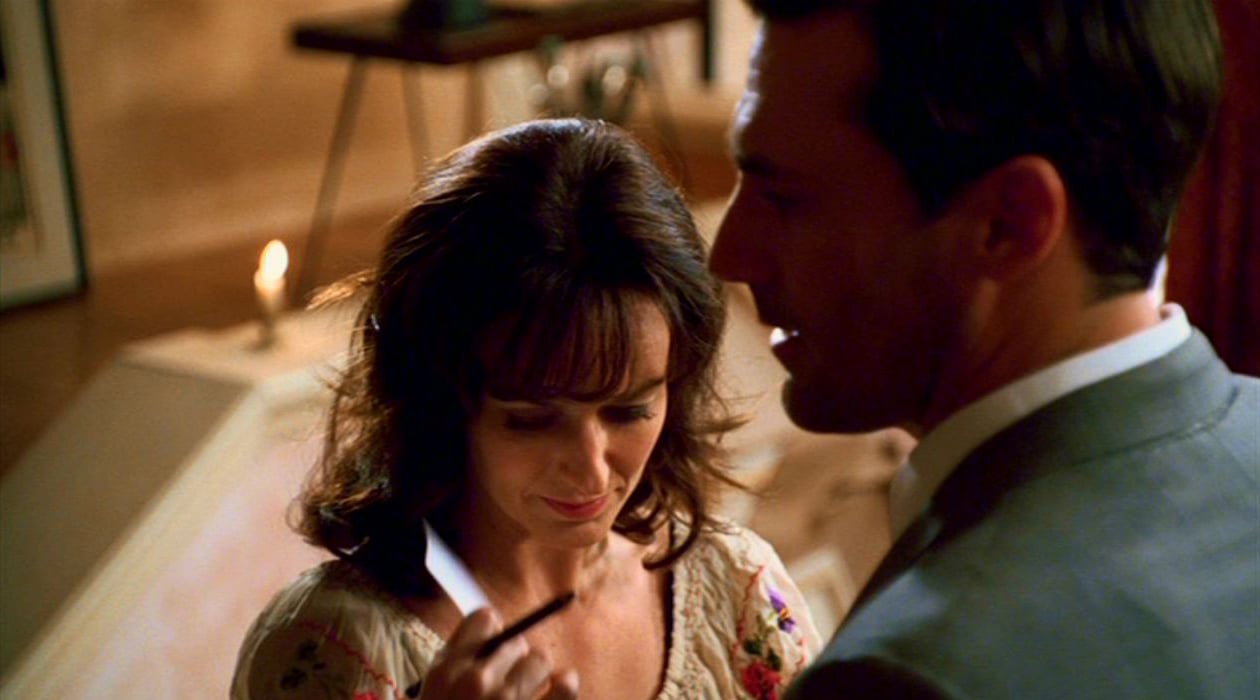 Although I name-checked Todd Haynes’ Far from Heaven in my initial review of Mad Men in Time Out New York, I’ve never really though of it as a major influence on the series—by and large, Matthew Weiner seems to draw much more inspiration from films and literary works that are actual products of the Eisenhower/Kennedy era and not from period pieces created after the fact. But with “The Hobo Code”—the most polished and, to my mind, the most moving episode of Mad Men yet—it’s impossible to deny Haynes’ influence on Weiner. I don’t say so simply because the episode concerns a closeted gay man (Sterling Cooper art director Salvatore Romano, brilliantly portrayed by Bryan Batt) but because of its heartbreaking depiction of self-deception and thwarted desire on several fronts.

“The Hobo Code” also evokes Far from Heaven in terms of visual texture—light, shadow and color are used very deliberately, and the camera angles make the episode feel much more like a film than a TV show (and Mad Men is already much more cinematic to begin with than most small-screen dramas). All of that is only appropriate given the theme of visual cues and unspoken language that pervades the episode.

I expect the revelations about Don’s past to command the most fan attention—yet, as intriguing as they were, I was much more fascinated by the story of the triangle between Salvatore, the visiting client, Elliott (Paul Keeley) and Lois Sadler (Crista Flanagan), the new Sterling Cooper switchboard operator who falls for the closeted art director. Lois is a woman unlike any we’ve seen on the series thus far—like Joan, she’s proactive and prone to somewhat duplicitous behavior, but her motives and MO are entirely different. Instead of using her sexuality to get what she want, she’s like a Jane Austen heroine—incredibly smart, and simultaneously assertive (she’s one of the only women we’ve met on the show who actually pursues what she wants rather than letting it come to her) and neurotic. She’s so taken with the message she gets from one set of symbols (the way Salvatore’s flamboyance overlaps with the stereotype of a sophisticated continental romeo) that she ignores clues to his sexuality. Joan’s remark to the operators about the way she reads signals—“You have voices, I have other things”—underscores the extent to which Lois’ attraction is driven entirely by her (mis)interpretation of signals gleaned from eavesdropping on conversations between Salvatore and his mother.

Salvatore, meanwhile, knows exactly what’s going on with her—the “Oh shit, what am I going to do now?” look on his face as he hangs up the phone after speaking with her is one of the few moments of complete, brutal honesty in the episode. Still, he succumbs to self-deception just as completely as Lois does—he obviously received Elliot’s coded message (“When I mentioned the renovation, I didn’t know if you heard me,” the client says), otherwise he wouldn’t have gone to the hotel bar at all. But his evident surprise when Elliot explicitly tries to seduce him proves that he certainly didn’t expect things to go that far. The big question about Salvatore up until now has been whether his heterosexual façade is being maintained solely for the benefit of those at Sterling Cooper or if it’s an act of self-deception as well; now, it’s very clear that the truth is the latter.

“You’re loud but you’re shy,” Elliot tells Salvatore as they finish their meal, which is a massively insightful reading of the art director’s personality. Salvatore’s bitchiness at work (“You don’t need money to dress better than you do, Wayne”) is practically a neon sign announcing his sexual orientation, but at the same time he mutes the message by dropping bogus signals that he’s straight—signals that, occasionally, make a meta-reference to the theme of coded messages (“The salesman pushed this tie on me for 20 minutes, but I would have bought it right away if I knew it worked,” he tells his subordinates Wayne and Marty). Batt, Flanagan and Keeley are all breathtakingly good, and I sincerely hope we haven’t seen the last of Lois.

While the aesthetics of the episode invoke Haynes’ recreation of the world according to Douglas Sirk, the surprisingly graphic Pete-Peggy sex scene were a notable exception—although the subject matter of Far from Heaven would have been off limits in the 1950s, the way it was presented never violated the content rules of the time. There coupling was remarkable for number of reasons—the contrast between the raw carnality of the act and the intimacy of their whispered exchange after she leaves the office was just insanely sexy, and the encounter set up two moments of magnificent creepiness: The moment where Pete dissects Peggy with his eyes from across the room at P.J. Clarke’s and, even better, the scene where he finally shows some backbone in front of Trudy as they converse on the same couch upon which he ravaged Peggy hours earlier. Pete and Peggy’s story is less concerned with the theme of unspoken signals than Salvatore and Don’s are, but the motif is still present—Peggy’s “mark your man” ad copy for Belle Jolie centers on a sort of code, and while she doesn’t mark Pete, he leaves his sign on her via the torn collar which Don is quick to notice.

Finally, we come to Don’s story, which gives us an insane amount of stuff to chew on. We first see Don when he’s summoned to a solo meeting with Bert Cooper, something that has him spooked until he’s handed the bonus check. The scene between them is incredibly fascinating: Much as Salvatore’s efforts to maintain his façade nonetheless result in coded signals he unwittingly transmits to Elliot, the behavior required to keep the Don Draper persona going yields signals that Cooper detects and which leads him to believe that he and Don are kindred spirits. When Cooper is able to detect that Don is lying about his familiarity with Atlas Shrugged, he explains what he means in words that almost sound like he’s talking down to a child. “It’s strength—we act different. Unsentimental about all the people who depend on our hard work.”

There are strong parallels between the Don/Cooper scene and the dynamite flashback involving young Dick Whitman’s encounter with a hobo played by Paul Schulze (a/k/a Father Phil from The Sopranos and Ryan Chappelle from 24). Both Cooper and the hobo consider themselves superior to the rest of the world because they follow a self-centered philosophy, and both offer to teach Don the secret wisdom that elevates them (as they see it) above the rest of the human pack. It seems pretty likely that the effects of Don’s encounter with the hobo will be explored further in the weeks to come; the effects of Don’s conversation with Cooper, on the other hand, are immediately evident. Don may have not had the time to start reading Atlas Shrugged before the meeting with the Belle Jolie clients, but he was obviously empowered by the faith Cooper showed in him. With his amazing “I’m not here to tell you about Jesus…” speech (a monologue worthy of David Mamet), Don wins the Belle Jolie account through sheer manly swagger, which is how he likewise puts Midge’s bohemian friends in their place.

The blond beatnik in the fez is presented as a lightweight poseur version of the hobo—he talks the talk vis-à-vis his separation from society, but his wounded reaction to Don’s declaration that “the universe is indifferent” shows us that he can’t walk the walk. It’s hard to tell how much Don does (or doesn’t) share Cooper’s sense of superiority over humanity at large, but he sure as hell feels superior to Midge’s friends—the smug putdown he delivers before breezing undisturbed past the cops, armored by his suit (”You can’t”) is as scathing as they come. As we see in the followng scene with his son, though, Don was deeply rattled by the memories that flooded his mind at Midge’s apartment—when he tells Bobby to ask him anything and promises to tell the truth, he’s clearly seeking absolution. Bobby’s response, unintentionally, shuts down Don as swiftly and mercilessly as Don shut down the beatnik. Don’s lies are a burden he can’t easily shrug off, and the last shot of the episode reminds us that the door of his office bears the same coded message that the hobo carved into the gatepost of the Whitman farm: A dishonest man lives here.

Doctor Who Recap: Season 3, Episode 9, “The Family of Blood”