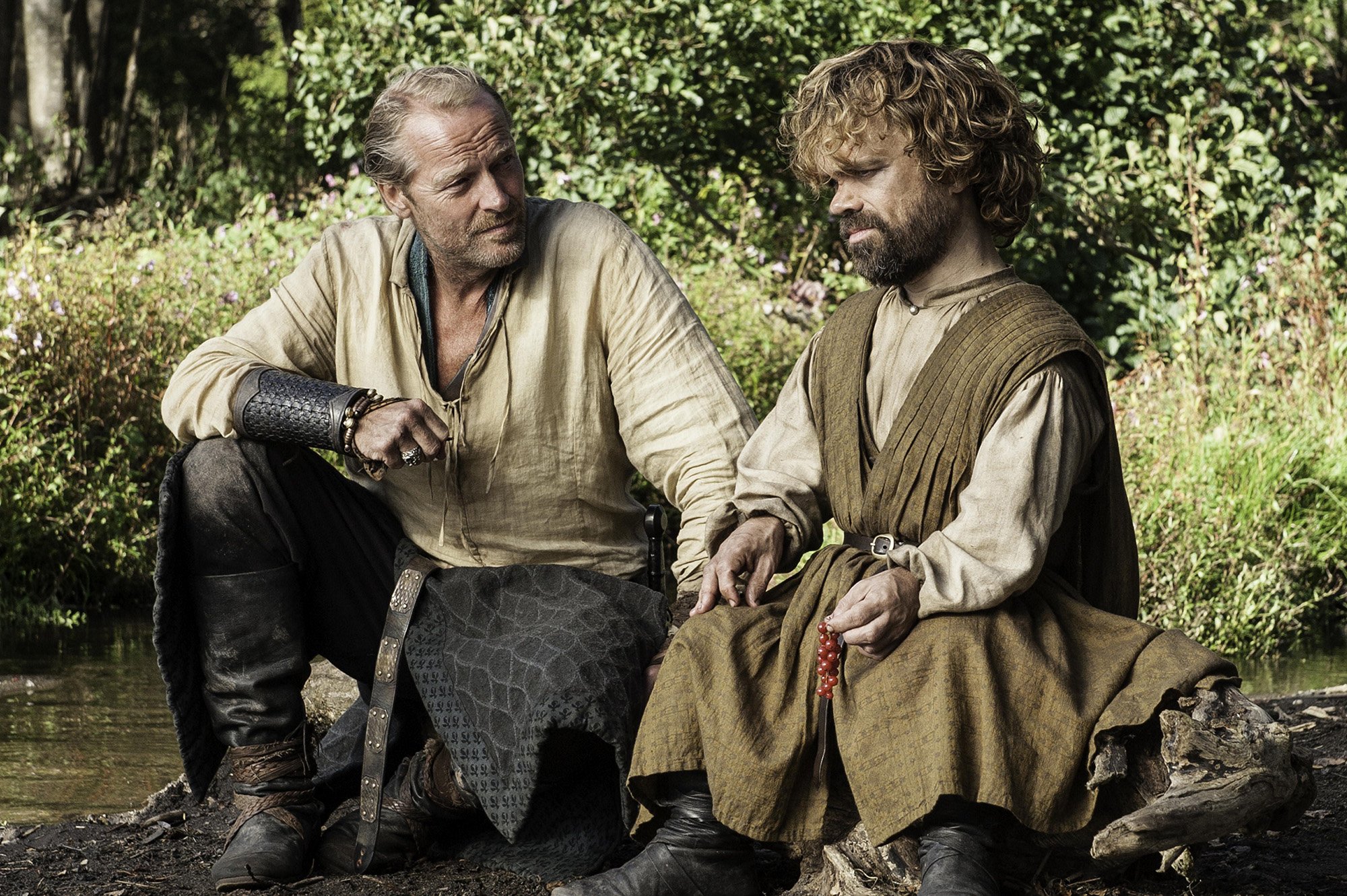 The Game of Faces, as taught to Arya (Maisie Williams) by her fellow corpse-scrubber (Faye Marsay), isn’t as simple as claiming (or meaning) that you are no one. It involves thoroughly convincing someone else that you are someone—just not the person that you were. Like the Game of Thrones, this task of self-effacement and reinvention for the sake of survival is played—whether they’re aware of it or not—by most citizens of Westeros, and those who fail generally end up dead. As Arya’s trainer, the man once known as Jaqen H’ghar (Tom Wlaschiha), might put it, it’s a game that “we never stop playing.” In the case of the monastic assassins dwelling in the House of Black and White, it’s doubly true, for as Arya soon discovers, the dead bodies passing through their temple are preserved beneath it, their faces—entombed in the mausoleum wall for future use—continuing to serve long after they’ve passed on.

There are many reasons to change one’s face. In the case of Jamie (Nikolaj Coster-Waldau) and Bronn (Jerome Flynn), they wear the face-obscuring garb of slaughtered Dornish soldiers so that they can sneak into the Water Gardens and rescue Jamie’s daughter, Myrcella (Nell Tiger Free). Unfortunately, the hint of bloodstains on Bronn’s clothing alerts Myrcella’s suitor, Trystane (Toby Sebastian), causing him to distrust Jamie’s intentions, which in turn gives Ellaria (Indira Varma) and her children, Obara, Tyne, and Nymeria (Keisha Castle-Hughes, Rosabell Laurenti Sellers, and Jessica Henwick) enough time to intercept them. All of these false faces and pretenses are almost enough, but the entire fracas is broken up by Areo Hotah (DeObia Oparei), the trusted bodyguard of Prince Doran (Alexander Siddig). The lesson learned here isn’t as simple as “The truth will out,” however, because even Doran knows that the people aren’t ready to see things as they are, which is why he’s done his best to hide the romance between his son, Trystane, and Myrcella. Lannisters and Martels are Westeros’s Montagues and Capulets, so perhaps the message is instead that—as with ones face changing over time—the truth is something that must be slowly acclimated to.

This is what Littlefinger (Aidan Gillen) has preached and practiced his whole life, and what he continues to do the second he returns to King’s Landing. Though he’s immediately accosted by Lancel (Eugene Simon) on behalf of the Sparrows and warned that “There’s little tolerance for flesh peddlers in the new King’s Landing,” he easily adapts to this latest fad and confronts Cersei Lannister (Lena Headey) head-on, twisting the situation with Sansa Stark (Sophie Turner) and her betrothed Ramsay Bolton (Iwan Rheon) in such a way that it ensures that whether there’s a Baratheon, Bolton, or Stark victory in Winterfell, it’s this false-faced conniver that winds up named the new Warden of the North.

An identity, then, isn’t something that can be easily rushed—it must be cultivated, and made to hold up against those who would tear it down. Olenna Tyrell (Diana Rigg) may be good at playing the Game of Thrones: Her secret poisoning of Joffrey is what led to her daughter, Margaery (Natalie Dormer), ascending to the throne beside King Tommen (Dean-Charles Chapman). But as Olenna’s unofficial title, Queen of Thorns, implies, she’s a bit too blunt and direct to be much good at pretending to be decorous. It’s the problem their whole family faces when confronted with the religious fanatics who claim the truth above all else: Ser Loras (Finn Jones) was previously imprisoned by the High Sparrow (Jonathan Pryce), and now, after Loras’s former lover, Olyvar (Will Tudor), confesses to their homosexual dalliances, both Ser Loras and Margaery—who too hastily bore false witness—are formally arrested for trial.

Sometimes, of course, an identity doesn’t matter, as is the case when Tyrion Lannister (Peter Dinklage) and Jorah Mormont (Iain Glen) are captured by Malko (Adewale Akinnuoye-Agbaje) and a gang of slavers. Who they were before that point is instantly irrelevant—and in Tyrion’s case, deadly—and so instead, the two play to the possibilities of what they might be. Jorah professes to be a formidable warrior, one who has taken on Dothraki in single combat, and thereby earns himself the right to be sold into the recently reopened fighting pits of Meereen, whereas Tyrion buys himself a respite from immediate death on account of his penis’s value. (Seriously: The slavers had planned to chop it off and sell it, as a dwarf’s penis is rumored to have magical properties, but because Tyrion’s is apparently larger than most, they can’t unman him until they’ve made the sale, lest the price drop.)

And, finally, there’s Sansa, who offers a unique twist on the Game of Faces. This episode begins with Ramsay’s crazed lover, Myranda (Charlotte Hope), attending to her, washing the false black dye out of her hair on the eve of her wedding to Ramsay. Clad in traditional Winterfell clothes, back in her home, Sansa has never looked more like herself; all of her changes have been internal. When Myranda attempts to frighten her with all of the foul and horrible things Ramsay has done to women in the past, Sansa coolly rebuffs her and just as icily marries Ramsay beneath the frozen Godwood with only the slightest of hesitations. Even as Ramsay violently takes her virginity (an act shown through the weeping eyes of Alfie Allen’s Reek, who’s been ordered to watch), Sansa keeps her cries to a minimum. We may not be able to control the narrative of what happens to us, but we can at least manage how we react to these things, forcing a genuine smile on a false face while secretly plotting revenge and murder behind it.

Orphan Black Recap: Season 3, Episode 5, “Scarred by Many Past Frustrations”