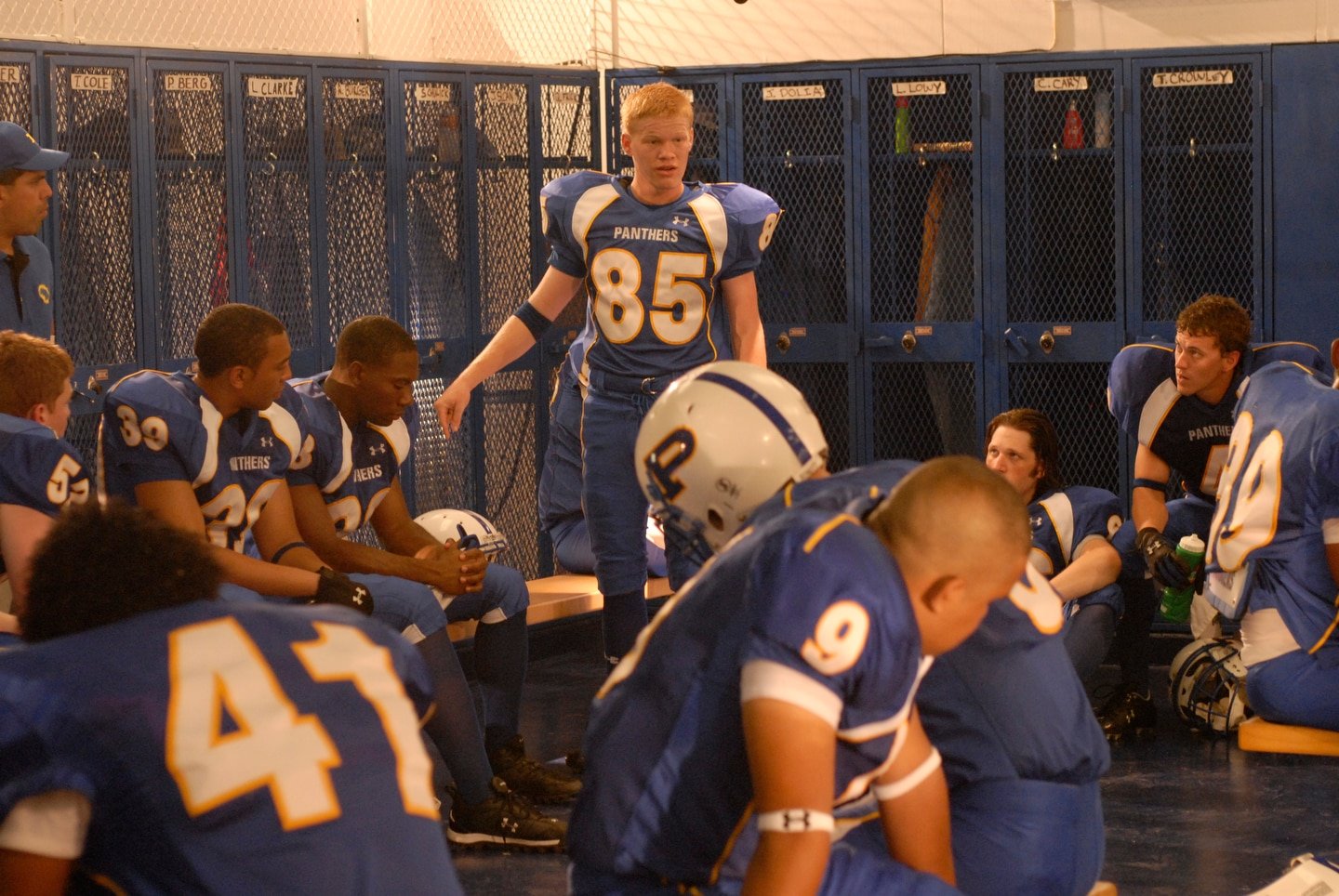 With Coach Taylor back where he belongs, at home with Tami and at the helm of the Panthers, Friday Night Lights serves up its most season one-line season two episode yet. I’ve generally liked the episodes that followed “Last Days of Summer”, but not since then has there been an episode that really felt like Friday Night Lights. Let’s get it on indeed.

At a certain level, “Let’s Get It On” is a housekeeping episode, one of those where it occasionally seems like there’s a list of narrative necessities from which the writers are checking off items: “Deal with fallout from Julie ditching the Swede”. “Give Landry his ‘Weasley is our King’ moment”, etc. On some series, such episodes can ironically grind things to a halt instead of moving the plot forward, but that wasn’t the case here—in every instance, we were rewarded with scenes that were true to the characters as well as to the spirit of the show.

I was especially pleased to see Matt stand up for himself in the aftermath of his rapprochement with Julie. I’ve always enjoyed how Landry is far more confident with women than Matt, even though Matt’s QB1 status arguably makes him the most desirable guy in town, and while it’s entirely logical for him to be a little apprehensive about reconnecting with Julie after getting burned by her, I didn’t expect him to be quite so up front about it. Until Matt mentioned it at the dinner with Smash and Coach, it didn’t occur to me that Matt might feel betrayed by both Julie and Coach for the same reasons. Between his frustration with the Taylors and lingering angst from his diminished role on the team during Coach MacGregor’s brief tenure, Matt had every reason to be pissed off, and I liked seeing him *be* pissed off—during similar situations in the past, viewers have been clued into his feelings via slightly exposition-heavy conversations with Landry, and this felt more organic. Matt’s been a little underused thus far this season, and I hope his emergence as a slightly more aggressive character will be accompanied by a story line independent of the situation with his grandma’s caregiver. His “all fours” comeback to Smash was hilarious, and also just homoerotic enough that I’m surprised it wasn’t shot down by NBC’s Standards and Practices department.

The scenes with Riggins, Lyla and Street in Mexico exemplified the punchy, vibrant filmmaking technique that distinguishes FNL on the technical plane, and after a couple of visually flat episodes I was pleased to see the series display a visual flair that receded a bit after “Last Days of Summer”. Like many, I’m glad that Jason’s obsession with experimental surgery has played itself out, and while the symbolic suicide and rebirth was a little grandiose, that’s also kind of what Jason Street is all about. As I suspect is the case with a great many male viewers, the characters I’ve always identified with the most are Matt and Landry—guys who identify with golden-boy jocks don’t often go on to become film or TV critics. However, as the first season progressed, I had to deal with some serious health issues which turned my life upside down in ways that made it very easy to relate to Street’s adjustment to life in a wheelchair. Jason’s drama-queen approach to his disability may seem repetitive at times, but his behavior is totally consistent with his age. His struggles are one of the main venues through which the show has explored the meaning of the “Clear Eyes, Full Hearts, Can’t Lose” motto—the philosophy that, with the right approach to life, victory can be found in defeat—and we were overdue for a reiteration of that theme, which is one of FNL’s core elements (and one that hadn’t received much attention yet this season). I was fairly certain Jason’s present story arc would end on such a note, and very glad that the ending was not an entirely happy one (Y Tu Mama Tambien was invoked even more blatantly this week than last, with the neat twist of Jason’s disability making a menage a trois impossible, regardless of whether or not Lyla would have taken part in one).

My first time through the episode, I wasn’t too thrilled about the Coach/Tami story, which felt more like a deliberate comic relief plot than anything we’ve ever gotten from the series. It was probably Mac McGill’s involvement that influenced my thinking—his advice to Coach underscored how odd it seemed for our man to not know how to handle his situation, no matter how long it had been since Tami last had a kid—the Taylors just know each other too well. It also seemed odd that no reference was made to the Taylors’ separation while Coach was in Austin, which would have also had a serious effect on Coach and Tami’s sex life. Chandler and Britton played the hell out of the scenes, though, and the breakfast vignette offered a fleeting glimpse at the self-doubt that Coach sometimes displays around the edges (when he says “I’m a man taking care of his wife,” he almost seems like an actor explaining his character’s motivations), which I’ve always found to me among his most interesting qualities. And if the writers made a slight misstep by underestimating the Taylors’ level of intimacy, they were spot on with the understated portrayal of one of Coach’s key qualities: The way he sees through the metaphorical baggage and macho mythology of football and sees it as a game that one should have fun playing, a point nicely made by the scrimmage in which everyone trades positions.

Finally, we come to the Landry/Tyra saga, which, well, I won’t say I’ve defended it in the past, but I have said it’s an area where the writers deserve the benefit of the doubt. I’m officially glad I did so: For the first time, the plot really worked, in part because we saw it through the eyes of Officer Chad Clarke. Glenn Morshower really hit one out of the park, displaying all the qualities that endeared him to 24 fans and making it seem as if we know more about the character than is actually the case at this point. While the raw facts about indecent exposure charges and whatnot would make it easy for him to judge Tyra, he doesn’t seem to—I suspect he’s seen enough domestic abuse in his days on the force to know that the bad girl rep isn’t necessarily her fault. It’s clear that his chief consideration is protecting Landry, not because he sees Tyra as a bad influence, but because he’s afraid of his son becoming a collateral casualty to her unresolved issues. He’s obviously way ahead of his colleagues where the investigation is concerned, and he’s obviously going to be the key figure in the resolution of the crisis. It seems the story will come to a head in the following episode (though with NBC’s famous promo monkeys, you just never know), and while I might have once hoped the writers would just get this one over with and move along, I’m now genuinely eager to see how things play out.