It may just be coincidence (though, given showrunner Steven Moffat’s fondness for building in connections and references between episodes, I wouldn’t bet on it), but the story of the Doctor’s (Matt Smith) new companion, Clara (Jenna-Louise Coleman), is following a very similar trajectory as those of two of his previous fellow travelers. Just as happened with Rose in 2005 and Amy in 2010, when Clara tells the Doctor that for her first trip into time and space, she wants to see “something awesome,” she finds herself being whisked away from present-day Earth to a fantastical adventure in a weird alien environment.

Last week I expressed the expectation that this episode would be a standalone story, separate from the ongoing season arc plot. I was partially right: There’s certainly no sign of the Great Intelligence, the behind-the-scenes adversary of “The Bells of Saint John.” But the Doctor is now fully engaged with the mystery of Clara, and the pre-titles sequence shows him digging through the story of her life. He travels back to observe the meeting of her parents, a chance occurrence as Ellie (Nicola Sian) saves Dave (Michael Dixon) from a hit-and-run accident. He checks in at various points as their daughter grows up, culminating with him observing a 16-year-old Clara standing with her father over Ellie’s grave (nice costume and makeup work to turn Coleman back into a teenager for that scene, by the way). But to his bafflement, the Doctor can find nothing to connect this girl with the 19th-century Clara he met in “The Snowmen” or with Oswin from “Asylum of the Daleks.”

Eventually, we’re going to have to start getting some answers about what’s going on with Clara, but as the final brooding shot of the Doctor indicates, at this point both he and we are still in the dark. We do get some further possible clues in this episode though. At one point, the TARDIS refuses to open for Clara, and she gets the feeling that it doesn’t like her. It may also be significant that the language-translation feature of the TARDIS doesn’t seem to be working for Clara with regard to some of the aliens she meets in this episode. (However, the translation feature of the TARDIS has occasionally failed before, mostly for comic effect; I’m thinking particularly of the Hath in 2008’s “The Doctor’s Daughter.”) It seems like Clara will turn out be some kind of temporal paradox or anomaly, and we’ve seen the TARDIS react badly to such things before: For example, encountering Captain Jack Harkness in “Utopia,” it traveled to the end of the universe itself in an effort to shake him off.

This year’s new addition to Doctor Who’s stable of writers is Neil Cross, the creator of the dark psychological crime thriller series Luther. After writing the forthcoming episode “Hide,” he was then commissioned for a second script, and came up with this piece, which would seem to be somewhat outside his normal comfort zone. He brings the Doctor and Clara to the Saturn-like rings of the planet Akhaten, which contain a bustling marketplace (clearly inspired by the Mos Eisley scenes in Star Wars) where many different creatures from the seven inhabited planets of the system come together.

There’s a vaguely ancient Egyptian feel to this alien environment, ranging from the name Akhaten, to the pyramid on one of the rings’ asteroids which is the main focus of the story, to the mummy that serves as a decoy villain—though, as the Doctor points out, it actually behaves more like a vampire. The use of memories as currency is a nice touch: In order to buy things here, you have to give up an object that’s important to you. This isn’t just a clever bit of world-building, but actually ties in to the plot.

In a frankly rather clumsy piece of either scripting or direction, the Doctor simply wanders away for no apparent reason in order for Clara to be alone when she encounters a small girl who’s clearly running from something. Doctor Who has showcased quite a number of good child actors in important roles over the last few years, and Emilia Jones is no exception. As Merry, the “Queen of Years” who’s apparently a repository of the accumulated songs and stories of her people, she’s the central character of the story, the one who’s supposed to lead a ritual hymn to the “sleeping god” within the pyramid. Jones is entirely natural and believable as she convincingly conveys Merry’s fear of messing up the upcoming performance. She establishes a lovely rapport with Coleman, as Clara—in what’s no doubt a deliberate echo of the governess version of the character in “The Snowmen”—reassures the young girl and leads her back to those searching for her.

The episode was directed by Farren Blackburn, whose previous work on “The Doctor, the Widow, and the Wardrobe” I found to be rather lacking. This is a stronger script, but he still fails to bring much above and beyond the most workmanlike telling of the story. The marketplace seems very small-scale, with no open spaces, giving no sense of a larger world beyond the few dressed corridors we see. The episode is very slow-paced (even discounting the singing sequences, where a measured, deliberate tempo is justifiable), and drags at several points. Just compare the space moped scenes here with the motorcycle sequences from last week’s episode to see the lack of dynamism in Blackburn’s direction.

The critical moment of the plot, when Merry’s song is disrupted and the sleeping god begins to wake, is quite badly mishandled. It’s totally unclear whether it happened by accident (due to Merry making a mistake), or whether the sleeping god caused it (as the Doctor later guesses). Even more annoying, only the Doctor and Clara react to Merry being dragged through space toward the pyramid; not one of the hundreds of other creatures taking part in the ceremony seems to want to do anything about it. (There’s a half-hearted attempt to explain this away by saying they all regard the pyramid as sacred ground, and it’s not remotely believable.) While the profusion of creature designs in this episode is certainly eye-catching (the most impressive is probably the Vigil, a trio of black-coated humanoids with metallic skulls for heads), the fact that they’re all effectively nothing more than background local color is regrettable.

In fairness, there is an effective set piece when the Doctor, Clara, and Merry are trapped inside the pyramid with the awakening creature. The Doctor has to hold off the Vigil, who are trying to force Merry to sacrifice herself to the creature—something which she is quite prepared to do. With the focus narrowing back down to just the main characters, the episode briefly becomes tense and exciting. I’m even prepared to forgive the overuse of the Doctor’s sonic screwdriver, since unlike other episodes where the device has been treated as a magic wand, the writer took care to ensure that the obstacles here were appropriately sonic in nature.

Even though the episode’s storytelling is muddled, it still contains some interesting thematic ideas, particularly an approach to the idea of a soul that’s not conventionally religious. The series has generally tended to be quite antagonistic toward religion—particularly organized religion. Here, though, the Doctor espouses a “live and let live” approach: When he tells Clara about the belief of the people of this system that all life in the universe originated on Akhaten, she asks if it’s true, and he simply replies: “Well, it’s what they believe…It’s a nice story.” Later, he expounds on the notion of “soul” as a term for the sum total of memories, experiences, and circumstances that make up a person with a speech (beautifully delivered by Smith) that sounds like it could have been inspired by Carl Sagan, with an Alice in Wonderland reference thrown in for good measure:

“Hey, do you mind if I tell you a story, one you might not have heard? All the elements in your body were forged many, many millions of years ago, in the heart of a faraway star that exploded and died. That explosion scattered those elements across the desolations of deep space. After so many millions of years those elements came together to form new stars and new planets. And on and on it went—the elements came together and burst apart, forming shoes and ships and sealing wax, and cabbages and kings. Until, eventually, they came together to make you. You are unique in the universe. There is only one Merry Gallel, and there will never be another. Getting rid of that existence isn’t a sacrifice—it is a waste.”

Having convinced Merry not to sacrifice herself, the Doctor then finds himself facing a much bigger problem, as the creature within the pyramid is revealed to be nothing more than an “alarm clock”—a mechanism to wake up the real “sleeping god.” The actual enemy is a voracious mental parasite that covers the entire planet of Akhaten (or perhaps is the planet Akhaten; again, the direction leaves it unclear). It’s a nicely unexpected plot turn that escalates the stakes well, though it does have the effect of making all the stuff with the vampire creature threatening to escape from its cage seem rather redundant.

The Doctor attempts to overload the planet-creature by feeding it his own vast lifetime of memories and experiences. The combination of Smith’s performance and the music and singing in the background is very effective, even though we’ve seen the Doctor give this kind of bombastic speech several times before (most memorably, in 2010’s “The Pandorica Opens”). But the creature manages to successfully absorb the Doctor’s memories; in a final twist which ties together the previously separate strands of plot, it’s Clara who ends up finally destroying it, by utilizing the very leaf which we saw at the top of the episode leading to her parents meeting, and which she has kept ever since her mother died. For her, it signifies an infinity of possible days that her mother might have had.

It’s a lovely, poetic ending. But unfortunately, the way it’s depicted on screen seems to have misled many people into thinking that Akhaten’s star was being destroyed—which would of course instantly doom all life in that system. The confusion is understandable, even though the Doctor explicitly named the object as the planet Akhaten early in the episode, thanks to the fiery CGI effects used to depict the creature and its destruction. (I’d also contend that it was a misjudgment to show crude facial features within the swirling flames while the Doctor and Clara were talking to the creature, making it look like they were confronting a gigantic Halloween pumpkin.) In its haste to get back to Earth, the episode simply forgets about Akhaten, and ends in unnecessary incoherence.

Next Week: An old monster from classic Doctor Who makes its 21st-century return, in Mark Gatiss’s “Cold War.”

Classic Who DVD Recommendation: Actually, the word “recommendation” may not be quite fitting in this context, since it’s one of the poorest stories of the classic series, but “Time and the Rani,” the story which introduced Sylvester McCoy as the seventh Doctor, with Bonnie Langford as his companion, Melanie, did come to mind when I was watching the gaudy background aliens in “The Rings of Akhaten.” The bat-like Tetraps from “Time and the Rani” would have fit right in. 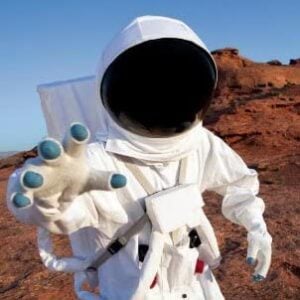 Steven Cooper is a software developer and long-time Doctor Who fan living in Melbourne, Australia.