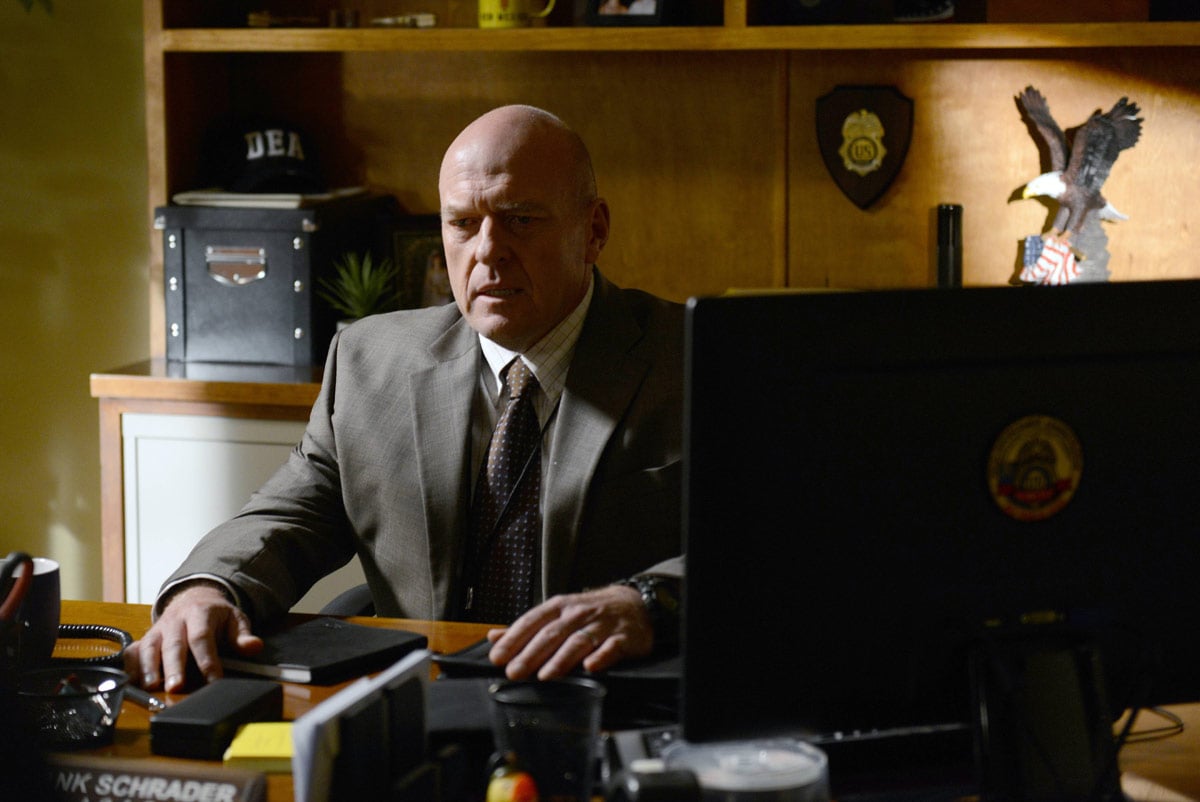 Last week, battle lines were irrevocably drawn in “Blood Money.” Hank (Dean Norris) knows that Walt (Bryan Cranston) is Heisenberg, and Walt now knows that Hank knows. This week’s installment, “Buried,” opens with a quick update on Jesse (Aaron Paul) that telegraphs the episode’s final zinger and then returns us to Walt as he’s leaving Hank’s garage. The western motif is even more explicit this week, as there’s a prolonged image of the men sizing each other up in the tradition of a classic gunfighter duel. (Hank’s garage remote even cheekily resembles a six-shooter from a distance.) Hank lowers the garage door, which serves to literally and figuratively divide the men with an unavoidable degree of finality.

And then its scramble time, as most of “Buried” is concerned with damage control. The episode is a beautiful collection of tense duets of varying configurations between the major players. Hank unexpectedly reaches Skylar (Anna Gunn) before Walt can, and they meet in a diner, which is obviously intended as a safe public place to ease everyone’s mounting anxieties. Acting on the assumption that Skylar’s been essentially held prisoner by Walt over the course of the last year, Hank attempts to manipulate her into becoming an informant without any legal representation. This sequence passive-aggressively parallels the showdown Hank has just had with Walt, as it’s another cloaked verbal skirmish that triggers unexpected mutual discoveries between both parties. Skylar is now aware of Hank’s capacity for sly manipulation, and Hank is afforded a suggestion of the extent of Skylar’s involvement in the Heisenberg enterprise.

More wrenching is Skylar’s subsequent duet with her sister, Marie (Betsy Brandt), who slaps Skylar hard in the face when it suddenly occurs to her that Skylar was complicit with Walt’s activities at the time of her husband’s nearly fatal run-in with a henchman from Walt’s criminal underworld. She attempts to take Skylar’s baby with her, until Hank eases her out the door. Heartbroken, Marie quietly asserts to Hank that he must bring Walt down.

“Buried” is noteworthy for its attention to women. Gunn and Brandt are both afforded the opportunity to do their best work in the series, allowing us to understand how these longtime wives of obsessive men must console and nurture and subtly push, push, push in order to steer their husbands in the desired direction. Marie wants Hank to take legal action on Walt immediately, though Hank reasonably insists that he wants rock-solid proof that definitively nails the bastard, as he knows his career as a law enforcer will end soon afterward. The best case is that Hank’s search for Heisenberg will conclude with him as the butt of vicious jokes when the meth lord is revealed to be his brother-in-law; the worst case is that Hank’s investigated for collusion with Walt.

A sharp, cold exchange between Skylar and Walt parallels Marie’s counseling of Hank and reminds us of her unwaning power over him. Walt, splayed out on the bathroom tile from the exertion of burying his vast pile of money in the desert, tells Skylar that he’ll turn himself in if she promises to keep the money for their children, so that all of his exploits won’t be reduced to nothing. But Skylar is unyielding, reminding him that the money will never remain in the family if he’s caught, while consciously affirming his suspicion that Hank doesn’t have enough evidence to take any decisive legal action.

There are a few telling loose ends. Lydia Rodarte-Quale (Laura Fraser) orchestrates the murders of the men who were intended to replace Walt as producer of the meth she’s globally distributing, and we’re reminded, once again, of this odd character’s creepy and hypocritical mixture of skittishness and blunt savagery. Rodarte-Quale refuses to look on the field that’s littered with the corpses of the men she just murdered, and so she insists that her hand be held as she’s guided with her eyes closed back to her car. We also discover that Jesse might pay dearly for that careless act of contrition last week. The bricks of money that he was last seen throwing out of his car into the streets have been linked back to him and the cops initially proceed to perform a typical song-and-dance of intimidation techniques intended to elicit some pertinent information. Then we see Hank letting himself into the questioning cell, perhaps a few moments away from uncovering the evidence he needs to destroy Walt.

“Buried” is an intense chamber play that’s pointedly composed of wide images that elaborate on the severe gulf between each pair of characters. Jesse is the only major character who’s denied a duet sequence, as his confrontation with Hank will presumably follow next week. The episode also clarified my thoughts on Jesse, whom I’ve found increasingly tedious and difficult to like despite his tangible, and theoretically humanizing, displays of desperation and remorse. The intensity of his present situation has reduced him to the flake he was when the series began, and so he refuses to truly take a stand in any meaningful direction. Jesse lacks both the conviction to turn himself in and the steel to fortify a stance that would allow him to elude capture. Instead, Jesse flails about, begging to be put out of his misery until someone takes him up on the offer, and it’s now more difficult than ever to resist the consideration of the possibility that Jesse may be very close to getting his wish.