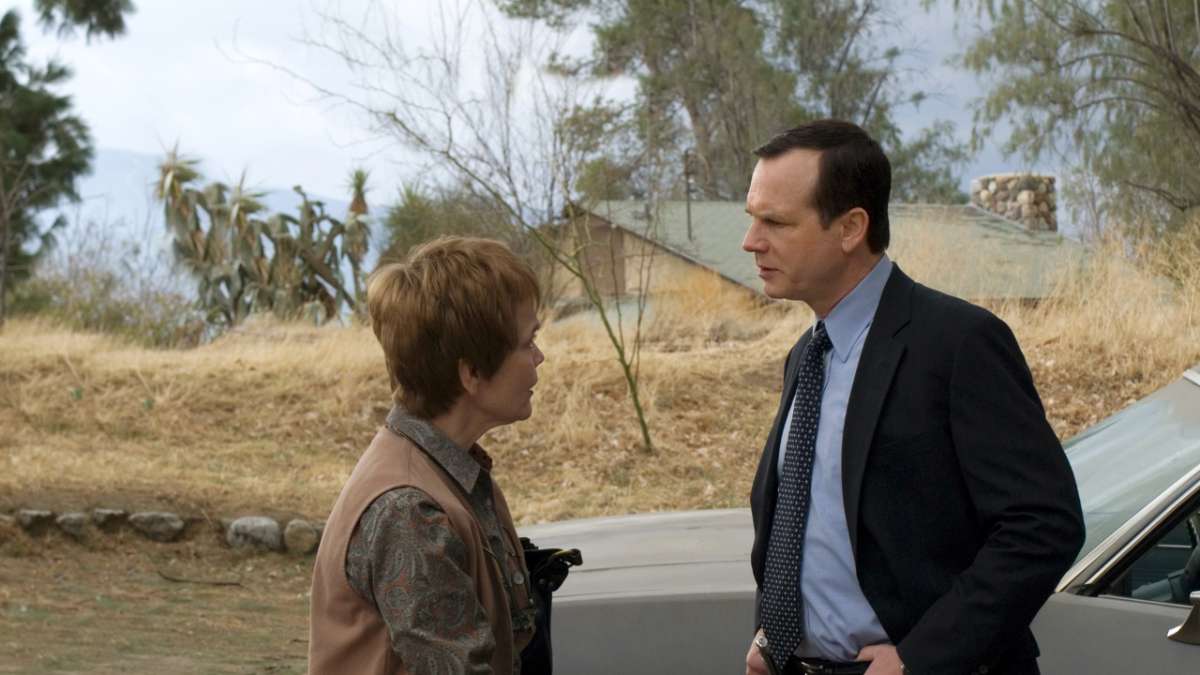 After last week’s generally excellent “Kingdom Come”, Big Love retreats to its Juniper Creek storyline in “Circle Your Wagons,” written by Doug Jung and directed by John Strickland. This is probably the most interesting that Juniper Creek has been in a good long time (perhaps mostly because the compound has been largely sidelined throughout season two), but it is still grating and rather boring to have to go to the compound for lots of backstabbing and squabbling politics when our hearts and interest lie with Bill Henrickson (Bill Paxton) and his increasingly unruly wives. Unfortunately, the Henrickson storylines are also lacking, and the episode ends up being one of the more lackluster ones in the otherwise sterling second season.

One of the nice things about “Circle Your Wagons” is that the show rebounds from a few weeks of sturm und drangwith an episode that reminds us that Big Love can be a really wickedly funny comedy when it wants to be. Sure, there are the concerns over who will lead the UEB in the absence of Roman and Bill’s politicking with his wives to let him buy the gaming company he has already purchased, but the episode features some choice laugh moments as well, from Margie (Ginnifer Goodwin) running into an ex-boyfriend she wants nothing to do with, to Lois (Grace Zabriskie) slowly getting the wheels in her head to turn so she can extricate herself from her marriage to Frank (the absent Bruce Dern). Zabriskie plays the role of Lois, Bill’s mother, rather broadly, so she doesn’t always fit in with the other goings-on, but she’s a welcome respite from the Juniper Creek storylines, where she’s one of the few characters who isn’t either ridiculously quirky or all-consumingly self-serious.

And Zabriskie was needed. After last week’s climactic shooting of Roman Grant (Harry Dean Stanton, appearing only in one scene to show just how badly off Roman is), Bill seemingly makes a play to become the head trustee of the UEB in Roman’s absence (he doesn’t say so outright, but he does suggest that the board pick up a man from outside the compound who is a good businessman to do the job, and there aren’t a lot of people friendly to the UEB’s interests who fit that description), but he runs into opposition from Alby Grant (Matt Ross), Roman’s son, who chooses the aftermath of his father’s shooting to make a play for more power. After being rebuffed by Bill (who tosses Alby from the meeting), Alby enlists the help of his mother (Mary Kay Place) and others around the compound (including his sister Nicki (Chloë Sevigny), Bill’s second wife) in order to have himself proclaimed the next prophet. In one of the few Juniper Creek scenes to match up to the weirdly twisted tone that setting’s scenes seem to get, Alby emulates Joseph Smith himself by staring into a hat with what appears to be a seeing stone, then stands silently as his mother says that she watched his face change from his own to that of Roman to that of Smith. It is a weirdly paced and darkly shot scene that seems a little too bizarre for its own good if you don’t know anything of the various conflicting tales of the authorship of the Book of Mormon, but it earns its keep as an example of how small-minded men like Alby use the trappings of religion and faith to get what they want in the world (and it’s been strongly implied in the past that these sorts of “prophetic” transfers have taken place many times in Juniper Creek’s history).

Meanwhile, in the wake of her father’s shooting, Nicki tried to patch things up with her mother by bringing her a freezer (which she stole from Margie’s garage). All in all, it is a disappointing week for Nicki, who seems to regress to the surly daddy’s girl she was in season one (understandably, since her father is ailing). When her mother refuses to take her in again (she disowned Nicki earlier in the season), Nicki uses the occasion to hit the freezer again and again with the truck she used to haul it down to Juniper Creek. She also seems frantic to get back into the good graces of her family and steals a large sum of money from the UEB office, which she then take to a pseudo-casino and uses to play bingo (shades of her addictive shopping habit in season one). It’s perfectly understandable that Nicki would take these backwards steps in her moment of trauma (the episode opened with her, uncharacteristically, still in bed, her children romping around her as Bill gets dressed), but here’s hoping that she isn’t forever propelled backward by this moment. The character has grown beyond the frankly irritating shrew she was in season one, and the season two Nicki, who seems dedicated to breaking with her old life and committing herself to life as a Henrickson, is a much more interesting character for her increasingly divided loyalties.

The stuff back at Henrickson central with Bill trying to persuade his wives to let him buy Weber Gaming is, on the whole, better than the Juniper Creek stuff (though that should come as no surprise by now), but it is also a bit underwritten and gets lost in a miasma of other storylines for such an important plot point. It’s been nice to see Margie come into her own over the course of this story (she uses her position as the swing vote to find a way to placate everyone when she votes to let Bill buy the company), but her sudden transition from someone who just wants to do what Bill wants her to do to full-on decision maker seems a bit forced (unless she is still just trying to please Bill under the guise of being a decision maker, which is certainly possible). More interesting is (Jeanne Tripplehorn, adding another great performance), who seems closer and closer to a breaking point with every week. The indignities piled on her, forcing her to confront her choice to let Bill take a second wife, now include being the last to know about Bill’s consideration of Weber Gaming (even after he seems to take her thoughts into consideration while the two hit the driving range—Tripplehorn’s tight smile at the end of this scene is a marvel of saying everything with one expression) and being outmaneuvered by both Nicki and Margie in this regard. She increasingly goes outside the family to get the things she wants, turning to the father of Heather (the absent Tina Majorino) to get her daughter Sarah (Amanda Seyfried) back in his good graces so Heather can be the good influence Barb feels Sarah needs after learning more about Sarah’s boyfriend. Barb is still reeling from finding out that her son, Ben (Douglas Smith), was sleeping with his girlfriend, and she’s insistent on keeping Sarah from that life, to the point where she considers re-enrolling Sarah in the mainline LDS church.

Ben’s seeming sexual confusion continues, as he angrily confronts a manager at Henrickson Home Plus over that manager’s innuendos about Margie, whom the manager used to date. The strange chemistry between Ben and Margie has mostly been back-burnered this season, but it returns in full force in this episode (even Margie seems to notice it, telling Ben that Bill understood she had dated other men before marrying him and that he was fine with it, though she wonders if Ben was fine with it). Ben increasingly seems like someone without an anchor, using his initiation into being a priesthood holder as an opportunity to tell Margie things he wouldn’t have only a week before (and Smith’s reading of the line “big spanker” is worth the whole storyline). Though this storyline isn’t as prominent as others, Ben’s frustrations are increasingly coloring the murky undercurrents of the show.

The best scene in the episode is the one when Bill takes his wives to the casino to see exactly what he wants to purchase. Nicki, eager to find something to take her mind off her father, gleefully wanders through the aisles of slot machines and bingo games, also taking a moment to make a play for Margie’s vote by telling her she looks like the girl in a video strip poker game. Barb, appalled, complains that the establishment is illegal under Utah’s law. But Bill says it isn’t a casino at all; it is a gaming establishment. That murky grey territory, that attempt to compromise a higher purpose with earthly concerns, is what drives the best episodes of Big Love, along with the show’s particular understanding of the intimacies of a plural marriage. When the grey is gone from the show (as it is in the Juniper Creek storylines, which paint the compound denizens as too evil), the show suffers. But when it’s present (as it is, for example, in the scene where Bill’s brother Joey wonders aloud whether his feelings for a woman are a true reason to take a second wife, or just natural emotions that mean nothing), the show sings, highlighting important truisms of American life that few other shows even notice.