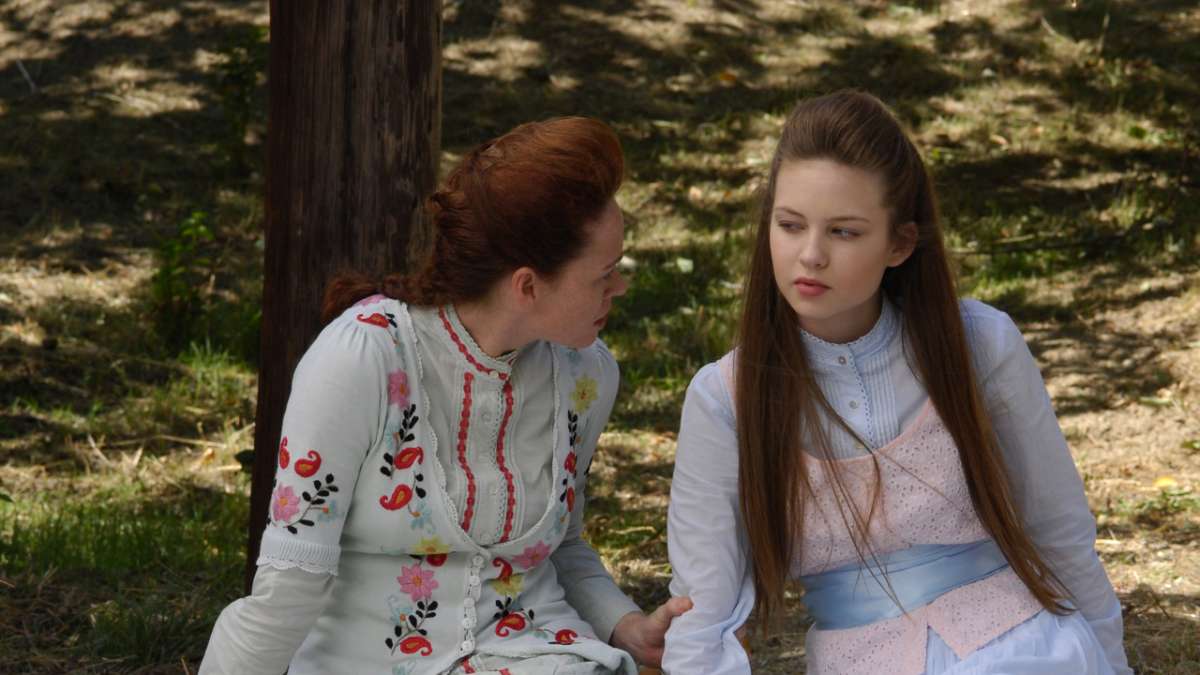 Midway through Monday night’s episode of Big Love, “Reunion,” Bill Henrickson (Bill Paxton) sits in front of a video gambling machine and pokes at the screen, paging through the various games offered. Bill has made a point to the leader of the Juniper Creek compound, Roman Grant (Harry Dean Stanton), of how immoral he finds gambling, but Roman claims that this is the way to go.

By using the machines to profit from others’ sins, the United Effort Brotherhood can pour money into its own way of life. Bill sits before the machine, glasses perched on his nose, and imitates the little beeping noises it makes (Paxton’s performance is probably the weakest among the leads, but he and the writers understand the earnestly dorky and law-abiding way the character engages with the world, and show it in little moments like this). Bill, in his own way in this moment, confronts one of the central conflicts of the whole series.

The central question facing most members of fundamentalist religious groups or sects is how deeply they want to engage with the world. To what degree are they going to follow that old commandment from the Gospel of John to be “in the world but not of the world”? In some ways, the whole of Big Love is about how anyone who professes to believe in a creed or code that goes above and beyond themselves can function at all in mainstream American society, which is built on a long-standing series of compromises designed to guarantee everyone certain rights and freedoms. At one extreme lies the Juniper Creek compound, where those who practice polygamy live in relative seclusion from the rest of the world and carry on in a strange amalgam of 19th century rural life and 21st century intrigue. At the other “extreme” lies what those of us who are not fundamentalists would think of as the normal world—one where The Newlywed Game coyly hints at sex and one where premarital sex is all but expected of teenagers. The Henricksons espouse the values of the Juniper Creek bunch, but live in the world of the suburbs, all sharply contrasting colors and bright, green backyards. Look past the polygamy and the plight of the Henricksons is the plight of any modern mega-church goer; you can’t serve both God and mammon, but don’t you really want to? That the series plays all of these ideas so unironically is one of the factors that seems to keep some from embracing it fully.

Big Love is about the conflict between two worlds, between the life you were leading and the life you are leading, or between the life you are leading and the life you wish you were leading. In many ways, the scenes with Roman are the least interesting simply because Roman is the least bothered by the disparity between his status and his way of life (though this may change as the law sweeps in at the end of the episode to arrest Roman). All of the other characters face conflicts like this, be it between a life they didn’t want to choose and their choice to live it, or between their relatively young age and their status as a wife and mother at that young age. Hell, there’s even a deeply repressed homosexual (Matt Ross’ Alby Grant, a character conceived of and played a bit too broadly, but one who struggles with the tension between self and cause just like everyone else on the series). Teenagers long to tamp down sexual urges and fail. Children raised to be brides for much older men escape into a suburban wonderland of temptation. The first of Bill’s three wives, Barb (Jeanne Tripplehorn), tries to make peace with her disapproving family and can’t even speak to them.

“Reunion” is probably the best episode of the second season so far, largely because it ditches the increasingly irritating shenanigans at Henrickson Home Plus (Bill’s co-worker is consigned to a small scene where he talks with Bill on the phone) and more smoothly integrates the Juniper Creek characters into the main Henrickson storyline (Bill and his second wife, Nicki (Chloë Sevigny) travel to Juniper Creek for the titular event where Bill also meets with the UEB board about the video gambling issue). Juniper Creek isn’t an inherently awful idea for subplots for the series, but it often feels shoehorned in and occasionally didactic, as if HBO and the series’s creators suffered a failure of nerve and decided to show us how the majority of polygamists really live. Stanton’s performance is occasionally worth all of this—he’s simultaneously stately and terrifying—but the setting is never as compelling as Bill’s own compound of three homes in Sandy, Utah.

Continuing with the season’s trend of focusing on one Henrickson wife per episode, much of the action back in Sandy focuses on Margene (Ginnifer Goodwin), the youngest of Bill’s wives and the one who seems to have no prior connection to polygamy before her marriage to Bill. Tripplehorn, Paxton and Sevigny have reaped most of the praise from critics for their performances, but Goodwin is just as good and largely unheralded because what she does is rarely as dramatic as what the others get to play. Margie is sweet and a little naïve, though she inevitably stumbles along toward the right thing to do. A scene like the one where Margie tries to smooth things over between Barb and her sister with an ill-timed phone call could feel like just another scene from any old family soap, but Goodwin plays everything so guilelessly that none of this feels particularly forced. The episode’s climactic scene, where she confronts Barb about her queasily pseudo-sexual relationship with Barb’s son (she’s only five years his senior), was perfectly underplayed by both Goodwin and Tripplehorn, and the sort of scene only this series can do in how it examines the challenges of this alternative family unit and the strengths provided by having more people around.

Speaking of alternative family units, the episode for the first time makes textual the series’s allusions to gay marriage (Roman writes a letter protesting the anti-gay marriage amendment—only because it defined marriage as between ONE man and ONE woman instead of one MAN and one WOMAN). Barb also speaks with two fellow polygamist wives about how all of the normal polygamist families have to stay “closeted.” Fortunately, the episode doesn’t focus too heavily on this, as these sorts of things work better buried into the fabric of the show. One of the foremost arguments against legalizing gay marriage is that if you legalized that, you’d have to legalize things like polygamy shortly thereafter. Big Love’s creators, Mark V. Olsen and Will Scheffer, are a gay couple, and the series (at least in its first season) occasionally felt like the duo’s attempts to say, “C’mon. Could the polygamists be THAT bad?” Couching the whole thing in characters who were unapologetic religious fundamentalists felt like even more of a masterstroke. But this only works at a subtextual level. Once the subtext becomes text, the metaphor stretches too thin, simply because any same-sex relationship between two people is fundamentally different from a polygamous but heterosexual marriage between four.

No mind though. The rest of the episode so skillfully sets up the conflicts between the world of Juniper Creek and the world of the Henricksons, or the world of the Henricksons and the world of the suburbs, that minor bobbles can be forgiven. Nicki confronts her father, Roman, over his outing of Nicki’s family in last season’s governor’s mansion ceremony, tearfully making the break with Juniper Creek, and finally siding with her husband and sister-wives. In the last two episodes, the series has done more for the character of Nicki than it did in the whole first season. In some ways she’s almost as childlike as Margene, especially when dealing with her emotions and passions. Her almost frightened glances up at Bill as he strips himself and then her while the two stand surrounded by sheets hung out to dry (yet another instance of the series using the fundamentalist Mormon idea of the family passing through “veils” in the afterlife to find each other as a literal touchstone—you can see it reflected in the opening credits too) feel more appropriate to a shy girl than to the shrieking harridan the character could be in the first season. And while Barb struggles to make peace with her family, her son Ben (Douglas Smith) tries to get back on the straight and narrow by dallying with the group Straight Edge (he got himself beat up in the process), while also attempting to heed his friend’s and his sister’s advice to break off his sexual relationship with his girlfriend.

At some point, every fundamentalist must confront the idea of whether they’ll choose their self or their creed. Most of the characters on Big Love have made this choice already and are dealing with the emotional fallout in one way or another. The teenagers, though, are all being forced to make this choice anew (even Amanda Seyfried’s Sarah, who’s joined a post-Mormon support group as a way to break with her parents’ life, chastises her sexually active brother, reminding him of when they were taught that it was better to die than give up virginity before marriage), and as the episode ends with Rhonda (Daveigh Chase) having snuck away from Juniper Creek to the Henrickson home (seemingly because of her growing realization that she’s just not attracted to Roman, her promised husband), we’re reminded that Big Love may be just as much about who future generations choose to be as what their parents chose to do now.