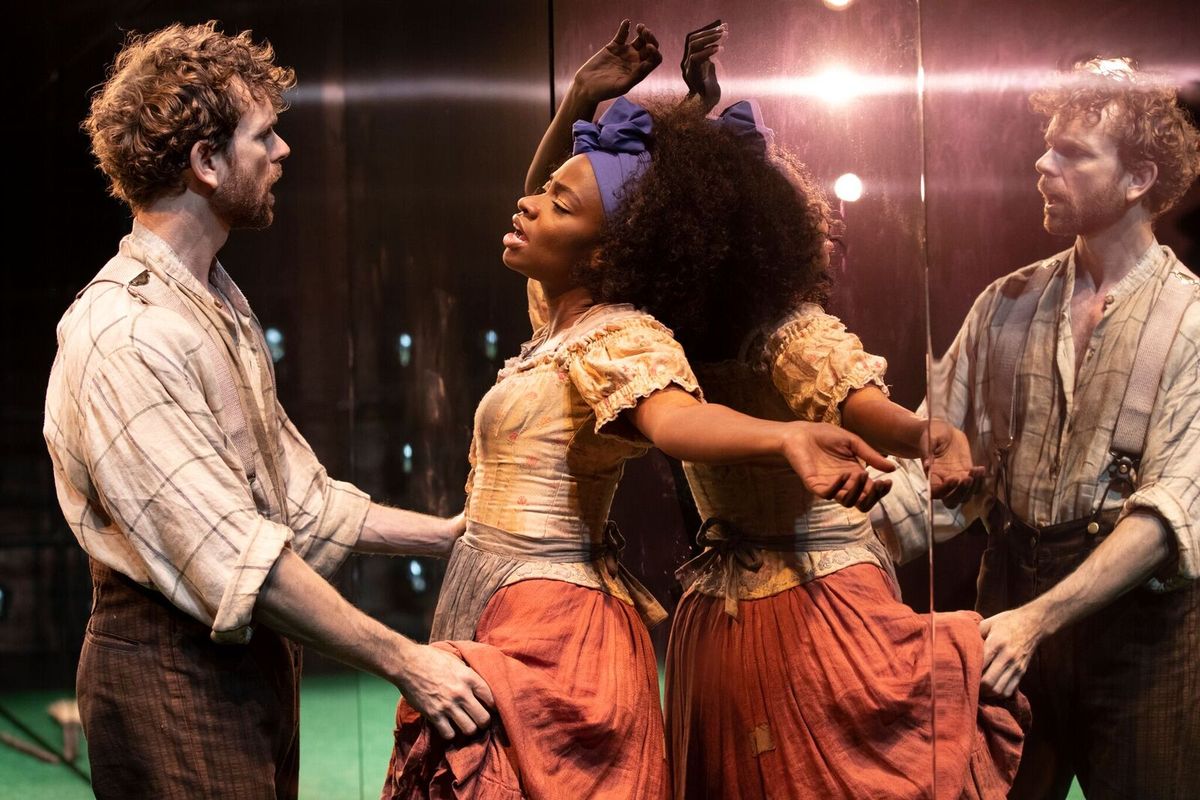 Jeremy O. Harris’s Slave Play simmers in sound: the penetration of anachronistic contemporary music into its early, disturbing pantomimic scenes, the repetitive thrusts of a violin, the climaxing crescendo and acceleration of vibrating, overwhelming electronic noises. It’s a play that demands you never look away—from its floor-to-ceiling mirrors to its graphic depictions of sex acts—exists maybe most profoundly in its aural landscape. (Lindsay Jones is the impactful sound designer.) And if nothing else, it’s one about listening.

That’s not to say that audiences can watch Slave Play with their eyes closed. Coming to terms with what we see when we look at one another—and the impossibility of colorblind connection, even with your most intimate partner—is one of its themes. It’s also a show where you may be drawn to look at those around you. To the extent that that giant full-stage mirror inserts itself into Harris’s play, it’s a useful tool for checking in with the audience: Are they laughing? Are they squirming? And who exactly is doing the laughing or squirming? The mirror doesn’t feel like a metaphor as much as an acknowledgment that Slave Play has become an event—its been slandered, protested, lauded, slammed, idolized—and the experience of attending it feels like being part of a watchable drama in its own right.

But what’s most surprising about Slave Play, given all the hype around it, is what an effective gut-punch of art it is all on its own. In Harris’s debut Broadway outing, the 30-year-old playwright has constructed a searing piece of political theater from the flesh of eight fascinating, fully realized characters. Slave Play teems with the author’s ideas—about race, about relationships, and most centrally about how race shapes relationships—but Harris rolls his thoughts across and off the tongues of his octet so that we seem to see complex, frustrated, oft-insufferable people wrestling with these grand concepts through their own unique despairs. Each unhappy couple in the play is unhappy in its own way.

What each of the three central couples do share, though, is that they are interracial. And Slave Play begins, shockingly, with a trio of scenes which seem to depict enslaved people in the antebellum South engaging in seemingly mutually pleasurable foreplay—and eventually beyond—with their owners or overseers. (Claire Warden is the indispensable intimacy and fight director.) Slave Play dares us to listen—with growing squeamishness—to the vilest of passionate duets, grunts and sighs mixing with horrific epithets.

But—major spoiler ahead—it’s not what it sounds like. When overseer Jim (Paul Alexander Nolan) cracks his whip toward Kaneisha (Joaquina Kalukango), he recoils from the snap himself as if terrified. Characters seem to respond to Rihanna songs playing in the distance. And one couple suddenly starts laughing, as if breaking character. That’s because they are. These aren’t antebellum figures at all, but three contemporary interracial couples, acting out their most warped desires and anxieties in an experimental therapy role-playing session: This is “Antebellum Sexual Performance Therapy,” designed to restore a sex drive to black partners who no longer respond to the touch of their white significant others. And when one unsettled husband in the role of the master gives the safe word, these unsettling scenes grind to a halt so that Teá (Chalia La Tour) and Patricia (Irene Sofia Lucio) can lead a debrief.

Once again, Slave Play offers a listening challenge, and his time it’s for audience members to keep one ear open, even in the midst of a bracing satire of an overly sensitive group therapy session, to the frightening truths the characters struggle to express. The almost saccharine PC-ness of the debrief clashes impossibly and often hilariously with the violent anarchy of the experimental role play that’s come before. “You are heard, you are affirmed, and I see you,” Jim, who’s really a posh Englishman, is reassured, pro forma, when he expresses his upset about the whole premise of being asked to treat his wife like a slave.

That harrowing antebellum role play permeates the debriefing session in sometimes startling ways. As an indentured servant, Dustin (James Cusati-Moyer) mocked Gary (Ato Blankson-Wood), as the overseeing slave, for acting white. Once they’re back in the real world, Dustin, who’s white but insists that he’s not (yet refuses to identify himself racially), adds a more crisply heated tone to his taunting of Gary, attacking his black boyfriend for playing white, “constantly bathing in…gentrification.” Blankson-Wood’s Gary demonstrates a supreme calm while quivering on the edge as he measures his response.

Robert O’Hara, a formidably jaw-dropping playwright himself, stages Slave Play with bold clarity. Those early scenes provide memorable, intimate, frightening stage pictures, but the later ones also stick, too, for the haunted way that Kaneisha looks at Jim as if seeing him for the first time or the vacuous lack of self-awareness with which Alana leaps forward to participate. Each of the performances tingle with specificity—we’ve met people like these before (though maybe not Dustin, who’s a tad over the top)—but these individuals, working hard to define themselves on their own terms and not just as part of a duo, transcend the types they seem at first to represent. Each actor possesses a profound, particular loneliness.

For the white audience member, the second section of Slave Play may bring an uncanny initial feeling of respite. Just like the characters try to absolve themselves of the unsettling emotions that surfaced during the role play, most audience members will probably sigh with relief at the discovery that what’s most discomfiting hasn’t been real as they step away from the experience of watching—nauseously? analytically? voyeuristically?—the opening scenes. It almost seems possible that Harris’s sharpest-edged satire will be directed at the jargonistic psychobabble of Teá and Patricia, played as a brilliantly bantering couple by La Tour and Lucio.

Thank goodness that this performance therapy is as nutty as it sounds, right? There’s surely nothing to this outrageous method but big words and Kleenex (on hand just in case some excess emotions should bubble up). But then, in one of Slave Play’s subtlest turn of events, ever-so-slightly the therapy does take. Kaneisha, Gary, and Phillip gradually find themselves better able to verbalize how they have existed, and continue to exist in the world, and, in seeing themselves more clearly, they see their relationships and partners in a starker light too.

That sense of possible relief slips away as the debriefing session loses its ironic tinge. While we’ve probably been hearing our thoughts in Jim’s incredulous reactions (“This is insane,” he insists, angrily), is he still the voice of reason, a voice that’s increasingly talking over others, still the “sane” one with whom we identify once wrenching truths start to surface? Are we meant to condone the role play itself, to revise our responses to those opening scenes and find some sense of reconciliation with our immense discomfort? And do white audience members deserve to flee their discomfort any more than Jim or Alana or Dustin do? It’s increasingly significant that this therapy has been designed, as Teá and Patricia remind the patients repeatedly, for the black partners to restore their own sexual fulfillment while their white lovers support them in the process. While Slave Play deals with the trauma of interracial relationships with precision, how can we extrapolate its methodology to a more general dissection of race and white supremacy? I’m not sure and I don’t think I’m supposed to be. There’s no bite-size moral here because Harris doesn’t try to break down slavery—its historical legacy and the way it still pulsates today—into bite-size lessons or takeaways.

And when, finally, Slave Play’s characters stop talking over each other for Kalukango’s fiery cadenza of a closing monologue, it’s immediately evident how carefully Harris has woven his strands together. The last 20 minutes of the play justify and necessitate everything that’s come before, and some of those minutes are almost unwatchable as Kalukango and Nolan give themselves over fearlessly to their roles. Harris has crafted a collection of characters from whom it’s impossible to turn away, but those final moments suggest that to listen, really listen, requires uncharted vulnerability and unexplored risk. That initially powerless refrain, “You are heard, you are affirmed, and I see you,” takes on a new tsunami of meaning as Jim responds to Kaneisha’s voice for the first time. The final, raw moments of Slave Play seem to ask audiences—especially white audiences—to consider what they would do if they really heard black voices. In the wake of Slave Play, immediate answers might sound neither comforting nor honest. But listening to its story is one risk that feels entirely necessary.

Slave Play is now playing at the Golden Theatre.

Review: The Inheritance Is a Radical, If Short-Sighted, Take on Howards End

Review: Broadbend, Arkansas and Soft Power Are a Mixed Bag of One-Acts