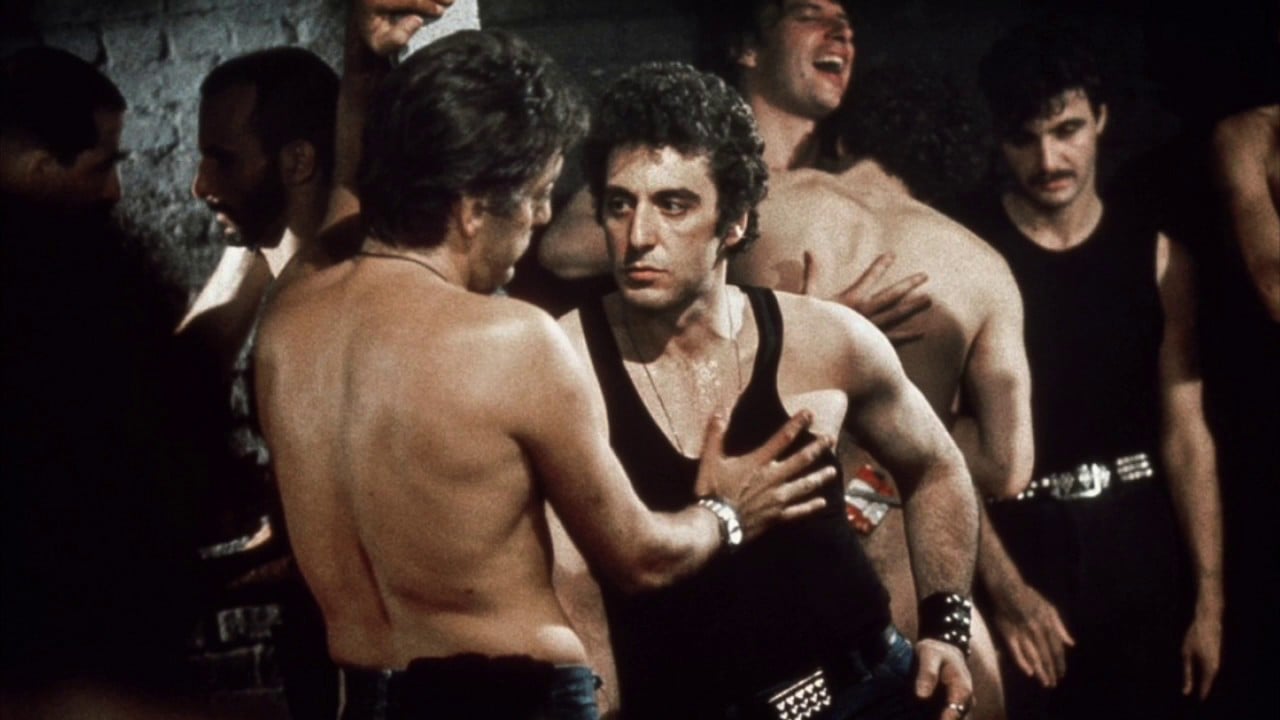 Both on a conceptual level and in practice, Cruising buys into and advances some of the most dangerous myths about homosexuality and the homosexual lifestyle—and you don’t need Vito Russo’s The Celluloid Closet to tell you that. Before today, I only knew William Friedkin’s film, an adaptation of New York Times editor Gerald Walker’s 1970 novel of the same name, as That Film We Don’t Speak Of, and my first exposure to its skuzzy, admittedly transfixing audio-visual atmosphere was through the two featurettes (from the upcoming Warner Home Video DVD release) we were told we should preview prior to press screenings for the film here in New York City. Walking out at the end of yesterday’s screening, still suffering from a rather nasty cold, I felt as if I had been fisted—without the Crisco!

J. Hoberman, in his review of The French Connection in this week’s Village Voice, notes that Friedkin “once had documentary aspirations,” and throughout one of the two featurettes (“Exorcising Cruising”) on the upcoming DVD release of Cruising the director states that the film was not meant to be emblematic of the gay community and that he went into underground leather bars and simply captured what he saw. Except Friedkin doesn’t resist editorializing, saying how the music in the movie is “very edgy and dark”—unlike the music that was actually playing in gay bars at the time. Though he claims to have observed the leather scene “without comment” (which is to say, without passing judgment), he misrepresents it by essentially replacing Donna Summer with the Germs on the soundtrack, recasting truth in a more menacing light.

It doesn’t matter if Friedkin used “documentary-style equipment” during the shooting of the film because every camera angle in Cruising suggests something painstakingly belabored—certainly not something recorded on-the-fly. This is to say nothing about the men the director featured in the film’s club scenes; they may have been recruited from the actual S&M subculture, but that doesn’t mean what they’re doing is an authentic representation of what they would be doing if some asshole director from Hollywood wasn’t yelling “action!” behind a camera propped next to a cum-stained pool table. And it’s action that these guys give Friedkin—sucking face, rubbing each other’s asses, and fellating cop sticks, progressing the notion that gays are all sex maniacs—or, at the very least, don’t believe in foreplay.

Friedkin thinks he’s suave for leaving the identity of the film’s killer up for grabs. The actor who plays the killer in the first murder scene plays the victim in the second one, and the actor who plays the victim in the first one plays the killer in the third, with the actor who played the killer in the second as the victim. Friedkin wants faces to blend into each other, and he creepily sneaks snippets from the killer’s husky-voiced taunts into the soundtrack throughout. The goal is to convey this idea that the murderer is everywhere, and that he can be anyone, but the more unintentional effect this puts across—just as eerily and successfully—is the thought that homosexuality is something contagious. It’s an AIDS metaphor ahead of its time, except in this heterosexual fantasy of the gay world, every gay man gets it.

Cruising is not nearly as ambiguous as Friedkin thinks. In the interest of this discourse, push aside the idiotic metaphoric games the director tries to play with his audience and accept that there are only two killers in the film: Stuart Richards (Richard Cox), music student and bewildering jogger, and Steve Burns (Al Pacino), the undercover officer who catches him and essentially takes over his murdering spree. Stupidly, Friedkin attempts to rationalize the killer’s motives when Steve breaks into Stuart’s apartment and finds letters the young man never sent to his father. Before Stuart is caught, he meets with his father on a park bench, and from their conversation we’re supposed to glean that Stuart kills out of some preposterous need to please his father, which treads way too closely to that prehistoric psychological line that theorized that Oscar Wilde liked to smoke pole because he had a distant father. (By the time we find out that Stuart’s father is actually dead, you’ve no doubt already told Friedkin to go to hell.)

As for Pacino’s character, Friedkin would be nuts if he says he tried to downplay the part of the novel where the police officer becomes hooked on the lifestyle, because it’s right there in Pacino’s performance. Even though the lexicon of S&M scares him, and even though his fat ass makes absolutely no attempt to fit into a pair of blue jeans, Steve takes to the culture just fine—at least the part that involves poppers and Night at the Roxbury-style dancing. Out loud, he says the investigation is getting to him, and though he’s curiously comfortable around the gays, his relationship to them is never sexual. (Pulling down his pants for Stuart in order to arrest him doesn’t seem to count—though it probably marks the turning point between “latent gay” and “gay psychopath.”) It may or may not be Steve entering the leather bar in the Meat Packing District at the end of the film, but that look he gives to the camera is clear: I’m here, I’m queer, and I’m going to fucking kill that fag son of yours that you threw out of the house when you found out he was into musical theater.

Day of Wrath: Church of Cinema