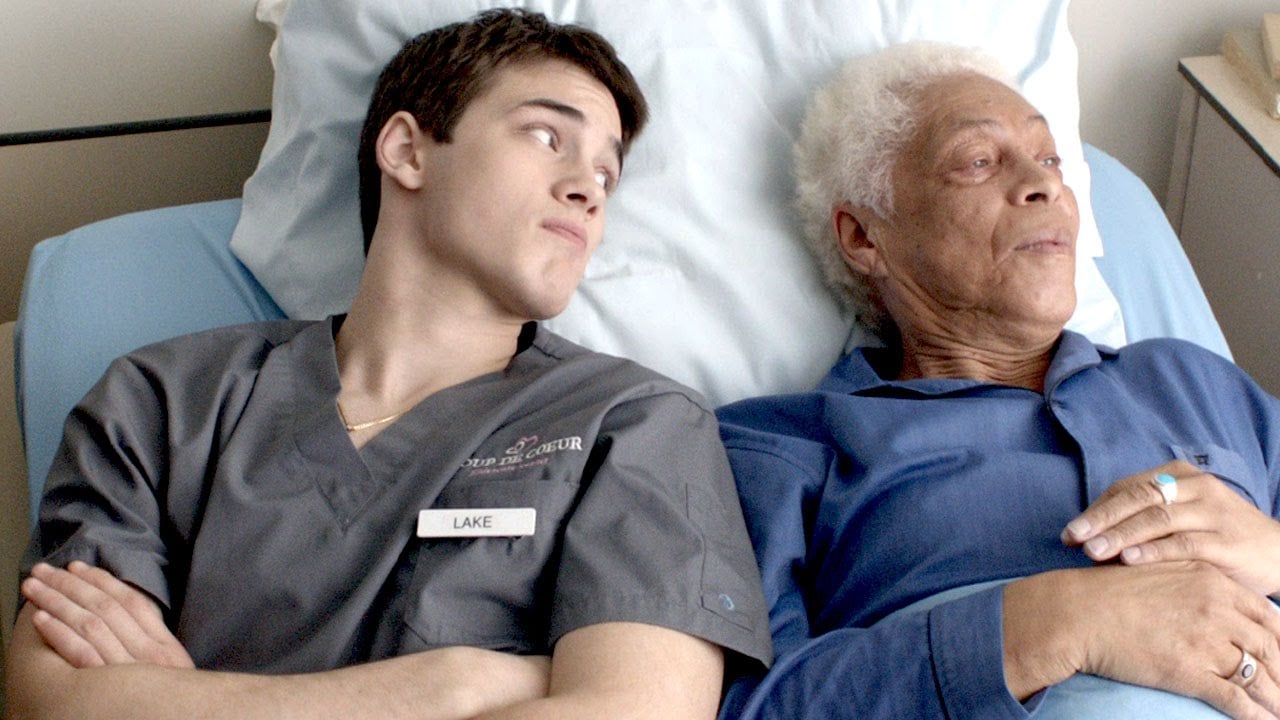 Mahatma Gandhi isâ€”and always has beenâ€”many things to many people, but a sex symbol? In Canadian provocateur Bruce LaBruceâ€™s bluntly titled Gerontophilia, a hugely enlarged rendering of the Indian politicianâ€™s visage looms, wall-mounted, over the bed of young protagonist Lake (Pier-Gabriel Lajoie). Itâ€™s a sly sight gag, pointing both to the ostensibly straight Lakeâ€™s burgeoning desire for aging male flesh, and functioning as a subversive re-contextualization of the familiar. This goes for the subject matter, which has been addressed in films like Hal Ashbyâ€™s evergreen Harold and Maude, but still remains a tabooâ€”as does LaBruceâ€™s work. Anyone familiar with the directorâ€™s thematically transgressive, sexually explicit canon (No Skin Off My Ass, Skin Flick) might be expecting a result even more startling than usual given the premise, but Gerontophilia may be his most formally conservative film to date.

Propelled by the blooming affection between Lake, whose name suggests the openness and fluidity with which LaBruce approaches issues of sexuality, and black eightysomething Melvin Peabody (Walter Boden), whom Lake springs from a care home in order to embark on a road trip, Gerontophilia is engaging from the start and pleasingly non-judgemental of its protagonistâ€™s peccadilloes. However, itâ€™s badly hamstrung by a wan central performance from the pretty but ineffectual Lajoie, and there are some terribly ham-fisted dramaturgical moments (itâ€™s impossible not to howl with laughter when one character takes one of the goofiest, most-telegraphed tumbles down a staircase youâ€™ll ever see). Yet the overriding impression is of a sensitive, normalizing approach to a thorny subject, enlivened considerably by Brodenâ€™s sparky performance as the born-again Peabody. Oh, and further bonus points for the inspired use of Pulpâ€™s â€śHelp the Agedâ€ť over the closing credits, though Iâ€™m not entirely sure thatâ€™s what Jarvis Cocker was singing about.

Promising an adventure, but delivering only a ploddingly predictable triumph-over-adversity narrative, John Curranâ€™s episodic (and tellingly blandly titled) Tracks makes heavy weather of adapting the memoir of the same name by Robyn Davidson, a young Australian woman who, in 1975, embarked on a 67-month trip from Alice Springs to the Indian Ocean. Mia Wasikowska plays Davidson as a cynical loner without much time for anyone other than her beloved dog, Diggity (whom, sadly, at no point does she ever address after shouting the word â€śNo!â€ť), and the small fleet of large camels sheâ€™s trained. The film may be brave in spotlighting such an inherently unlikable character, but it fails to provide a truly compelling reason as to why we should be interested in Davidsonâ€™s foolhardy quest; woozily shot flashbacks reveal a family bereavement, but the film treats her journey like a selfish, particularly bloody-minded â€śgap yearâ€ťâ€”or, for the Americans reading this, a post-high school sabbatical. Itâ€™s made even less clear why everyone who the standoffish Davidson meets on her journey is prepared to bend over backward to help herâ€”including, most egregiously, an Aboriginal man, Eddie (Roly Mintuma), whoâ€™s given an unmistakable sprinkling of magical-negro dust. Throughout there persists the nagging suspicion that the real-life Davidson would have been far flintier and eccentric than the film ever allows her to be, or is interested in finding out.

However, if one tires of the predictable story and frequent segues into sentimentality, thereâ€™s always Mandy Walkerâ€™s beautiful, sometimes breathtaking, widescreen landscape cinematography to catch the eye. Elsewhere, the lanky Adam Driver, here sporting even stragglier facial hair than usual, injects some much-needed color in his intermittent appearances as a goofy, good-hearted photojournalist on his own improbable quest to thaw Robinâ€™s heart.

Cult Japanese director Sion Sono (Cold Fish, Love Exposure) is well-known for the thematic outrageousness and Grand Guignol aesthetic overdrive of his films. His latest, Why Donâ€™t You Play in Hell?, is no exception, an arch, deeply meta ode to the joys of cinephilia, boasting overcranked formalism (crash zooms, freeze frames, wipe cuts) and a near-deafening sound mix. The convoluted plot revolves around the interaction between rival yakuza gangs, an earnest collective of deadbeat but spirited filmmakers named, wonderfully, â€śThe Fuck Bombers,â€ť and a hapless bystander who has the misfortune to be in the wrong place at the wrong time. Connecting them all is a single femme fatale, the daughter of a mafia boss whose time as a child actor was cut short, but is now a reluctant movie star herself.

The narrative is awkwardly stitched together and hugely telegraphed (we can guess fairly early on exactly how everything will come together) and the pace frequently drags, but in the interim thereâ€™s plenty of fun to be had in seeing just how far Sono will push his barrage of farce, references (kung-fu movies most frequently), and ultra-violence in the name of cinema. The answer is pretty far, though the effect is more often laughable than visceralâ€”a fact compounded by Sonoâ€™s use of lamentably unconvincing CGI blood which often simply dissolves mid-spray. Despite its excesses, Sonoâ€™s film is deeply nostalgic and sentimental about cinema culture from a fan and filmmaker point of view. As sour on the movie business as Mulholland Drive (Sono, like Lynch, makes an explicit connection between producing and outright gangsterism), but as deeply in love with the creative side of the medium as the work of Quentin Tarantino, itâ€™s designed as catnip for midnight-movie hounds. But thereâ€™s one nagging irony to the whole endeavor: Despite its openly fetishistic take on 35mm, itâ€™s shot on shiny digital.

The Venice Film Festival runs from from August 28â€”September 7.

Review: One Direction: This Is Us