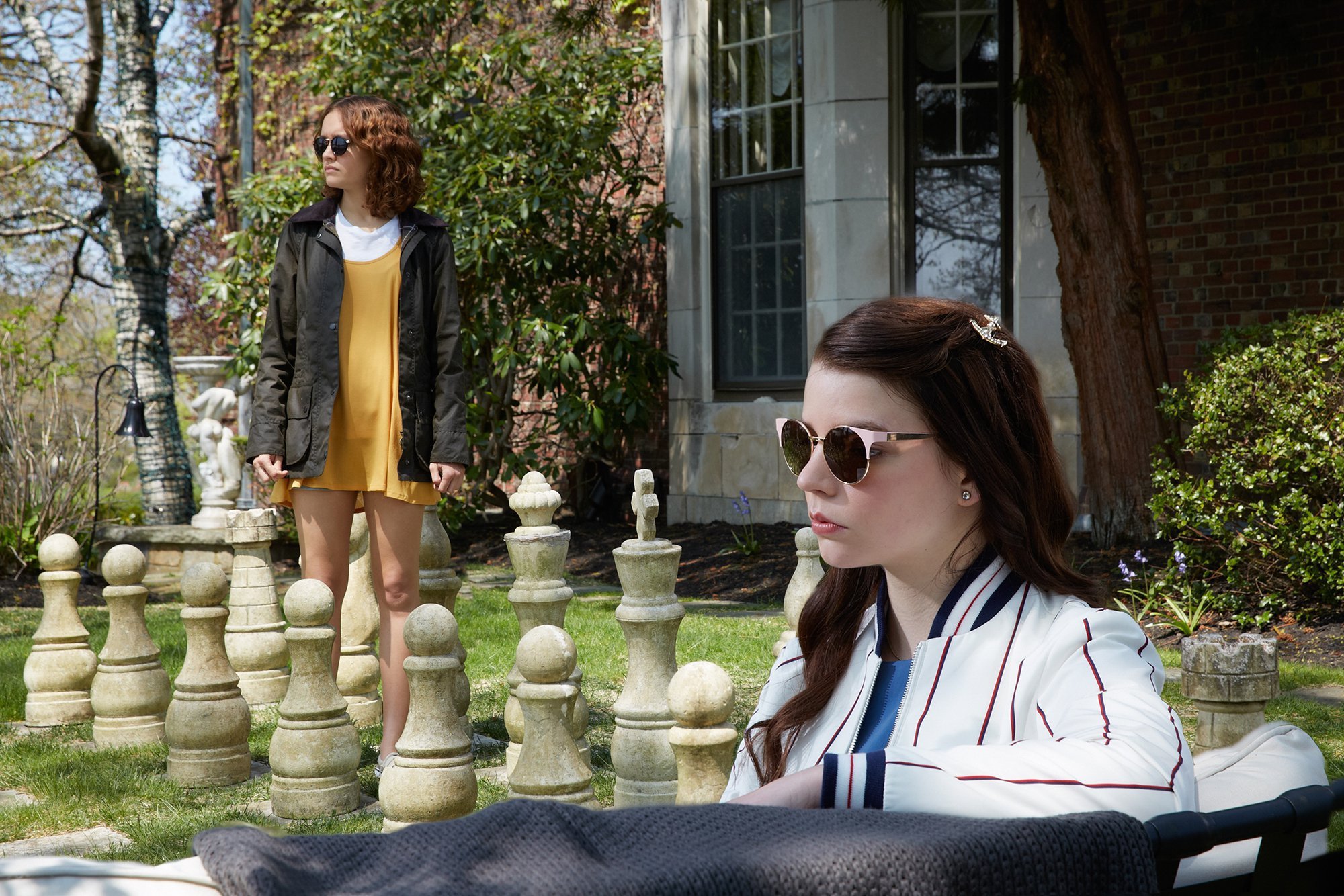 A blackly comic study of the sociopathy of the upper crust, writer-director Cory Finley’s directorial debut, Thoroughbreds, centers on the intense friendship between two seriously messed up young women. Creepily expressionless and off-puttingly blunt, Amanda (Olivia Cooke) is, in her own words, “not a bad person,” she simply has no internal emotion. That trait comes in handy when Amanda takes it upon herself to euthanize one of her ponies, a deed which she can describe in nauseatingly grisly detail without batting an eye. By comparison, tight-laced boarding-school girl Lily (Anya Taylor-Joy) may seem like the model of decency, but as she becomes more and more consumed by her resentment of her dickish stepfather, Mark (Paul Sparks), her prim and proper façade falls away to reveal the deep-seated dishonesty, narcissism, and ruthlessness lurking beneath the surface.

Estranged childhood friends who haven’t seen each other in years, the girls reconnect over SAT tutoring sessions at Lily’s palatial mansion. Amanda’s brusque manner at first chafes against her erstwhile companion’s civility, but Lily soon becomes fascinated by Amanda’s incisiveness, as well as her knack for mimicking human emotions, including a well-rehearsed method for convincingly pretending to cry. So different in their manner, the girls share one particular trait—a dearth of empathy—that will eventually send their relationship down a dark path: namely, a plot to kill Mark.

Finley’s screenplay is full of sharp, exactingly timed exchanges whose rat-a-tat rhythms exert a spellbinding pull, even if the dialogue at times comes off as artificial and mannered. The film is ultimately a work of calculation, but Finley delivers its gnarly laughs and devilish little shocks with confidence and panache. Drawing heavily on Stanley Kubrick’s The Shining for inspiration, Finley employs a dissonant score, thudding chapter titles, and sweeping Steadicam shots that rove through a gargantuan manse that suggests the second coming of the Overlook Hotel—all of which work to lend Thoroughbreds an atmosphere of icy dread from its opening shots.

Throughout, Finley cleverly alters our perceptions of Lily and Amanda, gradually shifting our allegiances from one girl to the other while never betraying the characters’ distinctly peculiar personalities. The duo’s increasingly malign behavior grows organically from their poisonous relationship, in which Lily’s selfishness finds reinforcement in Amanda’s cold rationality. Their odd-couple friendship feels natural—even inevitable—thanks to Cooke and Taylor-Joy’s prickly chemistry. Cooke delivers Amanda’s tart little truth bombs with unflappable deadpan finesse, while Taylor-Joy ably carries the emotional weight of the film, bringing an authenticity to Lily’s escalating moral crisis that lends the plot’s machinations a sense of poignancy.

The film, however, ultimately keeps us at a distance from Amanda and Lily, regarding their behavior with the affectless detachment of a Bret Easton Ellis novel. We’re alternately unsettled and amused by their particular brand of affluent misanthropy but always insulated from their actions by chilly modernist techniques—spare sound design, precisely symmetrical mise-en-scène, grotesquely stylized violence—cribbed from art-cinema provocateurs like Yorgos Lanthimos and Park Chan-wook. This doggedly aloof tone highlights the central irony of Thoroughbreds: It’s a film about the disastrous perils of too little empathy, but it never evinces much of its own.

Review: The Death of Stalin