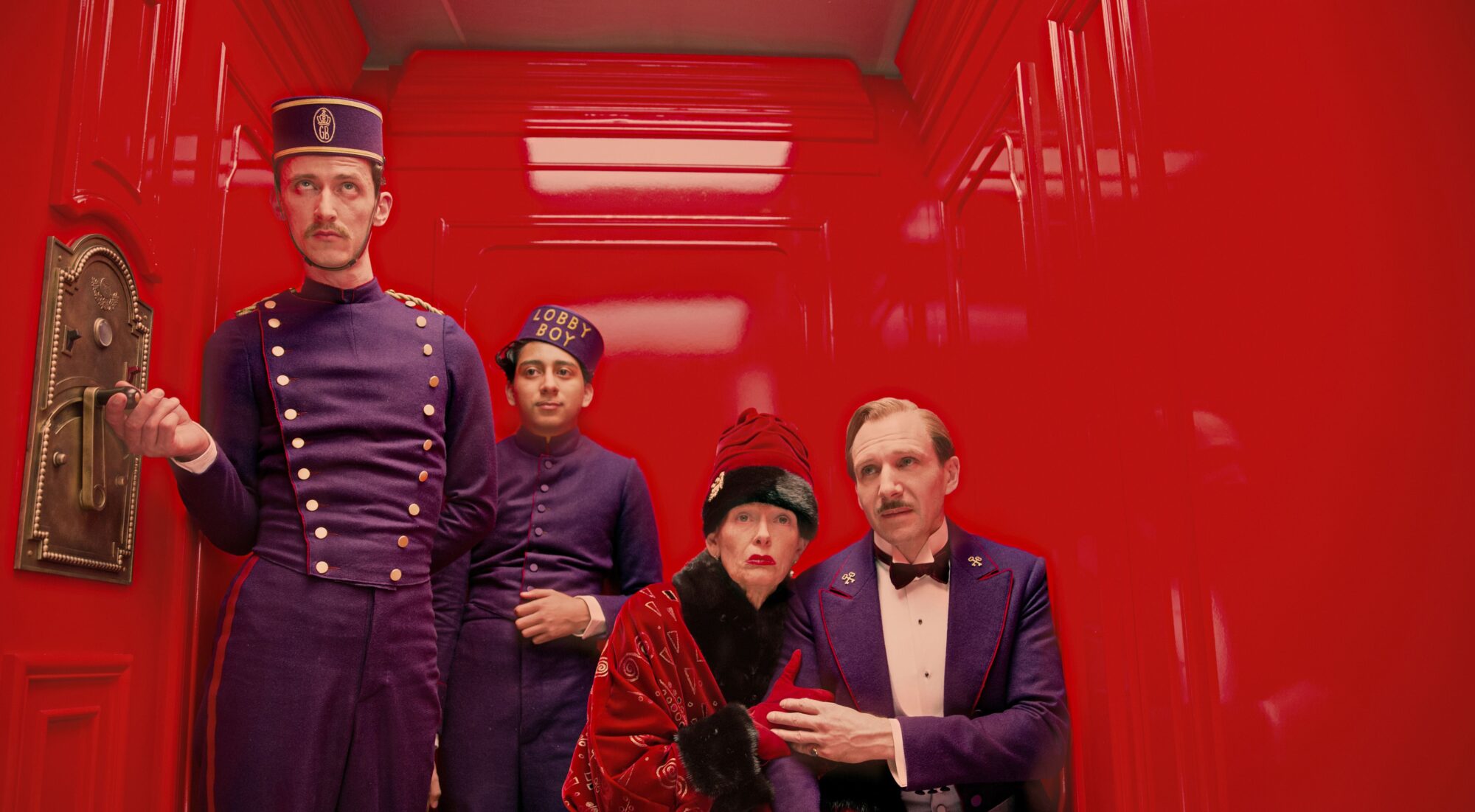 The mess and muddle of violence might not seem like appropriate subject matter for Wes Anderson’s films, given their precise demarcations of space and color, deliberate dollhouse-like spatial compositions, and spring-loaded narratives; such disorder often seems like the last thing these painstakingly constructed universes should permit. But the specter is always there, the wolf at the door in movies concerned with people’s capacity to harm one another. That damage is generally manifested verbally (via neglect, haughtiness, and offhand cruelty), but there are times when it explodes into battles and brawls that allow a bit of cathartic breathing room from the oppressive stylization of Anderson’s work. Posed as an affront to these neatly ordered worlds, it’s in these moments that his houses of cards, if they don’t exactly collapse, at least shudder a bit, hinting at the darkness lurking outside all of their fussy formalism.

Set primarily during a stormy interwar period beset by the looming clouds of fascism, The Grand Budapest Hotel is Anderson’s most violent film yet. It’s also his most characteristic, which means much, much more of everything you’d expect: fey, fragile characters spouting stylized dialogue; stories within stories within stories; elaborate uniforms; color schemes that vary between thrift-store shabbiness and sweet-shop luster (orange sherbet in one scenario, rose-pink fondant in another). After two brief preludes, the second featuring a writer (played first by Tom Wilkinson, then by Jude Law in a ‘60s-set flashback) describing his experience with the titular hotel, the story sinks into its lush early-‘30s setting, the froofy old-word decadence among which M. Gustave (Ralph Fiennes), a master concierge, beds rich old ladies while managing the hotel with military-like meticulousness. This perfectly calibrated timepiece is eventually disturbed by a murder, a perfunctory plot point that allows Anderson to spin out the action into new realms and take-offs, from a prison break which merges Bresson with Mouse Trap, to a bobsled chase that pushes our heroes through a ridiculous battery of Winter Olympics-style events.

All this occurs across the snow-capped peaks and verdant valleys of Zubrowka, a fictional country anchored by the Grand Budapest, an immense mountain hideaway accessible only by cable car. The concept of creating an entire kingdom for his tics and fasciations to play out in lockstep rhythm is treated with appropriate levity by Anderson, who repeatedly parodies how low the stakes are in this realm of color-coded dominoes, staging a lengthy heart to heart while escape alarms sound, a moment of silence in the face of a hail of bullets, with repeated establishing shots of what look like the world’s most detailed cardboard dioramas. But even these jokes have a purpose. Zubrowka is a snow-globe simulacrum defined by its fakeness and fragility. The tenuous relationship between several brittle bubble worlds is an especially fraught topic when joined up to the days preceding WWII, perhaps the ultimate moment of tidal destruction, and unlike the recent The Monuments Men, which Grand Budapest Hotel outclasses in nearly every way, the film cleanly integrates both cuteness and horror into the same uneasy space.

It’s fitting that a recurring piece of pastry plays a role in the story, since Anderson seems to be daring us to view his work as mere confection, while offering subtle evidence that there’s more at play. This all comes back to those violent intrusions, which have long been present in the director’s work, emblematic moments that detail traumas without otherwise breaking stride. But it’s useful to compare Margot Tenenbaum’s delicately lopped-off ring finger (itself a concise image of romantic impossibility) with the set of four digits lost here, posed like Vienna sausages in the snow before being scooped up by a character who’s basically evil incarnate.

So while the violence may still be delicately staged (an early conflict with imperial soldiers yields mirrored scuffles and matching nosebleeds for Gustave and his assistant Zero, played by Tony Revolori), there’s a much deeper sense of darkness behind it than usual. It’s telling how that scuffle eventually ties up, with another reflecting scenario near the end of the film, one that defies Gustave’s imagined substructure of polite, clear-headed men preventing a total descent into madness. Inspired by the writings of Stefan Zweig, Grand Budapest Hotel also has the morbid dreaminess of a Grimm fairy tale: quaint and picturesque, but reflecting real-world anxieties which necessitate the softening fictionalization of such fears.

As always, Anderson places his trademark precision in direct confrontation with the chaos and confusion menacing his beloved characters. Embraced by both the director and his concierge protagonist, this sort of fastidiousness plays as a defense mechanism, the summation of a film concerned with waging quixotic conflict against the inexorable flow of time. Grand Budapest Hotel presents a whole network of people trying vainly to capture the ghosts of the past, communicating a telescoped nostalgia for worlds vanished before one was able to experience them. The sum effect is one of great sadness, but the formal precision also doubles as a form of optimism, facilitating the creation of clockwork realities which, if not approaching or precluding our own, can at least, in the words of one character here, “sustain the illusion with marvelous grace.”