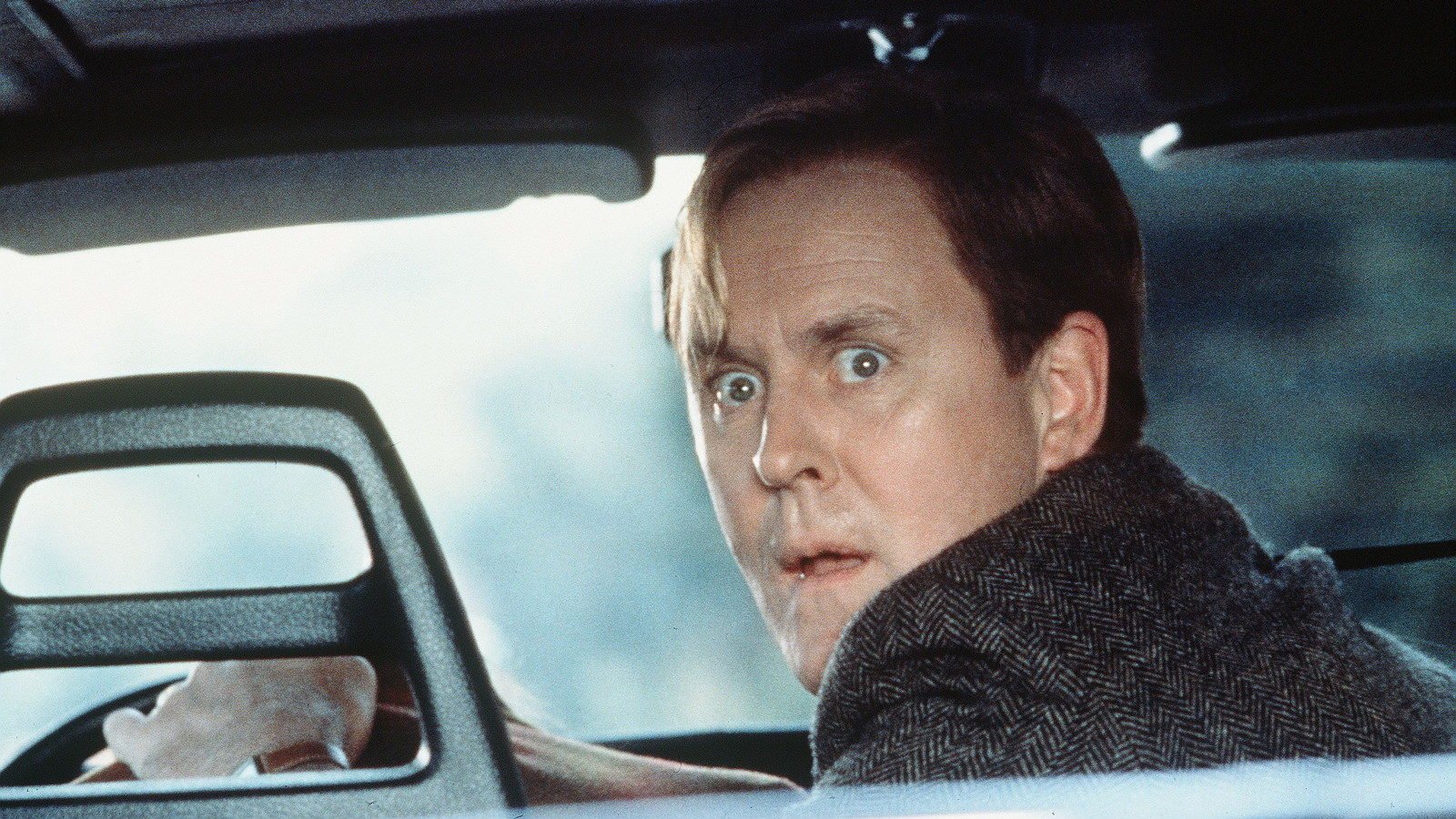 Ever since audiences ran screaming from the premiere of Auguste and Louis Lumière’s 1895 short black-and-white silent documentary Arrival of a Train at La Ciotat, the histories of filmgoing and horror have been inextricably intertwined. Through the decades—and subsequent crazes for color and sound, stereoscopy and anamorphosis—since that train threatened to barrel into the front row, there’s never been a time when audiences didn’t clamor for the palpating fingers of fear. Horror films remain perennially popular, despite periodic (and always exaggerated) rumors of their demise, even in the face of steadily declining ticket sales and desperately shifting models of distribution.

Into the new millennium, horror films have retained their power to shock and outrage by continuing to plumb our deepest primordial terrors and incarnate our sickest, most socially unpalatable fantasies. They are, in what amounts to a particularly delicious irony, a “safe space” in which we can explore these otherwise unfathomable facets of our true selves, while yet consoling ourselves with the knowledge that “it’s only a movie.”

At the same time, the genre manages to find fresh and powerful metaphors for where we’re at as a society and how we endure fractious, fearful times. For every eviscerated remake or toothless throwback, there’s a startlingly fresh take on the genre’s most time-honored tropes; for every milquetoast PG-13 compromise, there’s a ferocious take-no-prisoners attempt to push the envelope on what we can honestly say about ourselves. And some of our favorites are currently streaming on Netflix. Budd Wilkins 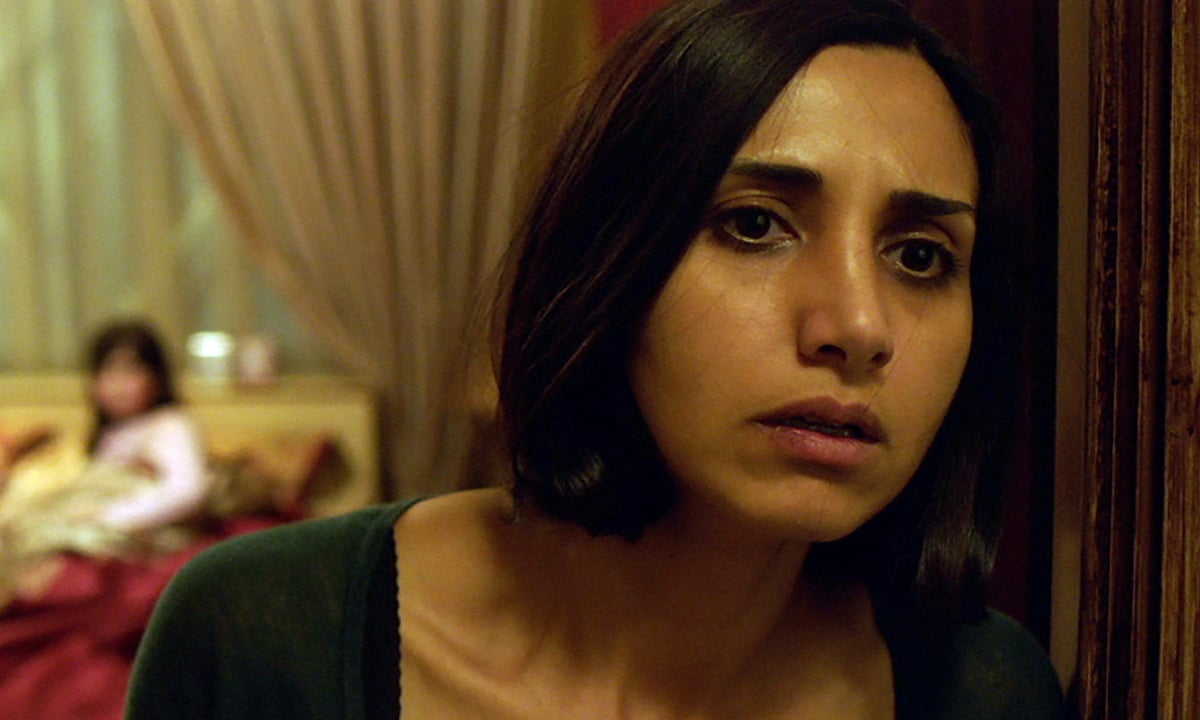 Like an Iranian take on The Babadook, writer-director Babak Anvari’s Under the Shadow is an emotionally direct and realistic horror story centered around a socially isolated mother and child who are terrorized by eerie supernatural events. Living in Tehran under Ayatollah Khomeini’s reign and during Iran’s long war with Iraq, Shideh (Narges Rashidi) feels the world closing in on her, a suffocation that comes to feel almost tactile through the specificity with which Anvari details her day to day. The paranormal happenings are very likely a combination of the mother’s hallucinations and the child’s way of making sense of the violence the mother perpetrates as her sanity ebbs and flows, but Anvari keeps things creepy in part by leaving open the possibility that there really may be something supernatural gripping his milieu. Elise Nakhnikian 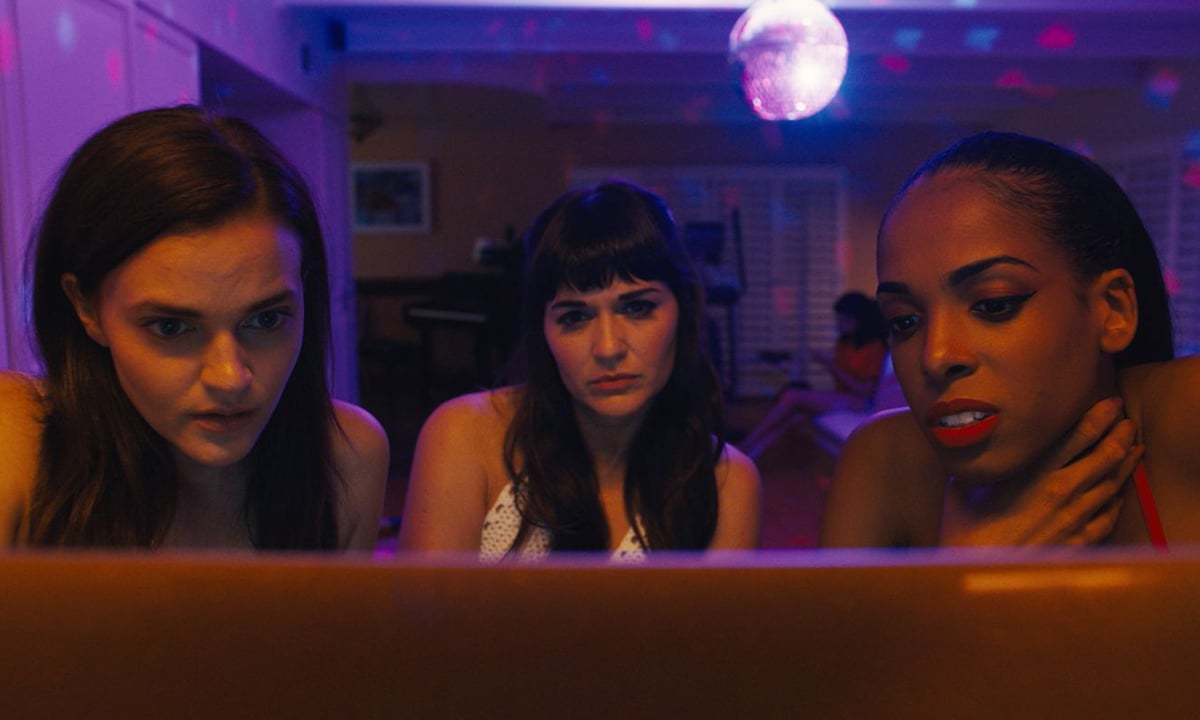 When Wilhelm Reich developed the concept of “sex economy” in 1931, he had in mind something like the way societal expectations or advertising may compel someone toward compulsory masturbation. Almost 90 years later, compulsion is but one of an array of factors informing Cam, Daniel Goldhaber’s lithely satirical and startling take on the present state of online sex work. Based on screenwriter Isa Mazzei’s own experiences as a cam model, the film is neither plainly sex positive nor outright cautionary in its depiction of Alice (Madeline Brewer), an up-and-coming streamer whose account is hacked and stolen by someone appearing to be her doppelgänger. Even as Cam gives new meaning to “ghosting” when Alice watches “herself” online, the film’s strengths come from an intimate familiarity with the anxieties that accompany a life predicated on thriving in a gig economy still owned and operated by impenetrable customer service mechanisms and corporate channels of older, sweaty white men. Cam is also one of the first American films to grapple with the realities of being doxed to family and friends, further demonstrating its primary acumen as a check on the social pulse of a particular strain of U.S. conservatism that continues to think about and patrol sex work, and those who participate in it, in even pre-Reichian terms. Clayton Dillard 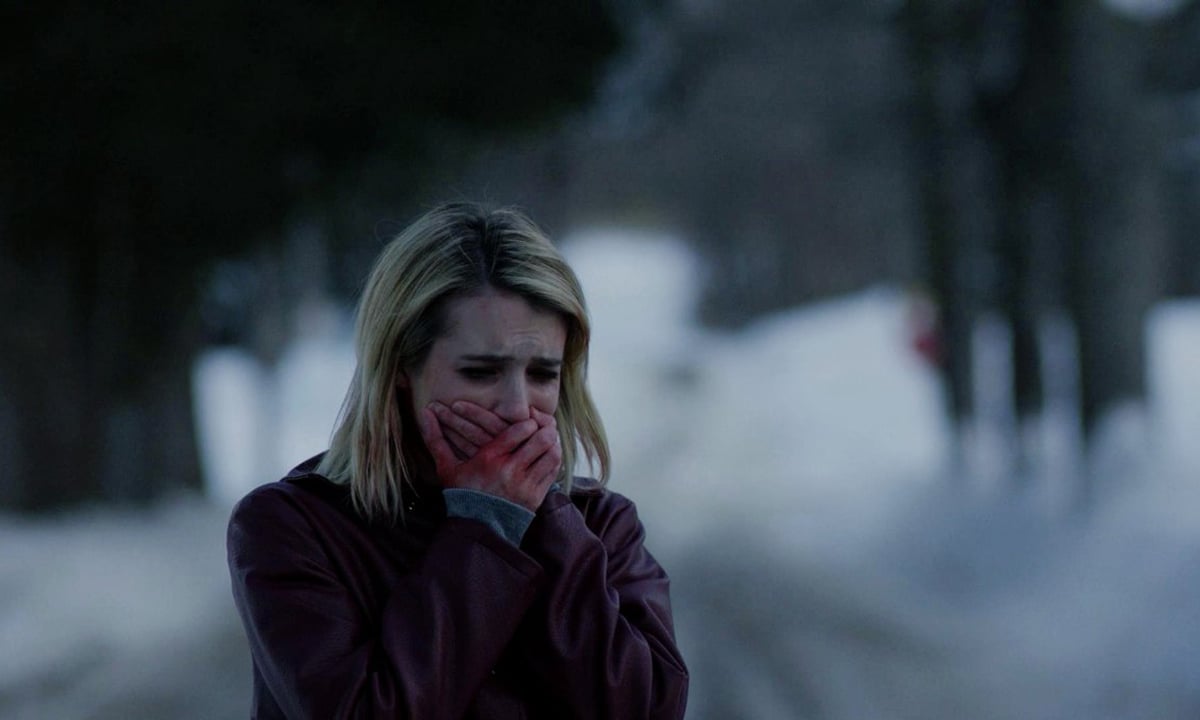 The Blackcoat’s Daughter has a sad, macabre integrity. Kiernan Shipka, Lucy Boynton, Emma Roberts, Lauren Holly, and James Remar are poignant in their minimalist roles, and writer-director Oz Perkins arranges their characters in a cleverly constructed narrative prism that simultaneously dramatizes violence and its aftermath in an endless chain reaction of perpetual cause and effect. And the carnage, when it arrives, is staged with an aura of guttural bitterness that refuses to give gore-hounds their jollies, elaborating, instead, on the desolation of the characters committing the acts. When the demons appear in the film, and in terrifyingly fleeting glimpses, Perkins understands them to spring from the deepest chasms of human despair. Chuck Bowen 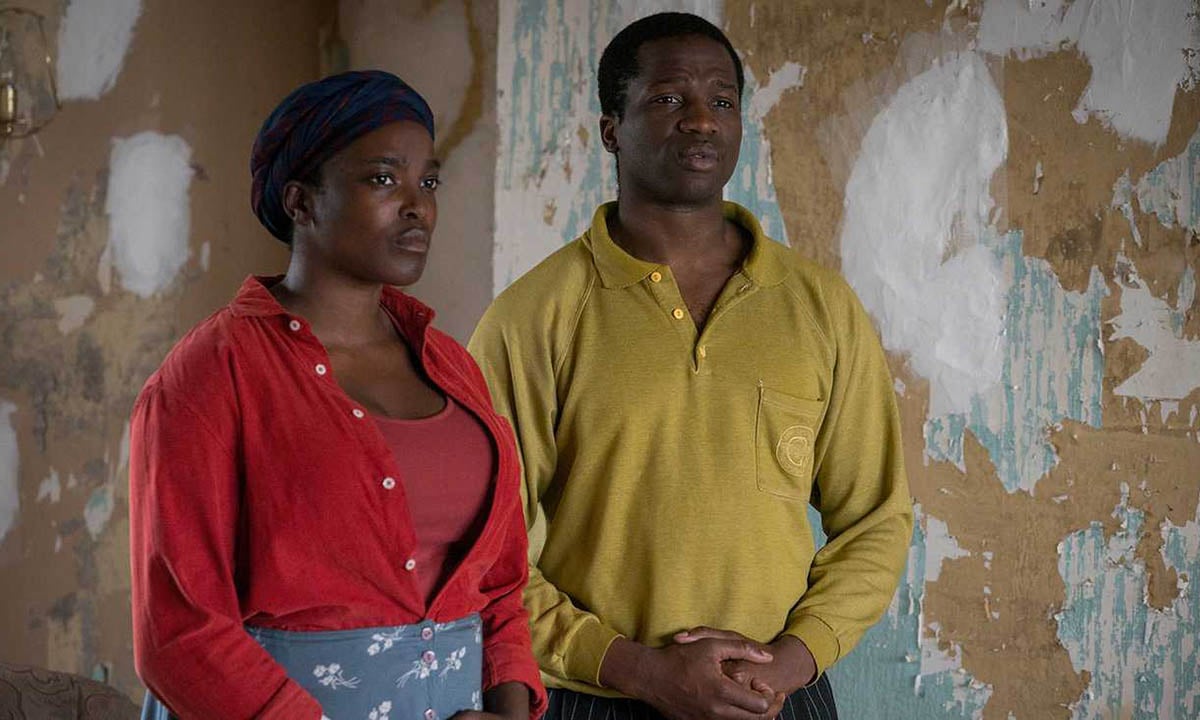 In writer-director Remi Weekes’s debut feature, His House, the unresolved trauma that strips away at an immigrant family’s defenses is horrifyingly manifested when they finally move into their designated low-income housing, and struggle to navigate a foreign culture that insists on assimilation. Bol (Sope Dirisu) is desperate to fit in, ensuring the immigration bureau that he and his family are good people and telling his wife that, in their new surroundings, they’re “born again.” But his wife, Rial (Wunmi Mosaku), doesn’t share his eagerness, as her experiences in England have been almost entirely unpleasant, from the indifference and condescension of their smarmy, burnt-out case worker, Mark (Matt Smith), to the outright xenophobic, such as when three black neighborhood kids mock her and tell her to go back to Africa. As Bol and Rial contend with their adversities, their home becomes an increasingly dangerous battleground in which they’re forced to wrestle with their inner demons and find ways to adapt without fundamentally changing who they are. This house, with its porous walls and ragged, peeling wallpaper, is eerily symbolic of its new inhabitants’ damaged psyches, their grief and guilt manifesting as ghosts—most chillingly in the form of zombified migrants who died during the perilous crossing to England that opens the film. Derek Smith 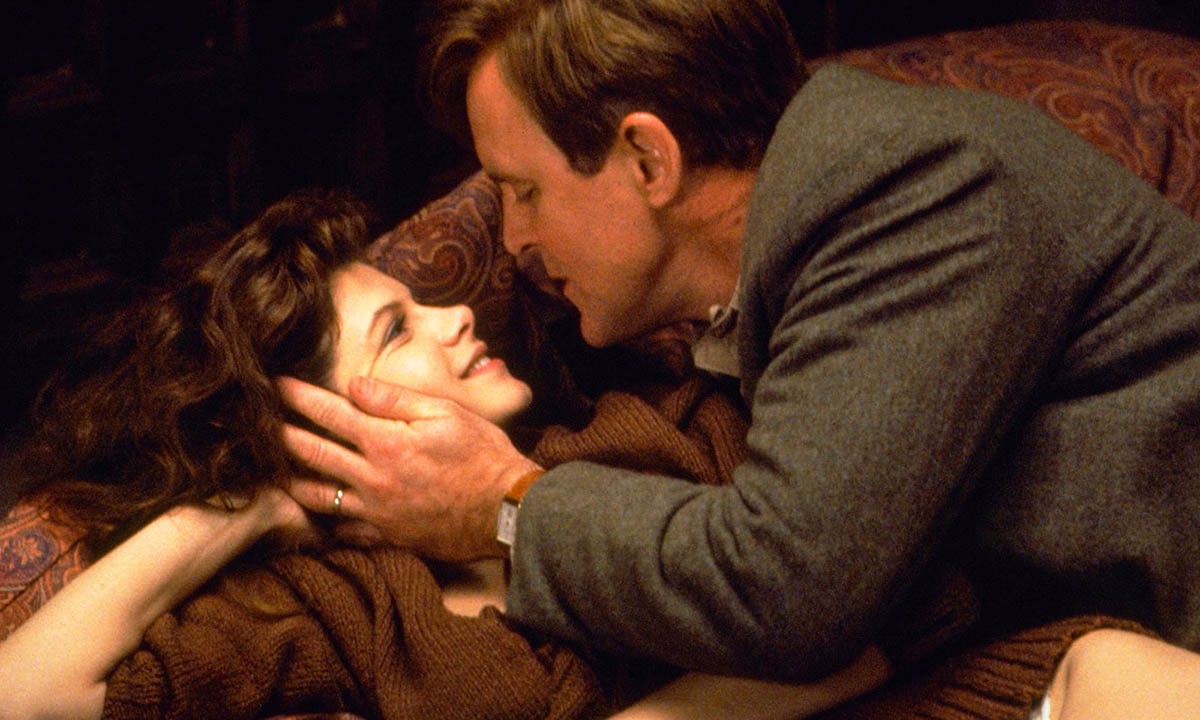 Rather than attempt to stay way ahead of the audience, Brian De Palma’s thrillers are usually one step aside you—the better to lull you into admiring the scenery before guiding you smack into the seedy part of town. With 1992’s Raising Cain, a truly nutzoid psychological mind-fuck in which the experience of trying to pin down where reality stops and dream states begin makes John Lithgow’s crippling schizophrenia look like an attractive alternative, De Palma hands you a map to an entirely different city. Dressed to Kill, in comparison, is his greatest triumph of fastidiousness—a tight, tense, well-oiled calliope of suspense. The 1980 film’s jolts don’t stem from the plot taking unexpected detours, but, rather, grow from one’s slow-dawning realization that De Palma is so talented he can make a film about mistaken and concealed identities without a single shred of doubt over who’s tailing who and you’re still enthralled, grooving on the pleasure of technique. Eric Henderson 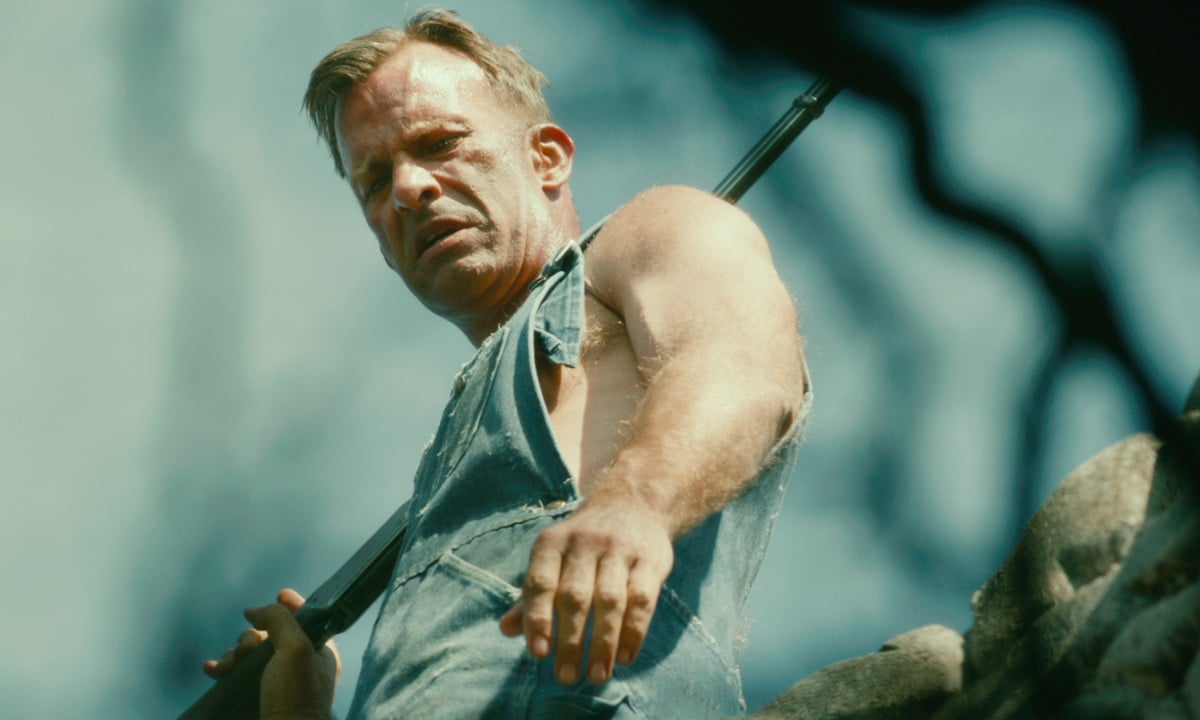 In 1922, Wilfred James (Thomas Jane) initially scans as a broadly brutish characterization given by an actor looking to disrupt his handsomely aloof image, following a cinematic tradition of expressively filthy, monosyllabic and flamboyantly antisocial characters such as Daniel Plainview and Karl Childers. Though Jane’s dramatization of rage is haunting and shrewdly comical in its overt and ultimately moving über-manliness. The casual violence of Wilfred’s physicality is subtly calibrated, particularly the tension in his muscled back as he drinks lemonade on the porch after a hard day of murder. Complementing Jane’s portrait of coiled wrath, Molly Parker physicalizes the fear that informs every minute wrinkle of Arlette’s relationship with her husband, which the character attempts to paper over with bravado, inadvertently sealing her doom. Arlette is one of countless women who’re damned if they do and if they don’t, yet somehow the men are able to rationalize themselves as the victims. 1922 informs Stephen King’s pulp feminism with primordial, biblically ugly force. Bowen 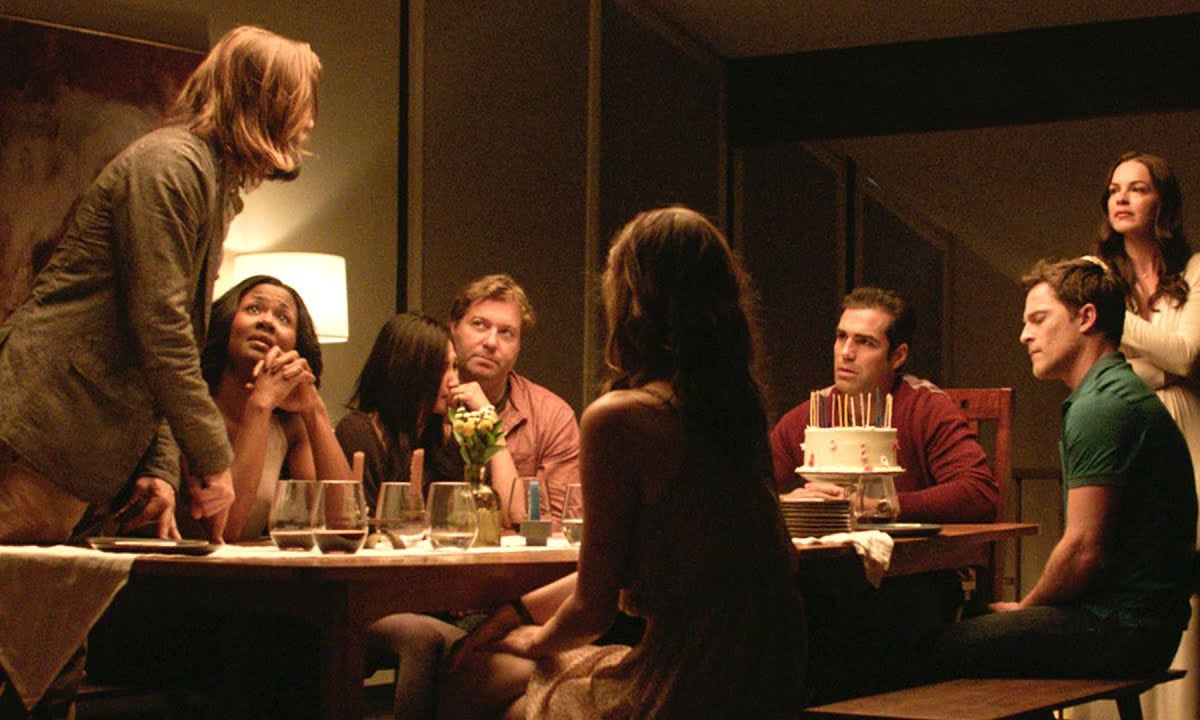 The Invitation filters each sinister development through Will’s (Logan Marshall-Green) unreliable perspective, to the point that one friend’s failure to turn up at a lavish dinner, or another’s precipitous departure, appear as if submerged, changing with each shift in the emotional current. Returning to the rambling house where he and Eden once lived for the first time since the death of their son, Will finds himself inundated anew by his heartache, and the film, which otherwise hews to crisp, clean realism, is run through with these painful stabs of memory. Eden slashes her wrists in the kitchen sink, the sounds of children playing emanate from the empty yard, inane talk of the Internet’s funny cats and penguins becomes white noise against Will’s screaming: The question of whether or not to trust his sense of foreboding is perhaps not so open as director Karyn Kusama and company might wish, but against the terrors of continuing on after losing a child, the issue of narrative suspense is almost immaterial. Matt Brennan 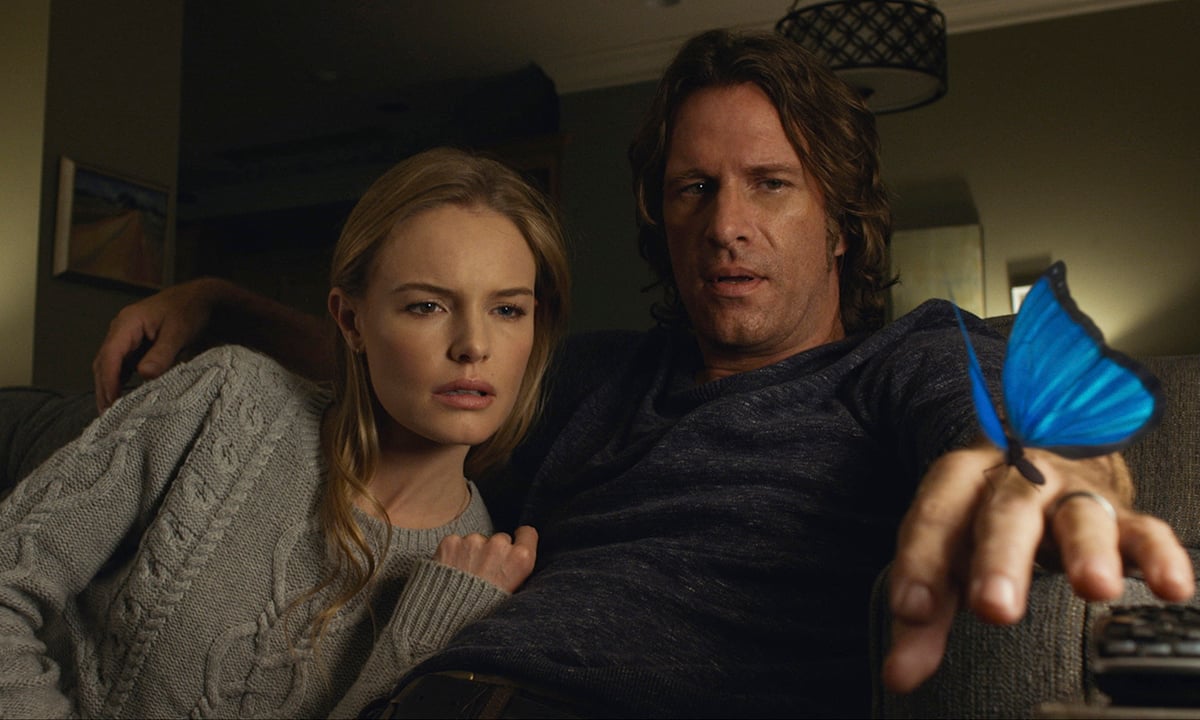 Director Mike Flanagan’s Before I Wake hints—in flashes—at a remarkably cruel psychodrama, physicalizing one of the worst and most common fears that orphans share: that they’re awful and unlovable, and therefore undeserving of parents. This fear is similar to the terror that parents have of inadvertently destroying or disappointing their children, and Flanagan unites these anxieties with a ghoulishly inventive plot turn that he doesn’t fully explore. Flanagan is deeply invested in Cody’s (Jacob Tremblay) welfare, to the point of rigidly signifying the various manifestations of the boy’s nightmares, pigeonholing irrationality into a rational framework so as to justify a moving yet literal-minded finale. Chaos could’ve opened Before I Wake up, allowing it to breathe, though Flanagan’s beautiful and empathetic film cannot be taken for granted. Bowen 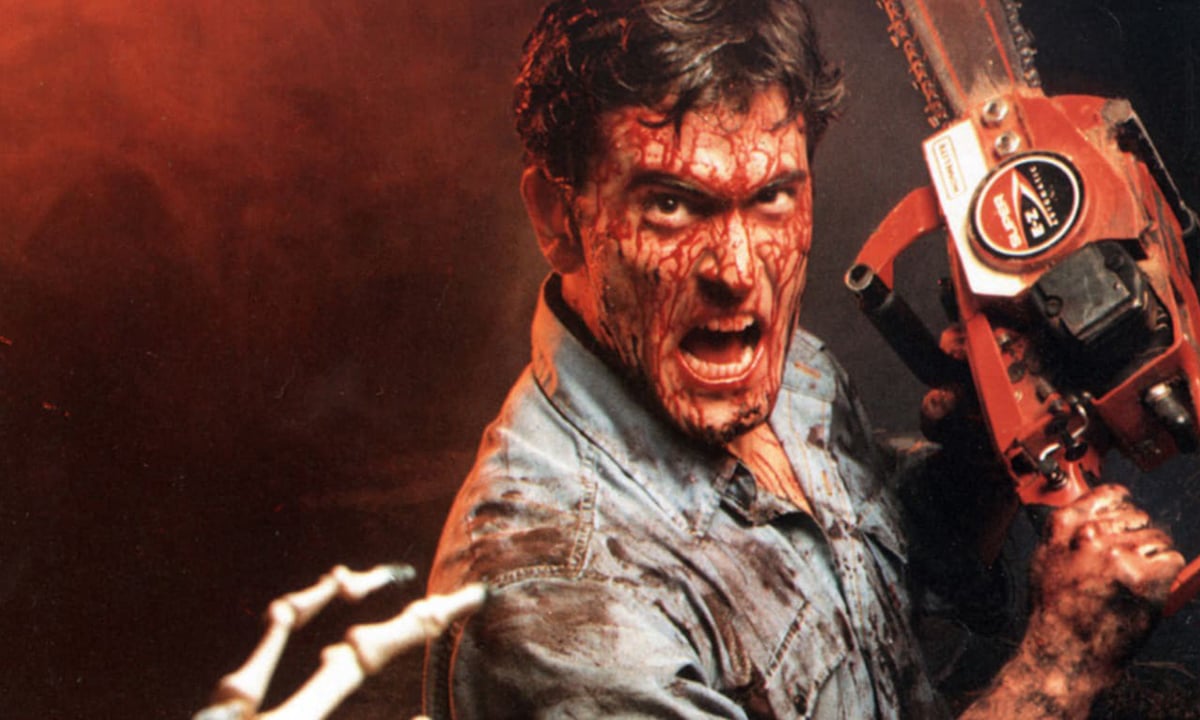 The Evil Dead still feels like the punchiest horror flick this side of a Dario Argento giallo. Sam Raimi relentlessly fashions the film’s first half as a creepy-crawly sweat chamber with evil seemingly taking the form of an omniscient, roaming camera, gleefully poking fun at his five protagonists along the way. Despite the signs—the difficult-to-start vehicle, the fallen bridge—no one else believes the woods are alive. Ash (Bruce Campbell), horrordom’s most memorable wuss, and his girlfriend, Linda (Betsy Baker), share an intimate, peek-a-boo moment in which he gives her a necklace, and when he’s later forced to kill her, Raimi takes great joy in referencing this coquettish exchange of affection. Now infamous for its over-the-top gore and cheesy effects sequences, The Evil Dead is most impressive for Raimi’s unnerving wide angle work and his uncanny, almost unreal ability to suggest the presence of intangible evil via distant headlights, bleeding light sockets, and, in the film’s most awesome set piece, a simple game of cards. Ed Gonzalez 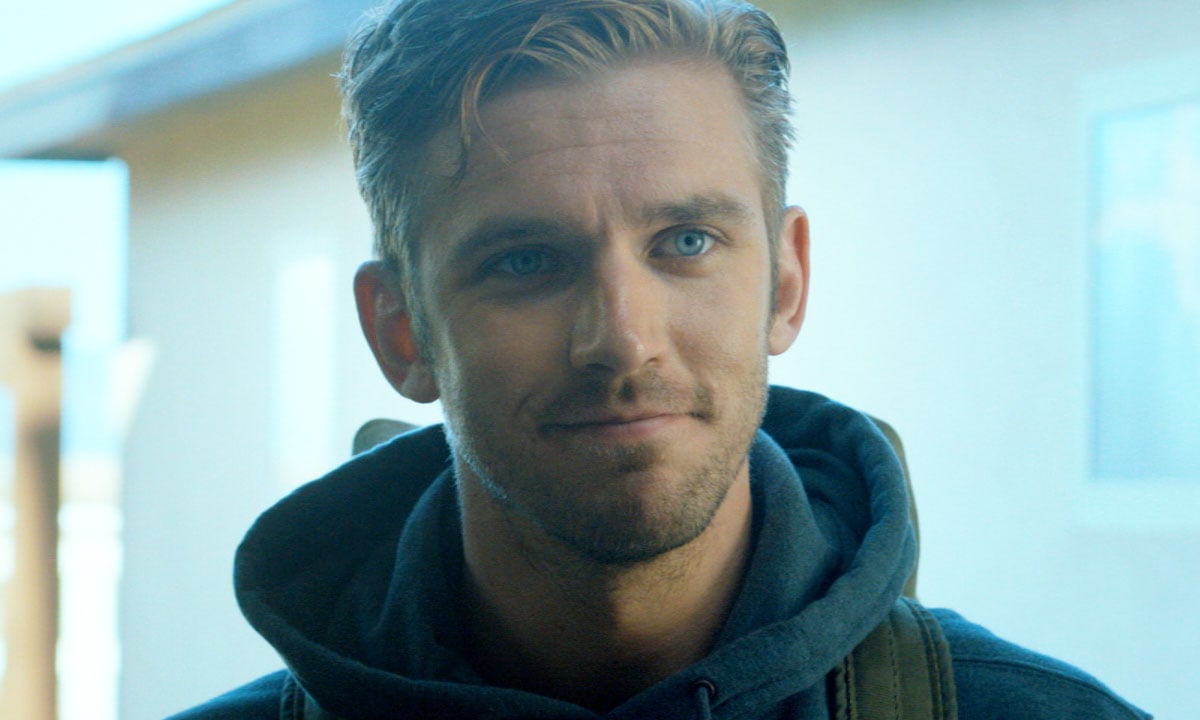 Review: Film About a Father Who Walks Down a Recorded Memory Lane