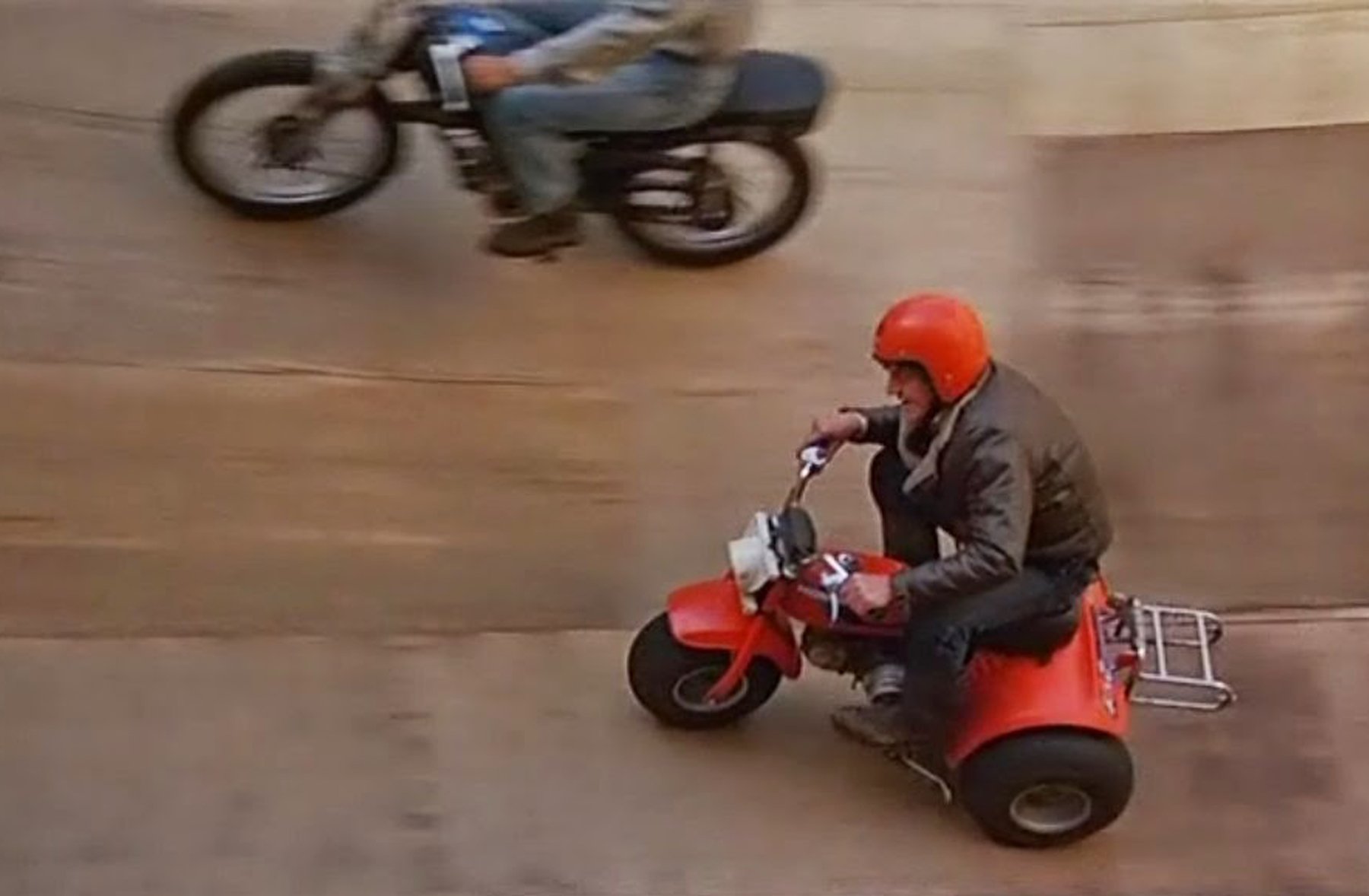 Peter Ormrod’s only feature film is so modest as to seem designed to be stumbled upon rather than actively sought out. Judging from its longstanding out-of-print status, it thoroughly succeeded. Released in the US thanks to Jonathan Demme’s backing, Eat the Peach came a bit too early to partake in a streak of spectacular successes that Irish movies were just about to enjoy, courtesy of My Left Foot, The Commitments, In the Name of the Father, and their like. Still, if you only manage to find it on a worn-down VHS, the film can make you dizzy with its quiet riches.

Unraveling in wide, ashen-brown Irish plains, the story starts with the main character, Vinnie (Stephen Brennan), losing his job in a local computer factory run by Japanese owners. Unemployed and forlorn, Vinnie hangs out aimlessly with his brother-in-law Arthur (Eamon Morrissey) until he’s struck with a vision: a VCR left behind in a bar by one of the Japanese businessmen is playing the 1964 movie Roustabout, in which Elvis Presley’s daredevil drives his motorcycle up the Wall of Death: a wooden cylinder enabling the driver to make horizontal loops as if he was suspended in midair.

From now on, Vinnie’s life is devoted to erecting a Wall of Death all his own. He manages to pull those dear to him into the folly: the amiable Arthur follows immediately, while Vinnie’s wife Nora (Catherine Byrne) needs some coaxing. Vinnie envisions the Wall as a possible carnival sensation and in order to get the necessary funds he starts smuggling whiskey to Northern Ireland, using a variety of covers that provide much of the movie’s humor. With some advertising help provided by Boots (Niall Toibin), a local faux-American who fancies himself a big-time Yankee operator, the Wall gets finished, but (to put it mildly and in a spoiler-free manner) fails to bestow a lasting well-being onto its architect.

Both a stripped-down, frugal version of Field of Dreams and a Local Hero with a switch in perspective, Eat the Peach presents the provincial lives of its characters as simultaneously stifling and charmed. Everyone in the movie seems to be famished for some sort of big-scale endeavor. Bernadette O’Neill’s bar singer craves a career, Boots spins tall tales of his adventures over the Pond, while Vinnie guzzles Elvis-laced pop fantasies and turns them into a work of ramshackle centrifugal grandeur.

What propels the movie forward (or rather spins it around) is Vinnie’s quiet drive and Arthur;s steady support. It’s thanks to these qualities that the Wall of Death slowly rises. Built in the middle of infinite plains, it seems to be born out of Vinnie’s hunger of verticality: it looks like a crown bestowed upon an unlovely landscape by one man’s ability to dream. When used, the wooden cylinder pulsates along with the motorcycle making its loops—it is at those moments that it seems to have a life of its own. When Vinnie rides it, the Wall looks like its bulging wooden surface is about to release a slowly hatching bird.

The film is full of tiny touches and throwaway lines that make one laugh without sounding like intentional comedy (“I now declare this Wall of Death open for business,” says the priest in all sincerity just as he’s about to sprinkle some holy water onto the construction). Praised by Pauline Kael despite its technical deficiencies (“It’s the kind of movie in which you rather enjoy the shots’ not matching”), Eat the Peach avoids speeches and expository dialogue, treating its characters’ behavioral quirks as storytelling devices. Even though the sense of local politics and its corruption is very clear throughout the film, what matters most to Ormrod is not social critique, but rather a vision of a working-class hero determined to dream his silly dream no matter what. The movie suggests that the sillier the dream, the greater the dreamer.