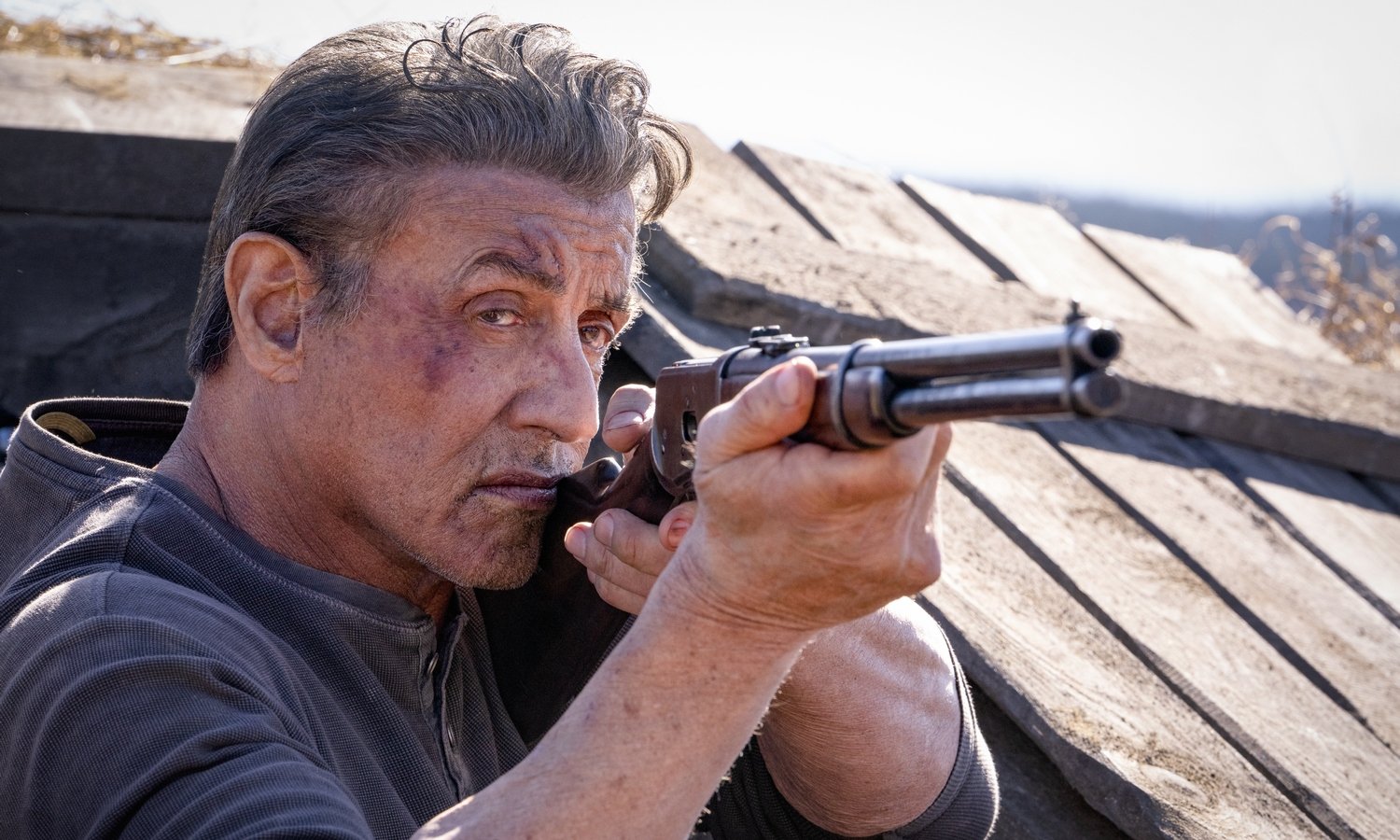 When we last saw battle-scarred Vietnam veteran John Rambo (Sylvester Stallone), he was walking toward the dusty homestead of the father, and the metaphorical American fatherland, that he left behind several decades prior. That was at the end of 2008’s Rambo, a film released early in the final year of George W. Bush’s presidency. Dubya’s war-mongering doctrine was well-complemented by this tale of a steroidal white savior getting savage with big bad Burmese rebels. Body-disintegrating bullets and longing bro-ish gazes said everything words couldn’t. Mission fuckin’ accomplished! It was completely offensive and totally awesome—as long as you could key in to the undercurrent of virile camp.

Give credit to Rambo: Last Blood, capably helmed by Adrian Grunberg, for tapping that gleefully repellent vein one (apparently) final time. Rambo is still on his dad’s ranch, though the old man has departed this mortal coil, leaving behind Maria (Adriana Barraza), who has worked the farm for decades, and Gabrielle (Yvette Monreal), a college-bound 17-year-old who Rambo treats like his own flesh and blood. Gabrielle has hopeful dreams of the future and loves riding horses with her “Uncle John.” But before she heads off to school, she wants to face the abusive father (Marco de la O), now living in Mexico, who abandoned her many years ago.

Mexico, full of what our current commander in chief might term “bad hombres,” is portrayed here as a cesspool of drug addicts, sex traffickers, and violent hedonists, in addition to a single crusading journalist, Carmen Delgado (Paz Vega), because some Mexicans, we assume, are good people. Before we’ve hit the 15-minute mark (the film itself runs an exploitation-flick-friendly 89 minutes), Gabrielle finds herself in the clutches of two evil pimps, brothers Victor and Hugo Martinez (Óscar Jaenada and Sergio Peris-Mencheta), who oversee a back-alley prostitution empire. Time, then, for John Rambo to go all Taken on these mofos.

That he does, though you may be surprised to learn that the kidnapping plot is resolved by the halfway point, after which Last Blood becomes a hilariously gore-splattered variant on Home Alone, with Rambo using all of his survivalist skills to exact revenge on the brothers and their innumerable disposable henchmen. You better believe his iconic compound bow is an integral part of the plan, though his even more characteristic red headband and greasy/stringy Fabio mullet are, sadly, lost to time. In a film filled with all manner of elating kills (sawed-off shots to the head, razor-sharp machetes to the ankles and throat), nothing is more exuberantly cold-blooded than Rambo blasting the Doors’s “Five to One” as a diversionary tactic.

The Looney Tunes nature of the murder spree tempers much of the ideological offense of the screenplay, though the Rambo films have always been incoherent texts—propagandistically gung-ho in some moments, peculiarly upstart and rebellious in others. There’s a scene here in which Rambo drives up to a border fence on the Mexican side, briefly glances at the English sign warning him off, then floors the accelerator and crashes through the barbed wire. Boundaries mean nothing to Rambo; after this scene, he shuttles between the U.S. and Mexico as if he were popping down to the local grocery store. Though it’s only right to ponder whether lone-wolf actions such as this are more on the side of righteous or regressive fury.

The latter seems more likely, in no small part because of how often Rambo has been co-opted by hawkish powers-that-be. After seeing 1985’s Rambo: First Blood Part II, the second film in the series in which Rambo rescues American POWs in Vietnam, Ronald Reagan was heard to remark, “I know what to do the next time this happens.” And Reagan is alluded to in both the fourth and fifth film via the initials of the name on the family farm mailbox: R. Rambo.

Yet there’s still the matter of Stallone himself, who at 72-years-old has become even more of a gloriously sinewy sight gag, one that tends to cut against any serious ambitions or ideas that these films, this one in particular, might harbor. The degree to which he’s aware of his own absurdity is debatable; never forget that he boasts a 160 Mensa I.Q., so the joke could very well be on us. Intentional or not, he consistently courts the ridiculous to touch the sublime, and that’s certainly true in Last Blood, which he stalks through like Frankenstein’s monster.

There’s a lizard-brain thrill to his single-mindedness, and a stab, such as it is, at emotional complexity when Rambo’s killing spree culminates in a literally heartrending gesture. This is followed by a scene set on a sun-dappled country porch that draws equally on the multifaceted mytho-poeticism of John Ford and the jingoistic stupidity of John Wayne circa The Green Berets. That neither sensibility fully overwhelms the other is testament to the Rambo series’s consistently wandering convictions—a muddled ethos worn as proudly as a Purple Heart.

Review: First Love Is a Well-Oiled Genre Machine, As Bloody As It Is Haunting