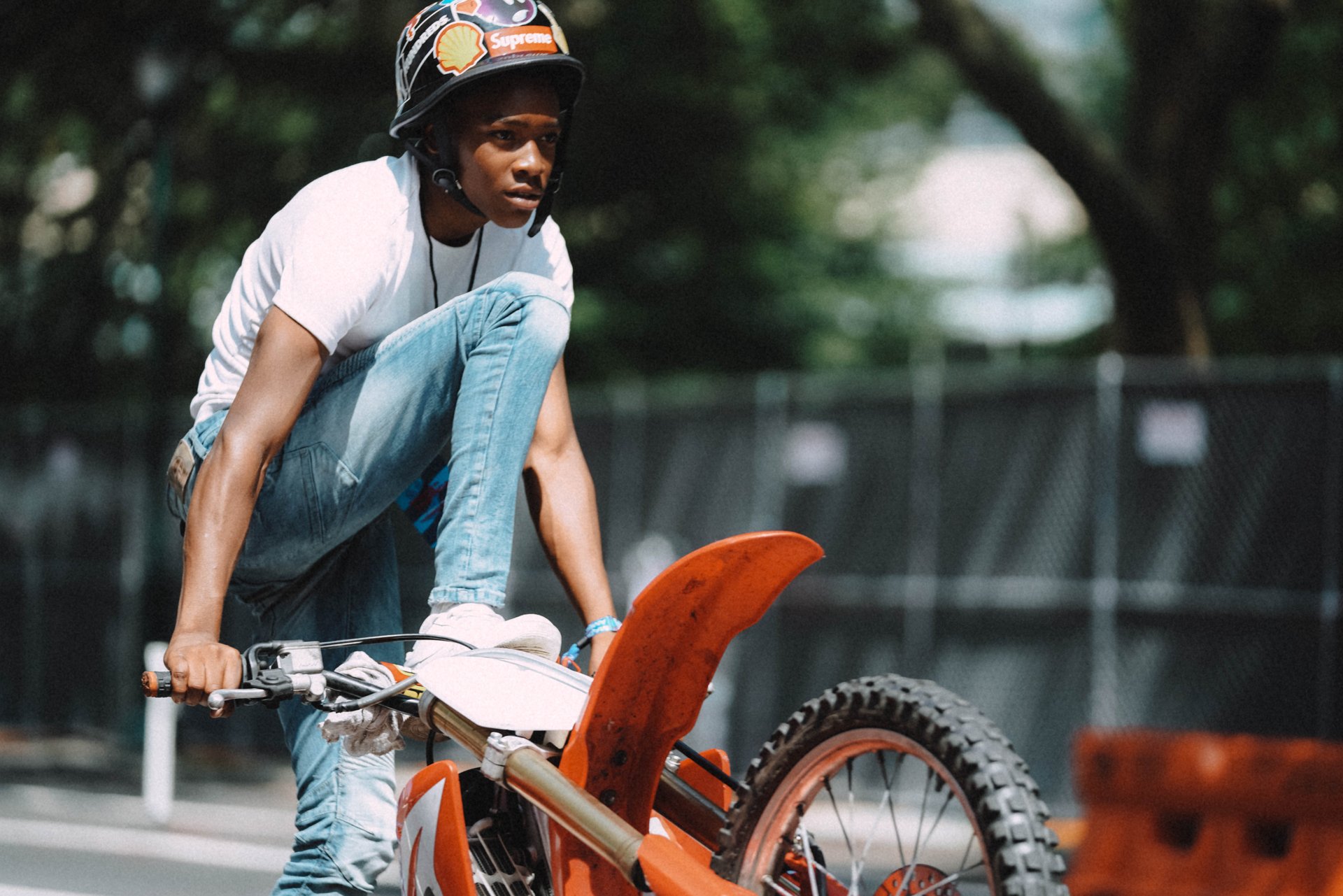 Angel Manuel Soto’s coming-of-age film Charm City Kings is based on Lofty Nathan’s chaotic, immersive 2013 documentary 12 O’Clock Boys. Set in a poor West Baltimore neighborhood of beaten-up rowhouses, the film follows Mouse (Jahi Di’Allo Winston), a 14-year-old who’s tired of lugging around the painful memory of his older brother’s death in a police chase years earlier. Blocking out all the entreaties from his mother (Teyonah Parris) and a pair of diametrically opposed father figures to keep on the straight and narrow path, Mouse yearns for the freedom he sees in the exuberant displays of gravity-defying tricks put on by the neighborhood’s dirt bikers with whom his brother used to ride.

The story, though, starts off in somewhat less serious territory, occupied mostly with the summer-time shenanigans of Mouse and his two best friends, Lamont (Donielle T. Hansley Jr.) and SweartaGod (Kezii Curtis). There’s an innocence to some of these early scenes, with the boys cracking on each other and rushing out to try and impress the new girl on the block, Nikki (Chandler DuPont), that feels both organic and deliberate. While Soto and screenwriter Sherman Payne aren’t hiding any of the difficulties faced by local residents—drug dealers are pointed out at one point, the police are a constant presence—they don’t allow them to crowd out the characters’ ability to have lives not solely defined by poverty.

Things take a darker turn once Mouse’s obsession with getting his own bike and showboating like his brother leads him into the orbit of the Midnight Clique biker crew. Mouse’s embrace of the lifestyle brings him to the attention of legendary biker Blax (Meek Mill), a reformed ex-con who repairs bikes in a showcase garage that to Mouse’s bugged-out eyes may as well be Tony Stark’s gadget-strewn hideout. Blax tries to encourage Mouse’s gearhead enthusiasms while simultaneously keeping him away from the rest of the Midnight Clique riders, who seem to make their livelihood couriering drugs as well as stealing and reselling bikes. At the same time, Detective Rivers (William Catlett), a self-appointed mentor who’s taken an interest in Mouse’s future, is giving the same advice as Blax with as little ultimate impact.

Though Soto’s direction is mostly unexceptional, there’s a real sense of lightness and freedom to some of the early scenes in which we can see the wonder in Mouse’s eyes as he watches the bikers popping wheelies. The bikes’ high-pitched whine is a siren call promising escape. One segment where the bikers and onlookers crowd together for an impromptu street party and display of tricks draws on a long lineage stretching from Rebel Without a Cause to The Fast and the Furious (and if wheelie-popping dirt bikes are not incorporated into the Fast & Furious series at some point, then its producers are failing at their job).

Sadly, that giddy abandon falls away as Charm City Kings moves toward a conclusion so overloaded with generic life lessons that it loses the site-specific appeal of its story. Payne’s script looks for an emotional payoff by continually upping the stakes of Mouse’s adolescent impatience and self-destructive short-term thinking. But the further the film moves away from the kids knocking around the neighborhood and toward Mouse and his friends getting drawn into the criminal orbit (those bikes cost money after all), the more rote it begins to feel.

There are some similarities here to Concrete Cowboy, another story about a wayward boy trying to find himself in the codes of manhood embedded in a real-life inner-city subculture. But while Ricky Staub’s film rises above the off-the-shelf plotting with a clutch of standout performances, Charm City Kings never generates the kind of engagement with its characters necessary to help viewers get past the predictable nature of their dilemmas.

Review: The Forty-Year-Old Version Is a Sardonic Look at Underachievement

Review: The Wolf of Snow Hollow Is a Swan Song Worthy of Robert Forster