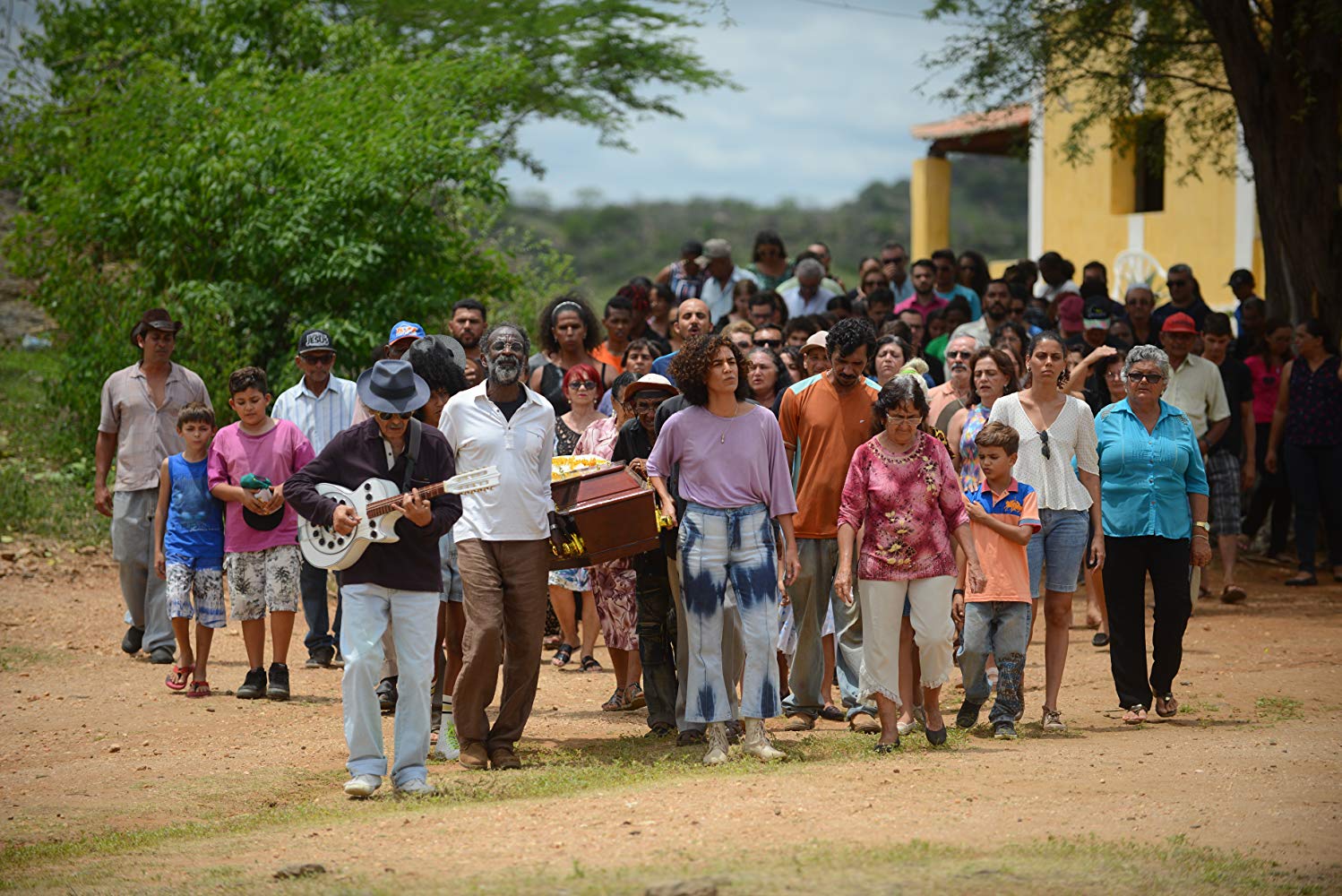 Kleber Mendonça Filho and co-director Juliano Donnelles’s Bacurau assembles a vibrant and eclectic collage of reference points. It’s a wild neo-western that pulls into its orbit UFO-shaped drones, elaborate folklore, limb-flaying and head-exploding gore, and Udo Kier as a villain who shouts in a mockingly high-pitched voice, “Hell no!” This sci fi-inflected sociopolitical satire gleefully skirts camp, co-opting John Carpenter’s favored font for its credits, leaning hard into a chintzy electronic score (which includes “Night,” a Carpenter original), and making frequent use of the antiquated wipe transition.

An establishing shot of Earth is set to Brazilian singer Gal Costa’s celestial ballad “Nao Identificado,” and the song’s refrain—“I will write a love song/To be recorded in space”—appropriately casts Bacurau as both an affectionate ode to Brazil’s people and a wildly fantastical interpretation of their struggles. The Bacurau of the film’s title is a fictional town in Brazil’s northeastern interior, depicted here at some point in the not-too-distant future. The citizens live in a relatively undisturbed harmony—until Bacuaru is literally wiped off the map (GPS no longer can locate the backwater), local cell service is jammed, and the people find themselves hunted, A Dangerous Game-style, by gringo infiltrators.

Mendonça Filho is one of contemporary Brazilian cinema’s most sharply political filmmakers, and Bacurau solidifies his commitment to rebuking Brazil’s current administration and its willful erasure of the country’s culture and heritage. The filmmaker’s 2016 feature Aquarius centered on an aging woman’s fight against relentless land developers to keep the apartment she’s lived in for decades, and Bacurau essentially reconfigures that narrative as a raucous genre film as an entire town bands together to protect its terrain from trespassers.

Bacurau’s slow-burn first hour establishes the filmmakers’ humanism through the care they take to define the social reality of a close-knit, salt-of-the-earth community, one in which the local pimp, and sex work in general, is treated seemingly with as much respect as the town’s doctor, Domingas (Sônia Braga). It’s the values of this town, then, that are at stake when its inhabitants start getting picked off by murderous white devils. The filmmakers insinuate as much, depicting life in Bacurau as an almost utopian communal existence where people in various states of undress are completely at ease in each other’s company.

One scene is especially powerful for the way it seeks to subvert our sense of the bodies displayed on screen. The sight of an old naked man tending to his garden is intended to invite a certain type of gut reaction, which the filmmakers swiftly flip on its head when rifle-wielding hunters descend on him after he enters his home and they set the straw of its thatched roof on fire. Then, our sympathies are stirred again as the man and his wife, also naked, lay waste to the intruders, in a spectacularly bloody scene that’s punctuated by a shot of the couple inside the home, standing side by side in protective stances with rifles in hand.

The film’s second hour is full of moments as blunt and impactful as the delirious gauntlet thrown down at the end of Aquarius, culminating in a showdown set in an eerily deserted Bacurau during which the whole town mounts a sneak attack on the outsiders. It’s a sequence that unabashedly situates the film in the tradition of the western, while also bringing to mind the hijinks of Home Alone through the deployment of various booby traps. Clever and humorous cues like the faded silhouette of firearms adorning a museum wall signaling to a spooked hunter that he may have underestimated his prey more than validate Mendonça Filho’s longtime production designer, Donnelles, being credited as a co-director here. And the elaborately conceived set pieces that the two come up with ensure that Bacurau’s bona fides as a genre film are at least as assured as its facility with sociopolitical satire.

Each of Mendonça Filho’s films to date have found the filmmaker trying out vastly different aesthetics, even as they’ve staked out roughly the same narratological territory, and their specific identifying features have also been their limitation: Neighboring Sounds, about a town transformed into a surveillance state by a private security firm, stays stuck in its abstract and impressionistic art-film register, Aquarius keeps to its standard three-act drama tract, and Bacurau is, at its base, a broad genre exercise. And that broadness extends to this film’s critique, as the white hunters are all cartoons of first-world hedonism, while the Bacurauians are less defined as individuals than they are as a collective.

Still, Bacuaru succeeds as a stingingly personal missive about Brazil’s increasingly right-wing tendencies, as evidenced by a certain prominently placed lesbian relationship (sure to make the notoriously homophobic Jair Bolsonaro squirm) and the character of Tony Jr. (Thardelly Lima), a sleazeball politician who pretends to have nothing to do with the assault on Bacurau, even though he was the one who sold its people to the foreigners for blood sport. From the implications of complicity in committing atrocity to the hunters’ flagrant misogyny and orgiastic love of guns, Bacurau fervently represents the degeneracy of Brazil’s present political identity. But it’s also a crowd-pleaser that celebrates lovemaking, body positivity, and liberal use of psychotropic drugs, a plenty righteous message for a violent world.

Review: The Last Black Man in San Francisco Is an Offbeat Elegy for the Past

Review: The Raft Captures the Feeling of Life Under a Curious Dictatorship