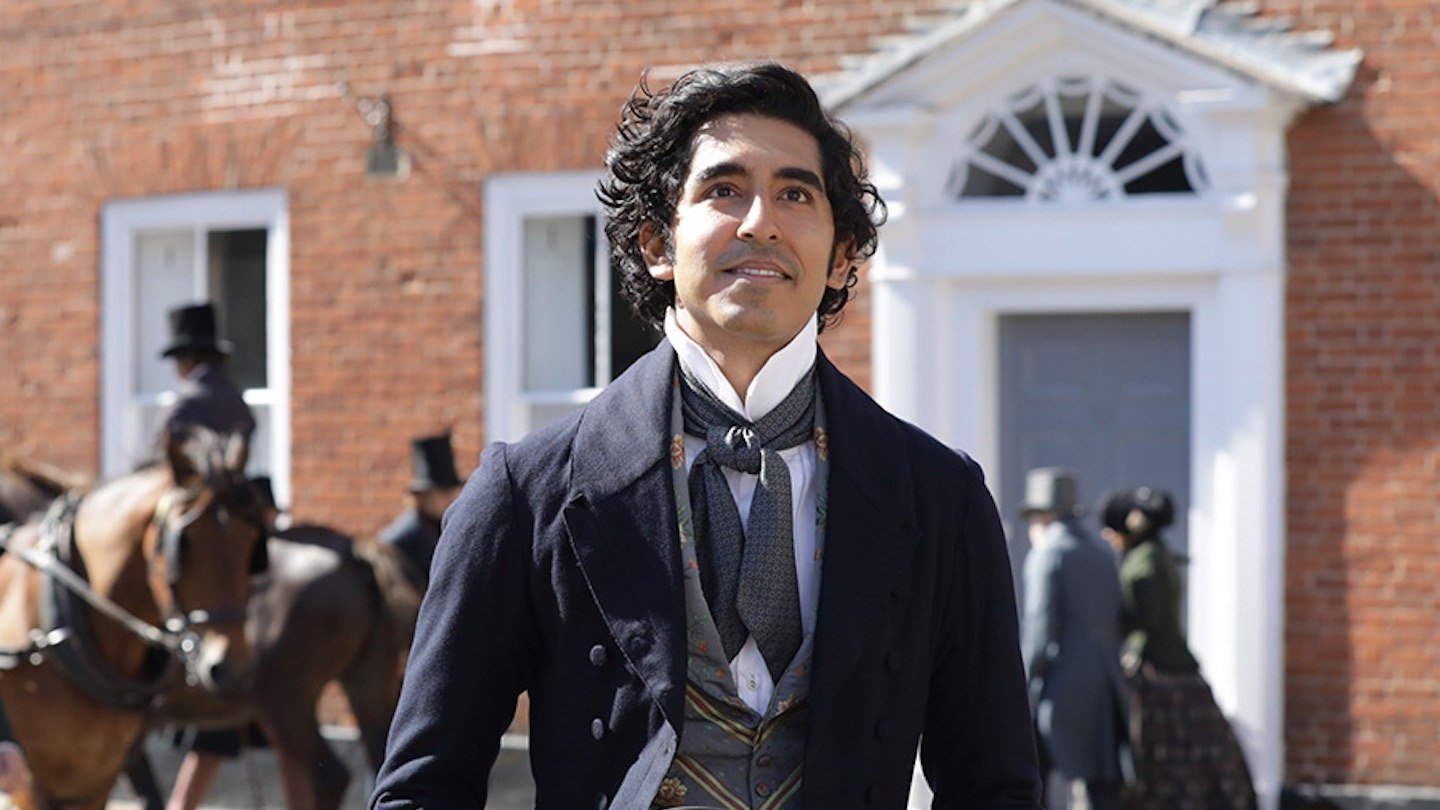 With The Personal History of David Copperfield, Armando Iannucci—the Scottish satirist behind such profanity- and cynicism-laden comedies as The Thick of It, In the Loop, and The Death of Stalin—shows a much gentler, if no less audacious, side. After a serene prologue set in a packed theater where the adult David Copperfield (Dev Patel), standing at a lectern as if he were Spalding Gray in the 19th century, speaks the famous opening lines of Charles Dickens’s beloved novel, “Whether I shall turn out to be the hero of my own life…,” this adaptation stomps on the accelerator and barely lets up.

David’s existence is told episodically—appropriate given the source material—and at a whimsically breakneck pace that can be off-putting. But at almost every moment that you might want to tell Iannucci to ease up, he’ll suddenly hit you with an inspired bit of business, like the introduction of David’s great-aunt, Betsey Trotwood (Tilda Swinton), her face pressed up against a window glass, nostrils flared, so that she becomes a caricature. Grotesquerie becomes Dickens, and Iannucci, who co-adapted the novel with Simon Blackwell, has assembled a formidable ensemble to delight in and distill all the whirlwind freakishness.

It’s at the level of casting that the film is most original, since Iannucci has taken a color-blind approach: an Indian David, a Hispanic Agnes (Rosalind Eleazar), a Chinese Mr. Wickfield (Benedict Wong), and so on. Racial distinctions are further clouded by the fact that, say, the black Mrs. Steerforth (Nikki Amuka-Bird) can be mother to a very white son (Aneurin Barnard) with nary a Victorian-era eyebrow raised. This intentional anachronism is as effective in its way as Iannucci’s decision in The Death of Stalin to cast hysterically incongruous people in the main roles, from a man-child cockney as the eponymous Russian despot to a boy from Brooklyn with the last name Buscemi as the power-hungry Khrushchev. There’s something especially powerful about how the breezy David Copperfield goes out of time. The oppressive fantasy that’s racism is elided and exploded, to the point that it draws that much more attention to Dickens’s timeless themes of class condescension and socioeconomic struggle.

The downside is that the degree to which those themes resonate varies from scene to scene and from character to character. They’re barely apparent in any sequence featuring Iannucci regular Peter Capaldi, who plays the creditor-hounded Mr. Micawber much too broadly. His grating stylings are often neutralized by the speed of the narrative (he feels like he’s barely in the film), and Capaldi in no way holds a candle to the best on-screen Micawber, played by the inimitable W.C. Fields in the 1935 George Cukor adaptation. The actor does, however, brilliantly deliver the film’s killer penultimate line about the fiscal potential of a writing career, a little bit of his merciless Malcolm Tucker from The Thick of It seeping through.

Also rushed is the tragic subplot involving Ham (Anthony Welsh), one of the quirky residents of a boat repurposed as an eccentric seaside home, and his not-so-devoted-as-she-seems fiancée, Emily (Aimée Kelly), which is unfortunate given its place as the film’s emotional climax. Much more in sync with the novel’s tempo and subtext are the scenes featuring Mr. Dick (Hugh Laurie), perpetually burdened by thoughts of the decapitated King Charles I, and those spotlighting David’s flighty first beloved, Dora (Morfydd Clark), whose awful fate in the novel is literally rewritten on screen with equal parts absurdity and poignance.

A standout, unsurprisingly, is Ben Whishaw as the status-obsessed Uriah Heep, who starts out as a pure cartoon—sneaking about rooms in crouched, irritatingly quizzical fashion—but is later allowed to forcefully and cogently declaim his ire at anyone, our protagonist included, who would dare demean him for the hand he’s been dealt. This brings us to Patel, whose considerable surface charms as David are nonetheless weakly one-note. This doesn’t prove to be too much of a detriment, interestingly, since David is finally treated as more of a blank slate upon which Iannucci places his own obsessions with words and the creative process.

David writes down his fragmented thoughts over the course of the film, many of them colorful descriptions of all the people he meets, all of which will eventually be collated and collected into the very tale we’re watching. It’s not hard to parallel David/Dickens’s head-spinningly intricate descriptors with Iannucci’s own prodding, poetically vulgar rhetoric. Of the villainous Miss Murdstone (beautifully, petrifyingly played here by Gwendoline Christie), Dickens writes, and the film references, her “heavy eyebrows, nearly meeting over her large nose, as if, being disabled by the wrongs of her sex from wearing whiskers, she had carried them to that account.” It’s a short hop from that to Malcolm Tucker’s foul summation of Rebecca Front’s MP Nicola Murray on The Thick of It: “You are a fucking omnishambles, that’s what you are. You’re like that coffee machine, you know: ‘from bean to cup, you fuck up.’”

Several generations separate Dickens and Iannucci, but they’re both pointed social chroniclers who rib on people’s innate tendencies and flaws (something even the characters’ names can reflect) in pursuit of larger truths about the times and the cultures we all inhabit. Up until now, Iannucci has assumed the role of a we’re-all-fucked pessimist, albeit of a blisteringly funny sort. Though it doesn’t lack spiky edges, David Copperfield is the first time Iannucci revels, unexpectedly, in optimism. The final shot in the film, of a writer at his desk, pen scratching at paper, is particularly indelible, suggesting that, whether we end up the hero of our own tales or not, there’s always more to be written, many more stories to tell.

Review: A Girl Missing Is an Ambitious Art Object Leeched of Humanity

Review: The Whistlers Is a Clever, Funny, Reference-Rich Crime Caper