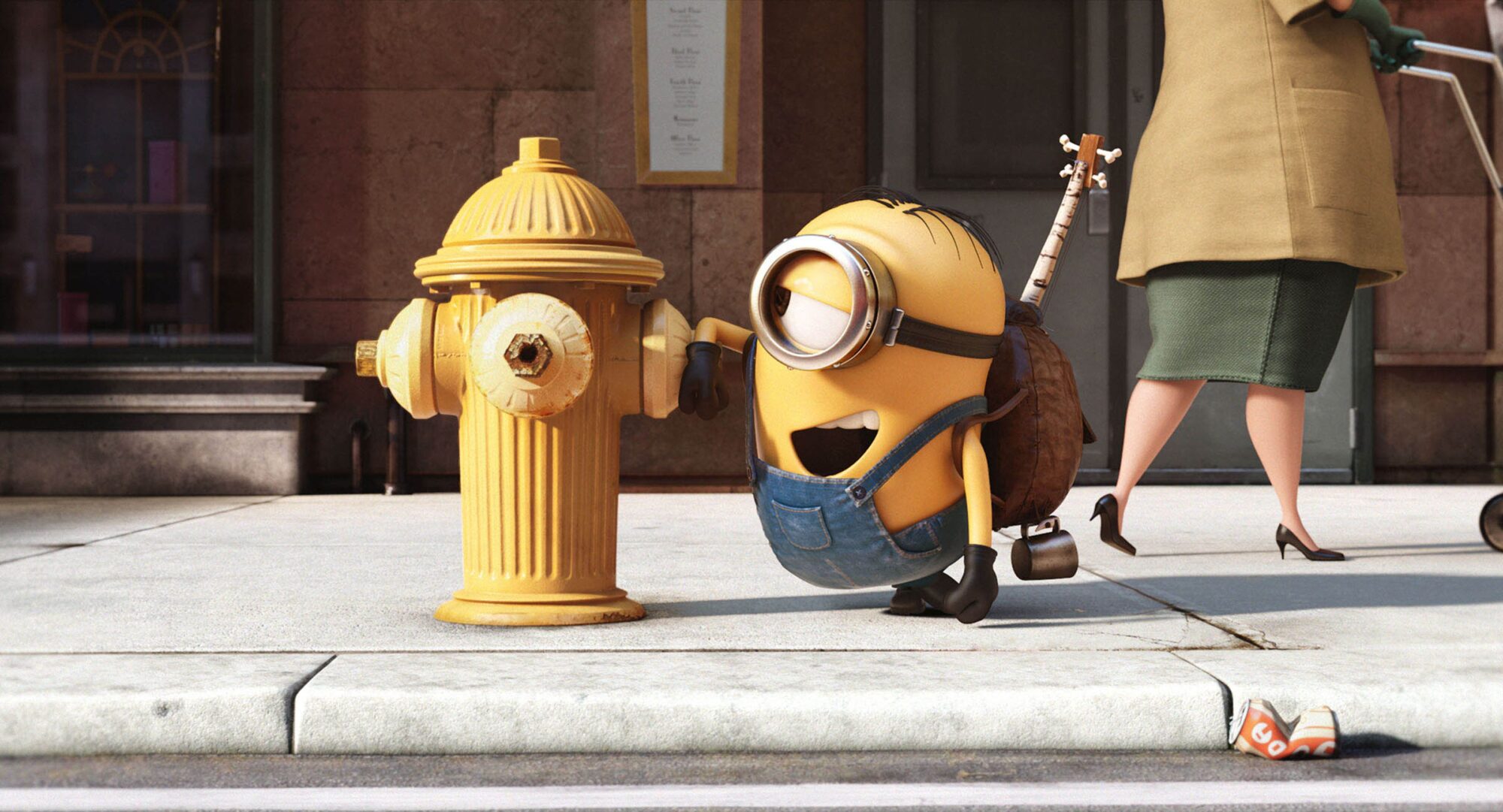 Almost admirably inconsequential, Minions is to the dreadfully stilted first two Despicable Me films what Tex Avery, Chuck Jones, and Frank Tashlin’s Warner Bros. shorts were to Disney’s early Silly Symphonies. Or at least it could’ve been, had the powers that be allowed the filmmakers to fully embrace the goofy frivolity that the original franchise’s indefatigable supporting jesters embody. (Disposable Me?) The Minions are, of course, the Nuprin-hued, be-goggled little pill bugs who toil away with irrepressible good humor under their evil overlords. Minions starts by cataloguing their long and disaster-prone path toward achieving that goal of perfect servility, and the endless string of larger-than-life villains undone by their clumsiness, from a T. Rex sent barrel-rolling straight into a lava pit to Napoleon meeting the short end of a cannon. So far so good, an idiot’s guide to history with some of the most entertainingly idiotic animated characters in recent memory, and the promise of a feature-length history-class version of the Louvre sequence in Looney Tunes: Back in Action.

But no, it only takes a few minutes of montage and impishly portentous narration from Geoffrey Rush before Minions turns its back on all but the most fleeting brand of comic anarchy. Having been expatriated to the Antarctic, the despairing Minions make one last effort to find their designated supervillain. Three of them—Kevin, Stuart, and Bob, all virtually indistinguishable aside from the fact that the teddy-carrying Bob seems to be a few years younger or dumber than his companions—venture out into the world, circa 1965. (The music supervisor responsible for assembling the no-expense-spared soundtrack, packed with the Beatles, the Who, the Turtles, and the Monkees, seems to be the one in the movie’s driver’s seat throughout.)

Because duh, ‘60s, the Minions end up in swinging London at the beck and call of Jean-Shrimpton-bouffant-sporting Scarlet Overkill (Sandra Bullock). Her mission: to steal Queen Elizabeth’s crown. The movie’s mission: to utterly domesticate the Minions and shoehorn them into a clumsy heist plot. To creator and voiceover whiz Pierre Coffin’s credit, the movie never fully hands the reins over to the guest stars, who also include Jon Hamm as Scarlet’s Q-esque gadget-building husband and Jennifer Saunders as a younger but still not-young Elizabeth. And unlike its antecedents, the spinoff at least steers its tone clear of unearned pathos or, worse, viable life lessons. But given that the worst thing about Despicable Me and especially its wishy-washy sequel was how much it deigned to push its clear stars into the background of Felonious Gru’s hopelessly basic domestic drama, it’s a buzzkill to enter the world of Minions primed for a tidal wave of gibberish-talking lemmings to tear the roof off, only to see them once again led astray by the ordinariness of human affairs.

Interview: Mark Christopher on the Director’s Cut of 54