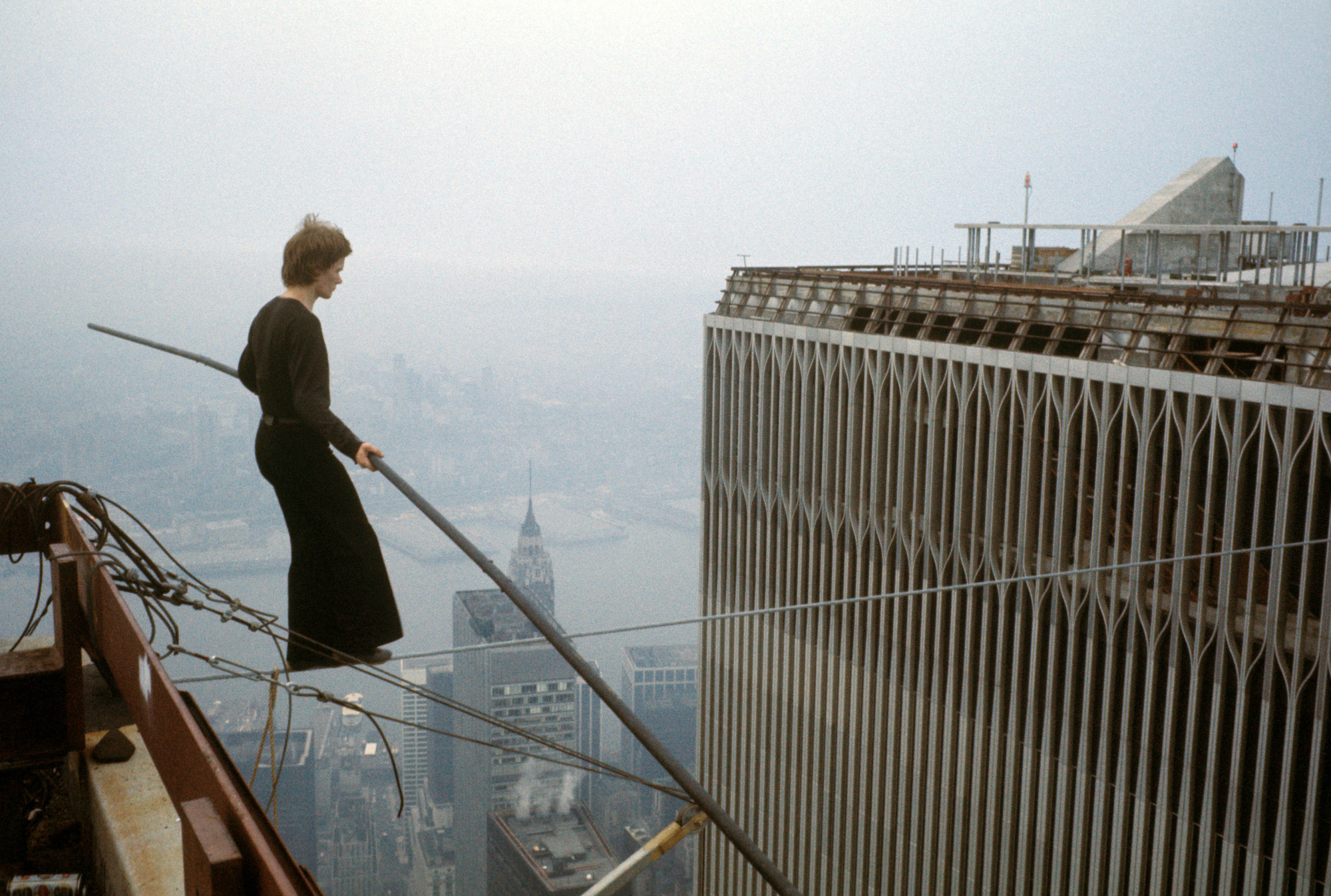 While this is intended to respond to several comments about my earlier post concerning Man on Wire, I would like to start by thanking James Marsh for his genial and interesting responses. He obviously got the spirit of the debate my post was meant provoke. His clarifications prompt me to make some of my own, beginning with a couple about the context in which I wrote my piece.

First, as I alluded to therein, when I came away from my brief encounter with MOW, I turned to the film’s press notes in hopes of finding out why the Nyman/Greenaway music had been used so extensively. Rather than offering an explanation of that use, the notes almost seemed intended to disguise it: Nyman was discussed as the film’s composer without any mention that he had written nothing original for MOW; the individual tracks were listed by their titles without reference to the films in which they previously appeared. One reason I wrote my piece was to let other critics know the actual provenance of the film’s score, which I still believe the press materials should have clarified.

Second, before writing I did a Google search to see what had been written about the film’s use of music. Regrettably, this did not lead me to the Filmmaker Magazine interview with Marsh, which would have obviated my speculation as to the score’s origins. What I did learn, though, was that most reviewers appeared not to know that the Nyman score wasn’t original; and of those who did, none raised an eyebrow at the recycling. Thus the second reason I wrote my piece was to suggest that the practice of borrowing so heavily from other movies’ scores was very much worth discussion.

In retrospect, I regret bringing in the issue of using actors and reenactments in documentaries, as well as the speculation just alluded to. The former is a separate (if obviously related) issue. The latter does not, contrary to Marsh’s suggestion, comprise the basis of my argument; rather, it’s extraneous, a distraction. Without it—or with the origins that Marsh explains—the argument is just the same.

I also realize in looking back that my reaction to the use of the Nyman/Greenaway music combined a very visceral, personal response with a more general aesthetic point. These two perhaps deserve to be disentangled.

The visceral response was reflexive, one might say even say automatic. Marsh (who’s certainly entitled to his own speculations!) imagines that I was looking for such a reaction in order to weigh against the film’s “hype.” Actually I was not aware of any hype. (I don’t mean to suggest that Magnolia’s hype machine wasn’t working overtime. But if it was, its products hadn’t reached me.) On the contrary, I went to the film because I’d heard such good things about it from people whose opinions I trust. I expected I would enjoy it and want to write a favorable review. The musical jolts that catapulted me out of the screening were a surprise, and not a welcome one.

I now see that that this reaction was virtually a solitary one. I’ve long known—and been told by friends—that my feelings about music are often hyper-sensitive if not downright eccentric. The reader who suggested that the critical view expressed in my piece applied only to the person making it was not entirely wrong. Yet I don’t believe an opinion is any less valid for being held by one person rather than the entire audience (critics exist to pit individual perception against mass imperception, after all), especially if it raises or illuminates larger questions.

The question here is whether it’s a good idea for filmmakers to appropriate as their own the original scores of previous movies, especially famous movies with famous scores. My argument is that it’s a bad idea—even if the composer approves and benefits financially, and even if only a tiny percentage of the audience is bothered by the borrowing and objects.

I object, obviously. And I wrote my piece in hopes that MOW will prove to be an unusual case, an exception, rather than the beginning of a noxious trend.

Those readers who noted other examples of scores being recycled added to my perspective on the phenomenon, while also pointing toward a necessary distinction. When Tarantino borrows from Morricone or Wong Kar-wai from Peer Raben (an example that wasn’t mentioned), the move has obvious meaning in the eclectic context of post-modern auteur cinema; it makes a point concerning the filmmaker’s aesthetic precedents and thematic concerns. The use of Nyman in MOW, on the other hand, is more akin to a Beatles song being laid under a Nike commercial; the appropriation is simply for scoring purposes, and by no means justifies the five-dollar appellation “recontextualization,” at least insofar as that term suggests intrinsic artistic intent.

Again, this is partly a personal reaction, and inevitably involves the context and the extent of the borrowing. I recall being irked when Wayne Wang’s first film, Chan Is Missing, swiped a passage from Michel Legrand’s score for Losey’s The Go-Between, but this was petty larceny committed with merciful brevity by an ultra-low budget film.

A far more grievous assault came one day when I walked into the Union Square multiplex and heard a portion of Hans Zimmer’s ravishing score for Terrence Malick’s The Thin Red Line wafting through the air. Looking around, I realized it was coming from a TV monitor playing a trailer for—of all things—Michael Bay’s Pearl Harbor. This was the closest I’ve ever come to violence in a theater lobby, and it galled me for days afterward, to the point that I considered contacting Malick to ask if he was aware of the desecration. (By the time it hit theaters, of course, Pearl Harbor had acquired its own score.)

While in no way meaning to liken Marsh (or any other real filmmaker) to Michael Bay, the jumping-out-of-my-skin reaction I had to the heavy, recurrent use of Nyman’s music in MOW reflects the same intermeshing of reflex and principle. To the publicist who angrily objected to my “review” of MOW: my piece was not a review of the film. I couldn’t review it, because I hadn’t seen it; that was prevented by my reaction to the music. Believe me, I would love to see the film without that constraint, which is why I offer Marsh this less-than-half-joking suggestion: On the DVD, have an audio option where the Nyman borrowings are replaced by something else. It doesn’t matter what—Tchaikovsky or Talking Heads—as long as it’s not another famous film score. I’ll be first in line to buy the DVD.

A final point: Besides not being a review, my previous piece was meant to spur discussion about film music among a very select readership, which is why The House Next Door was the ideal place for it. I would have been extremely reluctant to publish it in the mainstream press for fear of negatively affecting the film’s public reception—and this for reasons, I readily admit, that are far less magnanimous than self-interested.

Which brings us to a fine irony. As a critic whose first film, a feature documentary, is going into release next month, I’m faced with a situation where the poor box office performance of many docs in the past year has led some pundits to predict the imminent demise of the theatrical documentary. Since I wrote my previous piece, MOW has given the lie to that grim forecast by opening in New York to land-office business. No one could be happier than I about that success, and I hope it continues.

I only hope that no one ascribes it to the film’s having borrowed big chunks of its score from earlier movies! Otherwise, we all risk walking into next year’s hit doc and being blindsided by the Overture to Lawrence of Arabia booming from the speakers.

Godfrey Cheshire is a film critic for The Independent Weekly and a filmmaker whose feature, Moving Midway, opens nationally on September 12th.