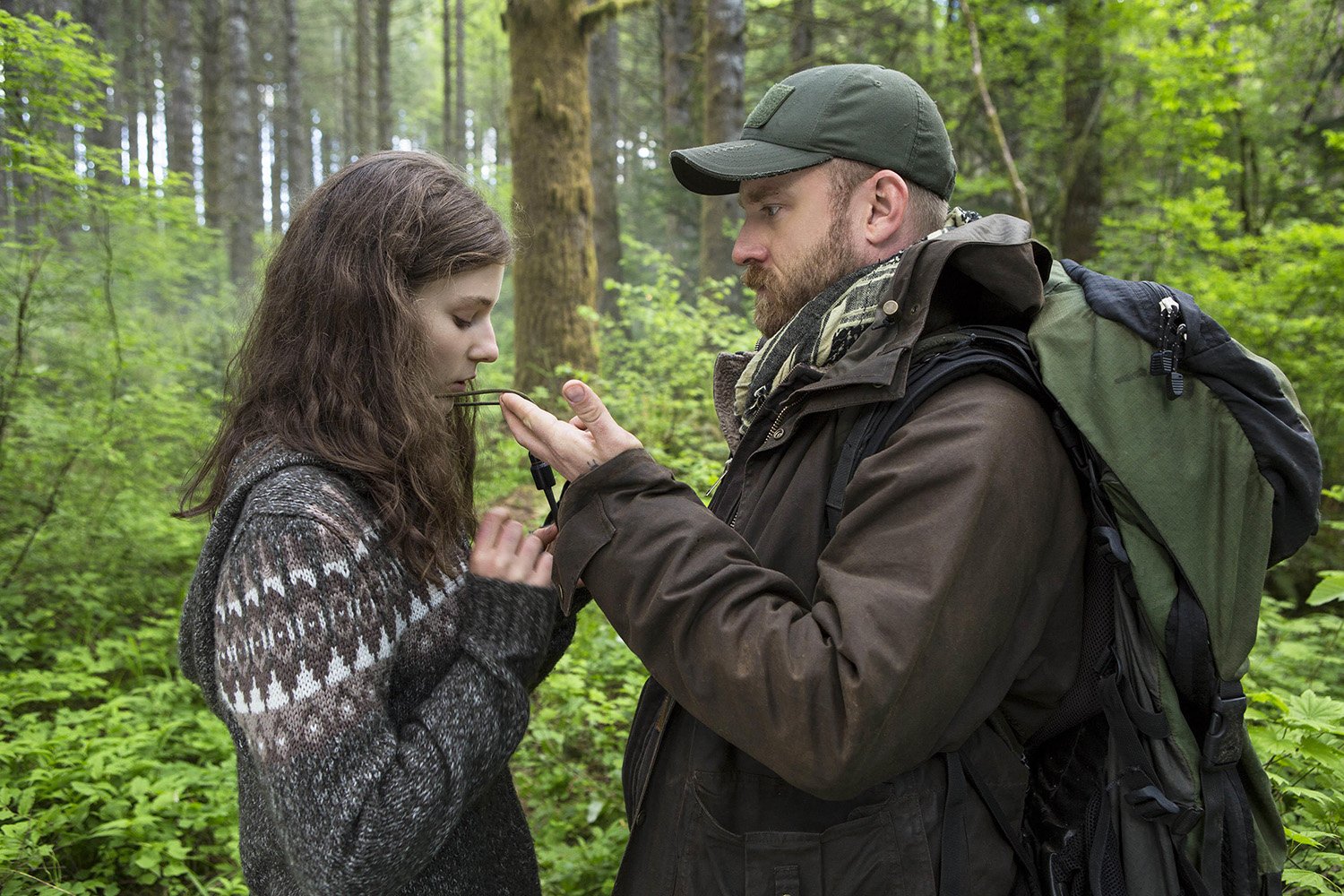 In Leave No Trace, director Debra Granik continues to refine a style of tranquil intensity. The film’s images have a rapt and pared-down power, with emphases that are never quite where you expect them to be. When a construction crew sweeps into Forest Park in Portland, Oregon to destroy a shanty town inhabited by war veterans, the camera surveys an excavator from down low, informing the machine with primordial gravity. Yet Granik doesn’t vilify the machine, regarding it instead with ambiguous awe. The filmmaker extends this empathy to every person, animal, and object in Leave No Trace, outlining an America that lives on the fringes of mainstream culture.

The sobriety of Granik’s vision serves as a conscious respite from the hyperbolic hate machine of modern American culture. There are no Oscar-ready speeches here about America’s hypocritical indifference to its veterans; the film’s lack of sermonizing is the sermon. The wandering camera and transcendental sense of space and time link us to the protagonists: Will (Ben Foster) and his teenage daughter, Tom (Thomasin McKenzie). Living in Forest Park, Will and Tom have elevated austerity into an art form, achieving a communion with their landscape that refutes the destruction wrought against the planet by humankind at large. As Will and Tom march through the forest, foraging for mushrooms and tending their garden, Granik underscores the sway of the bright green trees and the sounds of their footsteps, as well as the reassuring predictability of daily routine. In this primal context, a salted boiled egg, cooked on a fire born of precisely fanned blocks of wood, appears to taste sweeter than a meal at a Zagat-approved restaurant.

Leave No Trace is a knowing fantasy—a parable of America that occasionally suggests a PG-equivalent to David Lynch’s Twin Peaks: The Return. After a long spell in the forest, it’s jarring to see Will and Tom walk into Portland and buy groceries, which proves that they aren’t as detached from society as they believe themselves to be. Granik has a formidable talent for making points without appearing to, burying social riffs within a dense framework of texture, which is to say that formalism and performance often transcend politics. “Need or want?” Tom asks her father as she holds up a candy bar—and an entire relationship and way of life are conveyed in those few syllables. Will’s response is just as telling: “Both.” And he says that word with the pleasure of a father who’s unexpectedly indulging his daughter.

Will isn’t casually self-absorbed, though, but a veteran with untreated PTSD who’s chronically unable to engage with society—a wrinkle that also complicates the appealing portions of Will and Tom’s life away from mass America. In a matter of seconds, Granik communicates the camaraderie enjoyed by the men of the shantytown, who speak clinically of the uselessness of the psychiatric drugs they sell for money to eat. Granik has a similar documentary-like curiosity for a trailer park, a church, and even the social workers who briefly capture Will and Tom. This obsession with infrastructure, whether or not it serves her politics, brings to mind Granik’s lovely, thorny, similarly sentimental documentary Stray Dog, to which Leave No Trace serves as a kind of fictional counterpart.

An irony gives this film its tragic grandeur. Will is too broken to engage even with idealized societies, such as the trailer camp in Washington that he and Tom discover near the end of the film, after a flirtation with “civilized” life that’s rife with sounds that remind Will of war. From the beginning of Leave No Trace, we sense that Will and Tom’s relationship is coming to a head, as this is a coming-of-age story in which Tom must accept that her path is not her father’s. The film’s title gradually attains a litany of resonances as the protagonists drift apart. Will and Tom must “leave no trace” if they’re to evade the country’s bureaucracy, but modern America also prefers that people like Will remain invisible so as to leave our patriotic narrative as devoid of refutation as possible. There’s a global existential connotation as well, as humans leave an apocalyptic trace on the Earth, which is affirmed by Granik’s rhapsodic and mournful filming of horses, bees, and dogs.

Will’s damage has rendered him a good father—to an extent. He treats Tom with respect as a fellow soldier, as he’s invented an existence in which he can parent his child largely without losing his mind. When Will tells Tom to hide and “do it well” Foster gives the line an introverted sense of pride and love that haunts the film. Finally shedding his tick-laden parlor games, Foster comes to life as an actor, connecting with Will and giving him a fearful thickness of being that’s only occasionally leavened by Tom, whom McKenzie invests with the trembling, negotiating intelligence of an unformed prodigy. Will and Tom and Foster and McKenzie’s energies are beautifully in and out of sync, simultaneously. Foster confidently cedes the film to McKenzie, which parallels Will’s gradual relinquishing of authority to Tom. Both characters know that it’s unfair to expect Tom to inherit Will’s alienation, as she has the right to give this potentially doomed society a chance, to fight for it as well as herself. In the film’s heartbreaking climax, a relationship dies so that an individual, and maybe even a society, may be reborn.

Interview: Debra Granik on Leave No Trace and Tuning Into Everyday America