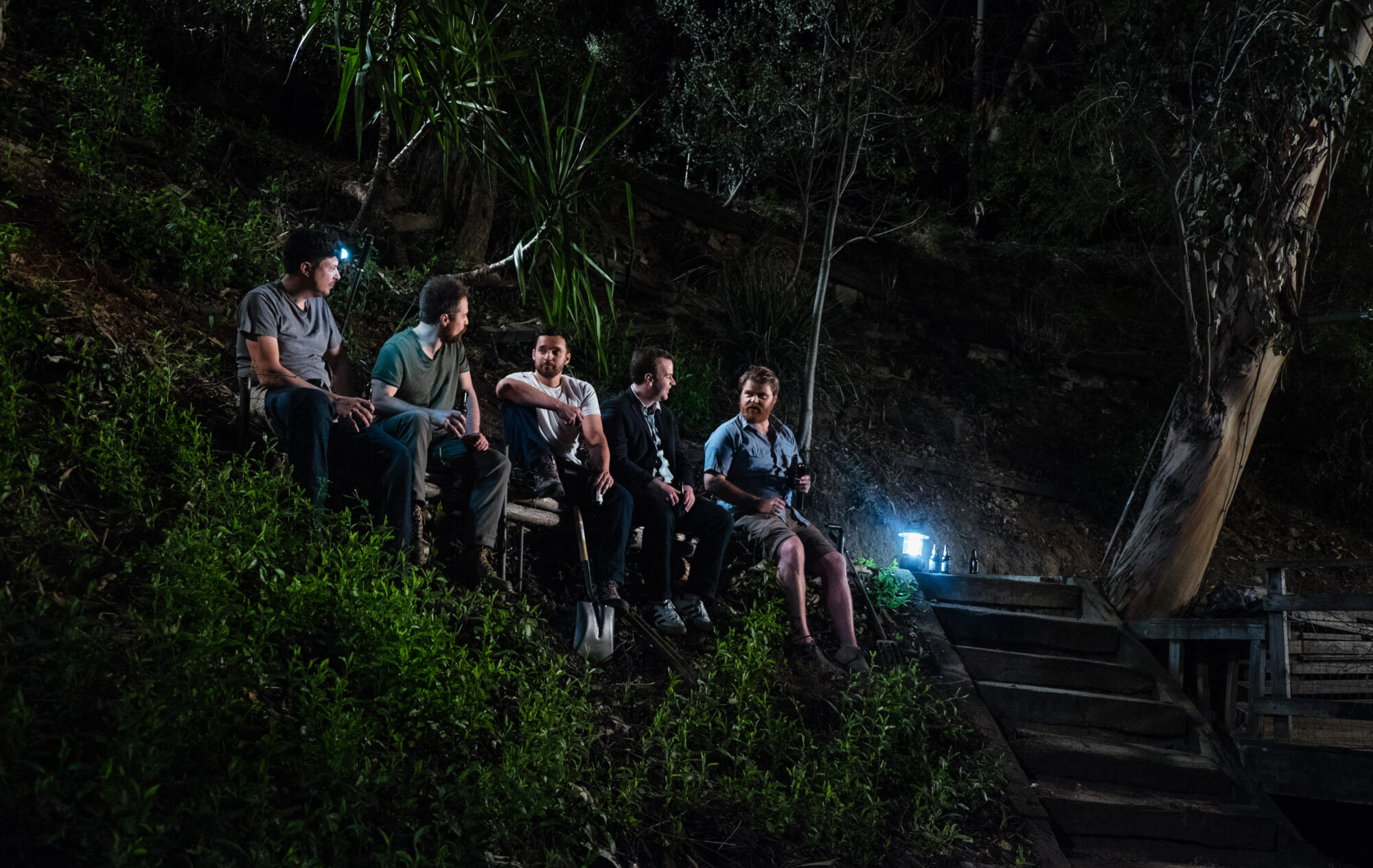 In a manner reminiscent of Woody Allen’s great, under-sung Manhattan Murder Mystery, Digging for Fire utilizes a pulp conceit as a shorthand for the regrets that bubble up in a marriage. Tim (Jake Johnson) is a public school teacher, and his wife, Lee (Rosemarie DeWitt), is a yoga instructor, and both are eking out a living. At the start of the narrative, three developments bring to a head the couple’s attitudes toward their marriage and the decisions they’ve made economically. First, and most importantly, Lee’s wealthy mother and stepfather (Judith Light and Sam Elliott) have offered them money so as to send their young son, Jude (Jude Swanberg), to private pre-school. Tim resents this assistance, of course, for reasons pertaining to class and emasculation that he filters through idealistic liberal platitudes, which appear to bring him less comfort and stability than, presumably, before. We suspect this because of the second development: Tim, Lee, and Jude are briefly staying in the expensive, expansive Los Angeles canyon home of one of Lee’s clients, and, for all of Tim’s routine self-righteousness, he’s comfortable living the good life, with the wooded privacy, the pool, and the chic, glassed-in kitchen and living room. The final development emboldens Tim with an excuse to pick at his wife and her client in equal measure, while enjoying the baubles they’ve brought him: He discovers a gun and a potentially human bone in the rear bank of the property, and is driven to dig for more clues as Lee spirits Jude off to her parents for a break from her disappointment in her husband and his stasis, which is embodied succinctly by the unfiled tax documents that litter the dinner table.

Director Joe Swanberg establishes this elaborate setup in a handful of minutes, the plot serving as a pretext for another of his surveys of people interacting with one another in new habitats. Swanberg’s growing into a more confident stylist with every film, evolving from a maker of consciously crude “mumblecore” movies, which involved the use of shaky digital cameras that presented their subjects in unforgivingly revealing close-ups, to a startlingly elegant fashioner of long takes that document microcosmic societies with casually detailed authority. The filmmaker’s aesthetic has explicitly mutated in tandem with the increasing incomes of his characters. The raw sexual machinations of uncertain, immediately post-collegiate twentysomethings suit Swanberg’s initially lo-fi aesthetic, while the polished long takes mirror the tenuous comfort his characters have grown into as they enter into their 30s and 40s.

Digging for Fire is Swanberg’s L.A. hang-out comedy, a film about people on the margins of a burned-out dream factory that captures how the energies of a small crowd shift and expand or compress with the arrival and departure of each participant. Entrances and exits serve as dramatic, tone-altering choruses and through lines. Tim gets to partying at the house, and a low-key chill-out with his buttoned-down friend, Phil (Mike Birbiglia), turns into a drunken, coked-up backyard digging party with Ray (Sam Rockwell), the leather-coated bad-boy relic of Tim’s twentysomething years who insists on “tarts,” and recommends to Phil that he buy whores if he doesn’t intend to help in solving a potential murder mystery. These scenes serve as remarkably swift and subtle little comic bonbons: Swanberg’s a master orchestrator of glancing grace notes. The film exists as an ever-shifting emotional miasma that’s simultaneously scary, funny, and sexy. Tim and Ray’s friend, Billy T (Chris Messina), arrives at the house with a couple of women, Alicia (Anna Kendrick) and Max (Brie Larson), and the flakey social comedy turns erotic, as encapsulated by the brief, domestic bliss-endangering glimpse of Alicia’s butt as she strips for the pool, or, much later on, by the crime-movie playacting Tim and Max get into as they implicatively explore the possibilities of an affair. Throughout, Swanberg maintains a bracing air of possibility; one senses this movie can turn, on a dime, into anything.

The huge “name” cast is characteristically redefined by Swanberg, collectively and individually. Messina and Orlando Bloom, the latter as a potential hook-up for Lee, are unburdened of their earnest leading-man shackles, revealing new sheens of commandingly aloof charisma. Kendrick and Larson provide a decade’s worth of backstory in simple moments, suggesting boredom and anger with lives spent as gorgeous women at the behest of crazy men. Rockwell’s an exhilarating Tasmanian devil, destabilizing scenes with hilariously frightening and even poignant line inflections. As in Drinking Buddies, Johnson reveals the prickly bitterness underneath his cool, everyman persona. And DeWitt lends the film its ambiguous grace, offering a portrait of potentially qualified love that may nevertheless justify tampering down the temptations to dig one’s house up in the name of probably illusory freedom. (There are many others. Swanberg keeps throwing actors at the audience, marveling us with their newfound sense of ease, no matter how pre-established they are by prior projects.) Like most of Swanberg’s films, Digging for Fire abounds in the poetry of things almost but not quite happening. It’s about chaos knocking forever on the door of insidious nuclear-familial bliss.