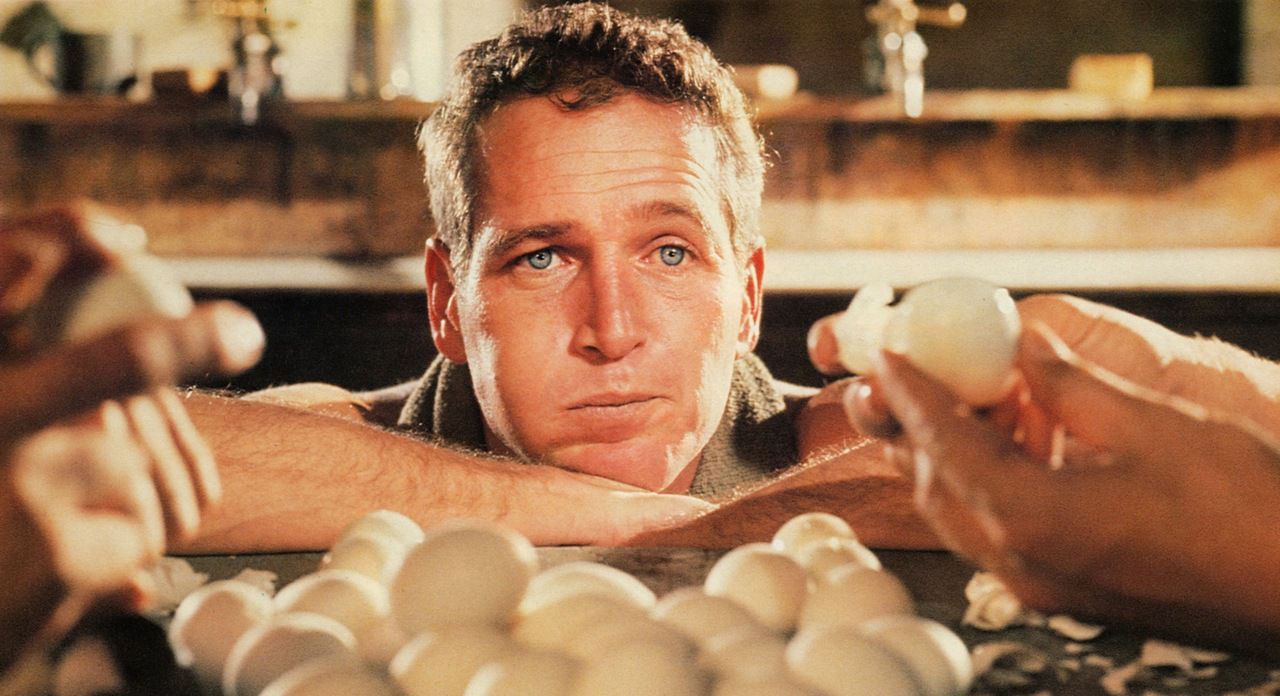 Reconstituting the solitary antihero of the chain-gang picture for the late ‘60s, Cool Hand Luke gave Paul Newman his third iconic role of the decade (following The Hustler and Hud) and a figure he embodies as more Redeemer than movie star. Evolving from laconic, detached enigma—the character is a decorated war hero busted for drunkenly decapitating small-town parking meters—to a doomed individualist fighting the Man’s oppression on behalf of his fellow sinners, Newman’s beauty and post-Method charisma is in the service of a tailor-made scenario (adapted by Donn Pearce from his autobiographical novel, with Frank R. Pierson). Forged into a symbol by his captors’ cruelty, failed escape attempts, and the eventual idolatry of his comrades, Luke is the road-gang prisoner as incarcerated messiah. No wonder he converts bunkhouse alpha-dog Dragline (burly George Kennedy, in an Oscar-winning performance) from a foe who beats Luke bloody in a Pyrrhic grudge fight to a worshipful ally who enthuses over him as “my baby” and “you wild, beautiful thing.”

Making his feature debut, veteran TV director Stuart Rosenberg made his shrewdest gambit in surrounding his lead with a cacophonous, widescreen-stuffing gang of character actors who, inhabiting every type from compulsive bettor to bloodhound wrangler, crowd into the frame with gusto to form a Hawksian community. (Among the soon-to-bes in Luke’s road gang are Dennis Hopper, Anthony Zerbe, Wayne Rogers, Ralph Waite and a guitar-strumming Harry Dean Stanton.) While the convicts’ bunkhouse hardly looks oppressively claustrophobic, hanging bare bulbs and chicken-wire gates notwithstanding, the repetitive early-morning scenes of their weed-whacking roadside labor under rifle-cocking guards bind them as an emasculated tribe in need of the spiritual liberation Luke, incrementally drawn into becoming their champion, makes graspable for the gang and intolerably threatening to the Law. Countering the 1930s social critique of I Am a Fugitive from a Chain Gang with the updated one-against-the-world zeitgeist of its era, Cool Hand Luke makes the naked power of what Luke’s fighting an abstraction: the mirrored shades of a silent guard called the Man With No Eyes (Morgan Woodward), an expert shot who frequently exchanges his cane for a rifle.

That instinct for the abstract (echoed in theaters a few years later by the thematically and structurally similar One Flew Over the Cuckoo’s Nest) nearly undoes the picture. Rosenberg overloads it with Christ-like iconography, most egregiously at the end of the boisterous sequence where Luke attempts to eat 50 hard-boiled eggs to win a bet. After the cash pot has been raucously divvied, an overhead shot finds Newman clad in his underwear, spread on a tabletop in a precise cruciform pose. Such lunges for sanctimony and significance undermine the grit and vernacular naturalism the script occasionally supplies, most indelibly when the reedy-voiced Captain (Strother Martin) who manages the prison, after knocking recaptured fugitive Luke on the head, proclaims, “What we got here is a failure to communicate.” (Newman repeating the line at the film’s climax—when he’s cornered, inevitably, in a church—is mere dilution.)

Newman remains watchable and glamorous throughout, bloody, muddy or coated in torso-flattering sweat, but the film’s efforts to sentimentally “humanize” him by psychological revelation are clumsy. In a lengthy scene as Luke’s dying mother, smoking and propped up in a flatbed truck for a final visit, Jo Van Fleet is valiant but can’t lift the stilted dialogue (“Sometimes I wished people was like dogs”) into reality. While Conrad Hall’s magic-hour cinematography prettifies the road gang’s day into painterly landscapes, and Lalo Schifrin’s dynamic, versatile score lionizes the surge of humanity the prisoners feel when Luke goads them into double-timing a hellish road-tarring job, Cool Hand Luke’s scenario works best in its anecdote-like set pieces, whether ritually cruel or brazenly tinged with burlesque, as when a buxom girl cockteases the prisoners by humping the car she’s washing. The movie’s apparently tacked-on studio ending attempts to dispel downbeat martyrdom with Hollywood sunniness by presenting a montage of Newman smiling. To reverse Martin Scorsese’s joke about his parish priest’s reaction to his filmmaking, Cool Hand Luke’s showbiz gloss is too dressed up for Easter Sunday to make Good Friday as punishing as it needs to be.

Definition of a Cult Classic: The Fall