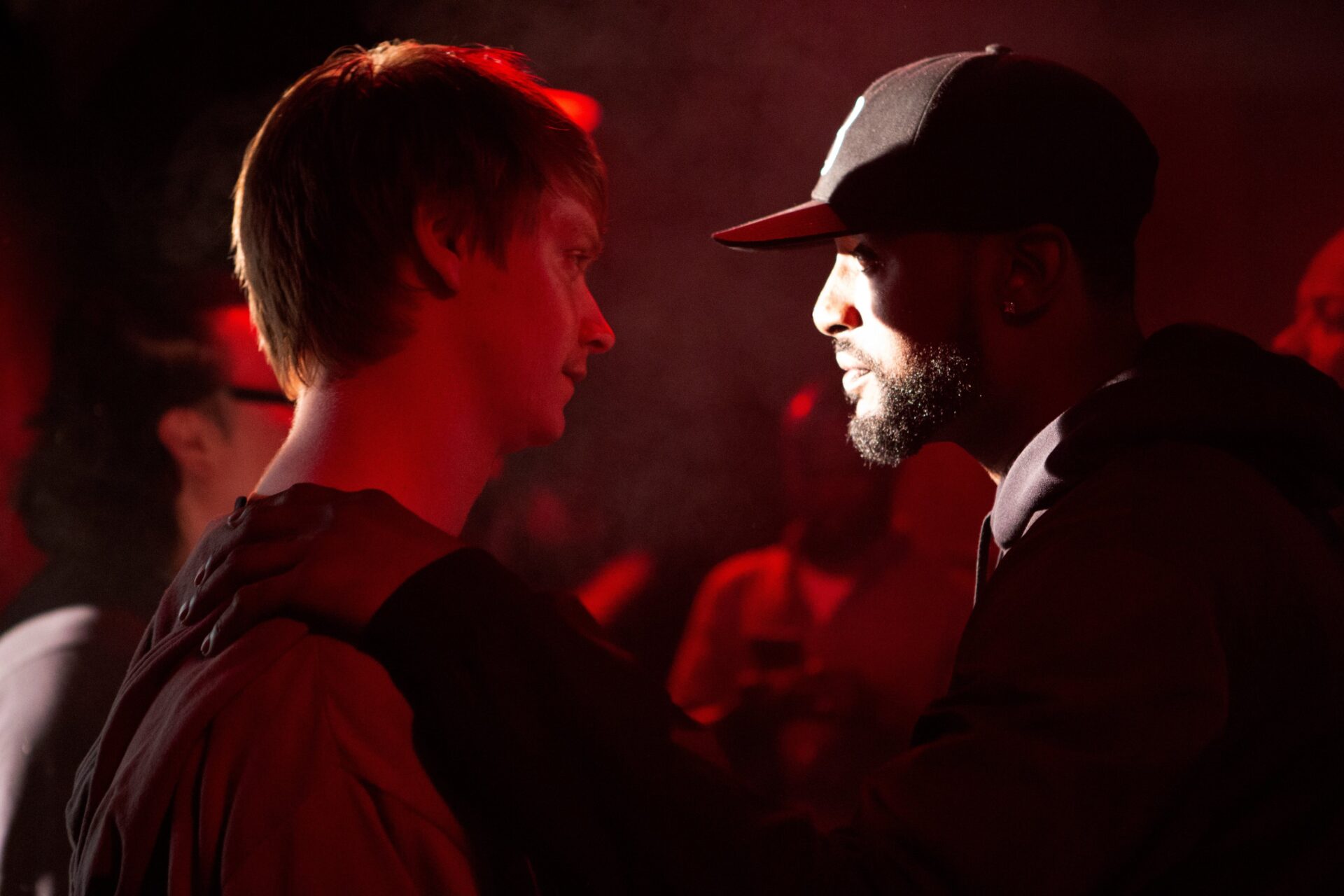 The coldly lit, starkly desaturated rap battle that opens director Joseph Kahn’s Bodied is abruptly turned on its head when the camera, circling the crowd of onlookers inside a grungy garage, lands on twentysomething Adam (Calum Worthy). The graduate student marvels at the rappers’ turns of phrases with visible excitement, explaining their references to his disinterested girlfriend, Maya (Rory Uphold), who huffs at the rappers’ sexism before forcing Adam to justify why he thinks any of this is fun or interesting.

Adam offers clichéd academic defenses of his love of battle rap, praising it as real-time poetry and offering interpretations of the genre’s combination of aesthetic ambition and cultural expression. But embedded in his academic treatise is an obvious love for the mere impact of sharp insults, and when the opportunity arises to square off with one of the lesser wannabes who hangs around the area, Adam begins to unleash devastating rhymes with savant-like brio, cementing himself as an instant legend in the rap underground.

Kahn uses Adam’s sudden entrance into the battle rap scene to stage a satire on political correctness and cultural appropriation. (The idea for Bodied was sparked by the backlash to the perceived colonialist imagery of the filmmaker’s music video for Taylor Swift’s “Wildest Dreams.”) Early on, though, Kahn sketches some of his targets too broadly, particularly his reactionary depiction of campus culture as overrun by tyrannical young thought police, a caricature epitomized by Maya, who sniffs out things to be offended by with the skill of a truffle hog. But Bodied doesn’t reveal the deeper contours of the character, only occasionally catching intriguing glimpses of the obvious prejudice that lies beneath her veneer of unimpeachable wokeness.

Maya’s flimsy characterization stands in sharp contrast to the film’s infinitely richer understanding of Adam, whose own background in academic cultural studies fascinatingly rubs up against his desire to be part of the rap world that he critiques. Adam’s inability to square his academically informed sensitivity with battle rap’s dependence on vulgar taunts plays out as an extended act of second-guessing in which the young man furiously drops racist, homophobic insults into his knotty wordplay and then later attempts to justify himself as participating in the complex expressions of rap.

His attempt to have his cake and eat it too is called out by numerous peers, most saliently by Behn Grymm (Jackie Long), a local battle rap legend and Adam’s de facto mentor, who deduces from their first meeting that Adam’s interest in the n-word as a reclaimed slur in battle rap masks the white boy’s desire to have the cachet to get away with using the word. Of course, Adam’s appropriation of rap is complicated by the fact that he’s genuinely skilled, and the film visualizes the almost ecstatic state that its protagonist enters when he settles into a groove of vicious wordplay with various bursts of animation that visualize words in his rhymes and whipping camera motions that careen away from the rapper’s mouth as if tracking a boxer’s blows.

Kahn has great fun sending up the convoluted ethics of Adam’s involvement in the arena of battle rap. After Adam’s first true battle, with an Asian rapper named Prospek (Dumbfoundead) whom Adam attacks with a stream of racist invective, his opponent sardonically mocks the white kid as a racist while subsequently noting that Adam tailoring his material to Prospek being Korean is “culturally sensitive by battle rap standards.” Nonetheless, both Prospek and Devine White (Shoniqua Shandai), a fearsome competitor who rejects any attempt to be pigeonholed as a female rapper, lament how his race and her gender are constantly exploited for cheap digs by opponents who fall back on such attacks for easy crowd reactions. Prospek and Devine’s frustrations boil over in the film’s arguable high point, a battle in which each rapper reclaims the stereotypes wielded against them. Both rappers prove how reductive such insults are while also crafting far more elaborate, knowing takedowns on the subject of being Asian or a woman than any of their opponents.

Prospek and Devine’s battle marks a pre-climax that illustrates a genuine reclamation of the characters’ selves through their art, but Bodied is at its most incisive when a revelation about Behn’s well-maintained image shatters Adam’s reductive understanding of his friend’s life. The moment brilliantly recasts people’s obsessions with authenticity in art as not the opposite of self-conscious wokeness but the flip side of it. The film’s initial, literally black-and-white divisions of truth and appropriation are torn to shreds, reflecting the insoluble complexity of the subject matter. The anti-P.C. scorn that establishes Adam’s nervous entry into rap gradually becomes a sincere, if hilarious, treatise on the impossibility of reducing art to value judgments.

Interview: Joel Edgerton on the Making of Boy Erased