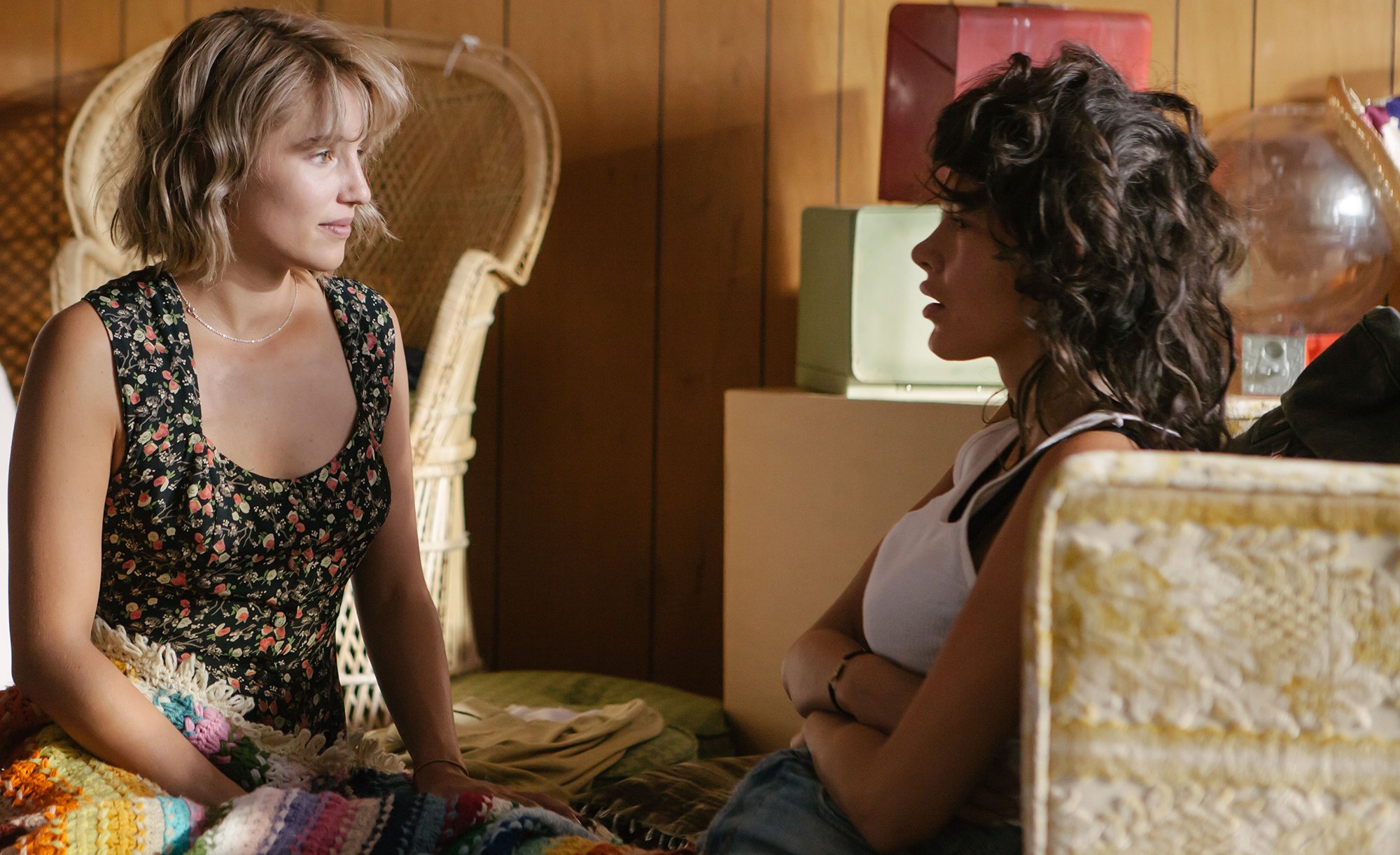 It’s hard to pick the most startling edit in Bare, a film that attempts to strip down desire to its essence, and in a manner that would likely please Stranger by the Lake director Alain Guiraudie. One obvious choice: a bracing cut that takes us from an argument between Pepper (Paz de la Huerta) and her lover, Sarah (Dianna Agron), to a remote quarry where Sarah’s supposed boyfriend, Haden (Chris Zylka), is using empty liquor bottles for target practice.

But just as potent is an edit near the close of the final act, when Sarah, finally exhausted of her friends’ petty, conformist interests, stands up quietly and leaves a baby shower without warning, exiting through the front door and emerging through another, in a different place where the blond heroine will confront another subplot. The baby-shower scene isn’t so much left hanging as it is left precisely where Sarah wants it: in the past.

Bare is a simple movie about quarter-life transition, and the sexual and existential awakenings that typically come with the territory. Yet writer-director Natalia Leite makes the bold, no-brakes choice to let Sarah’s reckless abandon drive the narrative and also the film’s structure and technique.

Languishing in a Nevada desert town, Sarah is utterly morose, her libido scarcely stimulated by Haden. After losing her job, she swings by her estranged father’s shuttered thrift shop and finds Pepper asleep on a couch. Played by de la Huerta with her trademark, spaced-out brand of cool, Pepper becomes the agent for Sarah’s rebirth, and Sarah, ready to shed all shackles of banality, says yes to every one of Pepper’s propositions. The first is a simple road trip to Reno, where Pepper hustles a man in blackjack and steals his money, and the clincher is a nighttime getaway, where the two gals pop peyote and make love in the glow of a pickup’s headlights.

Sarah soaks all of this in as if it were life-giving vapor, begins making wild moves of her own, and Leite, with the aid of cinematographer Tobias Datum’s handheld camera, dutifully follows her on her id-driven journey. It’s hard to recall a recent film that’s felt like such a slave to its protagonist’s will. There’s no wind-up, for instance, to Sarah’s entry into the seedy strip club where Pepper provides the girls with drugs. She strolls through the divey, neon-lit space, and her confused haze is palpable. She creeps into a dressing room and is inexplicably welcomed. She says yes to a bump of coke, lets a stripper paint her with eye shadow, and within moments, she’s on a pole—phase one of a stealth side gig that may just fund a future with the Thelma to her Louise.

That none of these developments feel implausible or episodic is a testament to Leite’s trust in her lead character’s convictions, and also to Agron’s breakthrough here. Never a standout on Glee, or in anything else for that matter, Agron is suddenly inspired to let go and, indeed, bare herself, while portraying a woman whose life becomes defined by surrender. She proves the perfect on-the-prowl foil to de la Huerta’s free spirit.

The events surrounding Bare’s climax threaten to derail the film—or rather, put it on the conventional track it so breezily avoids while chronicling Sarah’s misadventures. It seems inevitable that the proceedings will involve some price-of-hedonism comeuppance, but the tedium with which Leite betrays Sarah’s nervy lead—in favor of melodramatic screenwriting traditions—feels like a crushing blow. Bare’s saving grace is that it ultimately puts Sarah back in the driver’s seat, where, after meeting someone who empowers her to walk toward fear and forget the word “no,” she can remain firmly planted.

Review: The Armor of Light